A Miami-Dade police officer was injured in a shooting Monday, authorities confirmed.

2 hurt, lanes closed after crane hits bucket truck on I-95 in Fort Lauderdale

A crane struck a bucket truck on Interstate 95 in Fort Lauderdale Monday morning, injuring two workers and shutting down the southbound lanes of the highway.

2 hurt, lanes closed after crane hits bucket truck on I-95 in Fort Lauderdale

Hoffman a major key to Panthers' success this season

The 29-year-old is in the prime of his career, coming off a season in which he scored a career high 36 goals and 70 points.

Those are the kind of numbers that get you on the cover of the opening night program, the banners hanging around the BB&T Center and the Panthers billboards around South Florida.

You won't find Hoffman's picture in any of those places.

Even on the Florida Panthers, a team at the bottom of the NHL popularity totem pole, there are several names that go up on the marquee ahead of Hoffman's.

It's all good though, if you ask Hoffman.

The way he sees it, flying under the radar can be a good thing.

"Every team has their top players that get the attention of the opponent," Hoffman explained. "If you're playing against Tampa Bay, you've got to know when (Nikita) Kucherov and (Steven) Stamkos are on the ice, or against Pittsburgh when (Sidney) Crosby or (Evgeni) Malkin are out there, so it's obviously the same with our team. You still need scoring all throughout the lineup so anytime that you can help out and chip in and do your job, obviously that's what I'm here to do."

It's something that Hoffman did very well during his first season with the Panthers, becoming an integral part of the power play; his sharpshooting ability proved to be a perfect fit on the right side of Florida's top unit with the man advantage.

Hoffman ended up finishing fourth in the league with 17 power play goals, nearly all of them coming on laser-like one-timers from the right faceoff circle.

It's something few players can do with the precision and consistency of Hoffman.

From his first days on the ice, he put so much time and effort into his shot that now, it's almost muscle memory.

"When I was younger, I used to work on my shot all the time," Hoffman said. "Now, obviously, as I get older, I still keep it up to date. You can take a few one-timers after practice just to stay sharp."

One thing Hoffman is excited for is the opportunity to play a full season alongside center Vincent Trocheck.

Last year Trocheck was limited to 55 games due to a broken right ankle and admittedly, never got back to playing like his usual self after returning to the lineup in January.

When asked what he enjoys most about skating with Trocheck, Hoffman had no shortage of answers.

"He's a great player, a great two-way center," Hoffman said. "He can skate, he can handle the puck well, he can shoot, he can pass, he does it all. He's obviously somebody that's nice to have on your line."

If the preseason has been any indication, the scoresheet may not be the only place Hoffman makes an impact this season.

From his first shift during the first training camp scrimmage, there has been a noticeable difference in Hoffman's play in the defensive zone.

Pressed over what he may have altered during his summer training regimen to trigger the change, the former fifth round pick was quick to give credit to his new head coach and the defensive system being installed.

"I think everyone, as a whole, has realized that we have to be a lot more aware in the D-zone, so that's our No. 1 goal, to play better in our end," Hoffman said, echoing the words of Panthers head coach Joel Quenneville. "The better we play in our end, the more we'll have the puck, and that will translate into our offense." 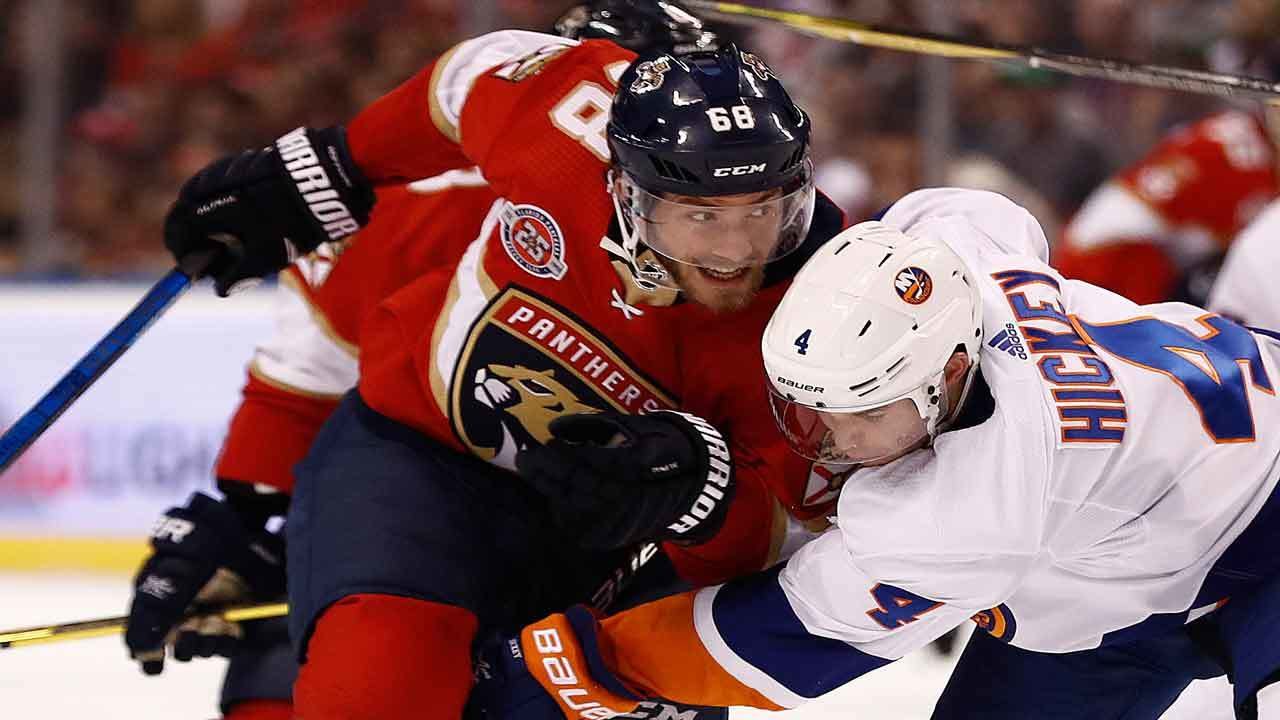 It's more than a little odd for a team's third-leading scorer to not even crack it's top five in most popular or recognizable names.

But that's just where Hoffman, heading into the final year of a four-year, $20.75 million contract, finds himself with the Panthers.

Almost immediately since arriving in Florida back in June of 2018, Hoffman's name has often been the first one mentioned anytime the Panthers pop up in trade discussions.

Last season it was even reported that Hoffman was asked for a list of 10 potential teams that he would waive a no-trade clause to play for.

Obviously none of that came to fruition, and despite the looming threat of being a trade target on an expiring contract, Hoffman still sees a future for himself in South Florida.

"This is a great spot to play hockey, shorts and a T-shirt to the rink every day isn't the worst thing," Hoffman said. "They've got a great group of guys here, a good hockey club and it looks like a good future. I think those are some really important things you want as a player, so it's a positive place to play."