THE LATEST: Coronavirus numbers in my city: Broward, Miami-Dade counties

Coronavirus in Florida: 12,350 cases, with more than half in South Florida

DETROIT – Throughout the years, Detroit has experienced some major highs and lows -- but one thing is constant: The Motor City has always been synonymous with cars and auto manufacturing.

So it should come as no surprise that the city is proud to host the 2017 auto show, more officially known as the North American International Auto Show, at Cobo Center. Can you believe the event has been running since 1907? Safe to say, if you’re only going to check out one auto show this year, Detroit’s will be the one to beat.

The show is open to the public Jan. 14 to Jan. 22 (although, we caught a sneak peek during the media preview). The event gives a nod to Detroit’s automotive past while also looking to the future. Visitors will have the opportunity to scope out the latest vehicles and technologies that will shape the future auto landscape. From muscle to electric and even concept cars, let’s take a look at 13 of the must-see vehicles expected at this year’s show. Some of these are practical, and perhaps you’ll realize what you want to drive next. Others are a bit more elaborate, to say the least. And possibly out of budget. But you can always dream, right?

The Lincoln Navigator concept will be on full display. This vehicle is elegant -- almost like a private jet -- with gull wing doors and concertina steps, according to Lincoln’s website. The SUV has a wide stance and appears to offer a closet-type set-up in the rear of the vehicle. Nearly 800,000 people are expected to attend the auto show before it closes on Jan. 22. You can expect to see this SUV and other concept cars, along with some pretty cool interactive displays. Photo: Bill Pugliano/Getty Images 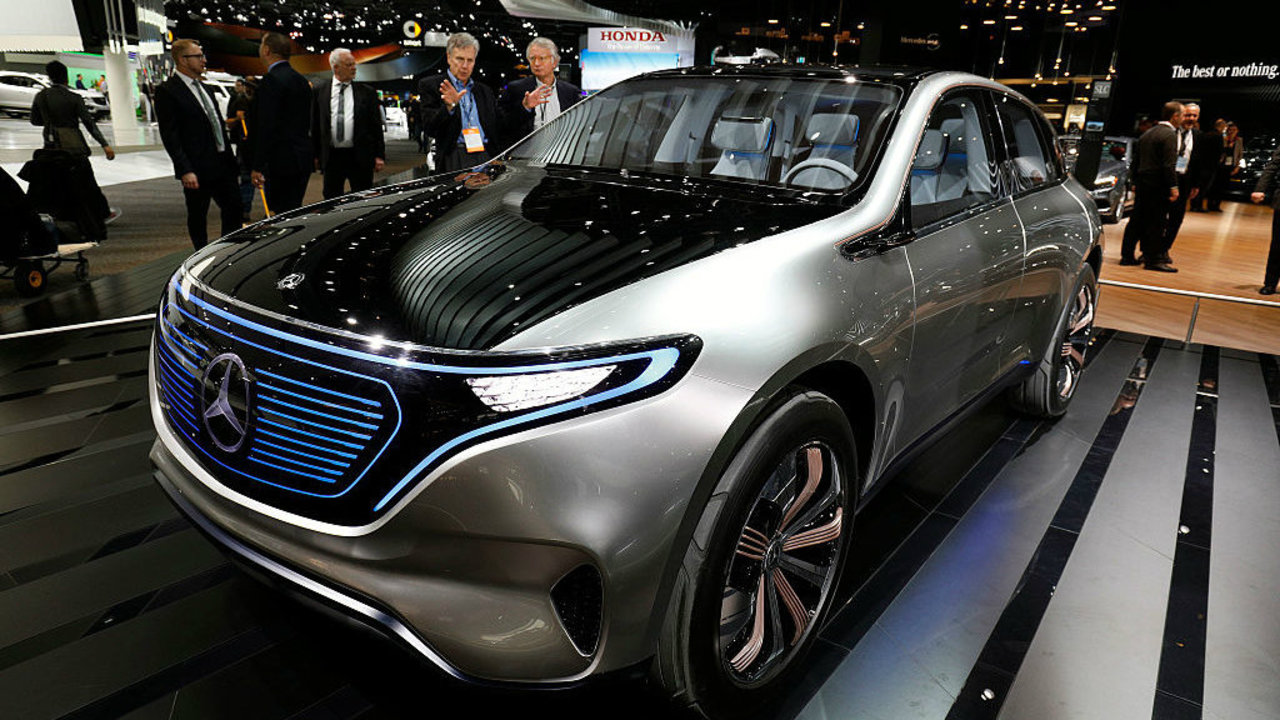 Check out the Mercedes-Benz, if this is more your style. It’s another concept vehicle, so of course, it comes with larger-than-life features and technology. The name EQ stands for "Electric Intelligence," according to the Mercedes-Benz website, which adds that the vehicle, that looks like a sporty SUV coupé, offers a preview of a new generation of cars with battery-electric drives. It has a dynamic exterior design with a new electro-look that underlines the focus on the powerful electric drive system: Two electric motors, with a system output that can be increased to up to 300 kW. Wow! Photo: Bill Pugliano/Getty Images 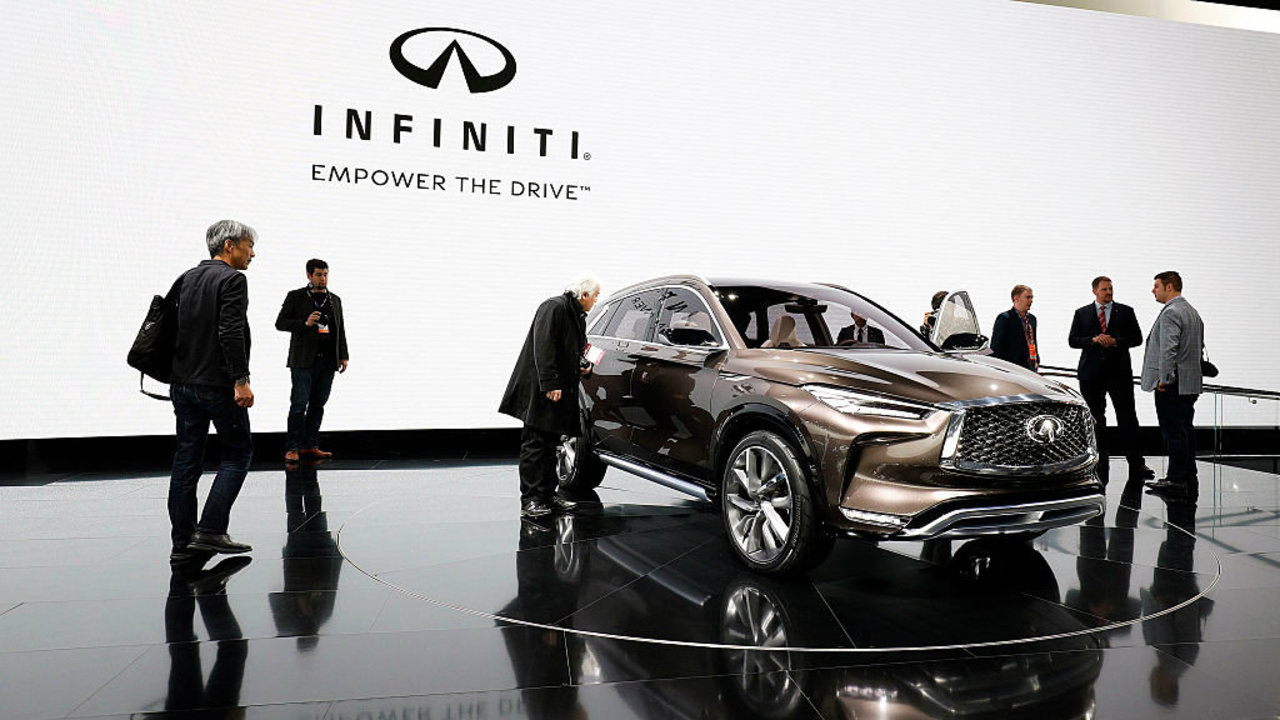 Could the QX50 concept bring some excitement back to Infiniti? The website popularmechanics.com says yes. According to Infiniti, the engine can improve fuel economy up to 27 percent over a V-6, and could prove to be a great alternative to more expensive hybrid and diesel technology. Very cutting-edge! Photo: Bill Pugliano/Getty Images 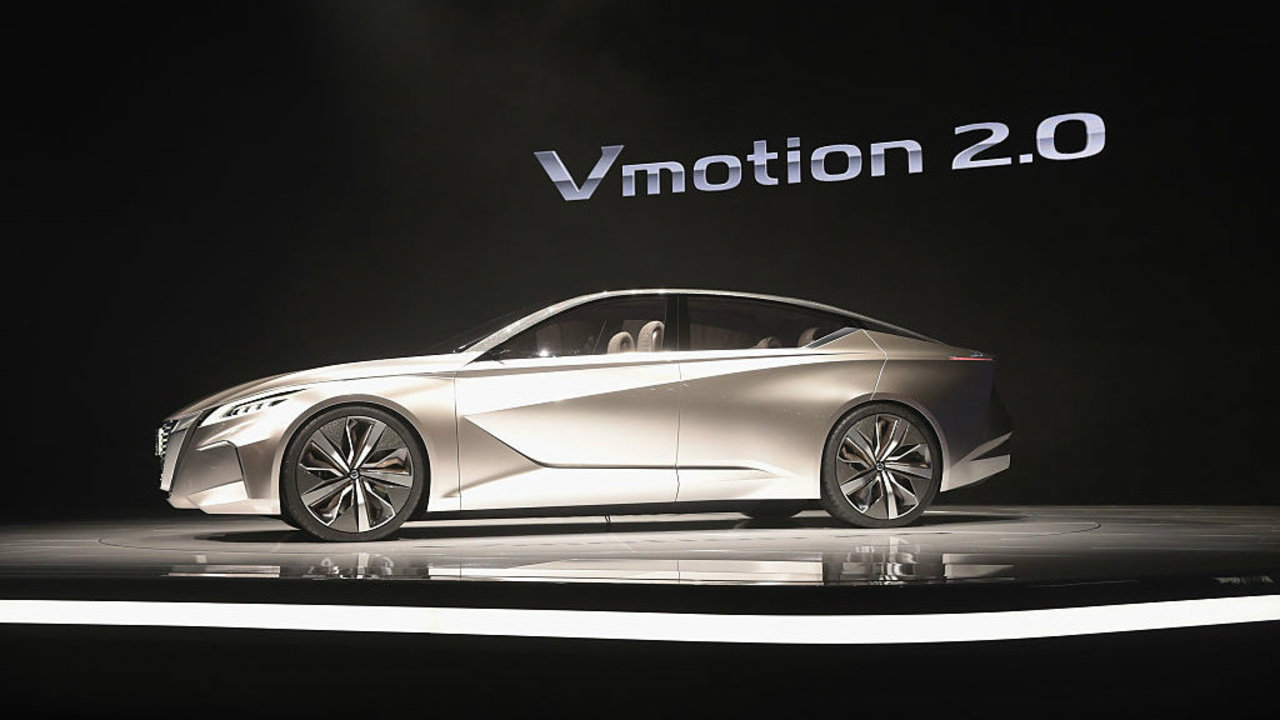 Perhaps the Vmotion 2.0 concept car indicates where Nissan might take its sedan line next. Elements of this car could be spotted on the next-generation Altima and Maxima, for example, according to published reports. The inside of the vehicle features copper paint on the floor, light-colored leather seats, zebrawood trim, a widescreen display and a touchpad in the center console. It appears to be very sleek. Photo: Scott Olson/Getty Images 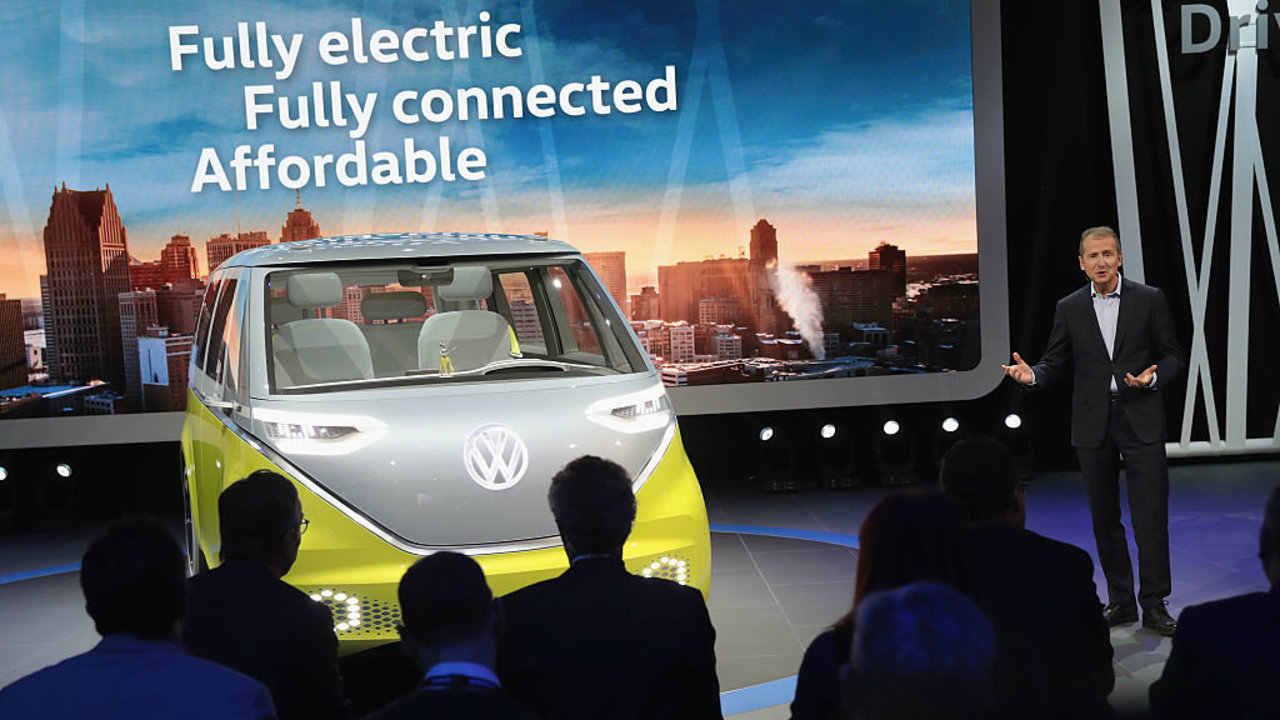 Volkswagen has revived its classic microbus -- conceptually, that is. The ID Buzz is fully electric and fully autonomous. Its range is reported to be 270 miles. The throwback-looking vehicle can seat eight passengers, with seats that swivel and reconfigure to make the inside of the bus feel like a lounge. Groovy! Photo: Scott Olson/Getty Images 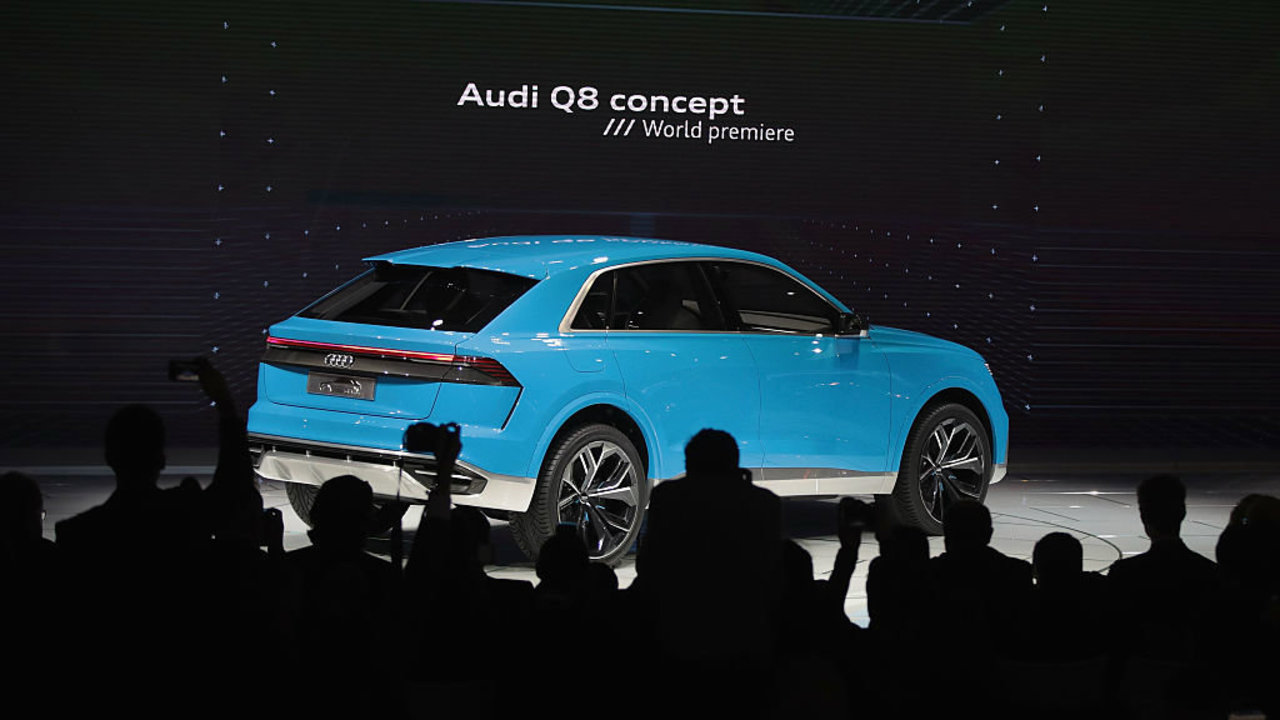 Audi unveiled a concept version of the Q8 SUV hybrid, the latter of which it will roll out in 2018. Audi officials said it will open a new segment for the brand, according to the Associated Press, which reports, “The Q8 is sleek (and) features a downward sloping front end and has as sporty yet elegant look. … (The creator’s) description of the vehicle also can be applied to an Olympic athlete or world-class race horse. ' ... the waistline is very lean and the muscles extremely powerfully defined,' designer Marc Lichte said in an interview in Audi's technology magazine." Looks impressive! Photo: Scott Olson/Getty Images

This vehicle -- the Chip Ganassi Racing Ford GT of Sebastien Bourdais, Joey Hand and Dirk Muller -- is also expected to be at the auto show. It was driven during the Le Mans 24 Hour race at the Circuit de la Sarthe in France last June. Ford reportedly left the car just as dirty and banged up as it was when it crossed the finish line last summer. But that’s pretty cool, right? Among all the spotless, pristine vehicles at the auto show, this guy will definitely stand out. Photo: Ker Robertson/Getty Images 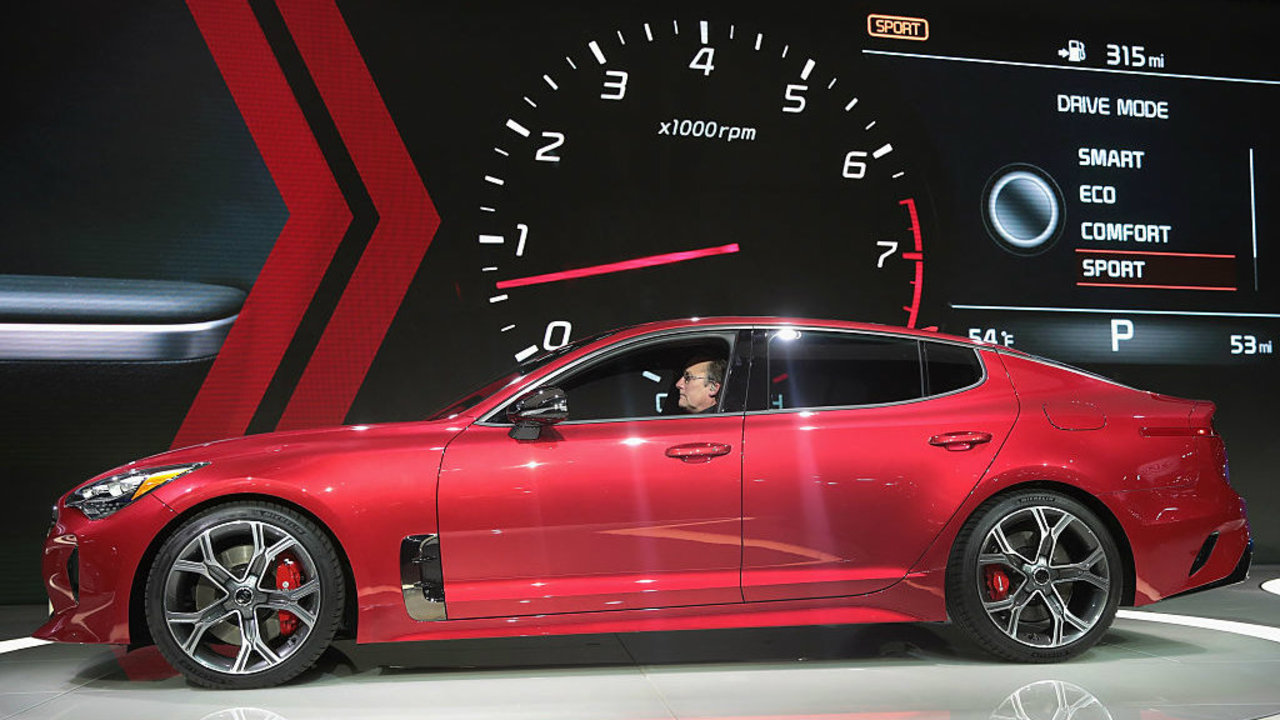 Kia Motors heads into new territory with the Stinger sports sedan, the Associated Press reports. This car -- finally, one that’s feasible to drive someday! -- was designed in Germany and based on Kia 2011 GT concept. The Stinger features the elegant looks of a European fastback, and although engines are still in development, Kia says a turbo-charged 2.0-liter four-cylinder will produce 255 horsepower. An optional 3.3-liter V6 pushes that up to 365 horsepower, the AP said. Kia is targeting a 0-to-62 mph speed in 5.1 seconds. The Stinger goes on sale in late 2017. Pricing hasn't been announced. Keep your fingers crossed it’s in budget! Photo: Scott Olson/Getty Images 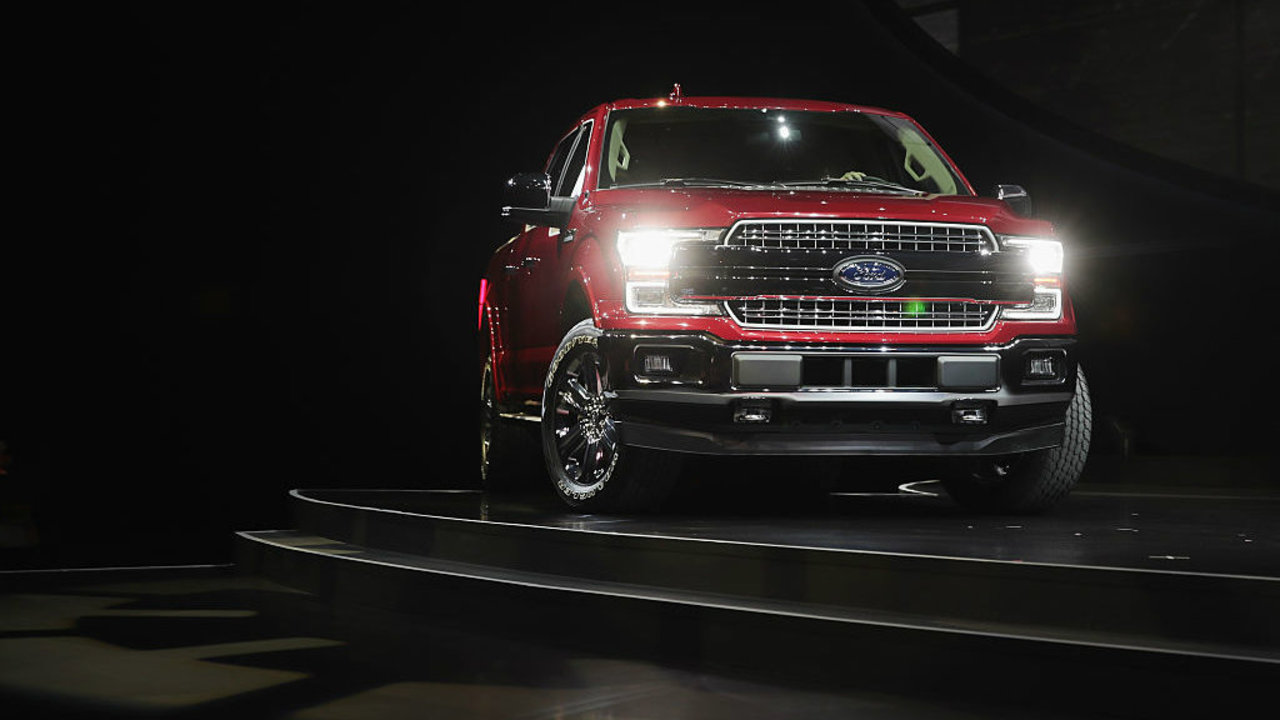 For the first time, Ford is offering a diesel engine with its F-150 pickup, if you’re into that sort of thing. The revamped truck goes on sale this fall. Other new engine choices include a 3.3-liter V6 and a 2.7-liter EcoBoost V6, according to the AP. The F-150 also comes with several optional safety features, including automatic braking and adaptive cruise control that works in stop-and-go traffic. Very futuristic. Photo: Scott Olson/Getty Images 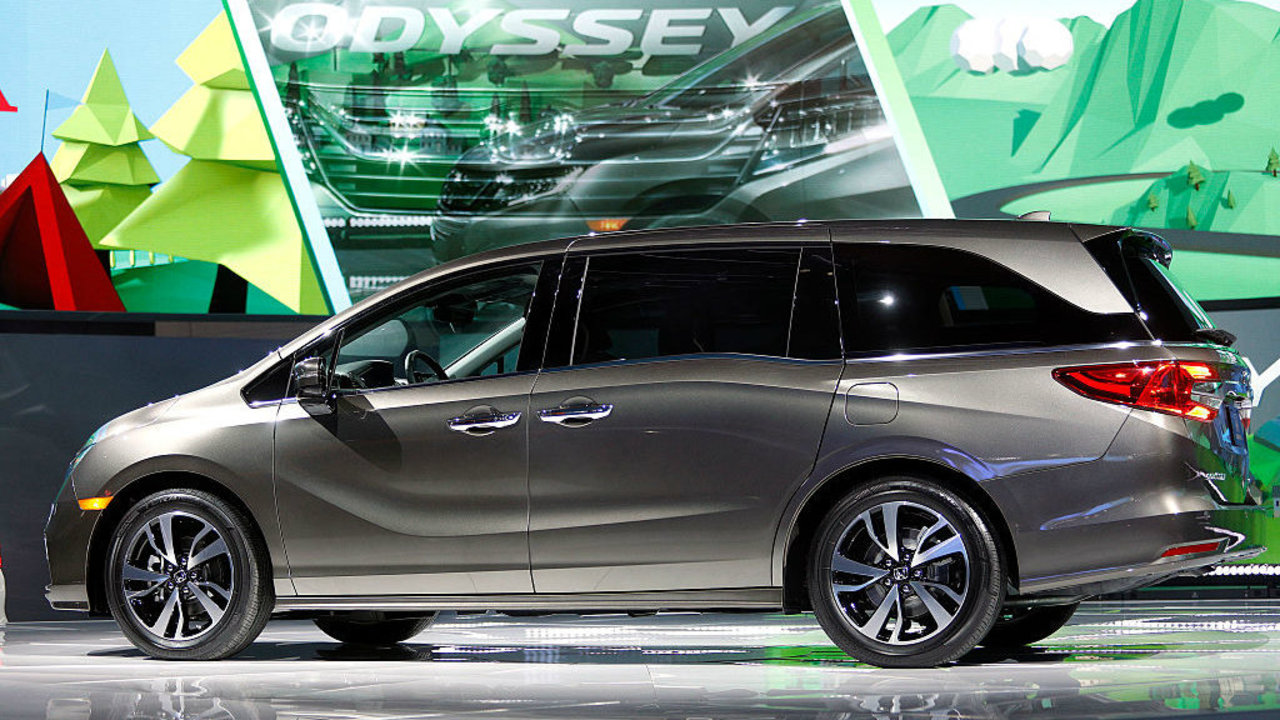 A veteran player in the scrappy minivan segment is getting a major upgrade, the AP reports. Honda is unveiling a sleeker 2018 Odyssey -- for its first extensive makeover since 2011, featuring a range of design and technology updates. Honda calls its flexible second-row advancements the "Magic Slide," and promises seats that can easily move forward, together or apart from other seats and rows. Technology upgrades get equal billing, the AP says. Those upgrades include systems to talk to and keep tabs on passengers, and apps for tracking a road-trip's progress as well as controlling rear entertainment and temperature systems. Pretty cool for a minivan! Photo: Bill Pugliano/Getty Images

Lexus introduced its LS flagship at the Detroit auto show in 1989. On Monday, it unveiled the latest version: a 2018 LS that’s longer, lower and wider than its predecessor. It also weighs 200 pounds less, thanks to greater use of lightweight materials. Under the hood is a new, 415-horsepower turbo-charged V6, according to the AP. Other new features include a system that will automatically brake and steer away from obstacles, and seats that provide passengers with Shiatsu massages (yes, you read that correctly). The LS goes on sale at the end of 2017. Photo: Bill Pugliano/Getty Images

General Motors went small when it started revamping its aging midsize people-hauling SUVs last year with the GMC Acadia, the AP said. But GM opted to go bigger once again with the Acadia sibling, the Chevy Traverse. The company says Chevrolet buyers want more space, so the Traverse will seat up to eight and offer even more cargo room. The vehicle comes standard with a new 3.6-liter V6 engine and nine-speed automatic transmission. A 2-liter turbo four is available. Lots of options here for large families! Photo: Bill Pugliano/Getty Images

A new GMC Terrain small SUV shows off sleeker looks and smaller engines, including 1.5-liter and 2-liter turbo-charged four cylinders with nine-speed transmissions. There's also a diesel option. This new second-generation model is stylish, and it’s expected to have great fuel economy and performance. The Terrain goes on sale this summer, if you’re in the market for a cool new SUV. Photo: Bill Pugliano/Getty Images

There you have it. Whether you’re into high-performance supercars or full-size trucks, the North American International Auto Show will likely have something you can ogle. More than 750 vehicles will be on display. Be sure to stop by if you’re local, and even if you’re not, maybe all these glamorous cars have you considering a little weekend getaway for next year. We can’t promise it’ll be warm in Detroit, but the show certainly does look worth it.

All other quiz photos: Getty Images