Police officer shot at during crash investigation in Davie

Betty Chapman, advocate for Miami's homeless, is dead at 98

MIAMI – Monica Blair was 19 years old when she walked into a homeless shelter in downtown Miami with her 4-year-old daughter, Jeronica. She felt alone, but she wasn't. She just she didn't know that Betty Chapman had worked hard with her husband to make sure that wasn't the case.

Years later, Blair has a successful career in law enforcement and is a real estate investor. She not only believes she and Jeronica will never be homeless again, she is also doing what she can to help those who are.

Blair makes regular financial contributions to help the people who are using the 800 beds at the Chapman Partnership shelters in downtown Miami and Homestead. She said she is forever in debt for what Chapman did to help her and her daughter.

"They provided comfort, food and safety, plus the staff was great," Blair said. "They worked with me to obtain housing and financially assisted me with my next journey in my life. My family was not there for me and Chapman Partnership was."

Chapman, an influential philanthropist who, with her husband, took on scores of tasks in civic causes in South Florida, including fundraising to help the poor and the homeless, died on Feb. 20 in Coconut Grove. She was 98. Her last request for those who attended her memorial service Wednesday at the First United Methodist Church of Coral Gables was to continue supporting the Chapman Partnership.

Her grandson, Aubrey Webb, a Coral Gables attorney, former Miami-Dade State Attorney's Office prosecutor and U.S. Navy Reserve seaman, said his grandmother showed others unconditional love and it is that "love and example of true Christian faith" that will always be with him.

"She embodied the meaning of kindness," said Howard Rubin, the chief financial officer of Chapman Partnership. "Her selfless spirit made a difference in the lives of so many and served as a constant reminder of our mission."

Chapman believed it was important to empower residents with dignity. Architect Robert E. Chisholm, the former chairman of Chapman Partnership, remembers her as a woman who "was very conscious that mind, body and spirit are the three-legged components for any stool to stand."

This is why, Chisholm said, the homeless shelters include a nondenominational worship center where those in need can "interact with others in matters beyond the immediate situation and of possible horizons of renewed and strengthened hope."

Chapman was born on Sept. 15, 1920, in Macon, Georgia. She attended Arlington Hall Junior College for Girls, one of the first postsecondary women's educational institutions established in the Washington, D.C., area, and she earned a bachelor's degree in sociology from the University of Georgia.

As a member of the Phi Mu Sorority, a fraternity organization for women founded in her hometown in 1852, Chapman helped to raise funds for the Children's Miracle Network Hospitals. A blind date changed her life. She fell in love with Alvah Herman Chapman Jr., who graduated from The Citadel, The Military College of South Carolina, in 1942.

The couple wed March 22, 1943, as World War II was raging. He enlisted in the U.S. Army Air Corps and served as a B-17 bomber pilot, naming his aircraft, the "Battlin' Betty." He credited her prayers for his survival during a dangerous Big Week mission to destroy Nazi targets in Leipzig.

As they approached Amsterdam, two enemy ME-109s moved in for the kill, but they blazed them away. The throttle controls were rendered useless, and the breaks and flaps took a severe splintering, yet Chapman was able to land safely on an English farm in Raydon.

About two months later, the Germans shot down the famous "Battlin' Betty." He wasn't the pilot.

Then-Maj. Chapman returned to Georgia to join the family business, R.W. Page Corporation, which operated newspapers. The couple moved to Florida when he became general manager of the St. Petersburg Times in 1953, and they moved to Miami when he joined Knight Newspapers Inc. in 1960.

With Betty Chapman's support, Alvah Chapman moved quickly up the ranks. He was chief executive officer from 1976 to 1989. He introduced computers at Knight Ridder and she learned how to use theirs at the home office. After his retirement in 2000, the Chapmans focused on public service.

During an interview with Local 10 News anchor Laurie Jennings in 2015, Betty Chapman said a 34-week Bible study gave them a new sense of direction.

"At the end, the last day, they said, 'Well now that we have completed the course, how do you think you can serve the Lord?' And Alvah was the first one to speak up. He said, 'I want to use my leadership skills to help the homeless,'" she said, adding that she signed herself up as "his helper because that's what I had always been."

Betty Chapman was busy. Former Gov. Lawton Chiles asked her husband to chair the Governor’s Commission on Homeless. When Hurricane Andrew struck in 1992, former President George H.W. Bush asked him to help with the rebuilding effort and to lead the Community Anti-Drug Coalitions of America.

She said they didn't want to just feed the homeless and have a place for them to sleep. They both wanted to create a comprehensive system to rehabilitate them. That meant investing in the residents' education and health care.

"We wanted them to move on to a better way of life," she said.

The Community Partnership for the Homeless, now the Chapman Partnership, incorporated in 1993. The Chapmans were also a part of a $2 billion downtown Miami renewal project and they worked as a team. Their vision continues to inspire Symeria T. Hudson, the president of Chapman Partnership.

"We are proud to honor their memory each day by helping to empower the homeless in our community," Hudson said.

The Chapmans also supported the Miami Coalition for a Drug-Free Community, Goodwill Industries of South Florida, the United Way, Miami Citizens Against Crime, the Greater Miami Chamber of Commerce, the Miami Performing Arts Center, the Florida Philharmonic Orchestra and the Orange Bowl Committee.

They also invested in Florida International University and Miami Dade College. The university named its student plaza the Betty B. Chapman Plaza and the college named its main conference room, the Betty and Alvah Chapman Conference Center.

Betty Chapman continued to work even after her husband died on Christmas Day 2008. She was the 2013 recipient of the Miami-Dade County Homeless Trust's Change Agent Award and the 2015 recipient of the Chapman Partnership's Alvah H. Chapman Jr. Humanitarian Award.

This week, Madison Webb, Chapman's 20-year-old great-granddaughter, said she was learning more about her through pictures and stories. Betty Chapman, she said, set the highest example of Christian womanhood.

"I feel as though she has instilled in me the values that she held so dearly during her lifetime," Madison Webb said. "I know she will always be with me and her legacy will continue on for generations to come." 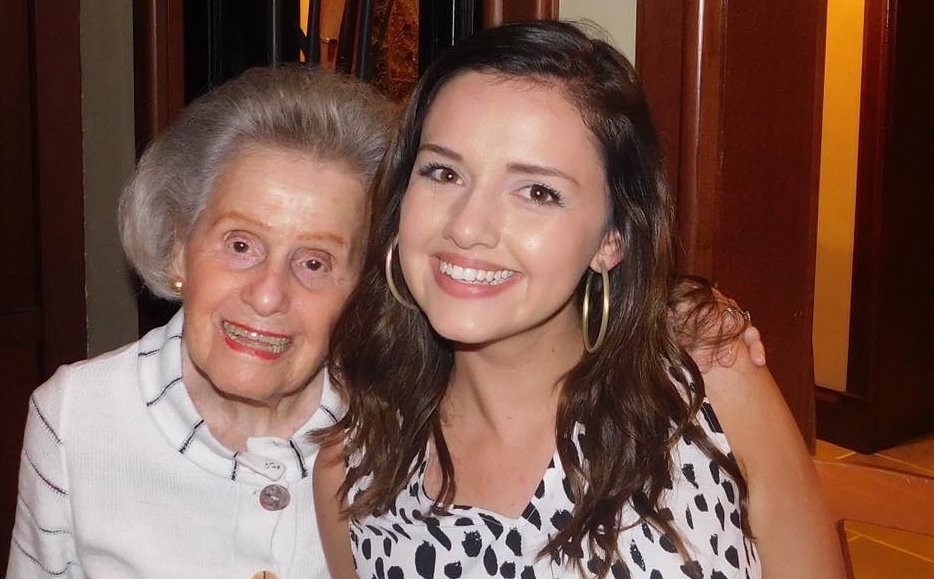