After year of mom's cancer treatment, family is ready to celebrate

A day before Thanksgiving 2016, Claudia Garcia learned there was a cancerous tumor threatening to take her away from her family. The 42-year-old mother of two worked as a pediatric nurse. She didn't want her anguish to ruin the holiday season, so she kept the life-changing diagnosis a secret.

Her 11-year-old son Ryan said he suspected something was wrong. He noticed his parents were whispering and looked worried. After the holiday season, his parents told him they needed to talk to him and his teenage sister. He was sitting on the couch. His feet were barely touching the ground.

When they told him mom was sick, he said he felt like there was "an explosion." It was destructive like the ones he sees in his LEGO Ninjago video game. But he looked at his teenage sister, and at his parents, and they were all calm. He didn't cry.

"It was very scary," Ryan said.

This holiday season, the Pinecrest Preparatory Academy student said he was grateful. After surgery and chemotherapy, his mom was smiling a bit more. Her hair was growing. He saw his father's strength in action when he kept up with all of his mom's duties -- except for cooking. He said he was grateful his family and neighbors helped with that.

His sister, Isabella, said her mom is the first person she goes to when she has a problem, so dealing with her breast cancer diagnosis was scary. The doctors at the University of Miami Sylvester Comprehensive Cancer Center were doing their best to save her life with chemotherapy, surgery and radiation therapy.

"Claudia received intensity modulated radiation therapy," Dr. Anesa Ahamad, her radiation oncologist, said about a treatment that can form precise shapes to beam a high dose of radiation to a specific area.

When Garcia postponed her 2015 mammogram, she said, she was juggling working at the Nicklaus Children's Hospital and family. After a 2016 mammogram and a biopsy, she learned a tumor in her breast was feeding on estrogen and progesterone hormones. The cancer cells had reached the lymphatic system, but not organs.

"I was so busy and I didn't think it could happen in my 40s, and despite everything I know from working in the medical field, I thought that was for women in their 50s," Garcia said. "I have the best doctors and I am so thankful. I started to meditate with an app, and dealing with breast cancer has renewed both our faith in science and God."

Garcia is among the thousands of patients who are participating in the PALLAS clinical trial, which Singerland says is testing the benefit of "a new targeted therapy along with standard endocrine therapy to prevent cancer recurrence."

Ryan and Isabella aren't following the details of their mom's treatment. They are doing their best to stay focused on school, but coping with not knowing can be challenging. While playing volleyball and baking were both enjoyable distractions, Isabella said her mom told her she needed to rely on God more.

There was so much the Garcia family couldn't control this year. Isabella said going to St. Louis Catholic Church in Pinecrest to be with her uncles, aunts and cousins was comforting. She now prays regularly. This Thanksgiving, she said, she was also grateful for the support of her friends.

"Being able to talk to someone, that made it easier to deal with the tragedy," the 15-year-old student said.

Ryan and Isabella said their dad really stepped up his game this year. Claudia Garcia agrees. They said Sergio Garcia, 44, didn't let anything slip through the cracks at their home in Kendale Lakes.

"Cancer isn't easy. You need your family, your community, and you need to take care of yourself so you can be there for your family," the busy father said. "I started a walking club in the neighborhood. I have learned to take deep breaths. The holiday season is the best time of the year and last year, I didn't understand why this was happening to us. "

In between her chemotherapy and her surgery, the family celebrated Ryan's First Holy Communion and Isabella completed her sacrament of Confirmation. The busy father said he learned from a family friend whose wife was diagnosed with leukemia that it was important to stay active. He is now passing along what he learned to a cousin whose wife was recently diagnosed with cancer. 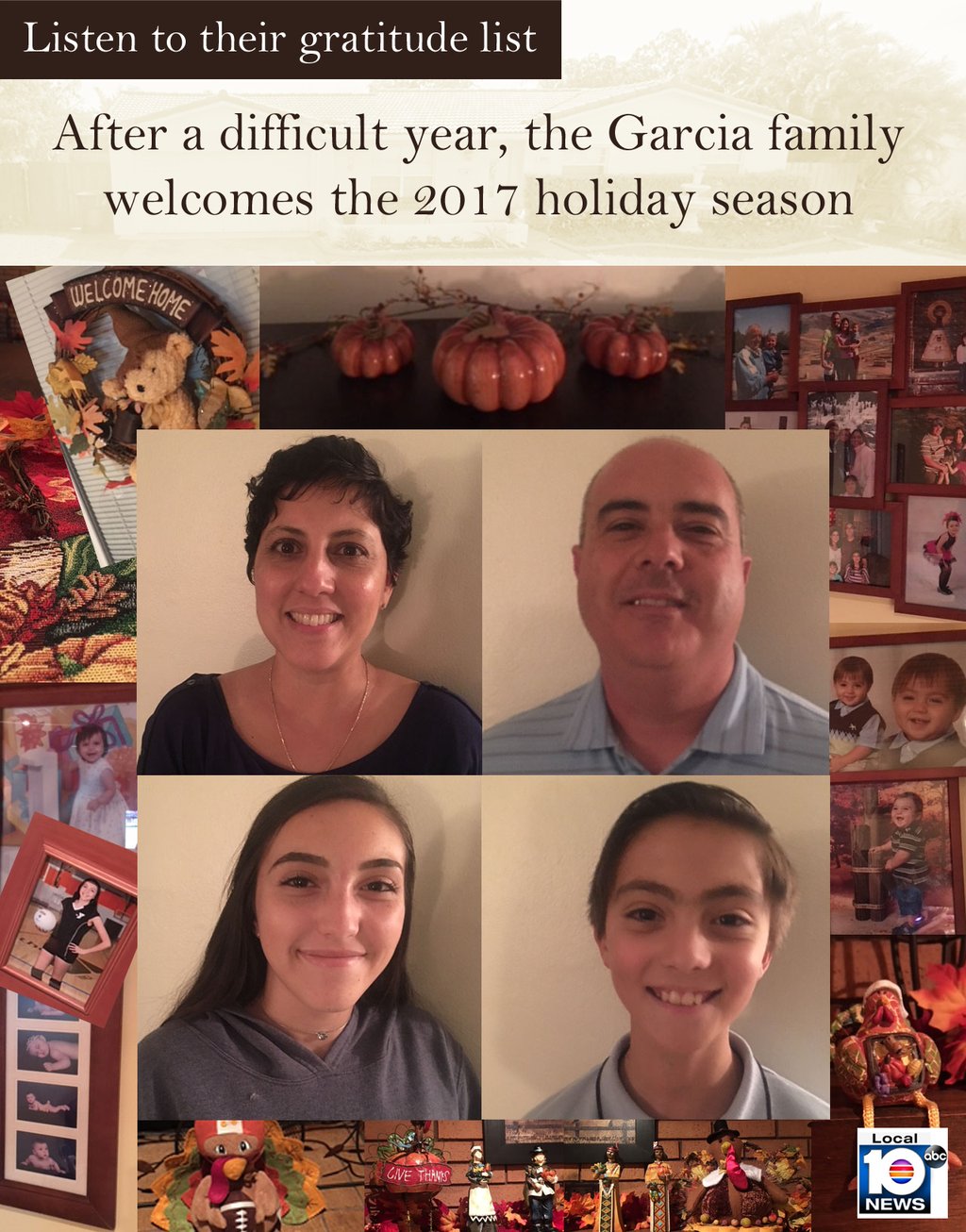