White House: Gas prices to continue to decrease in December

As setting shifts to Bahamas, so too does media frenzy surrounding court battles

The cable news channels and the public couldn't get enough of the Anna Nicole Smith soap opera. The ringmaster judge, the three contenders --Virgie Arthur, Howard K. Stern and Larry Birkhead -- and surprises around every corner.

CLICK HERE for Part 3 of "Death of a Bombshell"

There were the outbursts. Birkhead's lawyer, Debra Opri, with Stern on the stand in Judge Larry Seidlin's courtroom as she turned the body burial hearing into an opportunity to question Stern about the validity of his paternity of Smith's baby.

In another lawyer squabble, Opri stood up to announce to Siedlin that Krista Barth, Stern's lawyer, had taken a Styrofoam cup from the witness stand that was near Birkhead when he testified. She intimated that it was used to obtain DNA.

Seidlin swore in a witness via telephone. Billy Smith, the ex-husband of Smith and the father of her deceased son, Daniel, would testify. Seidlin's questioning included asking Mr. Smith, who hadn't seen his boy in 20 years, "Are you wearing boots today?"

After days of high stakes, made-for-TV courtroom drama and a full two weeks after Smith's sudden death at the Seminole Hard Rock Hotel & Casino, Seidlin tells the court he wants Smith buried in the Bahamas next to her son.

On Feb. 22, 2007, he gives his recommendation but leaves the final decision up to court-appointed Richard Milstein, the guardian ad litem who is representing Smith's next of kin, 5-month-old Dannielynn, to decide where the former Playboy Playmate will be buried.

Then he orders Milstein to work out an agreement on her final resting place among the three parties. Arthur, Stern and Birkhead walk out of the courtroom side by side. There's a collective sigh of relief.

But all is not right yet in paradise. In mere minutes, Arthur's lawyers are typing up an appeal. They want to overturn Seidlin's ruling. Arthur's appellate attorney, Roberta Mandel, says that Dannielynn is a minor, making Arthur the rightful next of kin.

It goes to the Fourth District Court of Appeal in West Palm Beach in front of three judges. Attorneys for Stern and Smith's baby daughter tell the court that Arthur is trying to "place Smith in death where she never wanted to be in life -- Texas."

On Feb. 28, 2007, six days after Seidlin rendered his decision, the judges agree with his remarks, clearing the way for Milstein, acting on behalf of Dannielynn Hope Smith Marshall Stern, to begin arrangements for Smith to be buried next to her son in Nassau, Bahamas.

Arthur announces that she will not contest the appellate court's decision.

In another courtroom in Broward County

Meanwhile, there's more discussion in another courtroom in Broward County in the complicated Smith case. Birkhead's lawyers are meeting with a family court judge to have him take charge of the case and order a DNA test of Smith's daughter. Lawyers request that Judge Lawrence Korda bring the paternity case to Florida since that's where Smith's remains are.

Birkhead filed his paternity suit in California before Smith's death. Korda, however, believes that the Bahamas has jurisdiction since the baby was born there. He sends the attorneys packing to deal with authorities elsewhere.

Now, everything shifts to the Bahamas.

While her body is still in Broward County being prepared for burial and arrangements are being made for her body to be flown to the Bahamas for her funeral, legal battles are raging 200 miles away across crystal blue waters in another country. Inside Nassau's Supreme Court, a battle over custody of Dannielynn has gawkers standing outside -- not just media, but tourists -- waiting for a glimpse of Arthur, who is fighting Stern for custody of Dannielynn, and Birkhead, who is seeking a DNA test of the baby.

In yet another legal battle, a South Carolina developer says he still owns the home where Stern and Dannielynn are living. A separate court hearing involves an attempt to have Stern evicted, since the owner of the home, G. Ben Thompson, says Smith never repaid him the $900,000 his attorney says he's owed. The lawyer told a swarm of press outside Nassau's Supreme Court that he "wouldn't put the child on the street. We don't want to be harmful to the child," referring to Dannielynn.

All this is going on amid questions of how Smith was able to fast-track her residency in the Bahamas.

"Hurricane Anna Nicole," as a confidential cable by the deputy chief at the U.S. embassy had dubbed her, had wreaked havoc in the Bahamas much before her death would bring her back there.

So much so that she was the topic of a classified cable written Nov. 15, 2006, obtained by WikiLeaks. London's The Guardian newspaper got a hold of it in 2010 and published it.

Written by then-Deputy Chief Brent Hardt, his prose read like a novel and a news story all rolled into one: "Not since Category 4 Hurricane Betsy made landfall in 1965 has one woman done as much damage in Nassau. Lying in disarray in her wake are Doctor's Hospital, the coroner's court, the Department of Immigration, local mega lawyers Callendar and Co., formerly popular Minister of Immigration Shane Gibson and possibly Prime Minister Christie's government."

Smith filed for legal residency in the Bahamas on Aug. 11, 2006, using the Horizons house, the mansion in which she, Stern and Dannielynn were living, and was granted residency about a month later. Many skeptics criticized the granting, saying the process generally takes a year.

The WikiLeaks memo notes that Gibson, who approved the application, was provided a $10,000 check made directly to him. He claimed that she wasn't given special favors, but cheeky photos were splashed across the Tribune of Nassau after her death showed the two, fully clothed but embracing on a bed decorated with pink flowers. 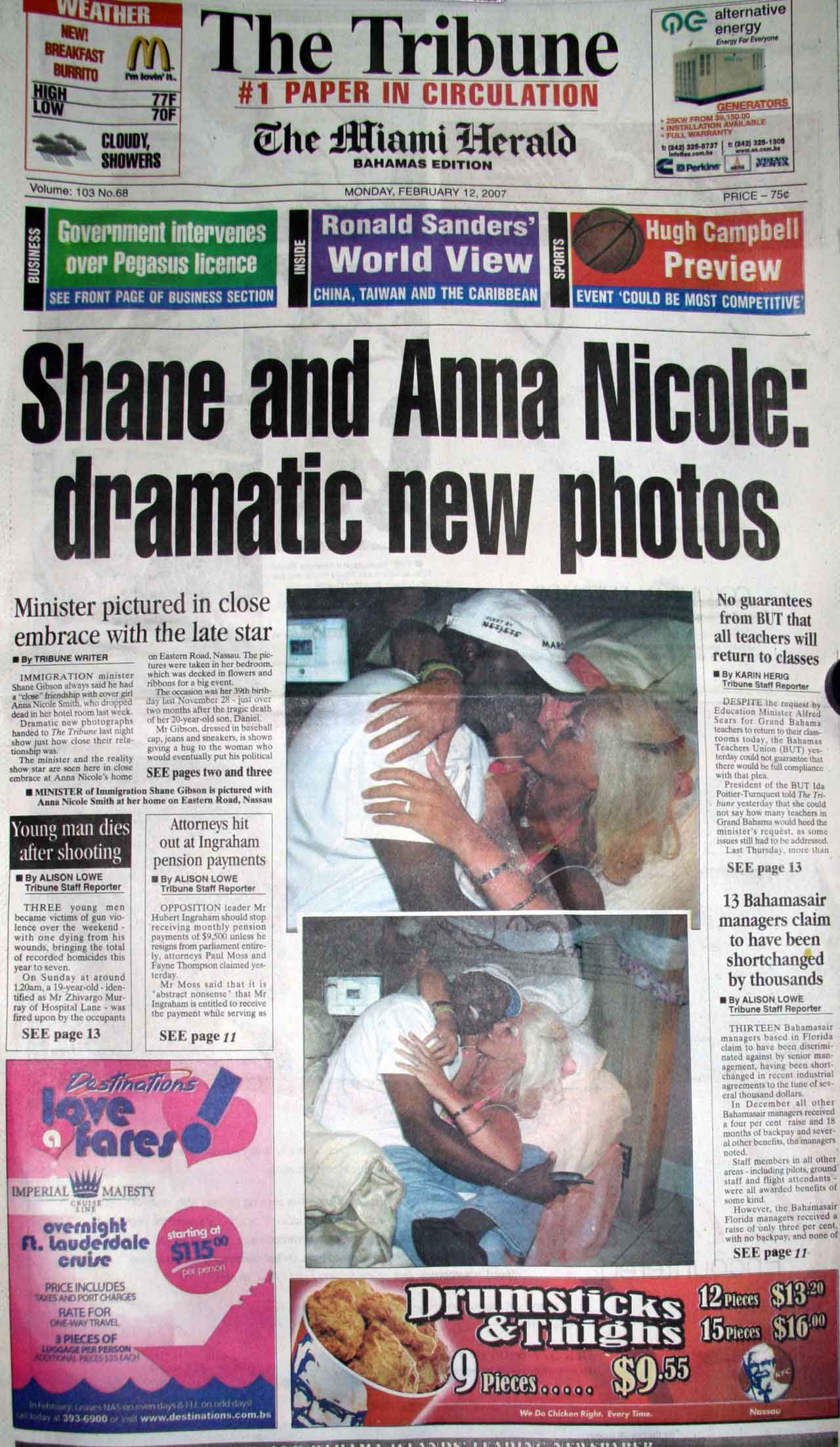 Gibson's father was King Eric Gibson, who was captaining the boat that Smith was buying in Broward County. King Eric's common-law wife, Brigitte, was accompanying Smith when she passed away at the Seminole Hard Rock.

Shane Gibson ended up stepping down but denied any wrongdoing or impropriety with Smith.

Ten years later, Gibson would be caught up in a different hurricane scandal. He was linked to allegations of a corrupt contract on hurricane relief spending in the cleanup phase of 2016's Hurricane Matthew. The investigation into those charges continues in Bahamas and a trial was set for Sept. 23, 2019.

Dannielynn gets a visitor

Back to the Bahamas of 12 years ago, where the island awaits the onslaught as Smith's funeral plans are underway and the paternity suit plays out. It's Tuesday, Feb. 27, 2007, and Arthur has arrived. She gets a visit with little Dannielynn.

She emerges from the Horizons home, tearful, after 15 minutes and climbs into an SUV. TV cameras capture her crying and being consoled by passengers in the car. Arthur had been given permission to visit the baby under Stern's supervision, but it wasn't revealed who gave that permission.

Roger Lohse, then reporting for Local 10 News, is in the middle of the whirlwind in the Bahamas.

"We were only supposed to go there for a day or two and we ended up being there for a week," Lohse tells the Florida Files. "Every day, there was a new development. There was another hearing or another person arriving. It morphed into an international drama."

One of the biggest scoops Lohse said he received from sources at the Bahamian police was that Seminole Police Chief Charlie Tiger was going to be arriving in a surprise visit to the Bahamas.

Lohse caught up with him on Feb. 27, 2007, as he left a restaurant in Nassau, but Tiger, who was investigating Smith's death on Seminole property in Hollywood, Florida, wouldn't tell the reporter why he was in town. He was accompanied by a team from the Broward County medical examiner's office, and they were all driven away by a Bahamian police detective.

A spokesman for the Seminole Police Department told Lohse that Tiger was in Nassau as part of a non-criminal investigation into Smith's death.

It's Thursday, March 1, 2007, and back in Broward County, Milstein is getting everything in order for Smith's body to be flown by private plane to the Bahamas early the next day, when her funeral will take place at Mount Horeb Baptist Church and her body will be buried next to her son at Lakeview Memorial Gardens & Mausoleum.

"I had to pick up the burial dress that was made for her," Milstein says. "There were a number of things that happened that one wouldn't usually have to deal with in a probate or a courtroom setting. We worked with a special funeral service, I'll call it, meaning people that do high-profile funerals. We located one and we started that process. I left a lot of organization to Howard Stern because he was in the Bahamas. I hired the people and had him make the arrangements. I put detail out as to what I was going to do and not going to do. I had to make arrangements to bring the body into the Bahamas, get a private plane, get the ashes from her late husband (Texas oil tycoon J. Howard Marshall II) that she wanted buried with her. I was the last person to see her body before it was put into the ground, and I would not leave the medical examiner's office until I knew I had the right person going into the plane."