For boy's family, Thanksgiving is opportunity to thank UM audiologist

MIAMI – The music was loud. The voice of an announcer echoed during a Pee Wee football game at the Milander Park football field in Hialeah. A coach was shouting. Justin was wearing his aqua blue and orange hearing aids.

The 6-year-old boy stood up. He quickly turned to look at his older brother, Jorge, who was sitting behind him, and he smiled. His 10-year-old brother had just said Justin was his hero.

The fifth-grade student said he has been watching his little brother closely. The two attend Dr. Manuel C. Barreiro Elementary School in Miami-Dade County. Justin is in first grade and next year Jorge will be in middle school.

"I do worry about bullies. I thought they [hearing aids] should have been skin color, so he could hide them, but he wanted the Dolphins' colors. They look like headphones," Jorge said. The University of Miami "and the Dolphins really made a difference. They helped us and helped Justin be secure and proud, so no one is messing with him."

They were all part of Justin's support system after a third test confirmed his hearing loss.

Justin's mother, Stephanie Matias, said she is overwhelmed with gratitude. She said she never imagined the love that would follow, after Justin was diagnosed with a genetic disorder that caused him to lose hearing. She was in tears at the Children’s Hearing Program at the University of Miami Health System.

"We were concerned and we were afraid, but that all melted away with all of the support," Matias, 29, said. "Everyone has really helped him with his confidence. He is so much more sure of himself."

Pediatric audiologist Chrisanda Sanchez set a plan in motion to help Justin to not be ashamed of the hearing aids. She said she saw fear in Justin's eyes when he asked if he could still play football.

"I told him he is not limited. He can do anything he wants to do," Sanchez said. "His hearing aids are like glasses.

At the UM clinic, the children are referred to as "the superheroes," and Sanchez said they are constantly reminded that they "are special in their own way. They need to wear hearing aids, but it makes them no different than any other child."

Justin is going through the adaptation process. Sanchez said he has been wearing "sturdy" devices that act like "little computers in his ears." They are far from the old basic amplifiers that required turning up all of the volume. In the last decade, the technology has been updated every three to five years.

"Now they are so sophisticated. If there is noise, they can reduce what is considered background noise and improve the main speech sound," Sanchez said. "They are constantly analyzing the noise environment to adjust, so that not all noise is very loud. It's making the sounds where he needs that boost a little louder."

Sanchez said she rarely gets patients who are able to vocalize their passions in the way Justin did, so she asked the UM Health's marketing team for help. And on the day Justin went to get fitted for his hearing aids, Sanchez had a surprise for him.

"It was clear that everyone in the family was a die-hard football fan," Sanchez said. "This whole process is about giving children the encouragement and the empowerment to know that they shouldn't be ashamed."

After Justin put on his first pair of hearing aids with the logo of his favorite team, he said, "This is awesome! I can hear better!"

Sanchez said children are not always as excited as he was. Once he had them on, she took him to a room, where the surprise was waiting.

Matias said Justin was in shock when two Miami Dolphins cheerleaders greeted him. Dolphins wide receiver Kenny Stills knelt to the floor to shake his hand and give him gifts -- including his first official personalized Dolphins jersey. Doctors and other former NFL players clapped.

"It was like a dream for him," Justin's mom said.

The Dolphins also gave Justin a trophy with a picture taken on the day he got fitted for the hearing aids.

"The trophies are both so cool," Justin said. "It was a fun day."

Justin's father, Jorge Matias, is a Pee Wee football coach. He said the only problem now is Justin wants to wear the hearing aids all the time.

Justin doesn't wear them while he is playing football, because if he falls on one of them, the pressure from the helmet can crush it on his ear and hurt him, Matias said.

"Thanks to the hearing aid, he picks up on things much faster. Everybody has been so good to him and it has made everything much easier," Justin's dad said. "If it was something weird to him, he would be shy. He actually complains when he doesn't have them on, because he wants to wear them." 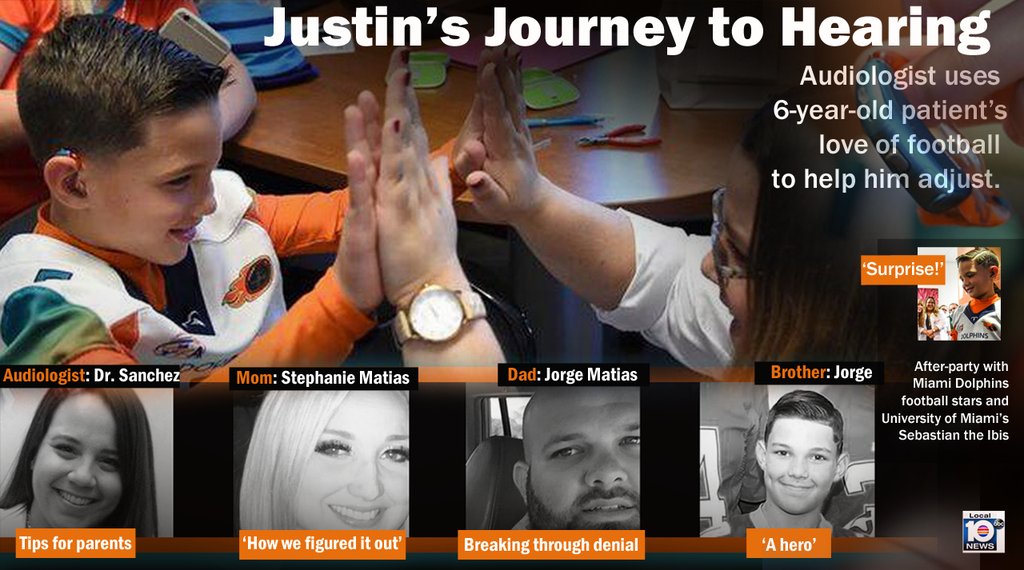