Mother of 4 one of victims of horrific Miami Gardens crash, aunt says

MIAMI BEACH, Fla. – With no end in sight to the global war on terrorism, U.S. combat veterans continue to return to South Florida with traumatic brain injuries, post-traumatic stress disorder and other disabilities.

The veterans have been coming home to an opioid crisis and a U.S. Department of Veterans Affairs with scandal-plagued facilities and sweeping mismanagement.

Dr. David Shulkin said he is most haunted by the estimated 20 veterans nationwide who are committing suicide every day. His father served as a U.S. Army psychiatrist.

"These issues around mental health, I know how much they can impact not only the life of the patient, but of the whole family," Shulkin said. "The toughest times with him were when he lost a patient to suicide. It would just dramatically eat at him, you know, what could he have done better, so that's how I feel."

Former President Barack Obama and President Donald Trump put their trust in him to fix the VA and save lives. Shulkin, who was born at the Fort Sheridan U.S. Army base in Illinois, was under secretary of health and in February became the first secretary of veterans affairs to not have served in the military.

For the first time in the VA's history, Shulkin will allow veterans with a less than honorable military discharge to be able to access free mental health care services. He said he has also made improvements to the VA hotline.

Shulkin isn't looking for incremental change. He wants to build an integrated network between the "best of the private sector" and the VA. Trump is requesting $186.5 billion with an increase of $4.3 billion over 2017 to make his plans happen.

The president also recently signed the accountability legislation to give Shulkin the ability to say "You are fired!" more often. The stripping of employee protections will allow the VA chief to replace poor-performing employees, recoup improper bonuses and recover pensions from executives who are convicted felons.

At least 500 VA employees have been fired since Jan. 20, according to VA records released on Friday. The agency also demoted about 27 employees and suspended an additional 194 employees.

Shulkin is also tackling the gargantuan task of replacing the government's record system. He cited a public interest exception to federal contracting rules to give Cerner Corp. the job without competitive bidding. Cerner won the $4.3 billion Department of Defense contract in 2015.

Shulkin said he is also working with the DOD to get rid of the "transitional gap." He said the DOD puts servicemen and women through intense training when they enter the military. He believes veterans should get just as much training when they transition from a military life and into a civilian life.

"We know that can be extremely stressful on veterans who are returning from areas of conflict," Shulkin said.

Shulkin said he is ready to work with local authorities and groups who support veterans to make improvements and expand partnerships. This week he was working on  a deal with Miami Mayor Tomas Regalado to add more parking on an adjacent property that belongs to the city.

"As much as the VA is doing, it needs help from the local communities and from organizations in the community," Shulkin said. "These are community wide problems and as citizens we all share the responsibility of making sure that we stand up for our veterans when they need help." 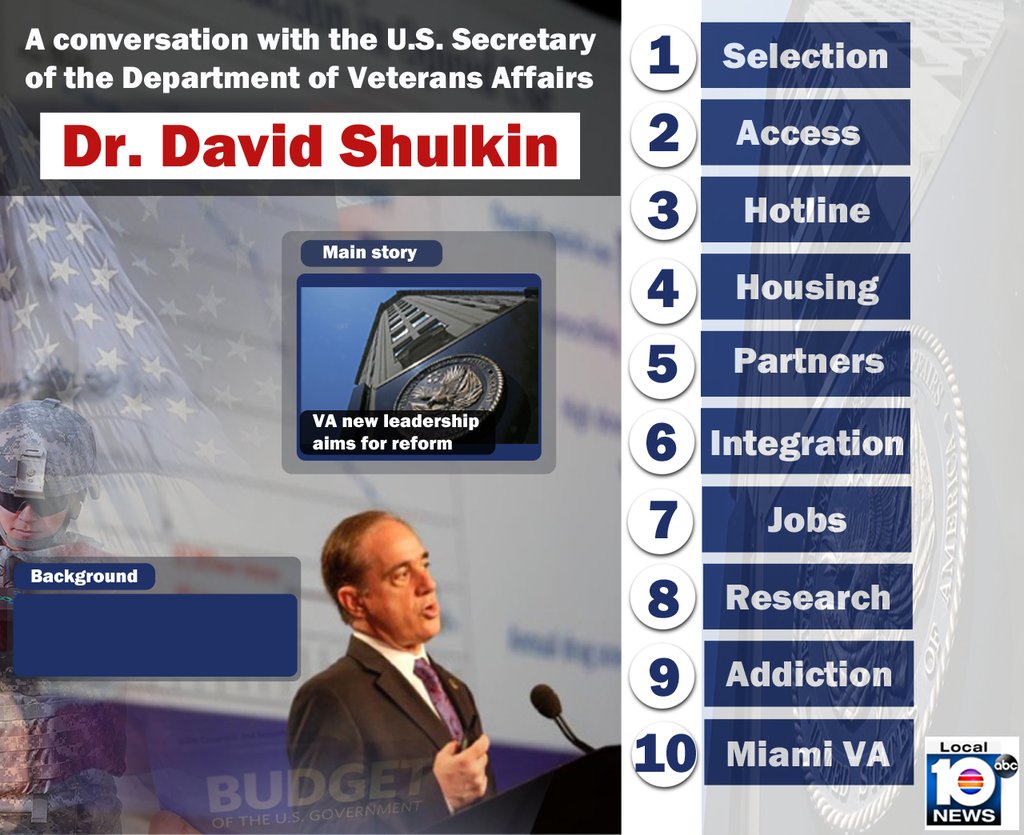