Coronavirus in Florida: 70 deaths reported over past 24 hours, with 20 in Miami-Dade

For Brigade 2506 veterans, fight against socialist regime is not over

MATANZAS, Cuba – It was about 3 a.m. Humberto Diaz-Arguelles and another 182 members of the second battalion of the Brigada Asalto 2506 landed at Playa Larga, in the southern province of Matanzas. They were wearing camouflage fatigues.

Diaz-Arguelles had a rifle, ammunition for 81 mm mortars and a Roman Catholic rosary in his left pocket. He was a teen when Fidel Castro overthrew Gen. Fulgencio Batista Jan. 1, 1959, and he had just turned 18 when he flew from South Florida to Guatemala. He was fighting for a democracy.

What followed that day for the soldier and the other members of brigade 2506 were crushed dreams, betrayal, heartbreak and time in a Cuban prison.

President Dwight D. Eisenhower authorized the CIA to start recruiting for a potential operation in Cuba. When President John F. Kennedy took office, he allowed the CIA to go forward with a mission to destroy Castro's air force. Before his assassination in Texas, Kennedy took full responsibility for its failure.

The existence of the U.S.-trained Cuban exiles was not a secret to Fidel Castro. The CIA kept records of its involvement, which were classified until 1997. Castro didn't know where the fighters were going to land, so he had the Cuban Revolutionary Armed Forces on alert, waiting for an invasion.

"We knew Castro had infiltrated the camp," he said about a CIA recruit military training camp at La Helvetia, a coffee plantation in the mountains of Guatemala.

The CIA referred to the camp, nested between Quetzaltenango and Retalhuleu, as JMTrax. The name of the brigade was born in honor of Carlos Rodriguez Santana, a CIA recruit identified as 2506, who died during training in Guatemala. 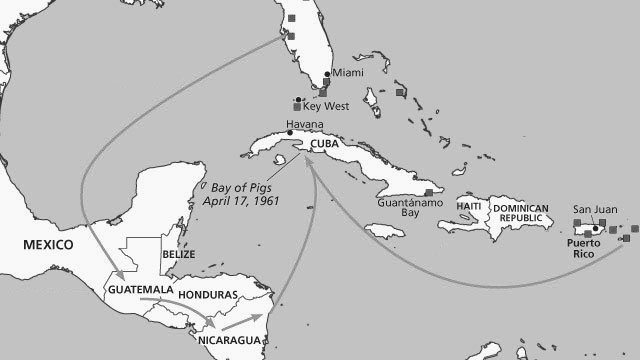 The infiltration battalion had some of its members inside Cuba preparing for the logistics of the invasion. A brigade squadron of World War II B-26 bombers -- disguised as Cuban Air force -- took off from Nicaragua April 15, 1961. Their mission was to strike the principal Cuban Air Force bases: Havana, San Antonio de los Banos and Santiago de Cuba. But Kennedy canceled a second air strike.

"That decision started the beginning of the end of the invasion even before we landed by alerting Castro," Diaz-Arguelles said.

Most of the battalions left Guatemala for Nicaragua. They then traveled to Cuba in cargo ships that were not prepared for war or landing. Frogmen spotted the specific landing sites. Men of the first battalion trained as paratroopers and landed after the infantry got to Playa Larga and Playa Giron.

During the Bay of Pigs invasion, Castro set up a command center in the village of Australia. He attacked the brigade with everything from Russian T-34 tanks, Czech anti-aircraft guns, 122 mm artillery, B-26 planes, British Hawker Sea Fury fighters and a T-33 jet.

Brigade 2506 fighters' supplies were exhausted. Amid Cold War-era anxieties, Kennedy abandoned them. While communicating with a U.S. Navy destroyer, brigade commander Jose Perez San Roman shouted,  "How do these people expect me to defend the beach with no air force, no artillery and no antiaircraft guns? I'm a military man, not a magician."

Meanwhile, Diaz-Arguelles was one of the hungry soldiers walking on the beach. He was carrying an M1 Garand rifle without ammunition. The Houston, a brigade supply ship, was up in smoke. Without the U.S. Navy support promised, he and hundreds of others had no choice but to surrender.

Perez San Roman sent one last message to CIA's Grayston Lynch: "We have nothing left to fight with. How can you people do this to us, our people, our country? Over and out."

Lynch said, "I am sorry and good luck."

In 1962, the Cuban Families Committee asked attorney James B. Donovan to represent them in their efforts to secure the release of the Bay of Pigs prisoners. Donovan met with Castro Aug. 31, 1962.

Dec. 29, 1962, surviving brigade members gathered for a ceremony in Miami's Orange Bowl, where the brigade's flag was handed over to President Kennedy. "I can assure you," the president promised, "that this flag will be returned to this brigade in a free Havana." 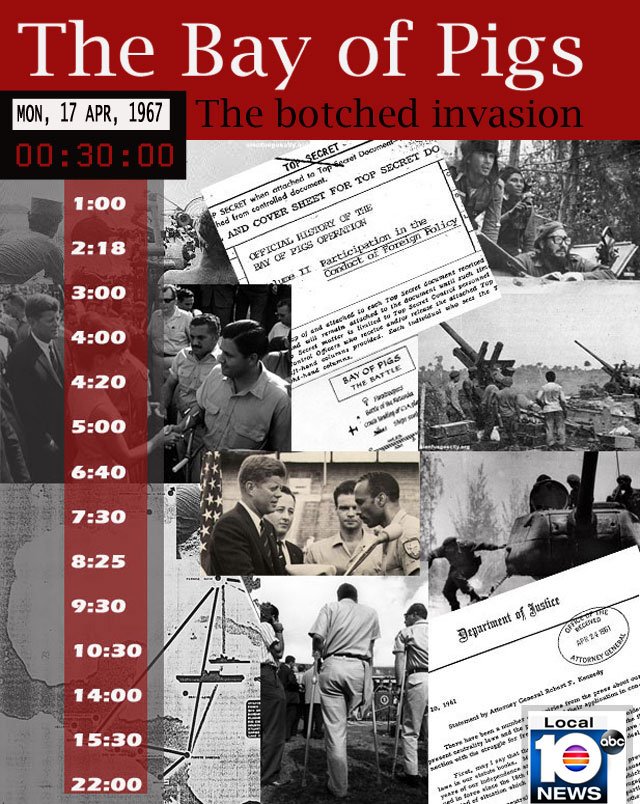