SAGUA LA GRANDE, Cuba – In the aftermath of the attacks in Paris and with the U.S. and Russia potentially joining a coalition against the Islamic State, it is difficult to recall the frightening looming armageddon of 1962.

The Soviet flag was flying over Kremlin, when the U.S. had missiles in Turkey. The Soviets had missiles in Cuba. And the world was at the brink of nuclear war for about two weeks. Had the conflict exploded, the lives of about 200 million people would have been lost.

About a three hour drive east of Havana in the province of Villa Clara, there are remnants of The Cuban Missile Crisis. A historic site hides at the outskirts of the city of Sagua La Grande, where former Republican U.S. Senator Mel Martinez was born.

"Every now and then people come here," a farmer who did not want to be named said in Spanish.

Getting to the once-secret nuclear warhead bunker, required a drive near the tiny town of Mariana Grajales, a Cuban icon of the women's struggle for independence. And a two-mile hike through a rocky road.

After crossing an abandoned field of wilderness, invasive species covered the ruins of a warehouse formerly part of a medium range ballistic missile site. A local commander could have launched the tactical nuclear weapon that could have started World War III from Sagua de la Grande.

"Everyone calls it the Russian spaceship," the man said about the perception that locals have of the alien looking structure. 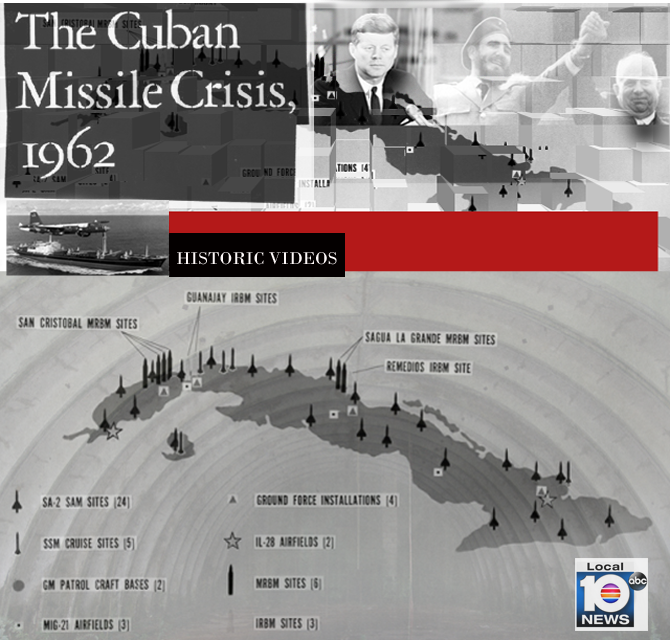 The existence of secret bases like the one Local 10 News visited came to light, after a U.S. spy plane witnessed the Soviets sneaking in missiles.

"It would have taken only the time to fuel them, about six hours, to have them ready to fire," according to Dino A. Brugioni, a top CIA photo analyst who worked during the crisis.

The crisis reached a head on Oct. 27, 1962 -- known by Kennedy's aids as "Black Saturday" -- when a Soviet SA-2 surface-to-air missile shot down an American U-2 conducting a reconnaissance flight over Cuba.

The pilot U.S. Air Force Maj. Rudolf Anderson, Jr., was killed and on the brink of war, the Soviet and American governments made a then-secret deal to end the near flash point.

Kennedy's aides misled the public into believing that no deal had been made to take the U.S. missiles out of Turkey, a falsehood that was promoted for many years, Pincus reported. Over the years, records and secrets revealed have uncovered that there were many close calls.

Earlier this year,  The Bulletin of the Atomic Scientists, a journal for leaders and policy makers, published a story with the account of the then-Air Force airman John Borde. He served during the Cuban Missile Crisis on the Japanese island of Okinawa, which could reach Soviet military facilities at Vladivostok.

Borde told The Bulletin that he and others were ordered to launch 32 missiles, each carrying a large nuclear warhead. But he said personnel prevented the launches. The National Security Archives was working on getting the records to verify the incident.

At the former missile-ready warehouse in Sagua de La Grande, the only dangers now were the bats and the bees. Some Cubans believe there are many Soviet secret bunkers and underground tunnels on the island that were built during the Cold War, but have yet to be discovered.