Shooting victim gets dropped off at fire station in West Park

Julie Durda cheers on the Niners then and now

KENDALE LAKES, Fla. – In the spiritual sense, "the land" doesn't belong to the Miccosukee Tribe of Indians of Florida, the members of the tribe are just there to take care of it, and not to buy it or own it, tribe member Houston Cypress said.

But tribe members have to make decisions to buy and own land all the time now, even though it goes against their spiritual values, Cypress said. His grandfather and great-grandfather were able to live off of the land, but today's members can't do that anymore, he said.

"It gives us more authority," said Cypress, who was not involved in the business or legal decisions. "We have adapted, because that is what we have had to do to survive."

By changing the jurisdiction of the golf course they own in Miami-Dade, the 229 acres would no longer be subjected to property taxes, fees or zoning restrictions. The legal process to get jurisdiction over their property, 6401 Kendale Lakes Dr., began in 2003. If approved, the 27-hole golf course would be under the same laws that apply to the tribe's 80,857 acres of reservation land.

The process required the tribe to file a petition to a federal agency within the U.S. Department of the Interior, which will then decide if the land can be transferred into trust for the tribe.

Amid fervent opposition in Miami-Dade, there has been a back and forth with the federal agency during the last decade. Kendale Lakes property owners, Miami-Dade County authorities and the State Attorney's Office have been opposed to the jurisdictional change.

The exchanges have been hostile. When local authorities said that the tribe already had enough land, there was outrage.

The statement was "appalling," said a representative of the U.S. Department of the Interior's Bureau of Indian Affairs, the agency that manages millions of acres of land that the U.S. held into trust for Native American tribes.

The BIA representative also said that "the atrocious history of taking land from Native Americans" was a factor to be considered in their decision. The disagreement over whether the tribe already had enough reservation land happened after the BIA approved the tribe's petition July 27, 2012.

Miami-Dade County appealed and the BIA's decision was vacated July 10, 2013. This is why Miami-Dade County residents were surprised to learn this year that the tribe was trying to get jurisdiction of the golf course again. And legal experts who have been following the case say the tribe may just get their way.

They included the 1997 drownings of two toddlers, after Kirk Billie, a tribe member, stole his ex-girlfriends truck and drove it into a canal in Miami-Dade County with their two sons inside.

There was also the arrest for trespassing of a Miami-Dade police officer who was serving a subpoena in 2002, and a drunken crash with injuries involving a tribe member in 2008.

After the 2009 crash that involved the former chairman's grandson in the death of Tatiana Fury. According to Florida Highway Patrol, the Miccossukee refused to give them access to evidence.

This is why FHP is the responding agency for all "serious traffic crashes" on Tamiami Trail.

Records show the Miccosukees re-filed their petition with the BIA March 12, 2014, but Miami-Dade County Mayor Carlos Gimenez wasn't notified until January. The State Attorney's Office and the neighboring residents were not notified at all, but objected as soon as Miami-Dade County informed them.

State Attorney Katherine Fernandez Rundle sent an April 21, 2015 letter to the BIA saying that she has been concerned about the safety of the residents who live in the surroundings of the Miccosukee's U-shaped golf course since the tribe filed the petition  in 2003.

"We remain unable to rely upon the cooperation of the tribe when tribe members are involved in criminal activities and when the Miccosukee Police Department is the investigating agency," Fernandez Rundle said in the letter this week.

She warned in 2003 that if there was a jurisdictional change, there is a danger "that some crimes may not be effectively prosecuted and the rights of some victims may not be completely protected."

A Miccosukee police officer said that the tribe's legal department did not authorize the tribe's police department to answer any questions related to the accusations that the State Attorney's Office was making. The tribe's attorney Bernardo "Bernie" Roman did not respond to emails or messages left at his office in Miami.

"We are not authorized to comment," a police officer said Thursday, after Local 10 News made several attempts to give the Miccosukee Police Department an opportunity to respond to the accusations.

ABOUT THE INDIAN RESERVATION

Most of the mid-southeast region of the U.S. was Miccosukee territory, before they were forced to find refuge in South Florida.

The tribe has 80,587 acres of trust lands in four counties -- Broward, Hendry, Highlands and Miami-Dade.

There are 859 acres of tribal land in Miami-Dade. The tribal community is on 667 acres on the northern boundary of the Everglades National Park.

Assistant County Attorney Ileana Cruz has warned that if the property's jurisdiction changes, "the cost and burdens for the current services, as well as future services, will unjustly fall on other property owners within the County, despite the tribe's clear ability to pay."

During the 2013 appeal, Cruz said the tribe didn't have an imminent need to have jurisdiction over the golf course.

"Tribal members are not engaged in subsistence living -- the truth is quite the opposite -- they are a wealthy tribe that distributes hundreds of thousands of dollars to their members each year," Cruz said. "Each tribal member receives at least $120,000 annually from the tribe. The tribe can easily afford the taxes on the property."

Miccosukee Tribe Chairman Colley Billie and the other four members of the tribe's general council did not confirm if the sum Cruz presented was current.

Billie said last year during an interview with the National Museum of the American Indian that the tribe had 594 members. And aside from the casino operation and the golf course, he said their enterprises also included bingo, a tobacco shop, service plazas and tourism at the Miccosukee Indian Village & Airboat Rides business.

Billie was re-elected in 2013 and follows in the footsteps of his dad, Sonny Billie, who was chairman and a leading medicine man passionate about protecting the Everglades.

"We’ve always believed that the current government known as the United States of America is built on Indian lands," Billie said during the 2014 interview. "Essentially, this is a country built on top of another country."

During Miami-Dade County's appeal of the BIA's 2012 decision, there was a legal dilemma about whether the 1934 legislation that allows the federal government to take land into trust for Native American reservations applied to the Miccosukee.

The tribe, formerly part of the Seminole Tribe, wasn't recognized until 1962.

Miles Moss, who lives and works in the Kendale Lakes neighborhood, said he doesn't like the idea of having a country inside the county. He is the former director of the Kendall Federation of Homeowner Associations.

He has been in opposition of the change in jurisdiction since 2003, because he  was worried that the 99-year zoning restriction that requires the land to remain a golf course until 2071 could be nullified.

A rumor that the tribe wanted to replace the golf course for a casino prompted the "Stop Kendale Lakes Casino" campaign, which gathered hundreds of petitions asking that the golf course remain under Miami-Dade County jurisdiction.

Under Miami-Dade, "changes to the land use would require 75 percent of the neighbors approval and support from the majority of the commissioners, but that could change" if the property is under the jurisdiction of the Miccosukee tribe, Moss said.

During the petition process, tribe attorneys said May 8, 2013, that concern over gaming was "without foundation." They claimed they invested $4 million in upgrades to meet Professional Golfers Association of America standards and that building a casino wouldn't be easy, because they are required to follow the National Indian Gaming Commission  regulations.

"I have gotten calls from people in other cities who are following this case, because it could set a dangerous precedent," Moss said. "They are afraid this could happen to them. What's going on here deserves more attention than it's getting."

The residents' group "Save Kendale Lakes" recently complained that the federal agency hasn't made an effort to host a public hearing. Moss said he believes that if the federal government transfers the land, the tribe will continue to show "complete disregard" for their neighbors and a "jurisdictional nightmare" would ensue. 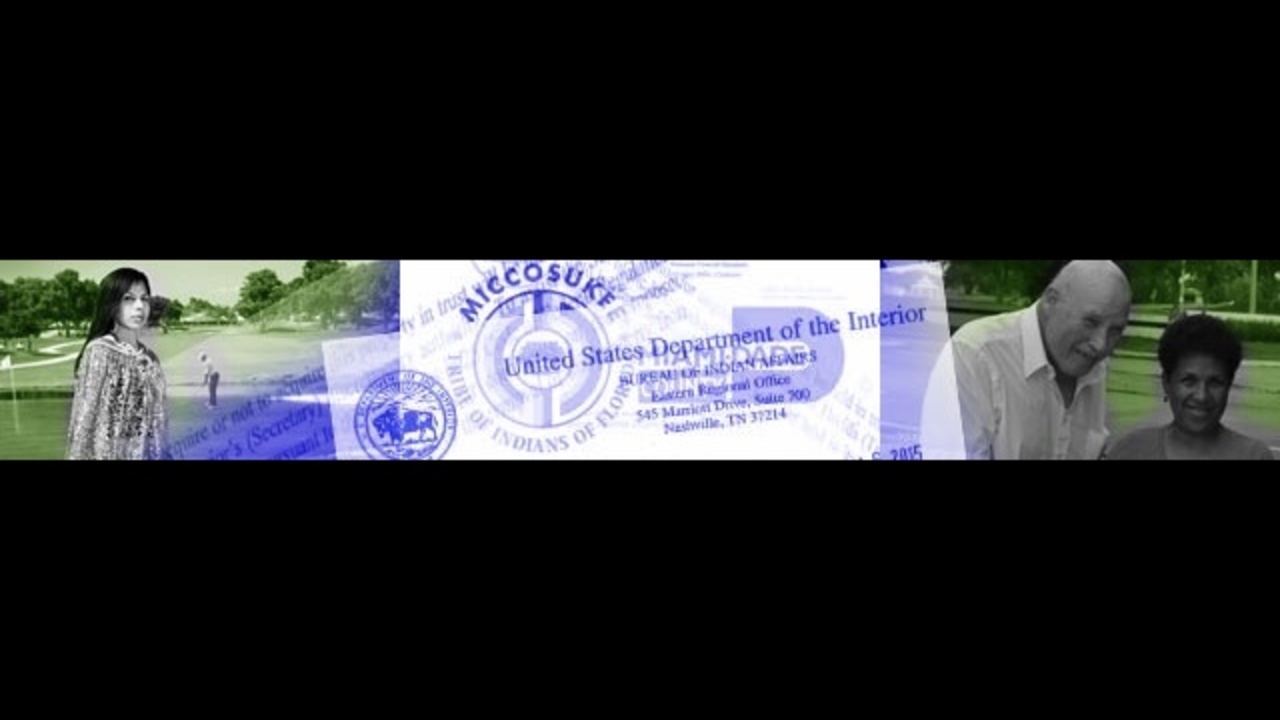