MIAMI BEACH, Fla. – South Beach was filthy early Saturday morning. There were glass bottles of vodka, wine, whiskey and beer. There were piles of plastic bottles and plastic bags. There were straws and Styrofoam cups in the sand. There were soda cans and beer cans.

A wave of Spring Break tourists took over the beach at Lummus Park, Ocean Drive and Washington Avenue. And so did their garbage.

Michael DeFilippi, a Miami Beach activist, said he was heartbroken and disgusted. He said he saw the tide was coming in and all of the trash was going out into the ocean on Friday afternoon. Sanitation employees couldn't clean the beach until the tourists were gone.

"I'm disgusted at the nasty people who treat our beach like a dumpster," DeFilippi said.

"Lummus park has some gates closed, but yet the crowd managed to bring in a surreal amount of alcohol," Miami Beach resident Marcella Paz Cohen said.

The mess comes, after the city launched the "Keep Miami Beach Clean, #KeepMBClean" campaign in February, which Miami Beach Commissioner Michael Grieco said was supposed to reinforce the importance of keeping the city beautiful. The fines for litter violations range from $1,500 to $3,500.

The very fit Miami Beach Police Department spokesman Ernesto Rodriguez appears shirtless in campaign posters at bus stops and public buses. In a video in Spanglish he says, "Mi abuela no está aquí para limpiar." That is Spanish for "My grandmother isn't here to clean." And in a poster, he says in Spanish, "Pick up after yourself! You mom doesn't live on the beach. Keep the beach in shape."

Commissioner Micky Steinberg, who is the chairperson for the city's sustainability and resiliency committee, said in a statement after the campaign launched that he was proud of the effort.

"I am excited we are being so proactive," Steinberg said.

Grieco proposed an ordinance that would make littering a second-degree misdemeanor. The ordinance will come back to the commission in October, The Miami Herald's Joe Flechas reported. Grieco also organized a March 19 clean up. The investment, which seemed to target locals, didn't show any results Friday and Saturday.

"The message was going in one ear and out the other," Miami Beach resident Natalia Carvajal said.

DeFilippi, who works in real estate and is politically active, said the city needed more. He also organized a group of volunteers for a clean up effort Saturday afternoon.

"It's going to be horrible all weekend and we need people out all day," DeFilippi said. 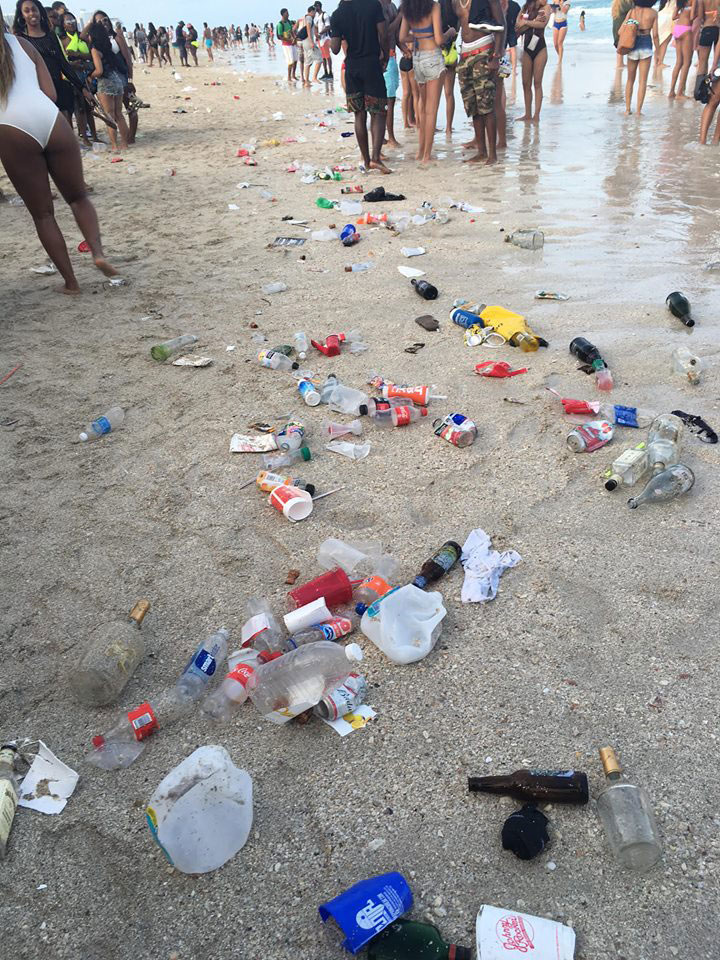