MIAMI – Óscar Romero was at the chapel of a hospital when a sniper shot him through the heart 36 years ago.

The Archbishop of San Salvador was holding up the chalice when he fell to the ground. The United Nations dedicated the day, as a time to honor those who have died, while fighting for human rights. And Pope Francis recognized his sacrifice last year.

While some Roman Catholics in South Florida were remembering Monseñor Romero's anniversary of martyrdom, they were also marking a day of prayer for missionary martyrs and Holy Week's Maundy Thursday -- Jesus Christ's Last Supper before his crucifixion.

"Our commemorations defy the attempt by his murderers to silence his cries for justice and reinforce the importance of standing firm for fundamental freedoms," UN Secretary General Ban Ki-moon said in 2014. On Thursday, Ban Ki-moon said he urged leaders to "adopt measures to promote truth, justice and reparations for victims."

The truth about those guilty of Romero's murder remains murky. Sgt. Marino Samayoa was the suspected gunman. A UN commission reported the mastermind was Roberto "Chele" d'Aubuisson, a Salvadoran army major who lived in Miami and was the commander of the death squads. He maintained his innocence until cancer killed him in 1992. The owner of the rifle used in the murder was killed in 1994, according to TeleSur.

Mario Molina, former President Colonel Arturo Molina's son, was accused of financing the death squads. He had the support of wealthy coffee tycoons and elite landowners, who perceived Romero's weekly homilies as a threat to their business.

"Romero is not a Saint. That is an absurdity. Just as it is an absurdity that we should all be equal. The poor and the wealthy exist, because it is God's nature," a former member of the Salvadoran military living in Miami, who said he was not involved in the murder, told Local 10 News on condition of anonymity, because of fear of reprisal. "The Archbishop's Marxism-Leninism was dangerous and needed to stop for the good of society. We were there to protect society. That is what the military duty calls for."

The Miami resident said his former superior Gen. José Guillermo García, Salvador's former minister of defense, shouldn't have been deported from the U.S. earlier this year, after a court upheld a federal judge's 2014 decision in Miami. Judge Michael C. Horn found "clear and convincing evidence" that the General who lived in Broward County "assisted or otherwise participated" in the murder of Romero, records show.

Julian Filochowsky, a gay activist who has a civil partnership with a former priest, worked with Romero in El Salvador. The former director of a Catholic aids agency is the director of the Romero Trust, a nonprofit based in London. He talked to the Vatican Radio Thursday.

"Romero was truly a Eucharistic martyr," Filochowsky said during the interview. Through his activism against the economic repression of the U.S. backed military regime in El Salvador, Romero "gave his life freely."

Romero was ordained in 1942. Following the directives of Pope John XXIII's Vatican II of the 60's, he told peasants that God was not to blame for their poverty. According to liberation theology, which Pope Francis embraces, evil was to blame for social and economic repression and it was a duty to fight it.

After his friend Jesuit priest Rutilio Grande was killed in 1977, Romero's demands for justice in his death and the brutal killings of other priests, went unheard. When he blamed the country's junta government for Grande's death, the Salvadoran Episcopal Conference, including the military chaplain, accused him of treason. Death threats followed.

"There is an institutionalized violence expressed in a political and economic system that believes progress is only possible through the use of the majority as a productive force conducted by a privileged minority," Romero said in a pastoral letter.

"No soldier has to obey an order to kill. It is time to regain your conscience," Romero said. "In the name of God and in the name of the suffering people, I implore you, I beg you, I order you, stop the repression."

Moments before he was shot, the 62-year-old said, "Those who surrender to the service of the poor through the love of Christ, will live like the grain of wheat that dies. It only apparently dies. If it were not to die, it would remain a solitary grain. The harvest comes because of the grain that dies."

His death would mark the beginning of El Salvador's civil war. Gunfire and a bomb exploded at his funeral. About 40 died. His tomb remains at the Metropolitan Cathedral of San Salvador.

The U.N. brokered a peace treaty that put an end to the war in El Salvador in 1992. Pope Francis set the stage for Romero's beatification last year. Violence and poverty still plague the Central American country. Most recently, the suffering sent unaccompanied undocumented children running to the U.S. for refuge. 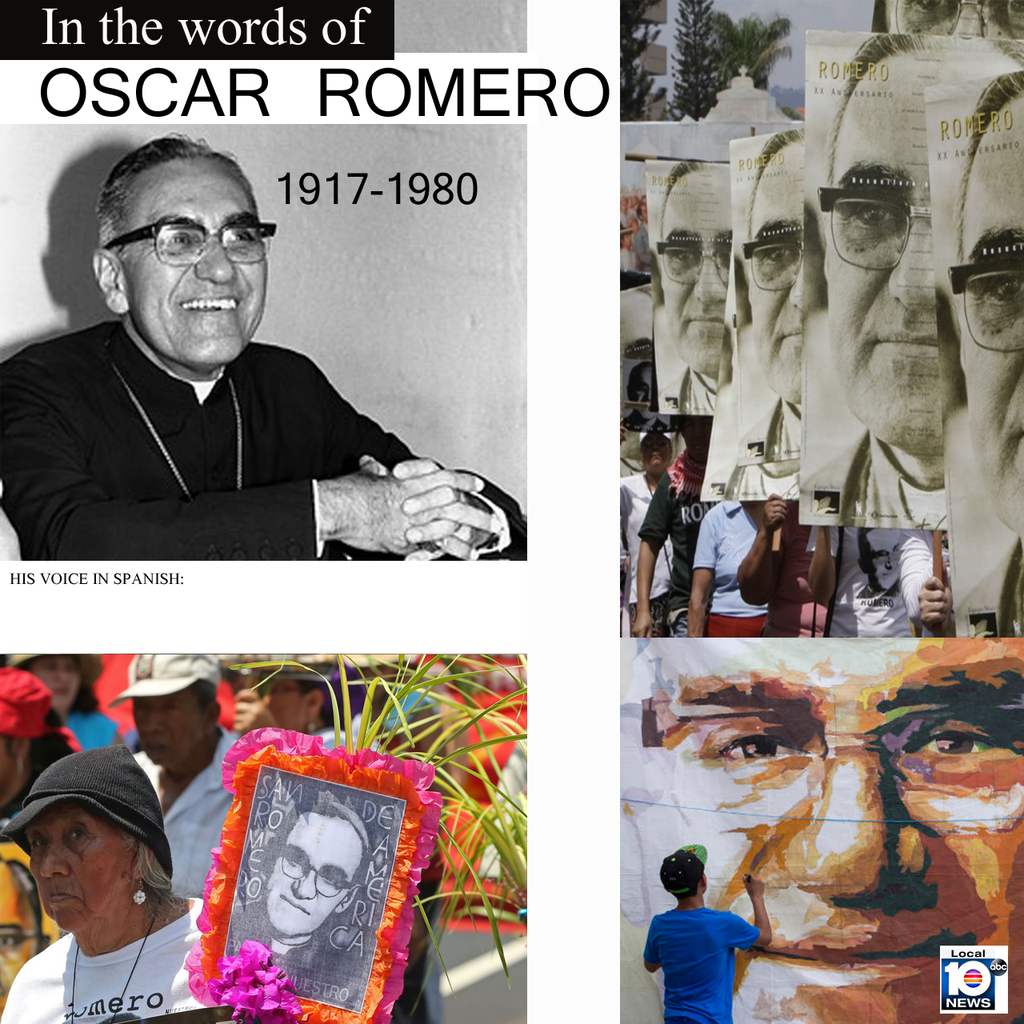