Miami Beach will no longer enforce last call at 2 a.m.

LOS ANGELES – A father in Los Angeles followed through with his threats to kill his son, prosecutors said Friday.

Police arrested Shehada Khalil Issa, 69, Tuesday at his North Hills home, after finding the bodies of his son and his 68-year-old wife. Prosecutors said the father had threatened to kill his son because he was gay.

Issa told police he shot his son Amir Issa, 29, in self-defense, but police said the evidence told a different story, according to Los Angeles Daily News. It was a premeditated hate crime, police said.

"The suspect made incriminating statements implicating himself in the death of [his son] and was arrested for murder," Operations-Valley Bureau homicide detective John Doerbecker said during an interview with the Los Angeles Daily News.

Doerbecker added the parents were evicting the son from the home, which he had reportedly vandalized. Police did not identify the female victim or said how she died.

Social media posts show an expletive-filled video where the father said his son should be "castrated" for being a "pervert." Before his father killed him, Amir Issa used Facebook to share his distress over "devil" or "evil spirit" manifesting itself through his family -- sister, brother, mother and father.

His last post March 19 was a desperate plea for help.

"I want to see Jesus. Please help rid this world of the demons that attack me," the 29-year-old said. "I have changed all of my life insurance and work retirement investments to go to the church I was born in."

Shehada Issa faces one count of premeditated murder. His arraignment is April 11. 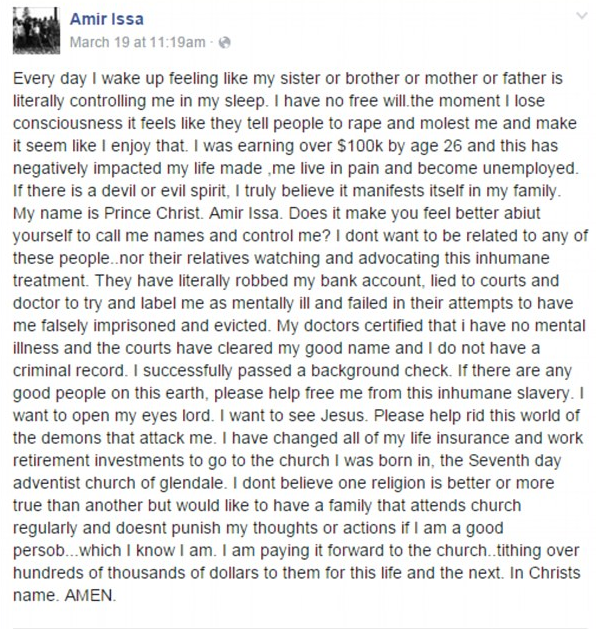