How accused Ponzi schemer may be hiding millions

MIAMI BEACH, Fla. – As wealthy investors worldwide are trying to find the fortune they entrusted to accused Ponzi schemer Alberto Chang, investigators in the case believe that, in a strategy out of Bernie Madoff's playbook, Chang spent millions on donations to gain the trust of new clients.

Former Miami socialite Ariel Stein has emails from their romantic relationship showing that Chang asked for his expertise as a certified diamond specialist. Stein said Chang spent millions in watches, luxury pens, cars and modern art. He had properties in Chile, the British Virgin Islands, the United States and Australia.

During the couple's visit to meet Sir Richard Branson of the Virgin Group at Necker Island, Stein said Chang was known  as a Google seed investor and a Stanford graduate. At the Château de Balleroy in France, Stein introduced Chang to his friend, Christopher "Kip" Forbes, with the same credentials. He would later regret it.

"I found out so much that he got so nasty with me. It was very scary and life-threatening for a moment," Stein said in an email warning Forbes in 2014. "I immediately left London. I am fine and safe, but please be cautious with him, as he is out for connections and his business is not so clean."

Two years later, the U.S. Securities and Exchange Commission is investigating Chang for violations of federal securities laws. The disgraced founder of Grupo Arcano -- a venture capital firm with former offices in Miami Beach, Santiago, London and Sydney -- is already wanted in Chile on charges of fraud, money laundering and banking law violations.

Authorities tracked Chang to Malta, a tiny archipelago in the Mediterranean, as panic ensued among Chang's associates after his mom's arrest in April. A former employee who asked to remain anonymous said Chang was getting ready to target Chinese investors out of his office in Sydney when Chilean authorities froze his bank accounts and started to liquidate his assets.

Chilean authorities also arrested his mom and business associate, Veronica Rajii, while she was trying to leave the country. She faces charges of fraud and banking law violations. Penalties for white collar crime are more severe in the U.S. than in Chile. SEC investigators said they have evidence that Chang misspent millions that belonged to his investors.

According to the SEC "Chang may be operating an offering fraud scheme through Onix and Grupo Arcano." The SEC claims to have evidence that he "transferred over $7.5 million of funds from Onix bank accounts to his personal bank accounts since 2012" and "squandered" it on "dining, lodging and travel, including at least $1.8 million on leasing a Gulfstream G450 aircraft."

Chang's attorneys were trying to prevent SEC investigators from getting to his records with JP Morgan Chase Bank and from sharing them with Chilean authorities. In a letter, Chang said many of the transactions were reimbursements and loans. But a federal judge sided with the SEC May 18.

SEC investigators claim in reality Chang raised at least $4 million, while guaranteeing rates of return ranging from 9.6 percent to 43 percent. Investigators in Chile believe Chang inflated his credentials and promised high dividends to capture some $242 million in the last six years alone.

Prosecutors in Chile estimate he failed to invest about $80 million as promised. Some investors said they fear they will never see their millions again.

In Miami Beach, Chang purchased his luxury condo at the Il Villagio under G. South Beach, a Florida corporation. Records show Chang registered at least a dozen other corporations in Florida. Investigators said some of Chang's corporations were used to move funds from corporations in the British Virgin Islands, where according to a former associate he bought a property on Mosquito Island last year.

Stein remembers Chang bragged about not having to pay taxes in any country and about being "prepared for emergencies" with an elite UBS white card."The things he was doing just weren't right. They didn't add up. I told a lot of people that I thought he was doing something wrong," Stein said adding that no one listened. "Things just didn't match up. ...  I knew one day investors would probably pull out." 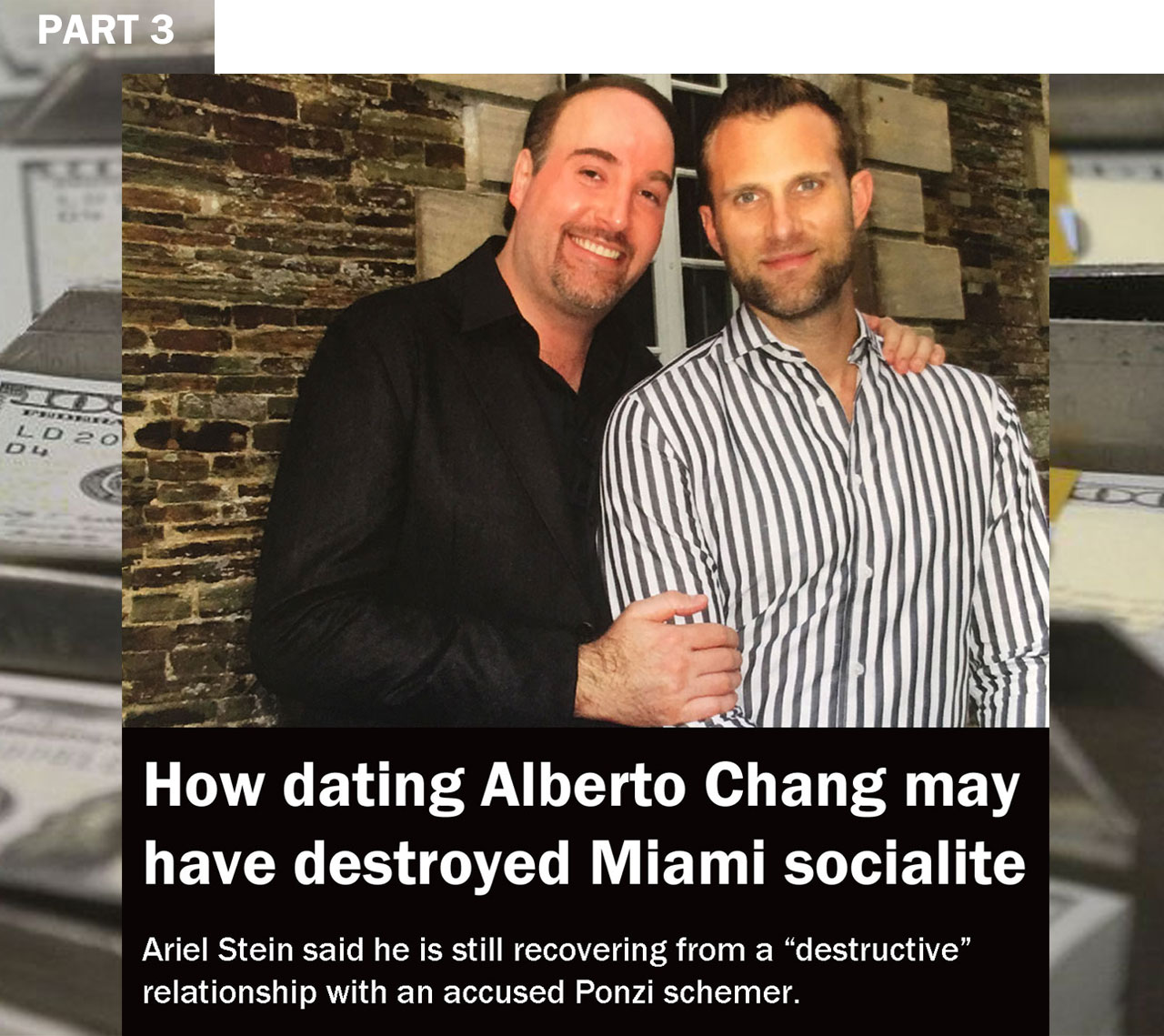 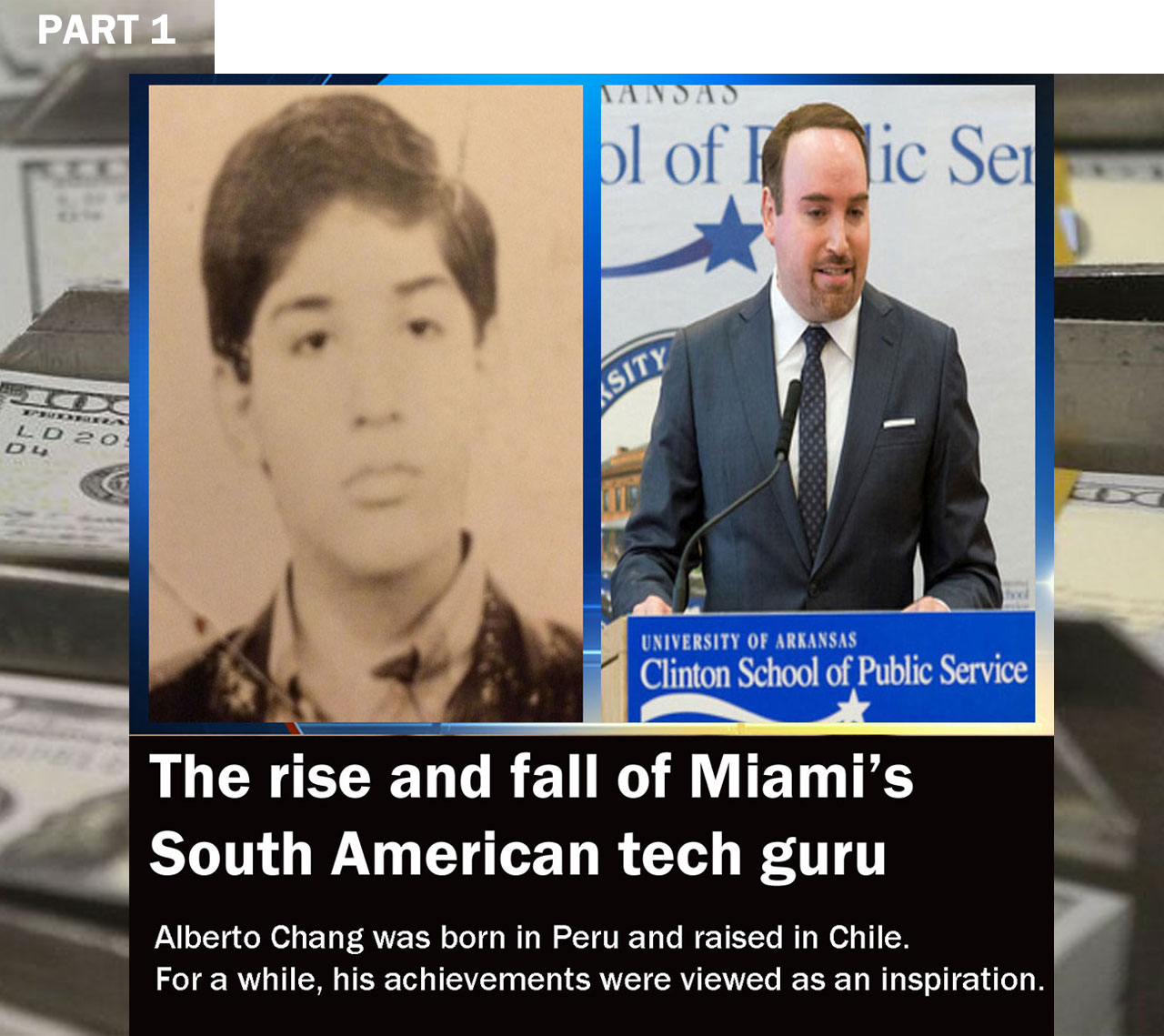