At least 10K turn out to Women's Rally of South Florida, dozens march on I-95

MIAMI – After 10,000 filled the Bayfront Park Amphitheater, thousands more crowded outside in downtown Miami on Saturday.

They marched on Biscayne Boulevard and the City of Miami police officers were asking drivers to avoid Brickell Avenue. There were traffic delays on Interstate 95 and Interstate 395.

The protesters, aiming to send a message to President Donald Trump, were chanting: "My body, my choice" and "The people united will never be divided."

The Women's Rally of South Florida and the downtown Miami march were among the many events worldwide that were staged in solidarity with the historic Women's March in Washington.

During the march, the Florida Highway Patrol had a warning for protesters.

"Any individuals participating in a protest attempting to block highways or Interstates, or interfering with the regular flow of traffic will be subject to arrest," FHP Lt. Yodany Veloz said in a statement. 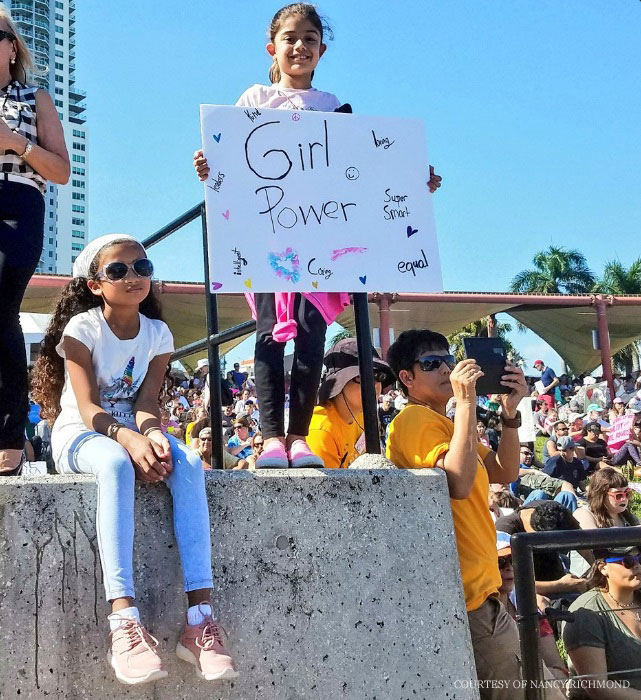 Samantha Moyo looked out at the tens of thousands of marchers sardined into London's Trafalgar Square with a look of contentment, even bliss.

The 30-year-old Londoner, originally from Zimbabwe, was overwhelmed by the size of the crowd, and its determination to challenge Trump's world view.

"I'm a black, immigrant bisexual woman, and the fact that women all over the world are standing up for what they believe in, and that I was invited to be on the front line, feels like a huge privilege," she said after helping to lead the march that snaked through central London, stopping traffic at times in the metropolis.

"I have a feeling of love and excitement in my heart, thinking of how far we've come."

Moyo said she was initially worried about Trump's policies but has come to believe he will inspire resistance.

"I just feel a huge amount of celebration and optimism for the future," she said.

Police described the event as entirely peaceful with no arrests.

Protesters, including many men, displayed a grab-bag of grievances about the new president's policies. Some criticized his view on climate change and the proliferation of nuclear weapons. Others cited his treatment of women and minorities.

So many people turned out for the women's march in Chicago that organizers had to cancel the march portion.

They say the planned march through downtown was no longer possible due to public safety concerns, but they instead extended the rally at Grant Park.

Dorothy DeCarlo was among the throngs of people who gathered near the park. The 69-year-old burned her bra for women's rights in college 50 years ago and said it was shameful that Saturday's marches and rallies were even necessary.

"I thought we took the bruises. I thought it was over," she said.

Several thousand people, including many American workers and students living in France, gathered in the Eiffel Tower neighborhood in a joyful atmosphere.

They sang and carried posters with slogans such as "We have our eyes on you Mr. Trump" and "With our sisters in Washington."

Anne Tiracchia, from Stroudsburg, Pennsylvania, was on vacation in France where her son lives. In French, she wrote "Let us resist the catastrophe" on a U.S. flag.

"It's important because Trump wants to destroy 50 years of progress, he wants to go back to smoke coming out of factories and women staying home and having babies," Tiracchia said. "He won't change. He doesn't care. But we have to show we don't agree with him."

More than 40 feminist and anti-racist groups organized the Paris march.

Demonstrators crammed near Trump World Tower for the Women's March on New York City say the new president may be from there — but he's no New Yorker.

"New York is a community in itself, and people care about each other, and it's diverse," said Ashia Badi, 44, who brought her two daughters to Midtown Manhattan to march in protest of Trump. "He doesn't feel like he has those New York values I see."

Patricia Palermo, one of six women wearing surgical masks that say "save the ACA" (Affordable Care Act) said she would fight Trump's effort to eviscerate the law. She said she met the president once doing real estate .

New Yorkers know Trump, she said. "That's why most New Yorkers are against him. We've seen him in person."

Rebecca Munnerlyn had never marched at the South Carolina Capitol before. But when she listened to Trump's inaugural speech she knew she had to join thousands of other women marching Saturday.

Several thousand women filled the Statehouse steps with signs like "Make America Think Again" and "You Can't Comb Over Sexism." They chanted "Black Lives Matter" and "Health Care For All" before walking around the capitol grounds and to a nearby business to plan for more protests.

Demonstrators flooded a popular central Sydney park carrying placards with slogans including "Women of the world resist," ''Feminism is my trump card" and "Fight like a girl."

Organizer Mindy Freiband told the crowd hatred, bigotry and racism are not only America's problems.

"This is the beginning of something, not the end," she said.

Protester Alyssa Smith, who came with her husband and 2-year-old daughter, said she worried about the future after Trump's election. She said she didn't want her daughter growing up in the world "where hatred is commonplace."

Charlotte Wilde said she shed tears watching Trump get sworn in. The 33-year-old said the businessman's rise to the presidency left her in a state of horror, and attending Saturday's rally was a way to feel empowered.

A plane was seen skywriting "TRUMP" over the rally.

Sarah Gospodar likened the chilly, damp rally at Trenton's War Memorial to the civil rights marches of the 1960s, when people came together peacefully to effect change.

"As a middle-aged black woman, I've seen a lot in my life — things that divided this country and things that united it," the 53-year-old Ewing woman said. "And these issues we address today are things that should unite us. How can anyone be against equal pay and fair and equal rights for all Americans?"

Gospodar acknowledged she's no fan of Trump but said she will give him the chance to "show he really does want to make America great." She said if Trump's opponents want respect for their views, they must show the president and his backers the same respect.

Mary Morrisey, 35, of Trenton, said she didn't mind standing in the cold because the demonstration was an opportunity to make things better for people across the nation, especially LGBT people and minorities. She held a handmade sign that read "Girls just want to have fundamental rights."

"We may go about things differently, but we all want the same thing: life, liberty and the pursuit of happiness," Morrisey said.

Dozens attended a "solidarity picnic" in Yangon organized by Alyssa Paylor of Colorado and other U.S. expats.

"We're not able to have a march in this climate, so we wanted to just gather together in solidarity with our sisters and brothers marching in Washington and all across the world because of what we believe in," said Paylor, 26. She is in Myanmar working for an organization called Mote Oo Education for Curriculum Development.

"I think these things have energized a lot of people and made many people, especially women, very angry about what they may have to deal with in the coming years," she said.

Hundreds gathered in freezing weather in a busy city square in the Czech capital of Prague, waving portraits of Trump and Russia's Vladimir Putin and holding banners that read "This is just the beginning," ''Kindness" and "Love."

"We are worried about the way some politicians talk, especially during the American elections," organizer Johanna Nejedlova said.

Marchers there included many celebrities gathered for the Sundance Film Festival, including Chelsea Handler and Benjamin Bratt. A steady snow fell as marchers headed past one of the festival's theatres.

At a rally in Concord, author Jodi Picoult told the crowd, "We in New Hampshire are not in the habit of going in reverse. We have the backs of those who are less fortunate — who may be struggling for health care, for environmental rights, for racial equality, for a fair wage, for justice.

"We are in this together. And we know that change does not come from the top down, but from the bottom up."