Dolphins set to kick off home opener at Hard Rock Stadium, but with new safety guidelines for attending fans

Timeline: How the Never Again movement gained momentum after tragedy

PARKLAND, Fla. – After about an hour of the the Valentine's Day massacre at Marjory Stoneman Douglas High School, President Donald Trump tweeted.

"My prayers and condolences to the families of the victims of the terrible Florida shooting," Trump wrote. "No child, teacher or anyone else should ever feel unsafe in an American school."

Sarah Chadwick was still trying to figure out who had died and who was injured at her school when she read the tweet and responded in anger.

"I don't want your condolences, you [expletive] piece of [expletive], my friends and teachers were shot. Multiple of my fellow classmates are dead," she wrote. "Do something instead of sending prayers. Prayers won't fix this. But gun control will prevent it from happening again."

The survivor was the first student from Marjory Stoneman Douglas High School to publicly challenge a politician to take action on gun legislation. Her brazen tweet went viral and is now seen on T-shirts and signs during events organized by activists from the Never Again movement. 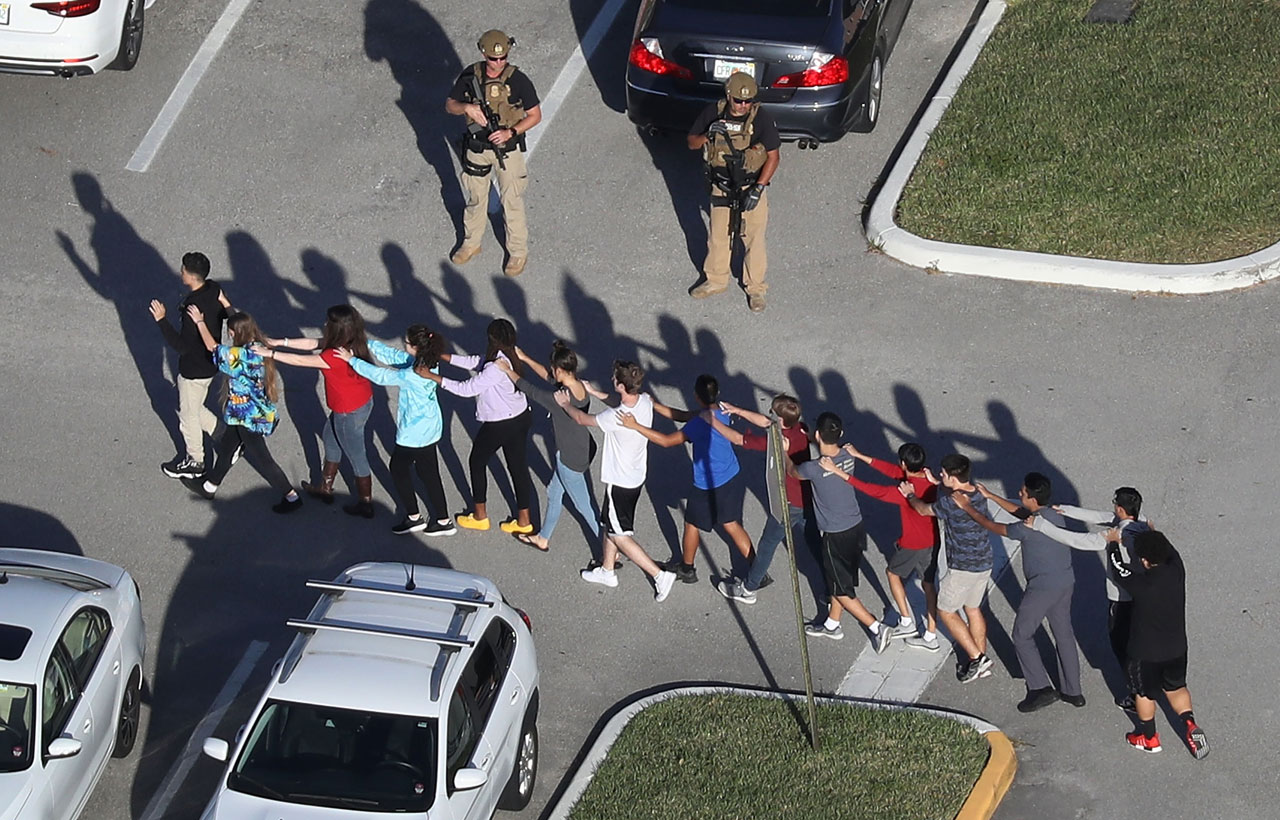 Florida Gov. Rick Scott visited Marjory Stoneman Douglas High School the night of the shooting. He held a news conference with Broward Sheriff Scott Israel and Broward Schools Superintendent Robert W. Runcie. In the eyes of some parents, these leaders had failed them. Scott had a high rating from the National Rifle Association, a nonprofit that advocates for gun rights. 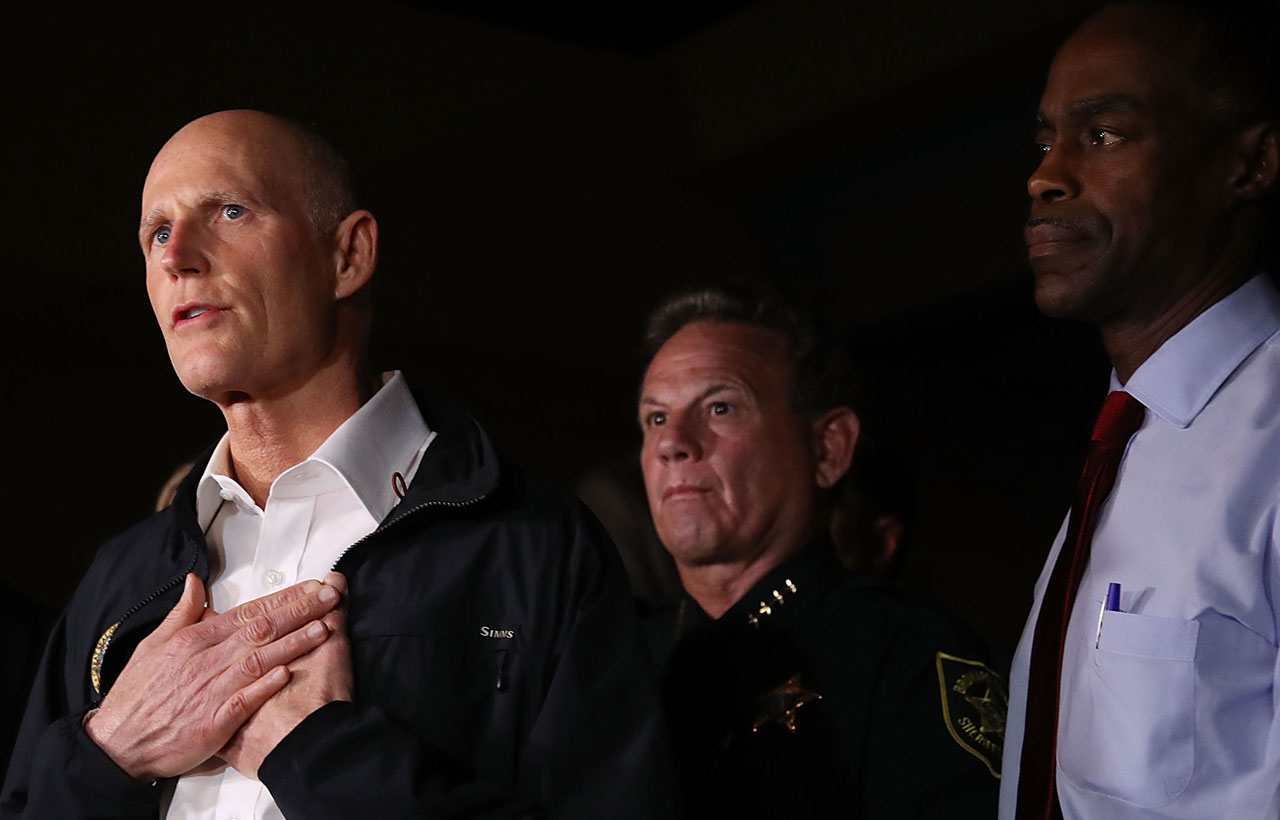 A day after the shooting, some of the Marjory Stoneman Douglas High School students who survived the shooting talked to reporters who descended to Parkland in droves. Kelsey Friend, a freshman, said that she heard the shot that killed geography teacher Scott Beigel, after he unlocked his classroom to save her life.

"If his family is watching this, please know that your son or your brother was an amazing person and I am alive today, because of him," Kelsey said in tears. "Thank you."

Senior David Hogg, whose mom, Rebecca Boldrick, is a Broward County Public Schools teacher, and dad, Kevin Hogg, is a former FBI agent, said he was in class when he told his teacher the "pop" sounds they were hearing were gunshots. They were trying to leave the building when a janitor stopped them from heading in the direction of the shooter. A culinary arts teacher pulled him inside a classroom and he hid in a closet. He and his little sister, who is a freshman at the school, survived the shooting.

"Students are dying trying to get an education. That's not OK! That's not acceptable! We are children," David said. "You guys are the adults." 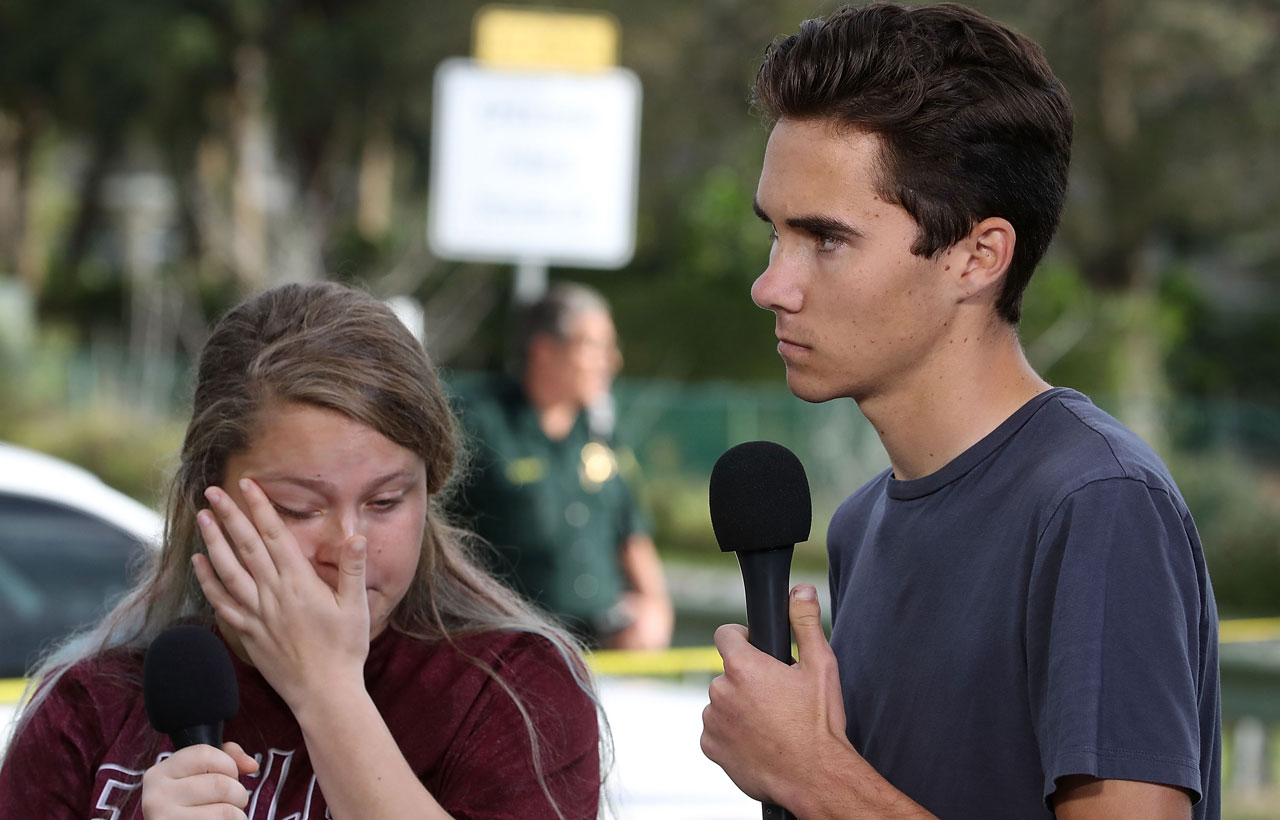 Trump spoke at the White House about the school shooting for about 7 minutes without mentioning gun control. His statement came a few weeks after McClatchy reported that the FBI was investigating if a top Russian banker with ties to the Kremlin had illegally funneled money to the NRA to help Trump get elected.

"Our entire nation, with one heavy heart, is praying for the victims and their families," Trump said from the diplomatic room. 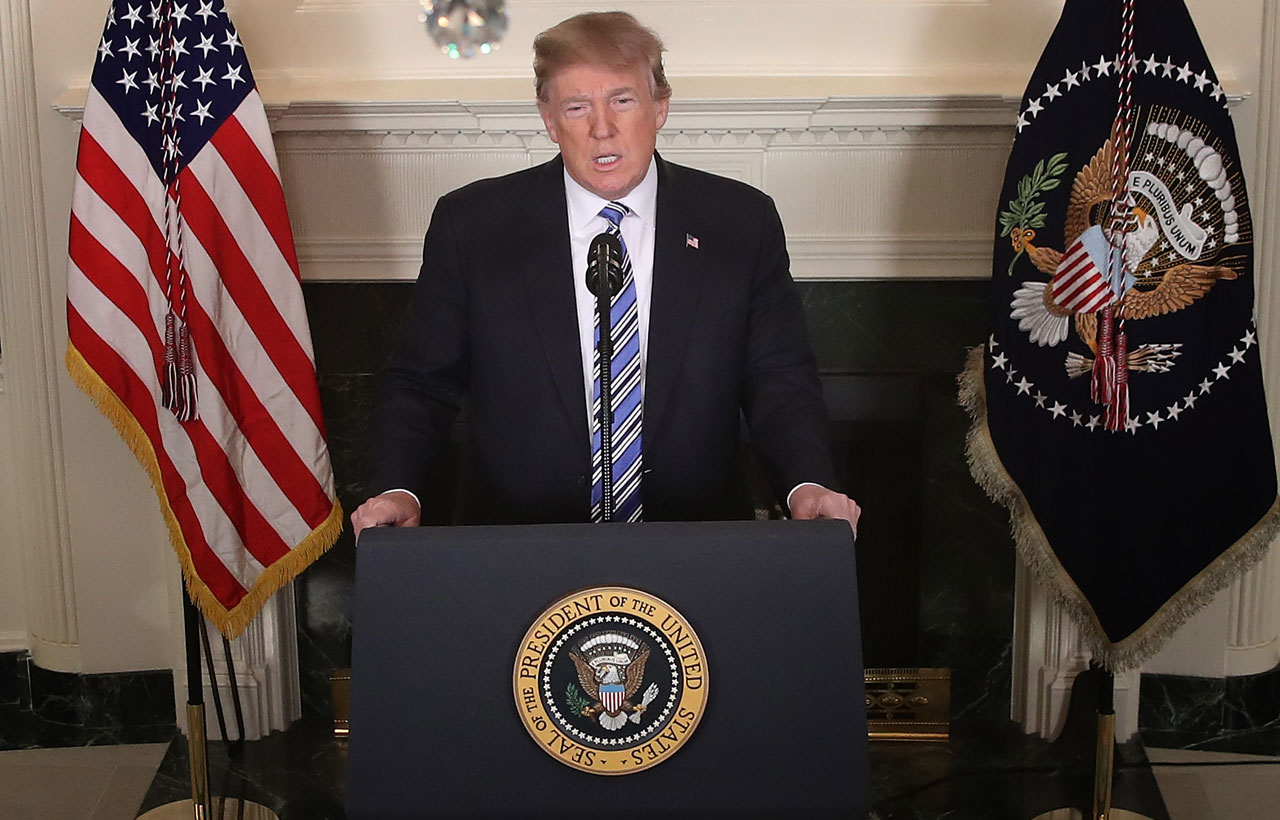 A mother's message to Trump went viral shortly after. Lori Alhadeff was at the Pine Trails Park memorial after learning that her 14-year-old daughter, Alyssa Alhadeff, was dead. She decided to talk to reporters.

"How do we allow a gunman to come into our children's school? How do they go through security? What security is there? There is no metal detectors. The gunman, a crazy person, just walks right into the school, knocks down the window of my child's door and starts shooting. Shooting her and killing her," she said. "President Trump, you say 'What can you do?' You can stop the guns from getting into these children's hands, put metal detectors at every entrance to the schools. What can you do? You can do a lot. This is not fair to our families. That our children go to school, and have to get killed. I just spent the last two hours putting the burial arrangements for my daughter's funeral."

A sea of candles filled  Pine Trails Park during a candle vigil attended by thousands. Fred Guttenberg, a distraught father, stood in front of the crowd to talk about his daughter, Jennifer, who was also among the 17 killed during the Valentine's Day massacre.

"I don't always get to say I love you," said Guttenberg, who was mourning the death of his 14-year-old daughter, Jennifer Bloom Guttenberg.  "I don't remember if I said that to Jaime yesterday morning." 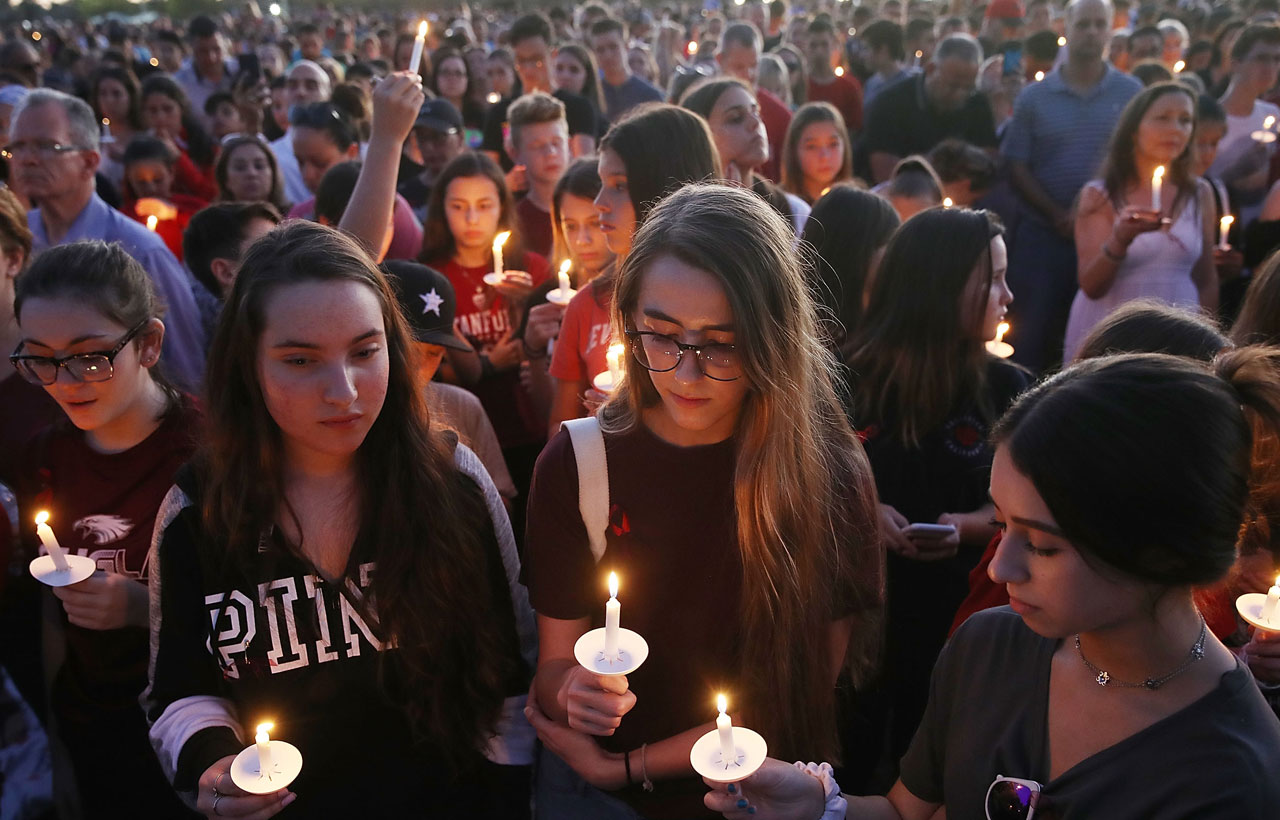 Students attended the funeral of 14-year-old Alyssa Alhadeff at the Garden of Aaron at Star of David Memorial Gardens. 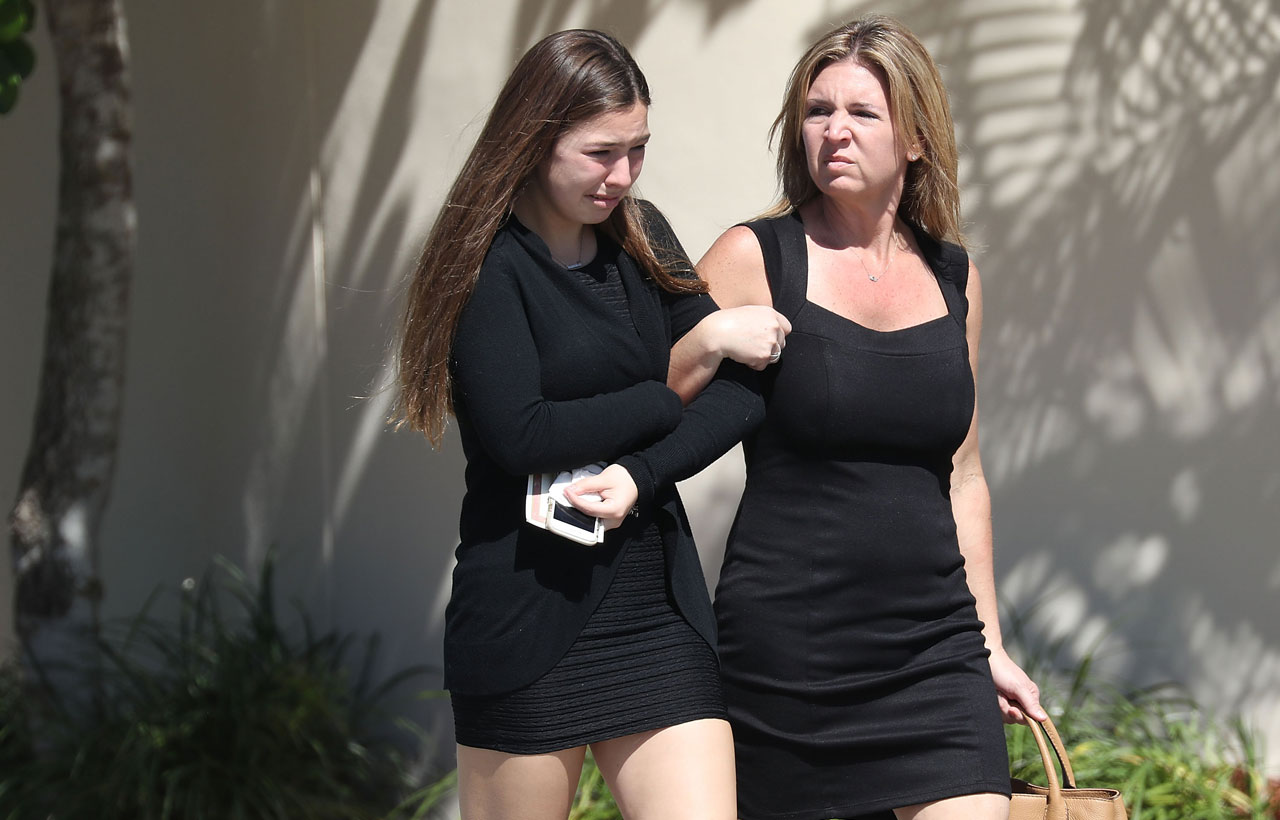 Students attended the funeral of 18-year-old Meadow Pollack at the Jewish congregation of Kol Tikvah. 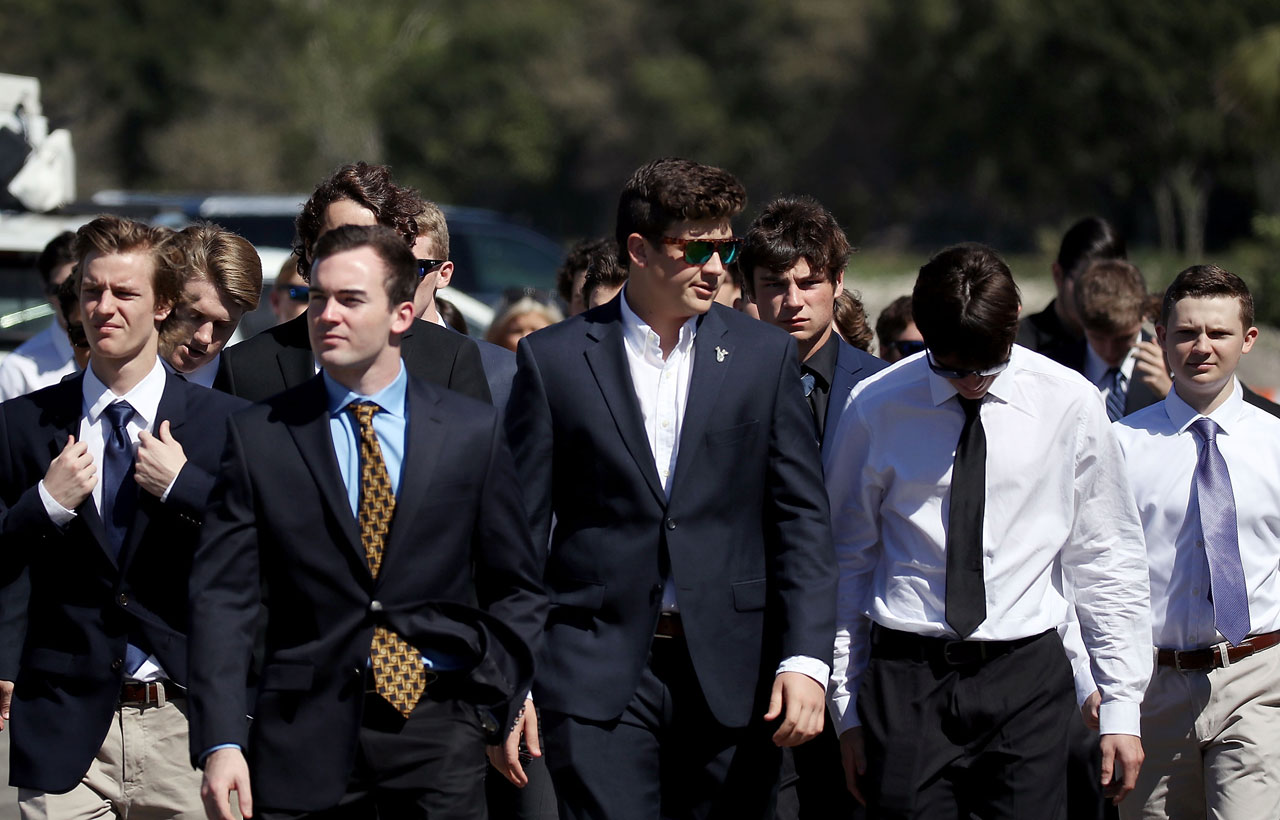 Students continued to visit the memorial at  Pine Trails Park to pray and leave messages and gifts at the 17 crosses set up for the victims and the cross set up for the gunman. 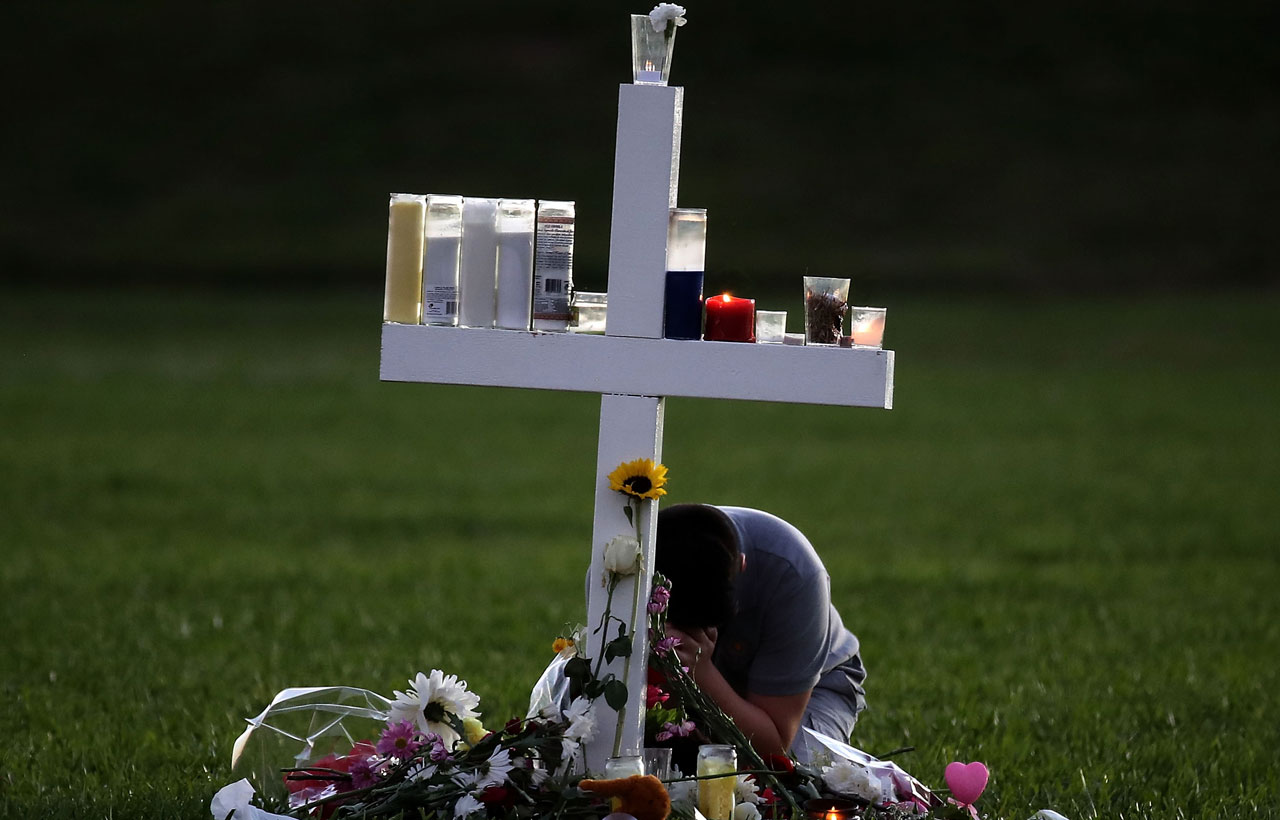 Emma Gonzalez, a Marjory Stoneman Douglas High School student, read a 10-minute speech during a gun-control rally in front of the federal court building in Fort Lauderdale.  The 18-year-old senior led the crowd in chants of "No more BS!"

Students attended the funeral of Scott Beigel, a geography teacher from Marjory Stoneman Douglas High School who was killed while helping students find refuge in his classroom. The service was at Temple Beth-El in Boca Raton. 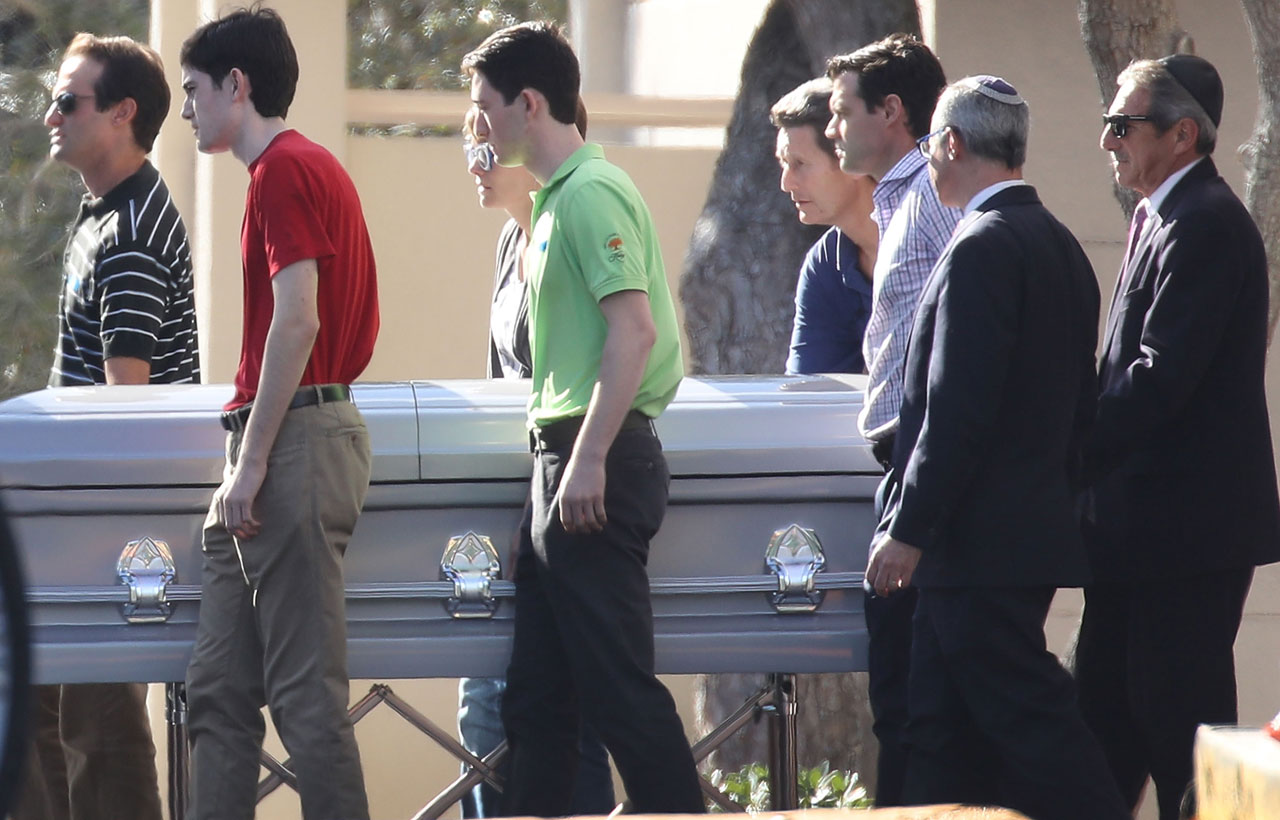 The funeral service for Alaina Petty was held at the Church of Jesus Christ of Latter-day Saints in Coral Springs. The JROTC member 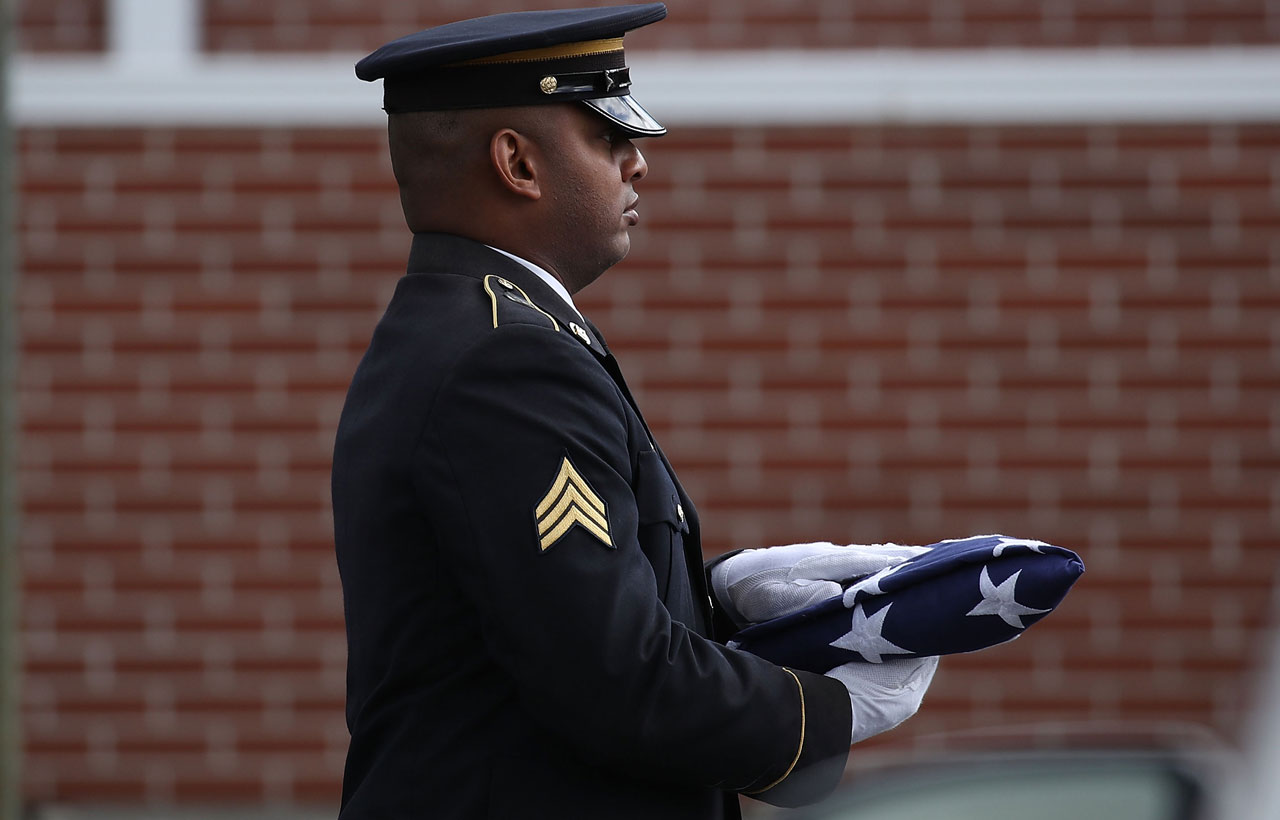 While funerals continued and memorials were growing both at the school and at a nearby park, Tyra Heman, a senior at Marjory Stoneman Douglas High School, stood in front ot the school holding up a sign with the hash tag "Gun Reform Now." 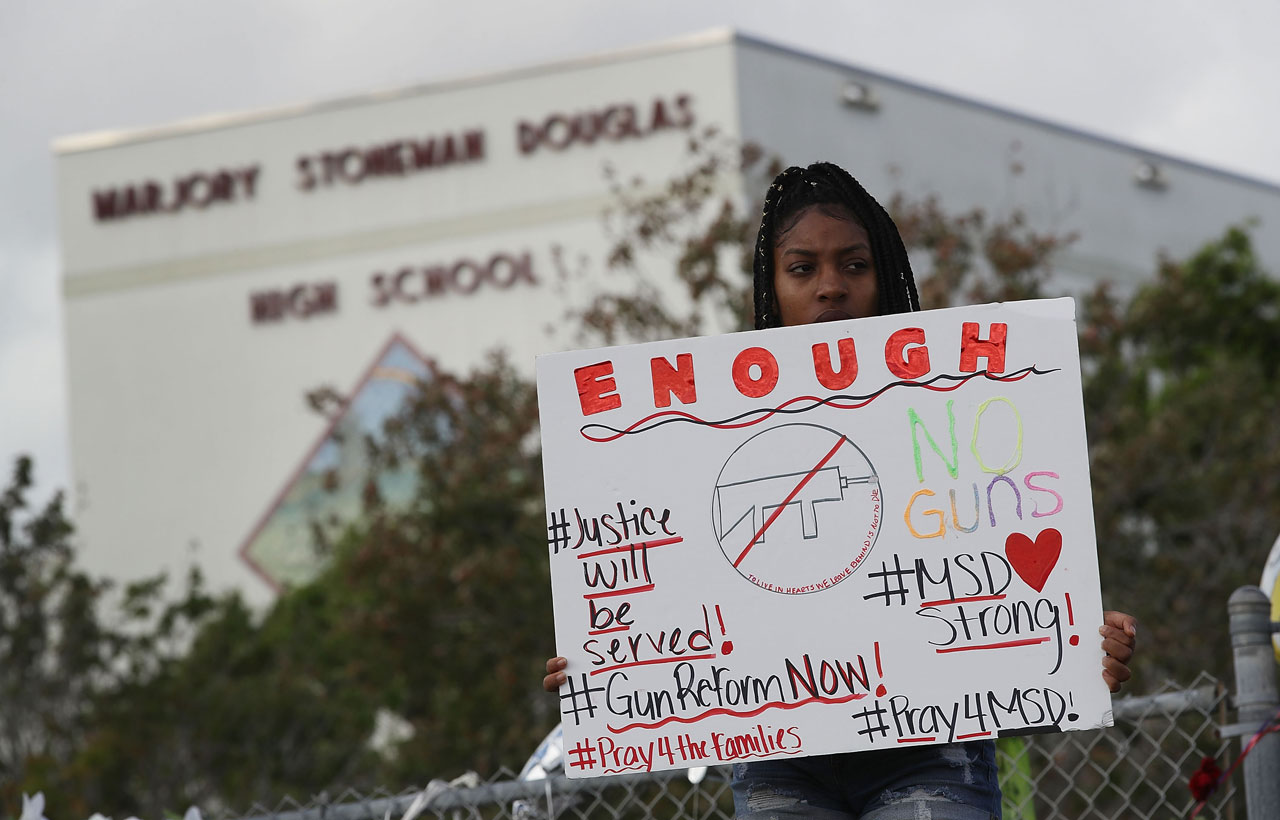 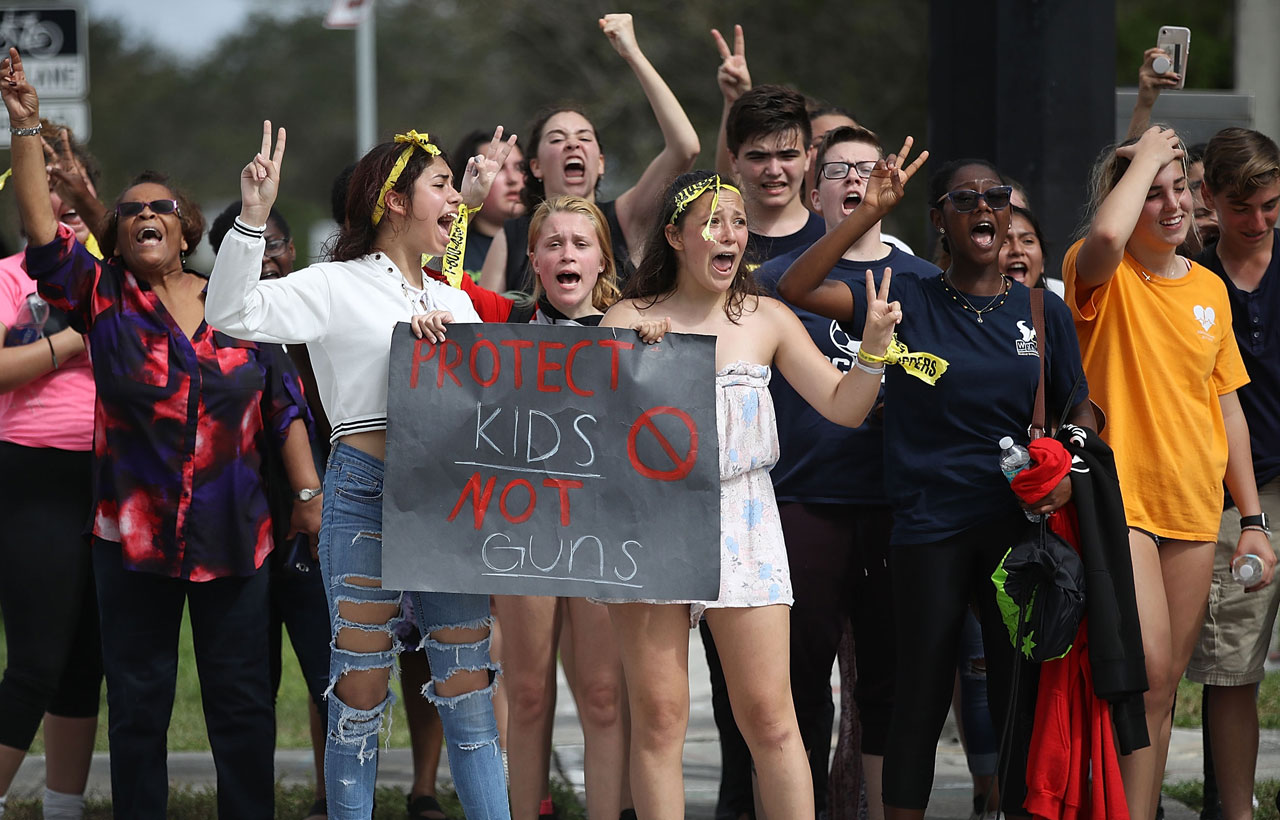 On the day of Marjory Stoneman Douglas High School athletic director Chris Hixon's funeral, students traveled to Tallahassee and Washington, D.C., to protest for the National Rifle Association's influence on legislators and demand a ban on assault weapons. 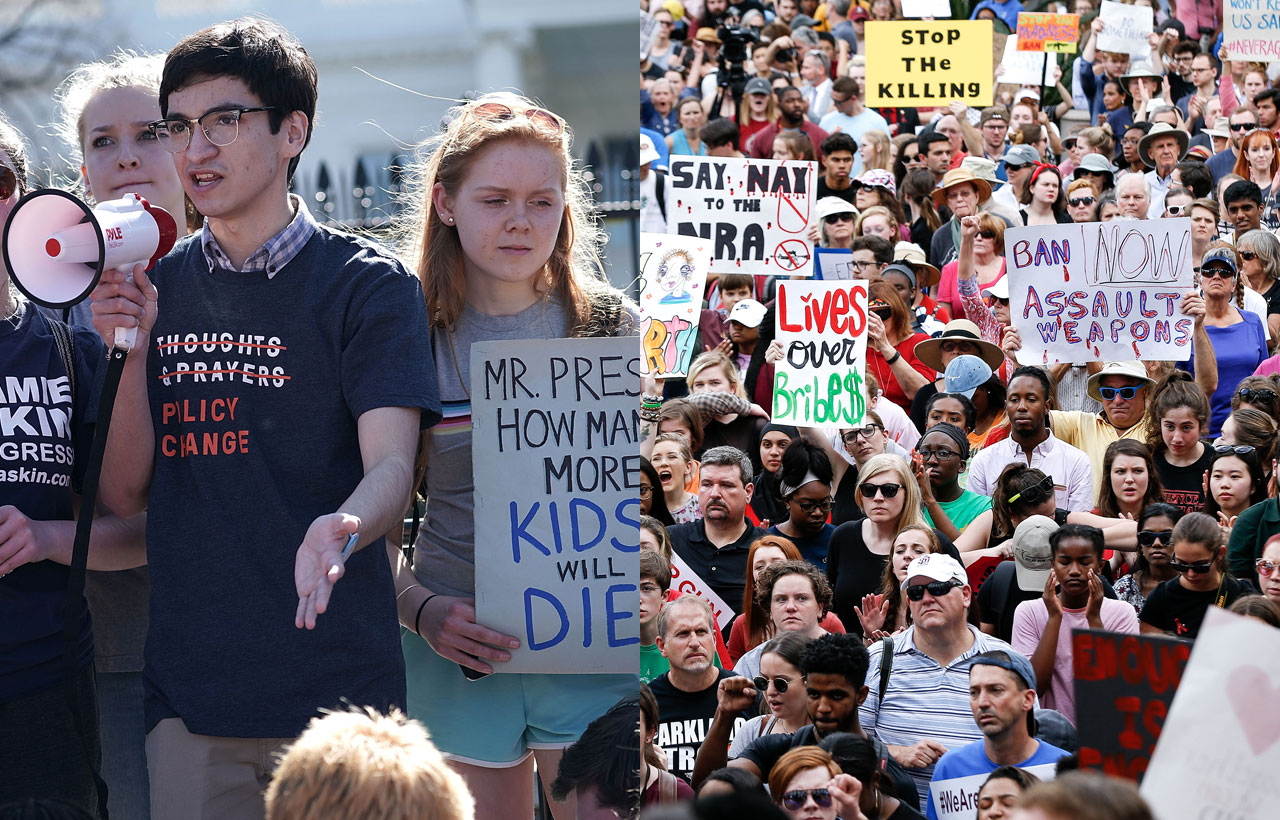 ""How do we not stop this after Columbine and Sandy Hook?" 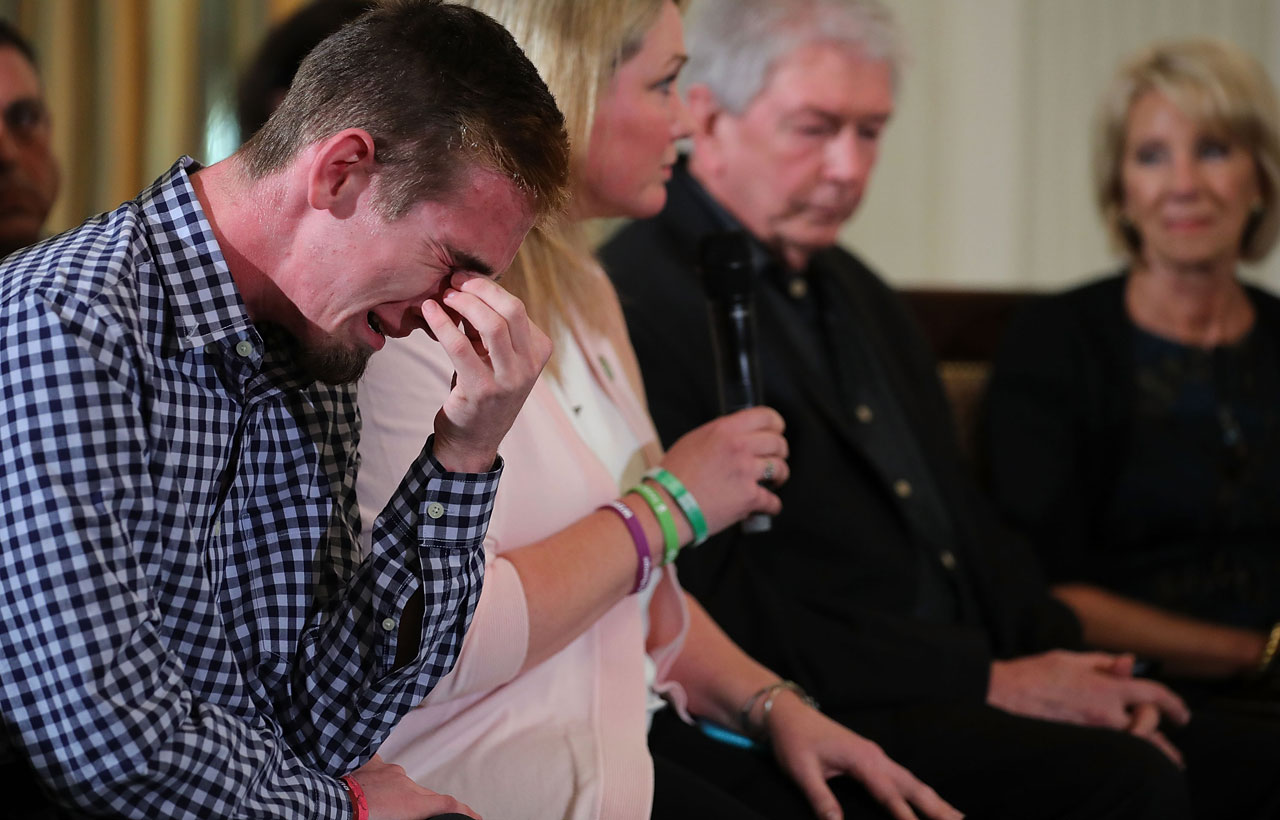 Marjory Stoneman Douglas students travel to Tallahassee to speak at the Florida State Capitol and to demand gun control legislation. 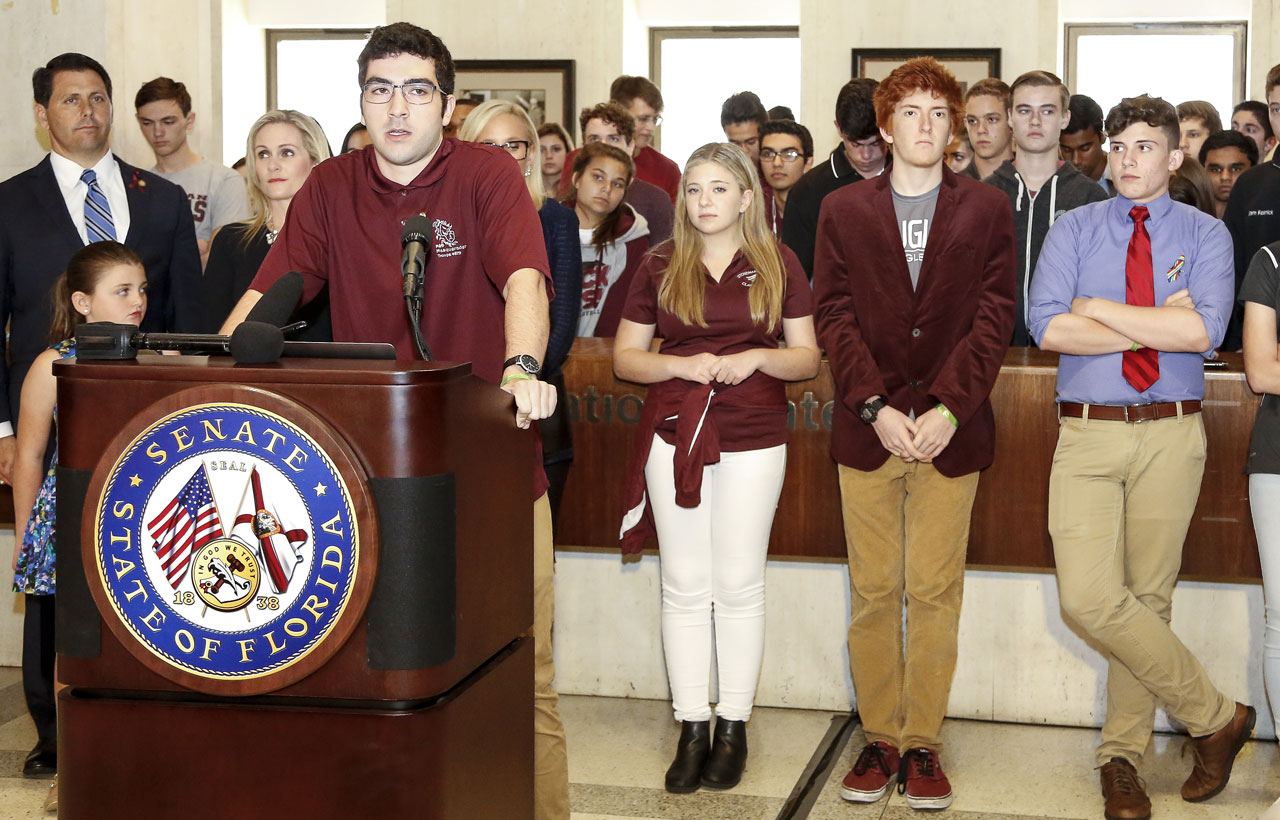 Students attended the funeral of Marjory Stoneman Douglas' assistant football coach Aaron Feis, who instead of hiding or running away, tried to save as many students as he could before he was killed. 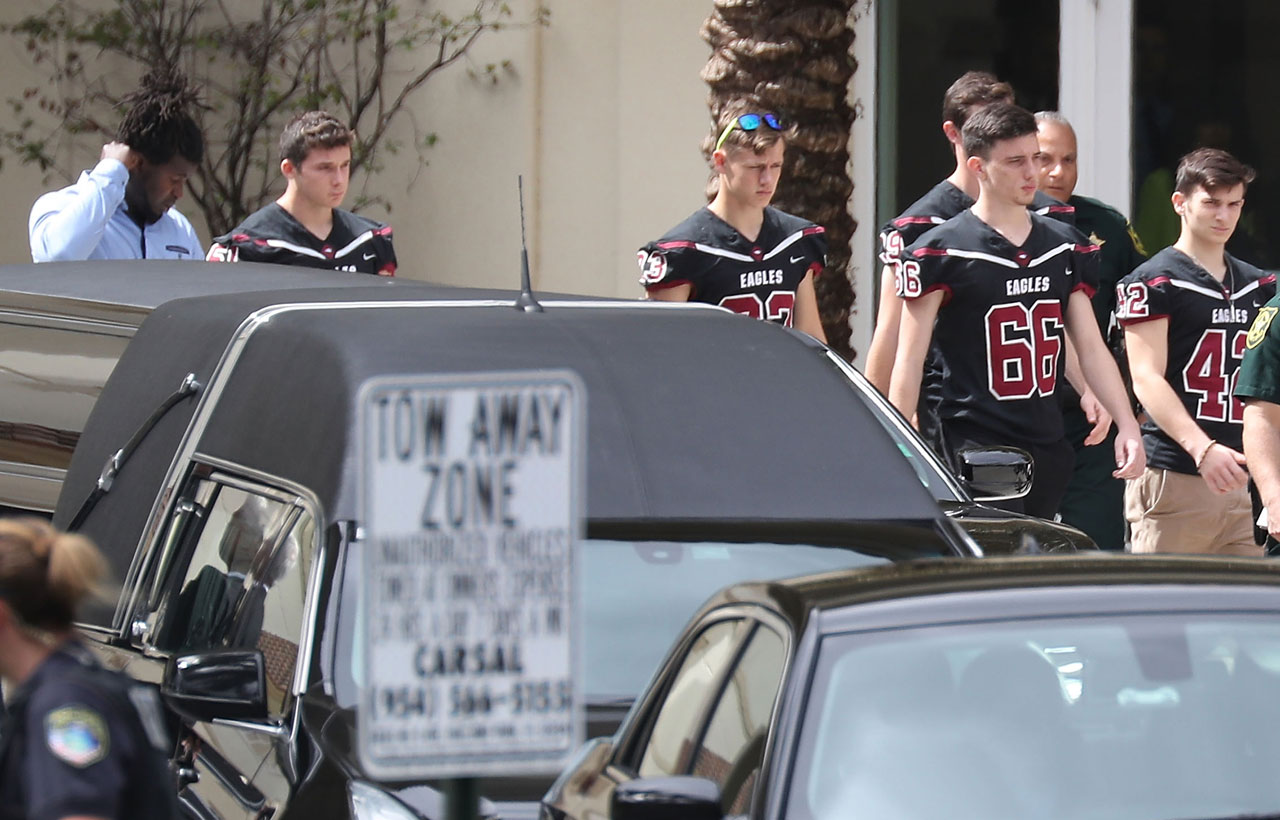 Deerfield Beach High School Students walked about 11 miles to Marjory Stoneman Douglas High School to show their solidarity, as teachers and staff returned to the school for the first time since the shooting. 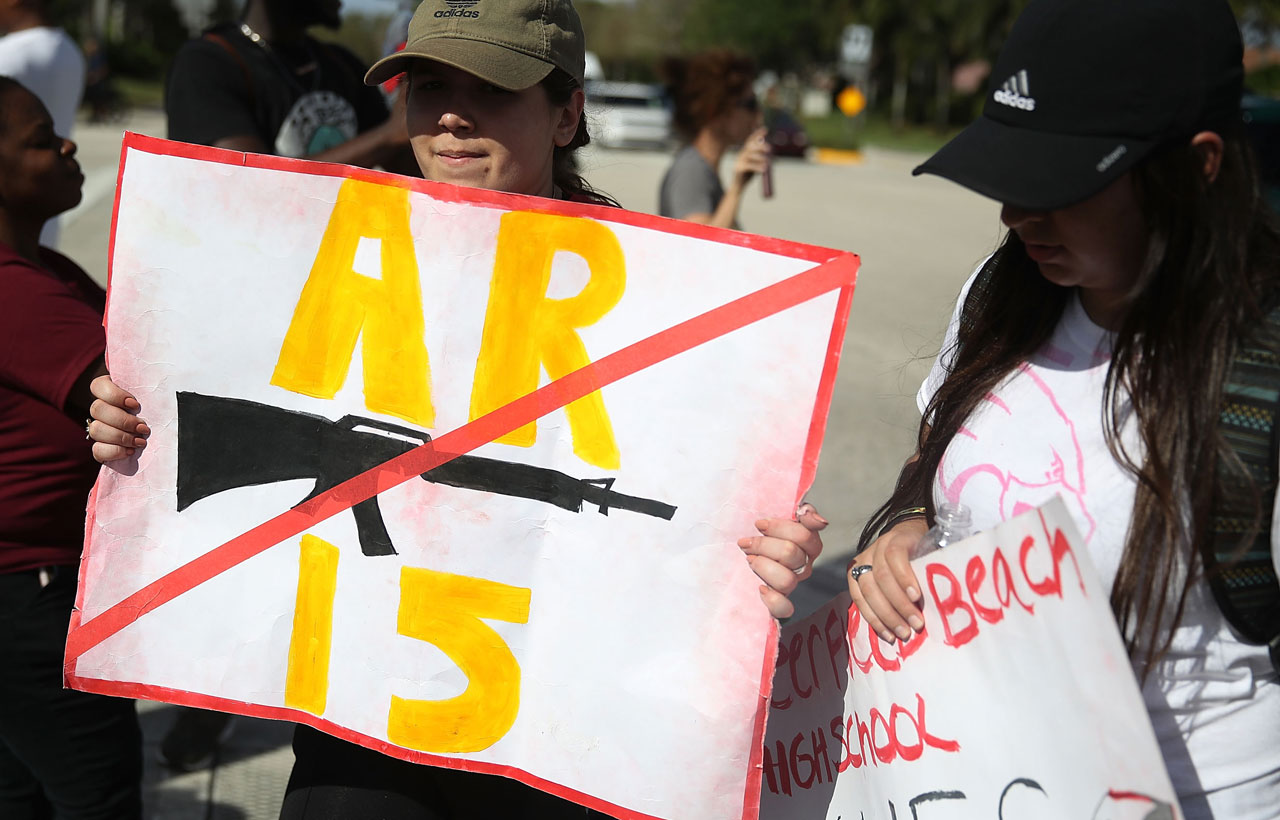 The Los Angeles Dodgers honors the victims of the school shooting during a game against the Kansas City Royals. 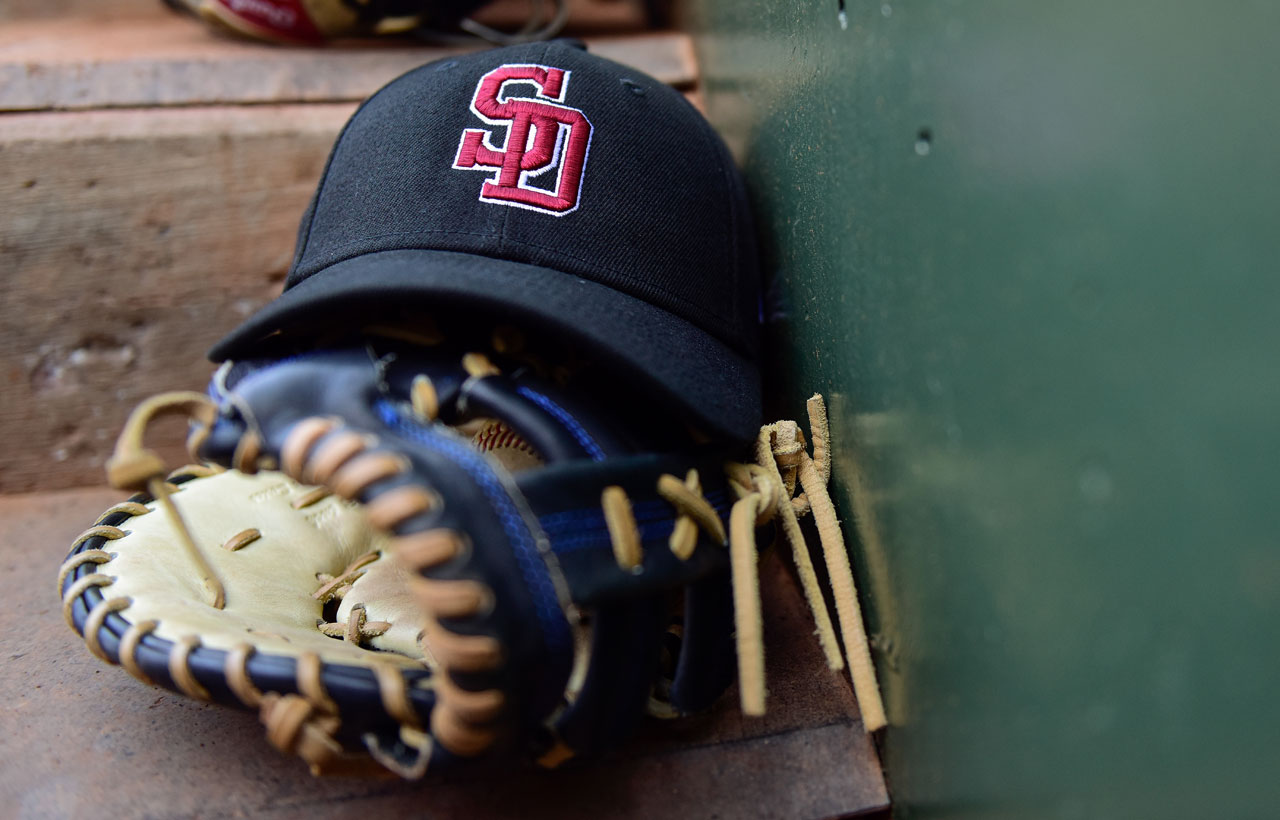 Students are allowed to return to school three days before they have to return to class. The school is surrounded by signs of support from around the country. 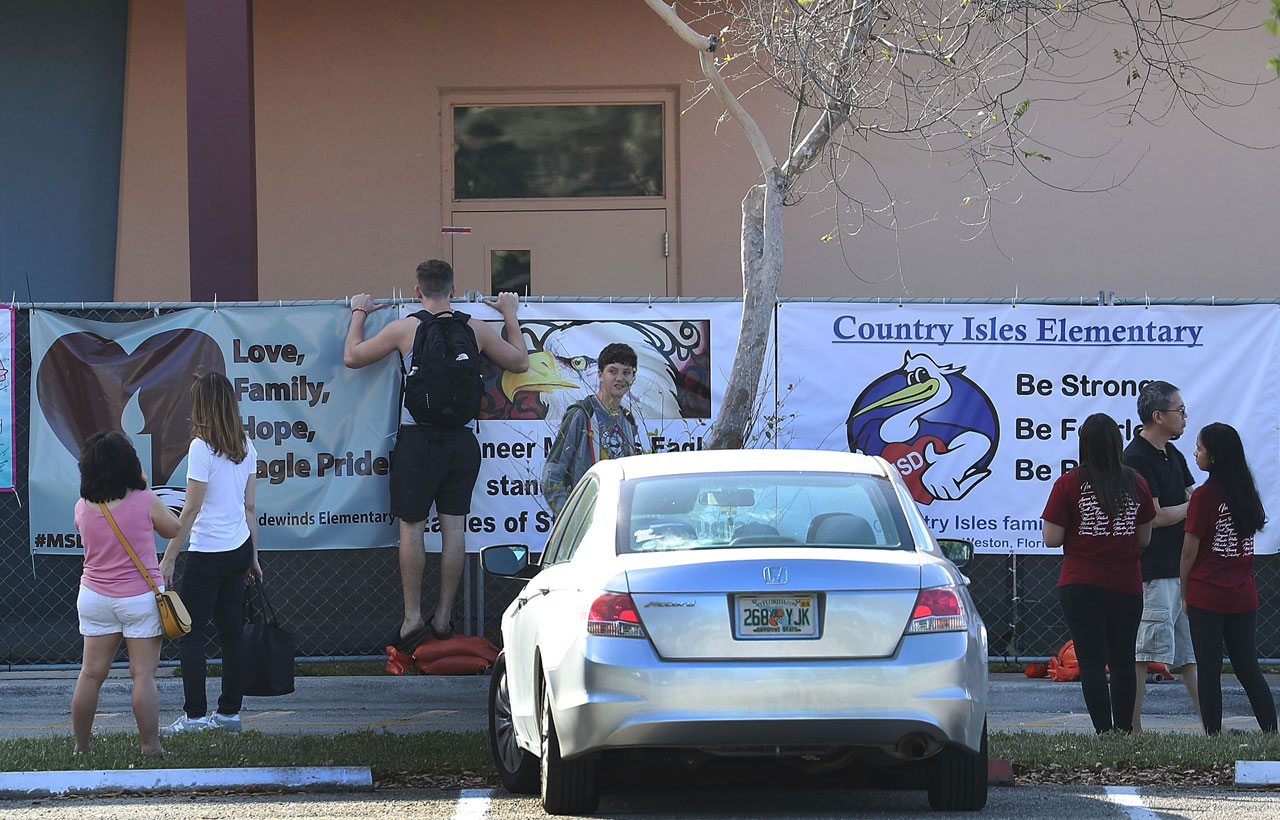 School shooting survivor Maddy Wilford talks to reporters at Broward Health North about her recovery. She thanked Coral Springs Fire Department Lt. Laz Ojeda, who was in tears, for helping to save her life. 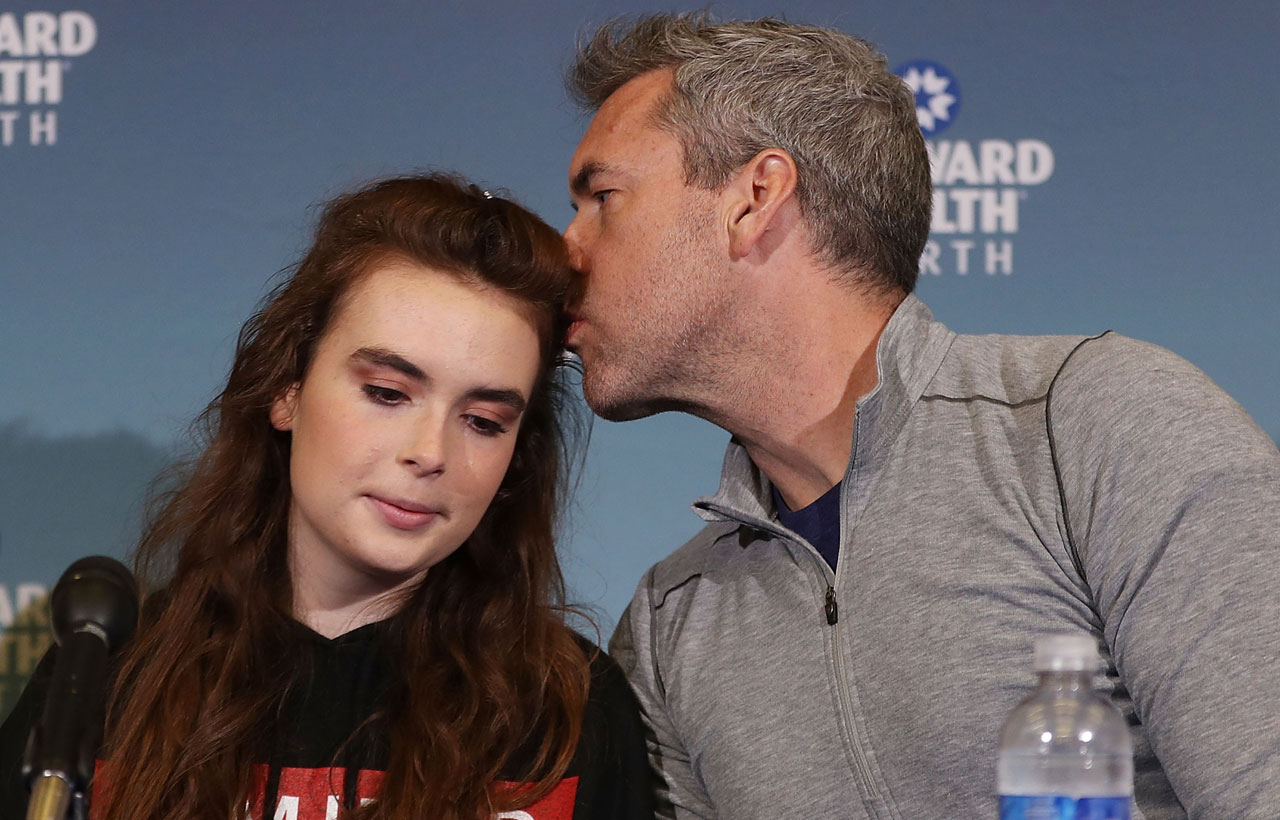 Students and alumni from Marjory Stoneman Douglas High School met with Speaker Paul Ryan at his offices in the U.S. Capitol in Washington, D.C. 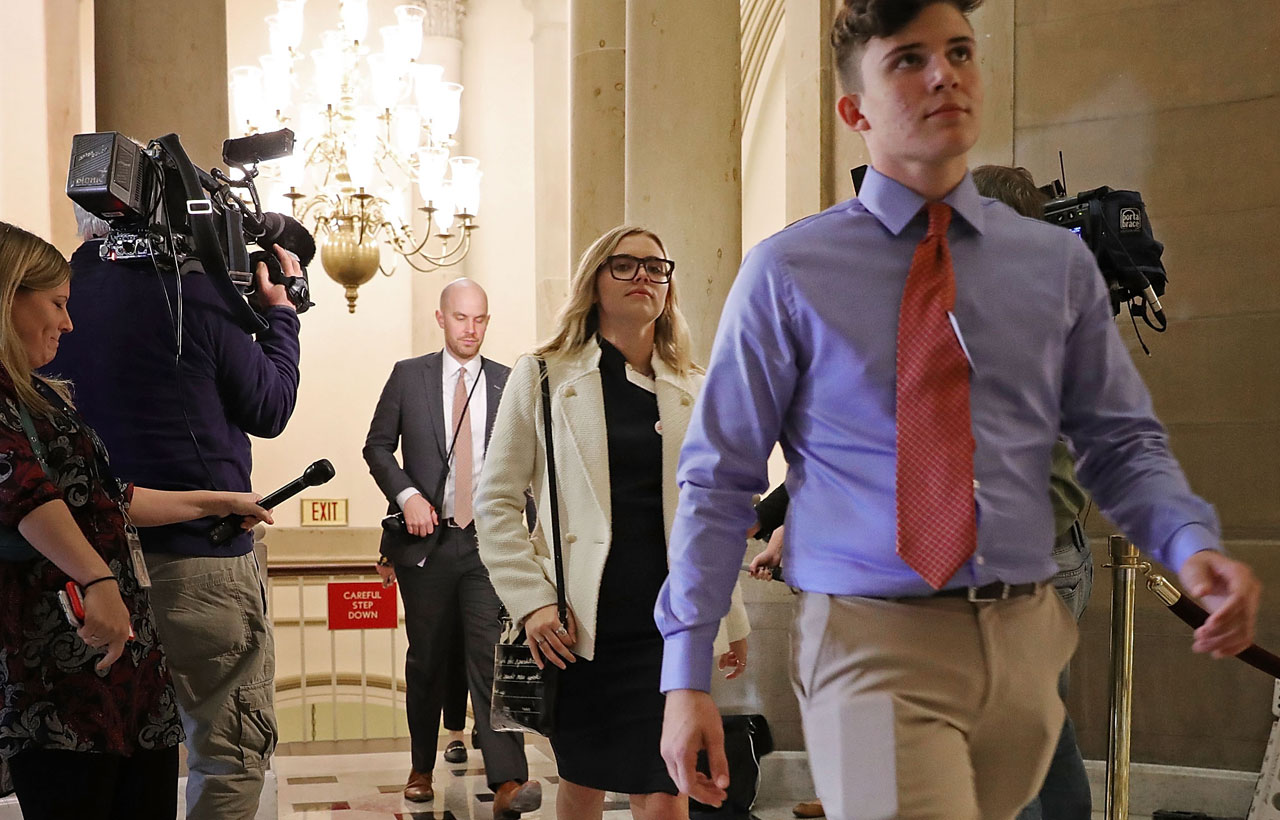 Students return to class for the first time since the Valentine's Day massacre. 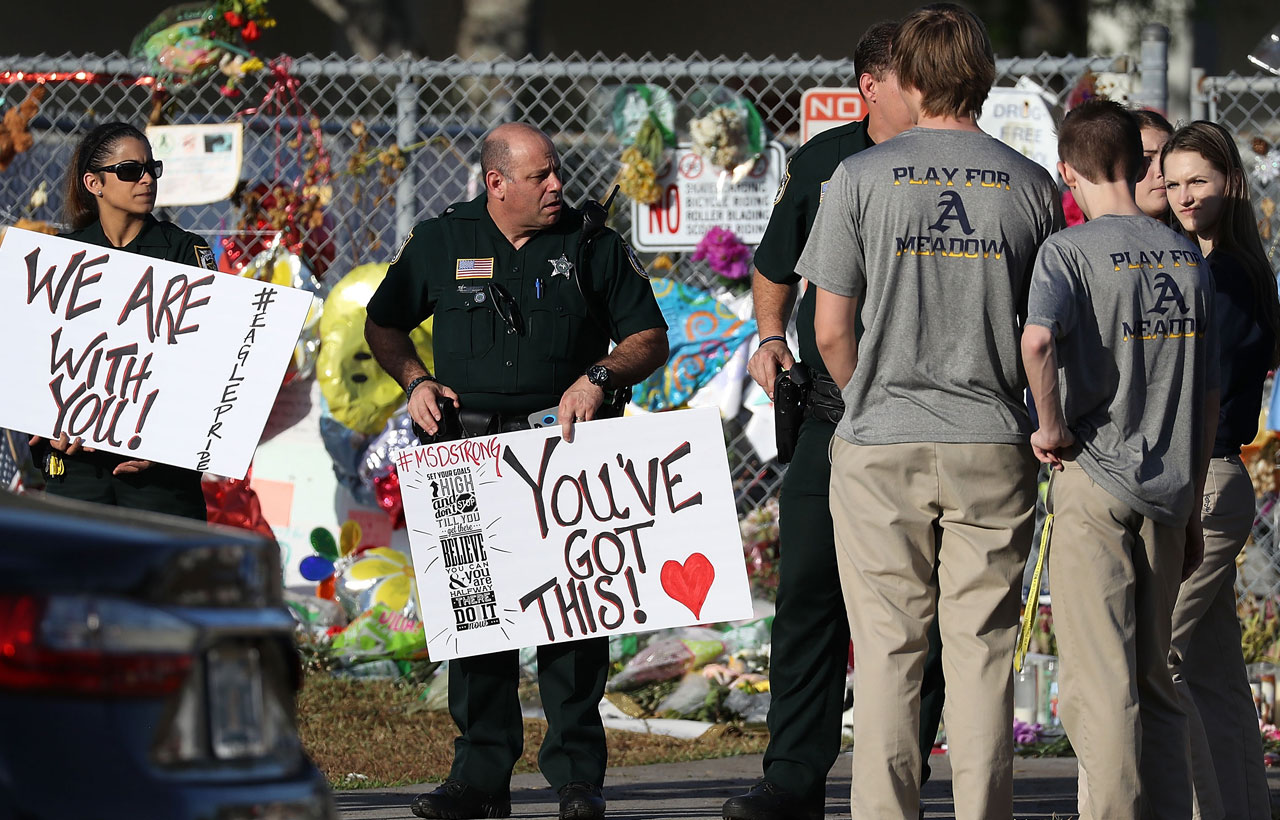 The NRA releases the "Time Is Running Out" video threatening reporters for biased reporting.

“To every lying member of the media, to every Hollywood phony, to the role model athletes who use their free speech to alter and undermine what our flag represents …Your Time is running out," NRA spokeswoman Dana Loesch said in the video.  "The clock starts now." 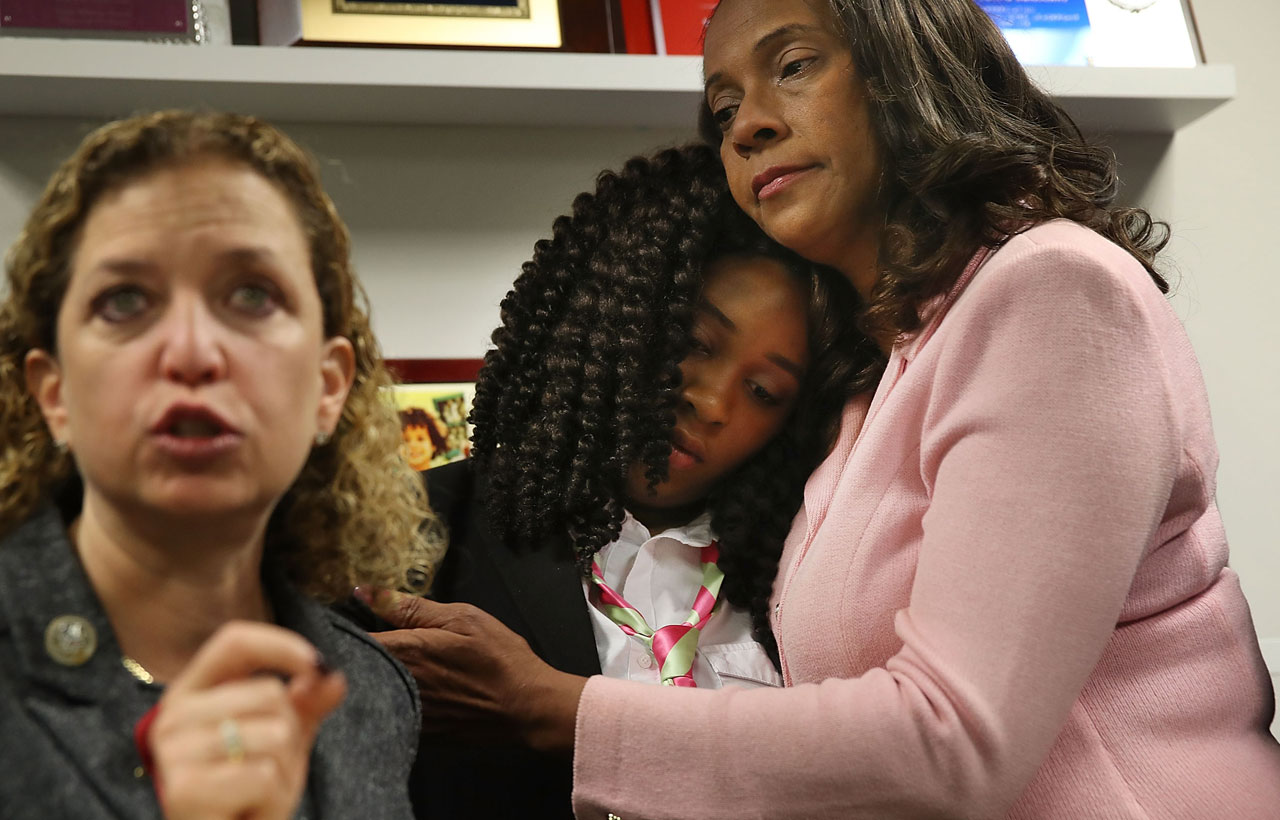 Sarah Chadwick, the student who responded to Trump's first tweet about the shooting with disdain, tweets a response spoofing the NRA spokeswoman's threatening video to promote the March for Our Lives.

"To every spokeswoman with an hourglass who uses free speech to alter and undermine what our flag represents...Your Time is running out. The clock starts now." 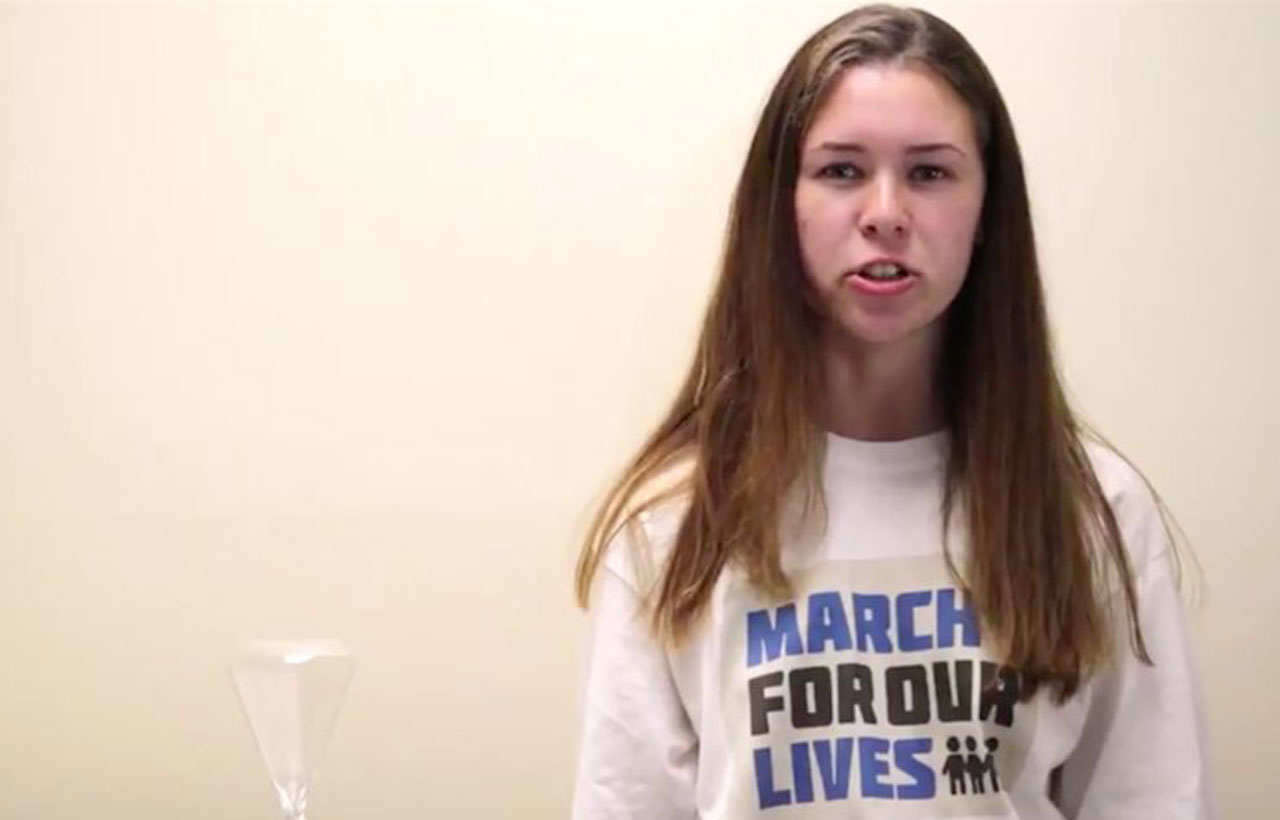 Fred Guttenberg, father of murdered Marjory Stoneman Douglas freshman Jamie Guttenberg, speaks during a meeting with U.S. Senate Democrats in the visitors center at the U.S. Capitol in Washington, D.C. He was holding an article about the NRA's threatening video. 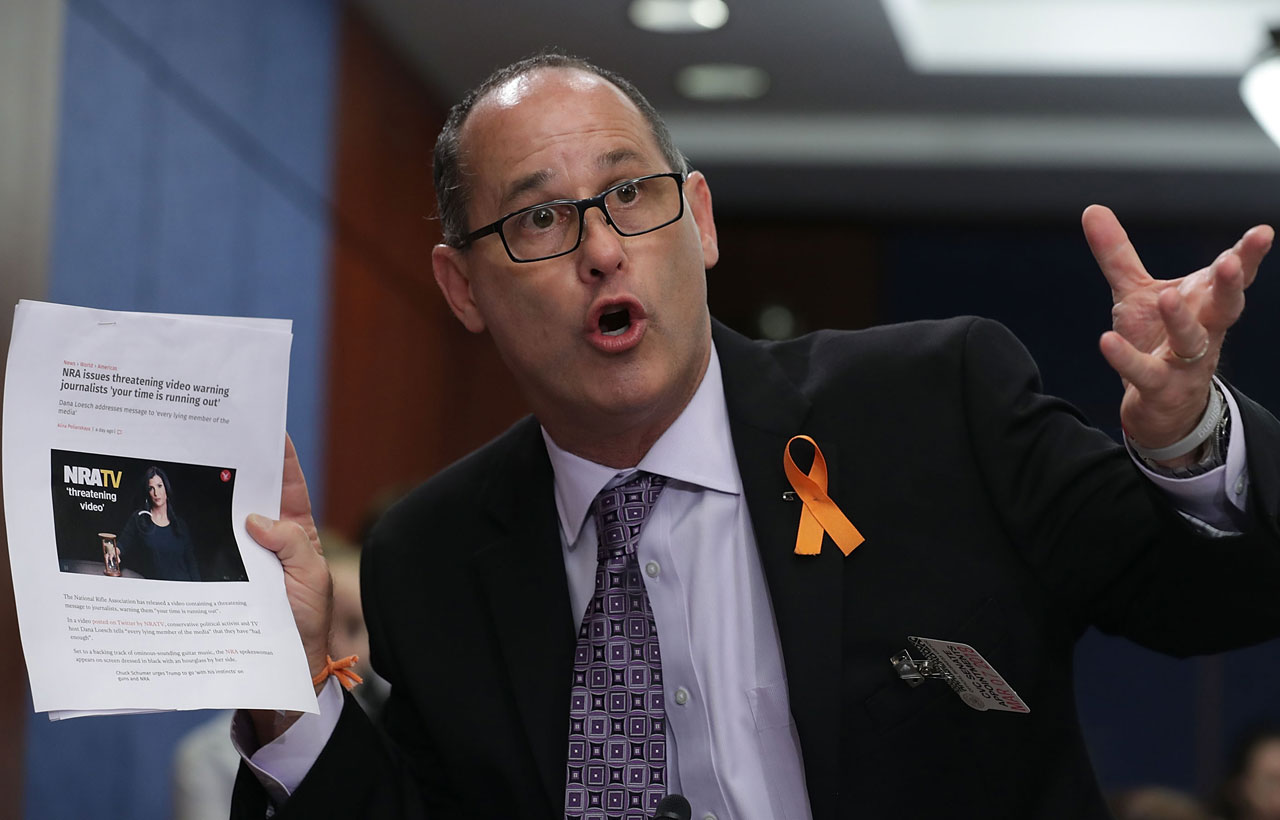 U.S. Sen. Orrin Hatch, Republican from Utah,  hugs Patrick Petty, son of Ryan Petty, who lost his 14-year-old daughter Alaina Petty during the mass shooting at Marjory Stoneman Douglas High School.  They were attending a press conference to discuss the STOP School Violence Act in front of the U.S. Capitol in Washington. 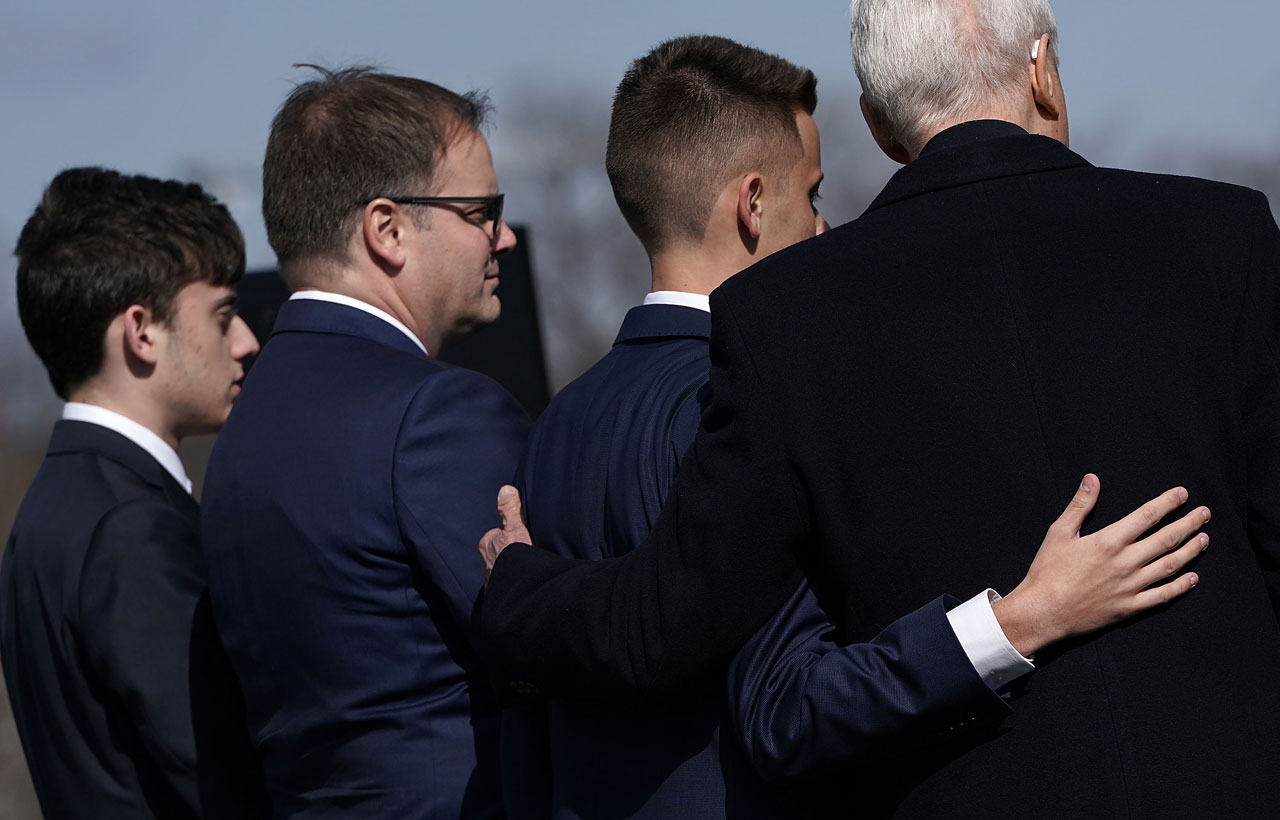 Students from all over the country walk out of class to show solidarity with Marjory Stoneman Douglas High School students' demands for gun control. 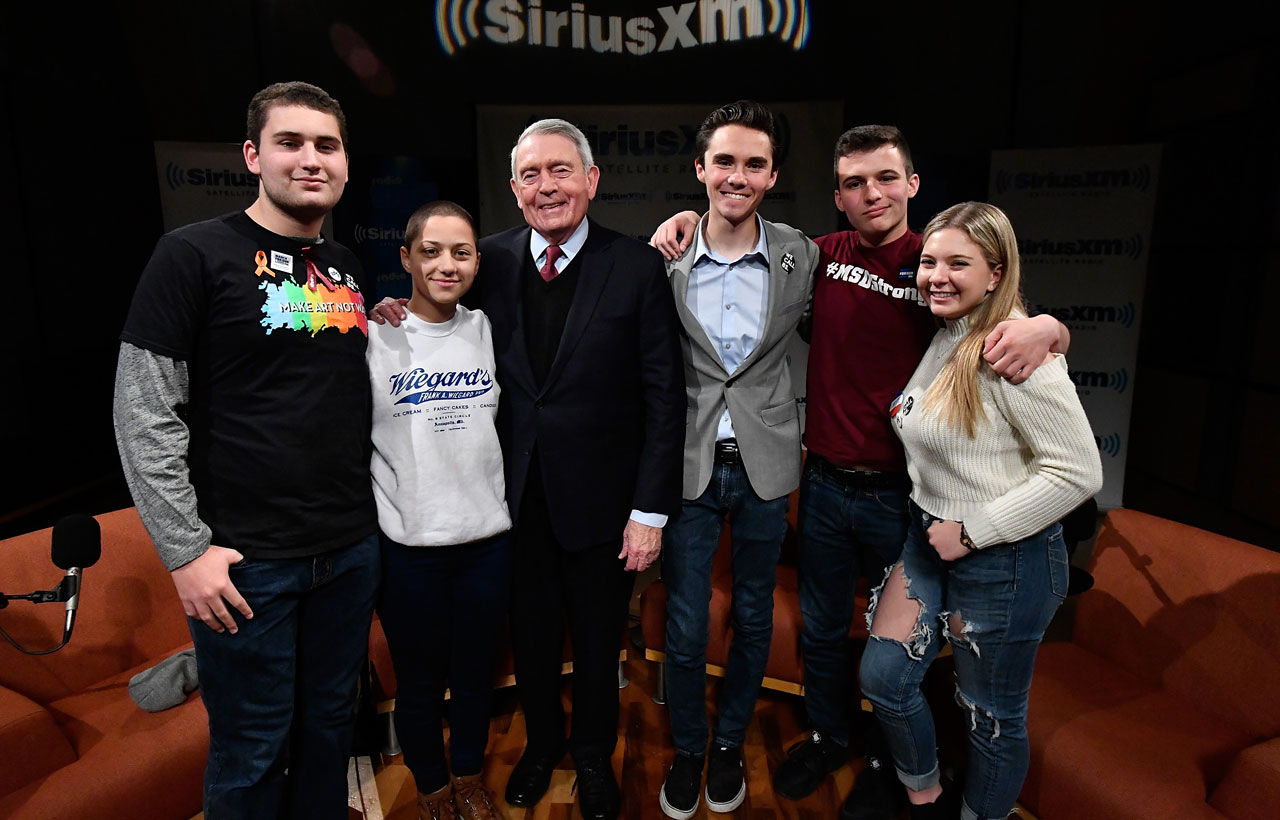