Black Lives Matter protest goes on, but not in Lauderhill

WATCH: 57 arrests in Miami Saturday night, only 13 lived in the city

5 things to know about the congressional visit to Homestead shelter

HOMESTEAD, Fla. – A group of Florida Democrats -- including Congresswoman Debbie Wasserman Schultz and Sen. Bill Nelson -- toured a shelter for migrant children in Homestead this weekend.

The Homestead Temporary Shelter for Unaccompanied Children houses about 1,200 migrant children who enter the U.S. alone and dozens of children who were separated from their parents after crossing the southern border.

Here’s what you need to know about their tour:

No timeline for when reunification will happen

The average length of a stay at the shelter is 25 days. About 85 percent of these children  will go to a parent, family member or friend in the U.S., according to the Department of Health and Human Services (HHS), which oversees the shelter. Many of the children who crossed the border by themselves came with the phone number of a U.S.-based relative memorized, so they can connect with that person once they reach the United States, Rep. Frederica Wilson said.

But for migrant children separated from their parents at the border, there is no timeline for how long they will stay at the shelter. Congressional leaders are demanding President Donald Trump's administration adopt a policy to reunite the children with their parents.

"We want to see these children get back with their parents because of the emotional and the mental toil they’re going through not being with their immediate family," Nelson said. Sen. Marco Rubio, who visited the shelter separately on Friday, added: "That's one of the things Congress needs to step up and do. If that's in fact the policy we want to pursue, then that capacity needs to be created."

The children are 'well taken care of'

Congressional leaders describe the migrant children’s lifestyle as regimented, with the young people adhering to a strict 6:30 a.m. to 10 p.m. schedule Monday through Friday. Their schedule includes classes in math, science, English, group therapy, music and a talent show. The children live in one of four dormitory buildings, which are similar to college dormitories, but there are 12 children per room.  They all sleep in bunk beds and share two sinks, one shower and one toilet per room.

Male and female students are kept separate through the day. They eat at different times and go to class in different parts of the makeshift school inside a large air-conditioned white tent. There are no video games or access to daily television. They are rewarded for good behavior with access to TV shows on the weekend, including watching the World Cup.

"They did seem happy and healthy," Rep. Wasserman Schultz said.

Most of the children separated from their parents at the border have been in touch with each other over the phone, Nelson said. But each child at the shelter is only allowed two 10-minute phone calls per week.

"I'm a mother. I have a 14-year-old who is the exact age of many of these children. I can’t imagine only being able to talk to her twice a week for 10 minutes," Wasserman Schultz said.

The children at the shelter in Homestead are all between the ages of 13 and 17, and the vast majority fled Guatemala, Honduras and El Salvador. Those three countries are part of Central America’s Northern Triangle, considered one of the most violent regions in the world.

Most kids don’t stay long, but for others, it’s a question mark

South Florida’s congressional leaders say they discovered that there is only one person at the shelter who works to reunite children split from their parents. They were hoping to ask questions during their Saturday visit, but that person only works Monday through Friday. Not having weekend staff in this area harms the children, Wasserman Schultz said.

"The instruction should come down from the White House to dedicate whatever resources are necessary to have, to ensure that there are officials at every facility where these kids are being housed to work 'round the clock and they can set about promptly, immediately, of bringing those families back together," Rep. Ted Deutch said. 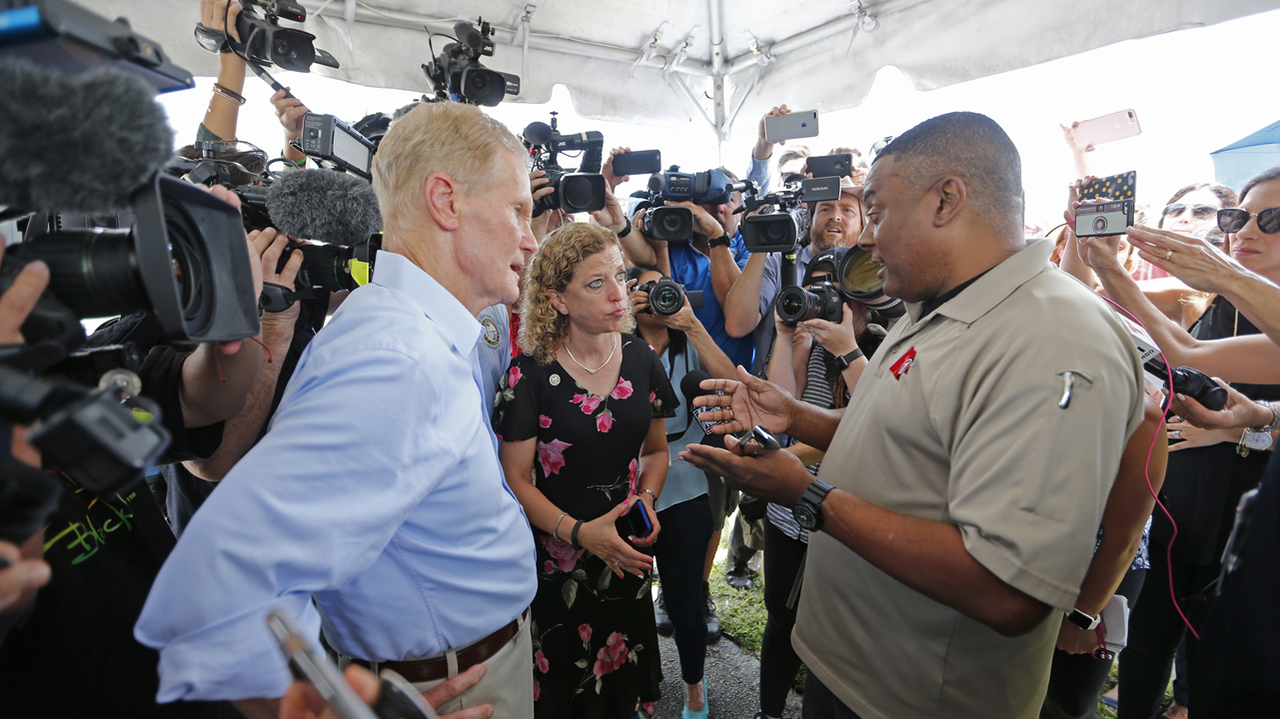 A security guard told Wasserman Schultz and Nelson they were trespassing on federal property when they showed up for a tour Tuesday. The two Democrats said they gave half a day’s notice, but were told they needed to give two weeks’ notice prior to their arrival. Wasserman Schulz said the two-week requirement doesn't allow Congress members to conduct proper oversight of the shelter. The shelter is run by Comprehensive Health Services, which has a $30 million federal contract with HHS.

"If the children here are truly being treated the way we just observed, there was no reason not to let us in on Tuesday," Wasserman Schultz said. "I’m a member of the appropriations committee, responsible for appropriating the funds, the contract for the organization that runs this facility, so much more prompt access should be allowed."