Florida reports single-day increase of 21,683 new COVID-19 cases, most since start of pandemic

Large freedom rally at Bayfront Park not only for Cuba, but also Venezuela and Nicaragua

Kavanaugh's confirmation all but sure after bitter fight

WASHINGTON – After weeks of shocking accusations, hardball politics and rowdy Capitol protests, a pair of wavering senators declared they will back Brett Kavanaugh’s Supreme Court confirmation, all but guaranteeing the deeply riven Senate will elevate the conservative jurist to the nation’s highest court on Saturday.

The announcements by Republican Susan Collins of Maine and Democrat Joe Manchin of West Virginia ended most of the suspense over a political battle that has transfixed the nation — though die-hard Democrats insisted on arguing through the night to a mostly empty Senate chamber.

Some of them continued raising concerns that Kavanaugh would push the court further to the right, including with possible sympathetic rulings for President Donald Trump, the man who nominated him. But the case against Kavanaugh had long since been taken over by allegations that he sexually abused women decades ago — accusations he emphatically denied.

In the pivotal moment Friday, Collins, perhaps the chamber’s most moderate Republican, proclaimed her support for Kavanaugh at the end of a Senate floor speech that lasted nearly 45 minutes. While she was among a handful of Republicans who helped sink Trump’s quest to obliterate President Barack Obama’s health care law last year, this time she proved instrumental in delivering a triumph to Trump.

“We will be ill-served in the long run if we abandon the presumption of innocence and fairness, tempting though it may be,” she said. “We must always remember that it is when passions are most inflamed that fairness is most in jeopardy.”

Those passions were on full display this week in a fight that could energize both parties’ voters in elections for control of Congress just five weeks away. The showdown drew raucous demonstrators — largely anti-Kavanaugh — to the Capitol, where they raised tensions by repeatedly confronting lawmakers despite an intensified police presence. Another 101 protesters were arrested Friday, the U.S. Capitol Police said.

It’s all expected to conclude Saturday afternoon with a final roll call almost solidly along party lines. That would mark an anti-climactic finale to a clash fought against the backdrop of the #MeToo movement and Trump’s unyielding support of the nominee, opposing forces that left Kavanaugh’s fate in doubt for weeks.

Manchin, the only remaining undeclared lawmaker, used an emailed statement to announce his support for Kavanaugh moments after Collins finished talking, making him the only Democrat supporting the nominee. Manchin faces a competitive re-election race next month in a state Trump carried in 2016 by 42 percentage points.

“My heart goes out to anyone who has experienced any type of sexual assault in their life,” Manchin said. But he added that based on the FBI report, “I have found Judge Kavanaugh to be a qualified jurist who will follow the Constitution and determine cases based on the legal findings before him.”

Protesters chanted “Shame” at Manchin later when he talked to reporters outside his office.

Republicans control the Senate by a meager 51-49 margin. Support from Collins and Manchin would give Kavanaugh at least 51 votes.

Three female GOP senators — Jodi Ernst of Iowa, Shelley Moore Capito of West Virginia and Cindy Hyde-Smith of Mississippi, sat directly behind Collins as she spoke. Majority Leader Mitch McConnell of Kentucky sat directly in front of Collins and pivoted his seat around to face her. A few Democrats sat stone-faced nearby.

Republican Lisa Murkowski of Alaska, a fellow moderate and friend of Collins, became the only Republican to say she opposed Kavanaugh. She said on the Senate floor Friday evening that Kavanaugh is “a good man” but his “appearance of impropriety has become unavoidable.”

She added that with Supreme Court appointments lasting a lifetime, “Those who seek these seats must meet the highest standards in all respects, at all times. And that is hard.”

In a twist, Murkowski said she will state her opposition but vote “present” as a courtesy to Kavanaugh supporter Sen. Steve Daines, R-Mont., who is attending his daughter’s wedding in Montana. Murkowski said she’d use an obscure procedure that lets one senator offset the absence of another without affecting the outcome. That would let Kavanaugh win by the same two-vote margin he’d have received had both senators voted.

Sen. Jeff Flake, R-Ariz., who has repeatedly battled Trump and will retire in January, said he’d vote for Kavanaugh’s confirmation “unless something big changes.”

Vice President Mike Pence planned to be available Saturday in case his tie-breaking vote was needed, which now seems unlikely.

In a procedural vote that handed Republicans an initial victory, senators voted 51-49 Friday to limit debate and keep the nomination alive, defeating Democratic efforts to scuttle it with endless delays.

The debate sparked smoldering resentment by partisans on both sides, on and off the Senate floor.

“What left wing groups and their Democratic allies have done to Judge Kavanaugh is nothing short of monstrous,” Republican Judiciary Committee Chairman Chuck Grassley of Iowa declared before the vote. He accused Democrats of emboldening protesters: “They have encouraged mob rule.”

On the other side, Senate Democratic leader Chuck Schumer of New York called the fight “a sorry epilogue to the brazen theft of Justice Scalia’s seat.” That reflected Democrats’ lasting umbrage over Republicans’ 2016 refusal to even consider Merrick Garland, President Obama’s nominee to replace the late Antonin Scalia.

When Trump nominated Kavanaugh in July, Democrats leapt to oppose him, saying that past statements and opinions showed he’d be a threat to the Roe v. Wade case that assured the right to abortion. They said he also seemed ready to rule for Trump if federal authorities probing his 2016 campaign’s alleged connections to Russia try to pursue him in court.

Yet Kavanaugh’s pathway to confirmation seemed unfettered until Ford accused him of drunkenly sexually assaulting her in a locked bedroom at a 1982 high school gathering. Two other women later emerged with sexual misconduct allegations from the 1980s.

Kavanaugh foes cast him as a product of a hard-drinking, male-dominated, private school culture in Washington’s upscale Maryland suburb of Bethesda. He and his defenders asserted that his high school and college focus was on academics, sports and church.

Democrats also challenged Kavanaugh’s honesty, temperament and ability to be nonpartisan after he fumed at last week’s Judiciary hearing that Democrats had launched a “search and destroy mission” against him fueled by their hatred of Trump.

Kavanaugh would replace the retired Justice Anthony Kennedy, who was a swing vote on issues including abortion, campaign finance and same-sex marriage. 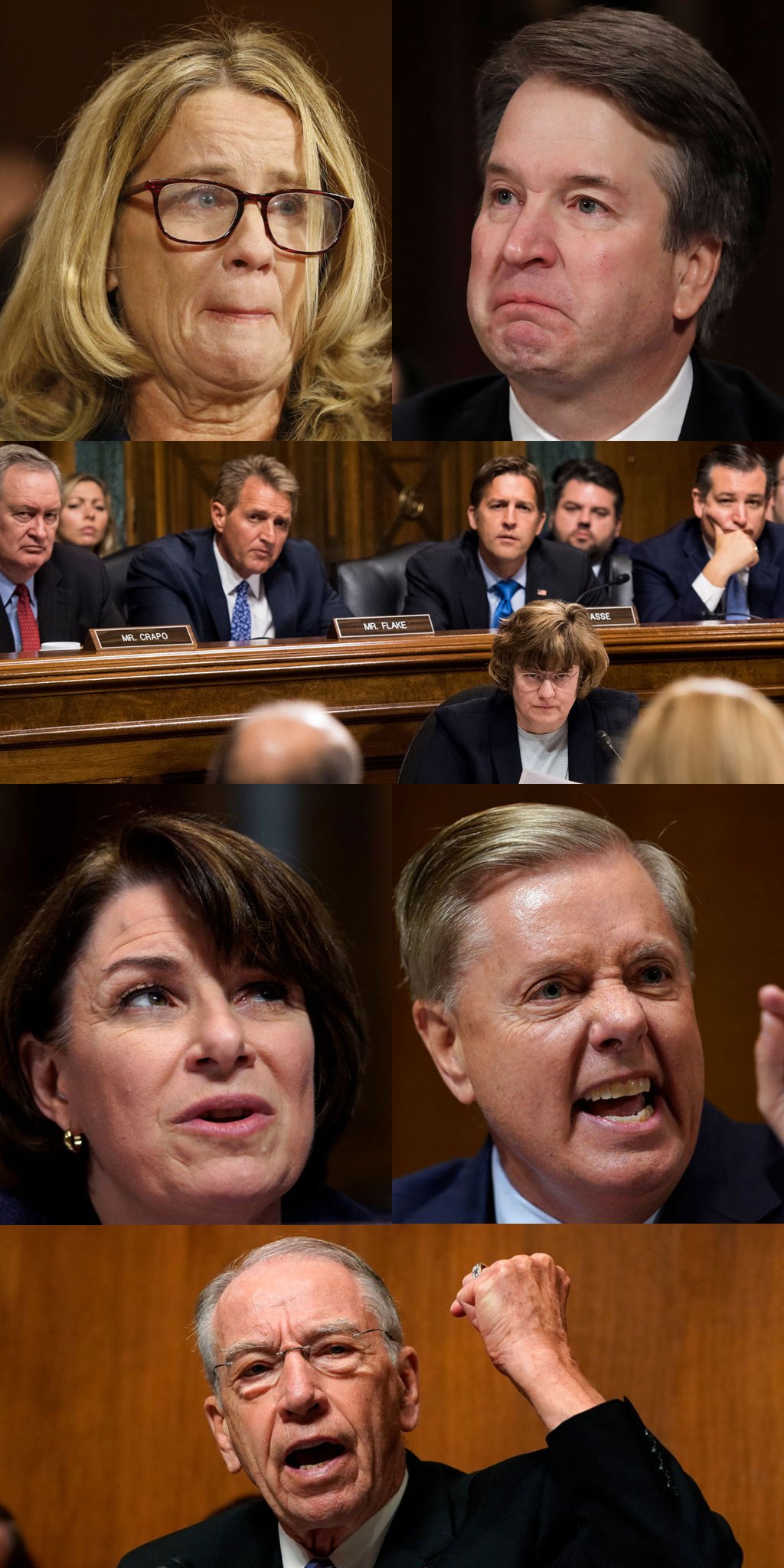