Guaido back in Venezuela to challenge Maduro

Guaido gets rock-star welcome in Caracas

CARACAS, Venezuela – Declaring he knows he is at risk, Venezuelan opposition leader Juan Guaido returned Monday to his homeland to renew his campaign to topple the government of President Nicolas Maduro.

Guaido landed at the country's main airport, about 25 miles from Caracas, the capital. He said in a tweet that he successfully passed through immigration checks.

"We know the risks that we face, that's never stopped us," the 35-year-old leader of Venezuela's National Assembly said as he moved through a crowd that included several Western ambassadors. The United States and about 50 other countries have recognized Guaido as Venezuela's legitimate leader, arguing that last year's re-election of Maduro was illegitimate because popular opposition candidates were barred from running.

Opposition lawmakers announce that Juan Guaido “is in Venezuelan territory” and successfully passed through immigration at the Caracas airport. Now we wait for him to arrive at this concentration. It’s his first trip back after leaving the country on Jan. 22. pic.twitter.com/6C2pVfMmtK

"The regime must understand, the dictatorship must understand... that we're stronger than ever. We'll continue protesting, we'll continue mobilizing," said Guaido, who had ignored an official ban on foreign travel to leave Venezuela, first for Colombia and then elsewhere in Latin America.

Guaido has called for nationwide demonstrations coinciding with his arrival. Thousands of supporters heeded the call, peacefully gathering at a Caracas plaza and in other locations around the country. Some people carried national flags. 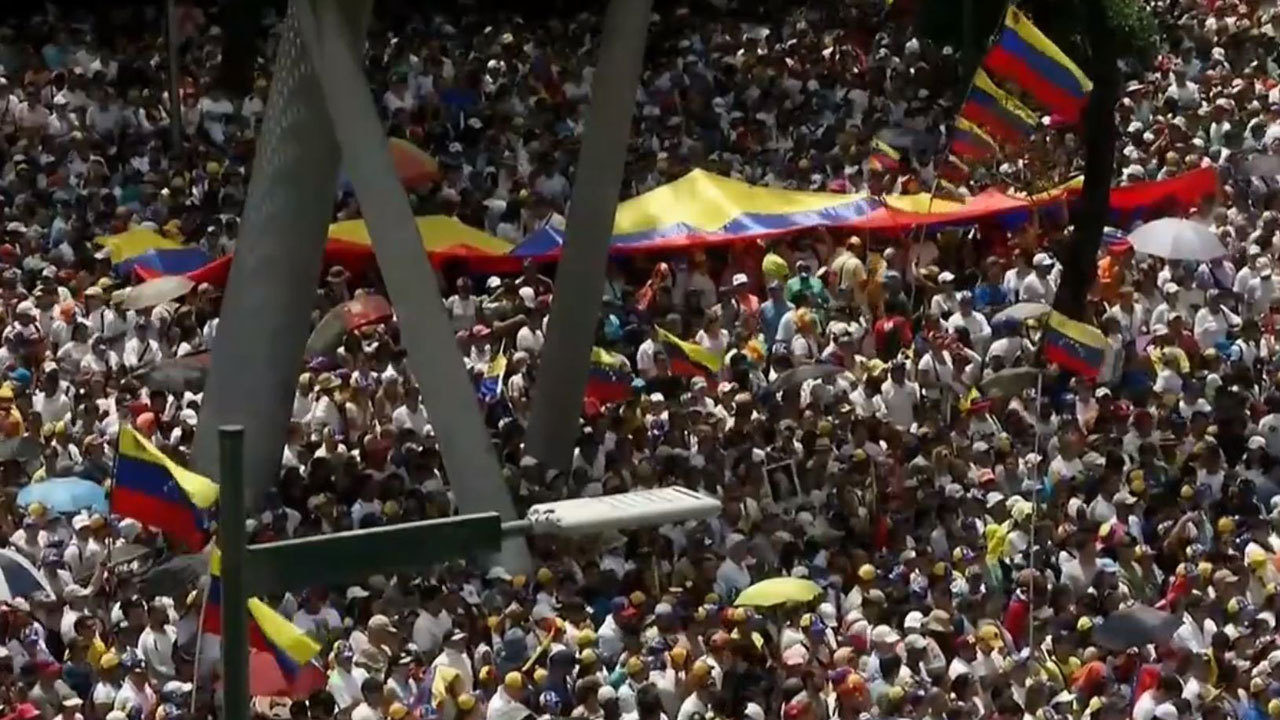 Guaido, who has declared himself interim president of Venezuela, said the goal of his return is to intensify internal pressure on Maduro. Besides Colombia, Guaido visited Brazil, Argentina and Ecuador over the past week. All are countries that support his campaign against Maduro.

U.S. National Security Adviser John Bolton tweeted that threats or action by Maduro's government against Guaido "will be met with a strong and significant response from the United States and the international community."

Maduro has said he is the target of a U.S.-backed coup plot after the Trump administration joined dozens of other countries in recognizing Guaido as the rightful president of a nation in the midst of a political and humanitarian crisis.

Venezuela's vice president, Delcy Rodriguez, did not directly address a question about whether Guaido faces arrest during a recent interview with Russian state-owned TV channel RT. But she left open the possibility, saying Guaido had broken the law and is "a Venezuelan who conspires with foreign governments to overthrow a constitutional government."

Maduro, meanwhile, has urged Venezuelans to enjoy the carnival season slated for Monday and Tuesday, even though many people don't have the resources to travel to beaches and other holiday spots.

Maduro on Sunday tweeted that Venezuelans nationwide are enjoying the carnival "in peace and happiness."

Well.. @jguaido made it. He’s in #Vargas, with his people.

Juan Guaido arriving at the airport in Caracas, where he has been threatened with arrest pic.twitter.com/2hWis8YchL

Hundreds waited for Juan Guaido at the Maiquetia airport including several ambassadors.

Juan Guaido has passed migration control at the airport, and said to be on his way to the protests.