Why does Runcie walk away with so much Broward taxpayer money?

FORT LAUDERDALE, Fla. – A state grand jury released a report on Friday recommending that Gov. Ron DeSantis remove four sitting Broward County Public Schools board members and reported there is a need for “housecleaning” of the school district’s administration.

“School board members are elected by the people and to say that they should be removed could be someone’s opinion,” Osgood said. “That is another portion of the grand jury report that I don’t agree with.”

DeSantis petitioned the Florida Supreme Court to impanel a statewide grand jury in 2019 to investigate the 2018 Valentine’s Day massacre at Marjory Stoneman Douglas High School in Parkland. Lori Alhadeff, a school board member and the mother of one of the 17 victims, released a statement saying the grand jury’s findings were distressing.

“Its findings of the many failures in our state’s schools are unacceptable, as are the numerous and well-documented instances of corruption, fraud, mismanagement, and incompetence it has revealed here in Broward County. Those who have been named in the report for wrongdoing must be held accountable,” Alhadeff wrote.

The grand jury also accused Murray, Korn, Levinson, Good, and Osgood of having a “fanatical desire to control data” to use it “to manipulate public perception.” Most of the accusations are related to a $1 billion school safety program that voters approved in 2014.

The grand jury reported there were delays and an almost 50% increase in cost due to a “slow-boiling frog that resulted from years of mismanagement” and a refusal to hold “leadership to account.”

The grand jury accused former Broward Schools Superintendent Robert Runcie of just failing the district: “Bluntly put, the lip service paid by Runcie and the Board to ‘safety concerns’ appears as Shakespeare noted in Macbeth, to be ‘full of sound and fury, signifying nothing.’”

Last year, the grand jury indicted Runcie on a perjury charge and he pleaded not guilty. He left the job with about $754,900 after a mutual separation agreement approved by the school board.

The grand jury also reported that requesting public records from the school district during the investigation was like dealing with “a suspected pyramid scheme” and alleged that when “sophistry, sowing conflict, and stonewalling” didn’t work sometimes district officials just lied.

“Runcie lied about important issues. In the wake of the MSD shooting, he lied to the public when he said the MSD shooter had never been involved with the PROMISE Program. He then lied to a State Senator when he told her there was a “Code Red” called at MSD at the time of the shooting,” the grand jury wrote.

Good released a statement in response to the accusations on Friday night that brought back memories of the board’s decision to mandate face masks in schools during a period of the pandemic — despite DeSantis’s opposition.

“It’s unfortunate that this grand jury process has been weaponized and politicized in such a way to retaliate against Board Members who disagreed with the Governor’s views,” Good wrote. “We, as a Board, have always served with courage, credibility and compassion for our students, teachers and staff.”

“My heart goes out to the MSD families and the grief that they have, but I am appalled that they have been used as political pawns of the governor to come after Broward Democrats,” Rich Levinson said.

The grand jury’s fourth report was finished last year, but it was released just as Korn was campaigning for reelection.

“Given the secrecy of grand jury proceedings, I have no information regarding what the grand jury heard, and I have not been permitted to review transcripts. I look forward to reviewing that information and reassuring our community that I have always placed our students first,” Korn said in a statement.

Voters who did not mail in their ballots will turnout on Tuesday. The terms for Murray, Levinson, and Good end in November. DeSantis removed former Broward Sheriff Scott Israel from office in 2019 after reported BSO failures during the response in Parkland.

The grand jury warned the district is running out of money to support The SMART program’s projects and was forced to empty capital reserves by issuing a series of mortgages on its own real estate properties, which must be paid back with interest over the next 14 years.

The school board was on notice that costs were on their way up, and the scope of work promised at $937 million was now likely going to cost at least $1.171 billion — before the actual projected cost increased to $1.462 billion, according to the grand jury.

“The Board cannot continue to give the District a blank check to incompetently manage these SMART program projects. It has to end,” the grand jury wrote.

Alhadeff brought a motion to terminate Runcie for cause on March 5, 2019, alleging he had failed to properly manage the program. 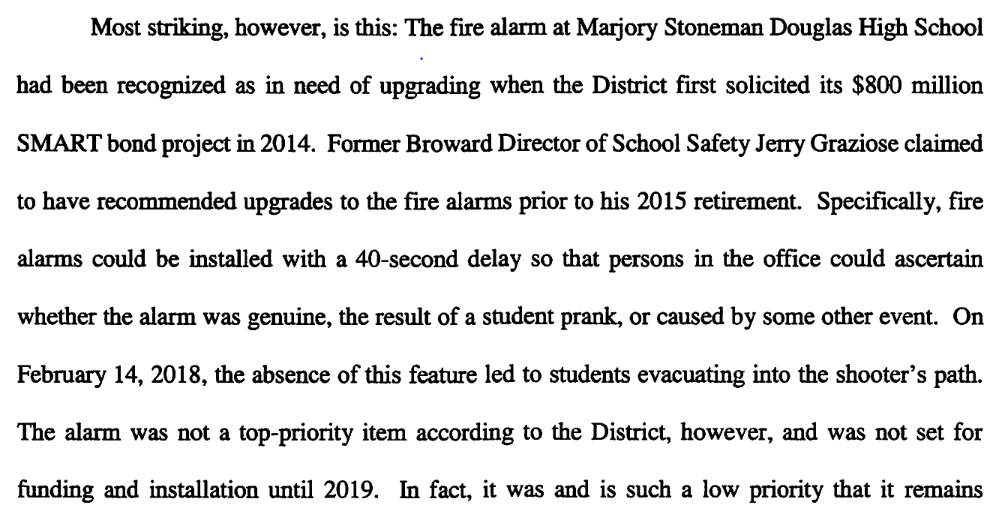 The Parkland school shooter used an AR-15 to fire in and out of classrooms on Feb. 14, 2018, at the school’s 1200 building. One of the examples that the grand jury cited was related to the chaos on the third floor.

The Marjory Stoneman Douglas High School Public Safety Commission found the percussion of the gunshots caused the fire alarm to activate and teachers evacuated their classrooms. This, the grand jury wrote, “led to students evacuating into the shooter’s path.”

The need to upgrade the fire alarm was identified as a “top-priority item” in The SMART bond project in 2014, according to the grand jury.

“While we do not have any evidence to outright declare that the combination of inaccurate data reporting, antipathy toward law enforcement, facile falsehoods by administration officials, or the astonishing mismanagement of SMART safety projects led directly to the MSD tragedy, neither can we say they played no role in creating the darkness in which this malignancy grew,” the grand jury wrote. “It is readily apparent that the toxic combination of these factors has, and continues to, put Broward County students at risk.”

There is urgency. The list of schools with mold and mildew problems while waiting for new roofs through the SMART program includes Quiet Waters, Sheridan Park, Palmview, North Fork, Royal Palm, and Stephen Foster elementary schools, according to the grand jury.

This is a developing story. Local 10 News Anchor Kristi Krueger contributed to this report.

Why does Runcie walk away with so much Broward taxpayer money?

Superintendent Robert Runcie's mutual separation agreement with the Broward School Board comes rather than a dismissal for cause in part because it’s not yet known if Runcie will be convicted of the perjury charge he faces.

The Broward County School Board voted Tuesday to approve the mutual separation agreement for Superintendent Robert Runcie that was agreed upon a day prior between Runcie’s attorney and board Chair Dr. Rosalind Osgood.

Robert Runcie is seeking for his perjury charge to be thrown out, with an attorney for the outgoing Broward County Public Schools superintendent arguing in court Wednesday that prosecutors haven’t specified what he is accused of lying about to a grand jury.