In the city of Miami, could working from home be breaking the law?

Do you have A- or AB- blood type? Teenage girl needs your help

Poor weather from Tropical Storm Nestor spreading across Southeast US

Tropical Storm Nestor will track across the southeast today. The bad weather is already spreading across much of Florida, southeast Georgia, and into the Carolinas. The higher winds will reach the Carolinas tomorrow. Gusty rain squalls and some tornadoes are expected.

Nestor is transitioning into a northern winter-type storm. It is shaped now more like a comma than a donut. As is typical with that type of system, the worst weather is well east of the center. This is a situation where looking at the cone is especially misleading, because almost all of the bad weather is to the right side by a long distance.

The most dangerous storm surge will occur east of Apalachicola around the coast to Tampa Bay. In addition, the strongest thunderstorms with the possibility of tornadoes are over the peninsula, far from where the center of circulation will track. Do not pay any attention to the cone with this storm. Be aware of the weather in your area anywhere on the Florida peninsula.

The dip in the jet stream that kick-started Nestor has caught up with it. Now it is creating a hostile environment over the storm, so the weakening process can begin. In two or three days, the storm is forecast to dissipate as the remnants move out into the Atlantic. 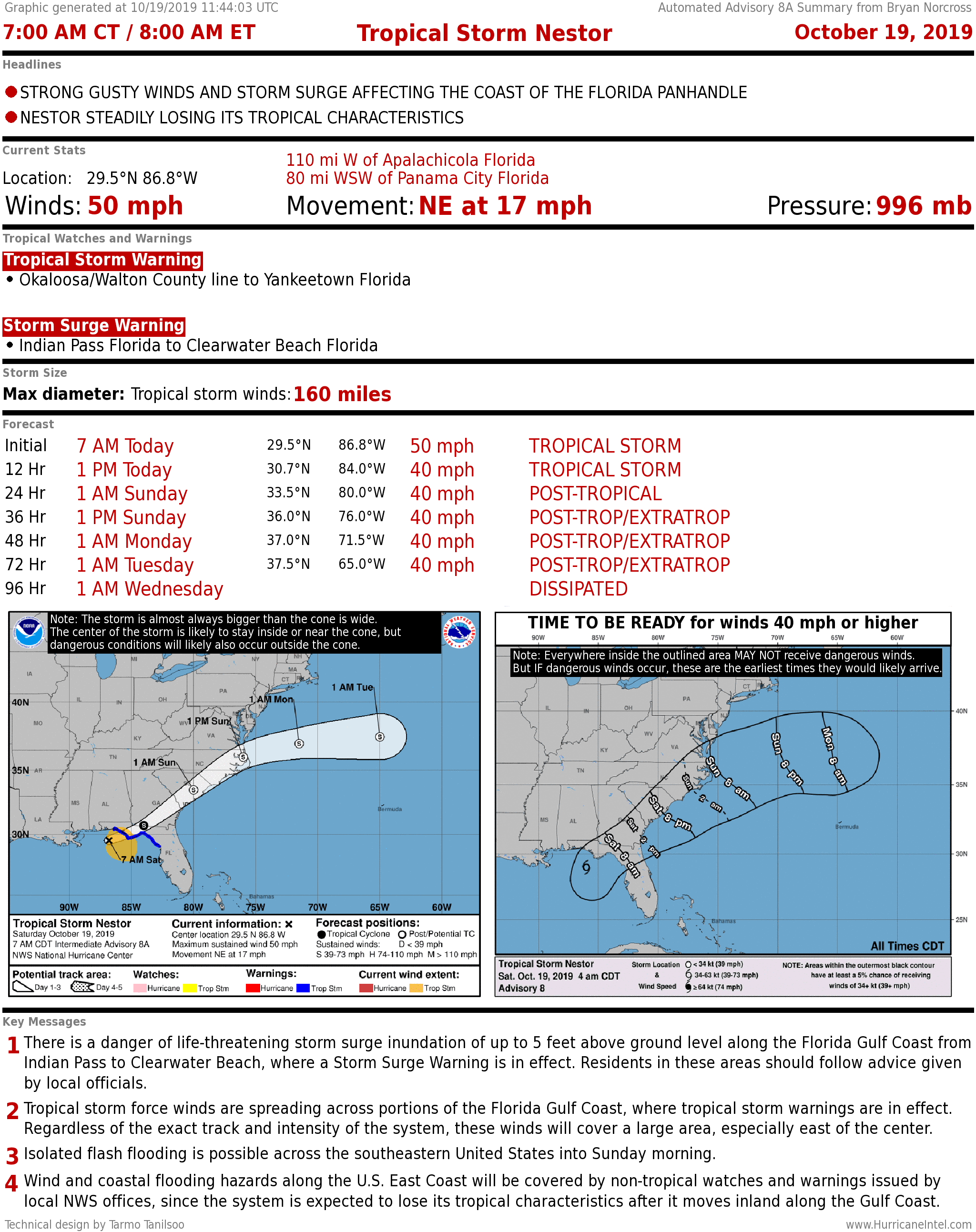 The outer edge of Nestor will be very close to South Florida today. In the outer band, strong, gusty thunderstorms are possible. They appear more likely in Palm Beach County than farther south, but we can't rule them out even in the Keys. In any case, it will be quite warm and humid as Nestor pulls deep tropical air over the region.

Here are the Key Messages from the National Hurricane Center on Nestor:

1. There is a danger of life-threatening storm surge inundation of up to 5 feet above ground level along the Florida Gulf Coast from Indian Pass to Clearwater Beach, where a storm surge warning is in effect. Residents in these areas should follow advice given by local officials.

2. Tropical storm-force winds are spreading across portions of the Florida Gulf Coast, where tropical storm warnings are in effect. Regardless of the exact track and intensity of the system, these winds will cover a large area, especially east of the center.

3. Isolated flash flooding is possible across the southeastern United States into Sunday morning.

Sometimes a tropical system can propel a cold front through South Florida on its back side – as happened after Hurricane Wilma. But it does not appear that that will happen this time. It looks like the front will stall near Lake Okeechobee and move back north.