LONDON – Meghan Markle will have an heir to the British throne walk her down the aisle — and have her mother and friends on hand for support — when she marries Prince Harry at Windsor Castle.

Friday’s announcement that Markle has asked her future father-in-law Prince Charles to offer a supporting elbow, stepping in for Markle’s father after he became ill, meant arrangements were almost complete for Saturday’s royal wedding.

The event’s mix of royalty, celebrity, pomp and ceremony has drawn stratospheric levels of interest around the world and will be broadcast live to tens of millions.

Kensington Palace said Prince Charles “is pleased to be able to welcome Ms. Markle to the royal family in this way” after Markle’s father Thomas was unable to attend due to illness.

Thousands of well-wishers descended Friday on Windsor amid final preparations for the wedding, which has drawn royal fans and an international media throng to the castle town and royal residence 25 miles (40 kilometers) west of London.

Union Jacks have been unfurled, security barriers and police patrols put into place and fans were already camping out to capture the prime viewing positions for Saturday’s royal carriage ride through the town.

Harry and Prince William, his brother and best-man, delighted royal fans when they emerged from Windsor Castle late Friday afternoon to greet well-wishers.

If Harry was feeling nervous, he didn’t show it. The smiling prince gave a thumb’s up and answered “Great, thank you” when asked how he was feeling on the eve of his wedding. The 33-year-old prince accepted a teddy bear from one well-wisher as he chatted to people from Britain, the United States, Canada and elsewhere.

Tens of thousands of spectators, including many Americans who have come in support of the California-born Markle, are expected in Windsor to soak up the royal atmosphere. British police say they will be subject to airport-style security scanners and bag searches. Metal barriers have also been erected to stop vehicle attacks like the ones that killed several people on London and Westminster bridges last year.

Sniffer dogs and mounted patrols are also out and about, and well-wishers have been asked not to throw confetti when the newlyweds ride through town in a horse-drawn carriage Saturday.

“It poses a potential security risk and it’s a bit of a pain to clean up!” said Thames Valley Police.

Buckingham Palace also announced that Queen Elizabeth II’s husband the Duke of Edinburgh will attend the royal wedding, just a few weeks after undergoing a hip replacement operation. Harry’s 96-year-old grandfather has largely retired from public duties and it had not been clear earlier whether he would be well enough to attend.

Markle’s mother, Doria Ragland, flew to England from her California home earlier in the week and had tea Friday with the queen at Windsor Castle. It was her first meeting with a head of state within whom she’s about to share a family bond.

On Thursday, Ragland dined with William’s family and a day earlier she met Charles and his wife Camilla.

Ragland had been was the bookies’ favorite to escort the bride down the aisle, but Charles has a lifetime of experience in appearing at large-scale public events amid intense scrutiny.

“I think some people will be disappointed — people who were looking forward to the historic moment of a woman walking her daughter down the aisle, and a woman of mixed race heritage from America. It would have made an historic shot,” said royal historian Robert Lacey.

But, he added, “for Prince Charles, the future king, to walk a bride down the aisle, what more could Meghan dream of?”

Archbishop of Canterbury Justin Welby, who will conduct the wedding ceremony, said Charles is “a very warm person and that he’s doing this is a sign of his love and concern and support. And I think it’s wonderful. It’s beautiful.”

The archbishop also said Harry and Markle are “a very self-possessed couple” and the atmosphere in rehearsals has been “relaxed, laughing and enjoyable.”

Roseline Morris, 35-year-old fan from Basildon, England, noted that Charles hasn’t got a daughter himself.

“He’s never going to get the chance to walk a daughter down the aisle, so this will be nice for him as well,” she said.

Having the father of the groom escort the bride is yet another twist in a royal wedding that is proving to be different from many others.

Master baker Claire Ptak said Friday that the royal wedding cake — a three-part layered lemon and elderflower cake — will have an “ethereal” taste and be presented in a non-traditional way.

Markle will not have a maid of honor but there will be 10 young bridesmaids and page boys, including 4-year-old Prince George and 3-year-old Princess Charlotte, the elder children of William and his wife Kate.

The 600 invited guests include members of the royal family and celebrity friends of Harry and Meghan’s including, it’s rumored, Elton John. Also invited are several of Markle’s co-stars from the legal TV drama “Suits.”

The couple will be married by Welby in a Church of England ceremony, but the Most Rev. Michael Curry, the first black presiding bishop of the U.S. Episcopal Church, will also deliver a sermon.

Curry — the son of an American civil rights activist and the descendant of African slaves — has spoken out for gay rights and plans to join a march on the White House next week to reject U.S. President Donald Trump’s “America first” stance.

On Friday, Curry said seeing the couple up close, he saw “two real people who are obviously in love.”

“When I see them, something in my heart leaps,” he said. “That’s why 2 billion people are watching them.” 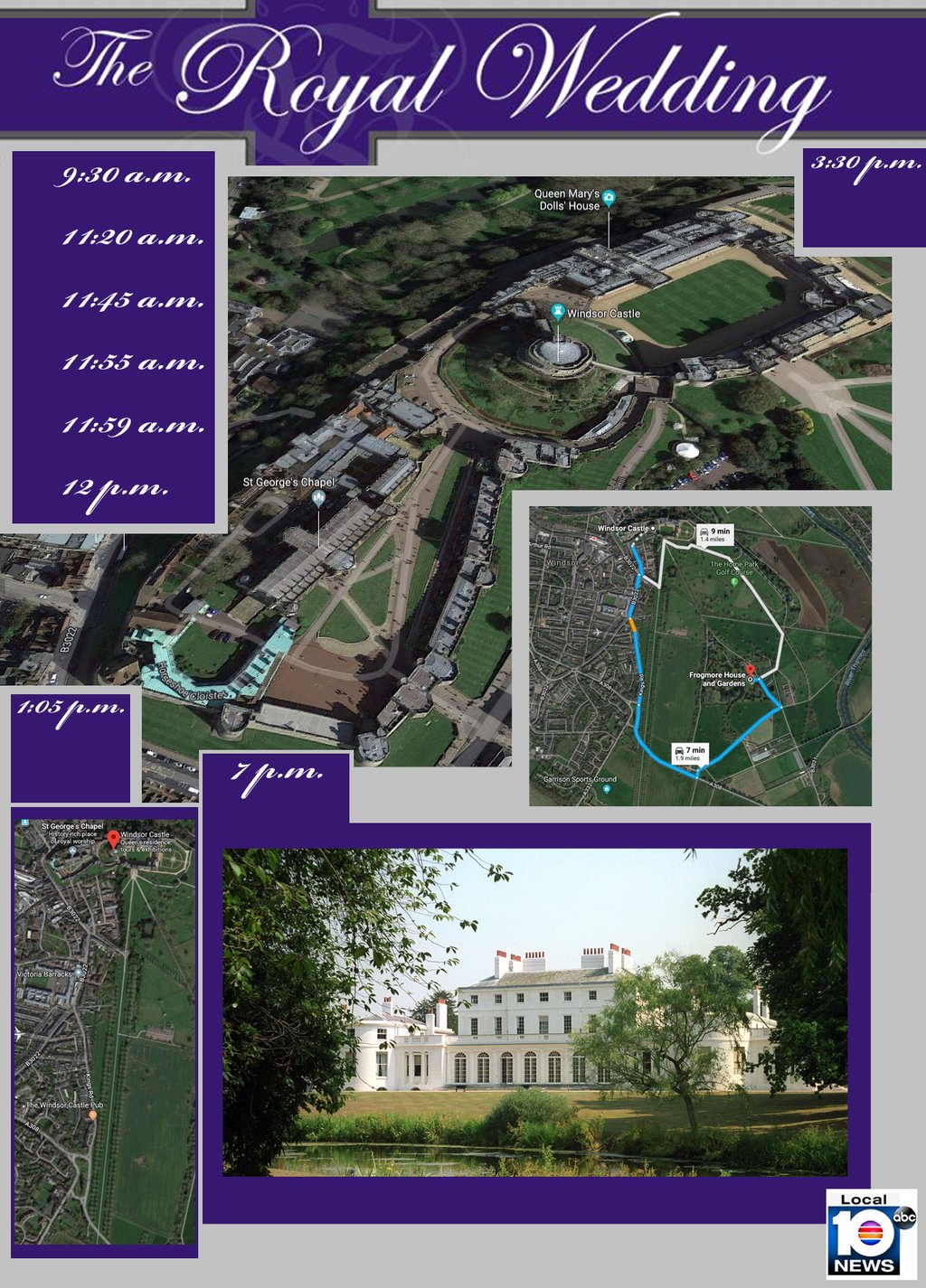