Thousands gather in Louisville to say goodbye to Muhammad Ali

LOUISVILLE, Ky. – Muhammad Ali made his final journey through his hometown Friday -- past the little pink house where he grew up and the museum that bears his name -- as thousands of mourners along the route pumped their fists and chanted, "Ali! Ali!" for the former heavyweight champion of the world.

His cherry-red casket, draped in an Islamic tapestry, was loaded into a hearse as a group of pallbearers that included former boxers Mike Tyson and Lennox Lewis and actor Will Smith left the funeral home in a double file. Ali's nine children, his wife, two of his ex-wives and other family members joined the funeral procession.

As the interfaith service got underway at the KFC Yum! Center, the crowd of up to 15,000 burst into applause and chanted, "Ali! Ali!" when a Muslim religious leader welcomed the audience to "the home of the people's champ."

The 17-car motorcade set out for a Louisville cemetery on a 19-mile route via Muhammad Ali Boulevard that was also expected to take Ali's body past the gym where he learned to box. As the long line of black limousines went by, fans chanted like spectators at one of his fights, stood on cars, held up cellphones and signs, tossed flowers onto the hood of the hearse, and reached out to touch it. Truckers honked their horns in salute. Others fell silent and looked on reverently as the champ went by.

"It's a cool experience, you know, especially experiencing it with my brother and my dad," Tony Rodriguez told Local 10 News. "We drove down here. My dad was a pro fighter. So growing up watching him, you know, being surrounded by boxing, we looked up to him in our family. You know, he was just a good man."

Ali was to be laid to be rest about midday -- his headstone inscribed simply "Ali" -- in a private graveside ceremony, followed in the afternoon by a grand memorial service attended by more than 15,000 people, including former President Bill Clinton and comedian Billy Crystal.

Ali, the most magnetic and controversial athlete of the 20th century, died last Friday at 74 after a long battle with Parkinson's disease. A traditional Muslim funeral service was held Thursday, with an estimated 6,000 admirers arriving from all over the world. Hundreds of people crowded the streets in front of the funeral home.

Ali chose the cemetery, which is on the National Register of Historic Places, as his final resting place a decade ago. Its 130,000 graves represent a who's who of Kentucky, including Kentucky Fried Chicken founder Colonel Harland Sanders.

Family spokesman Bob Gunnell said the simple stone in Cave Hill Cemetery will be in keeping with Islamic tradition. Among the scheduled speakers at the memorial service at the KFC Yum! Center were Clinton, Crystal and TV journalist Bryant Gumbel. The king of Jordan was also expected to attend.

Ali himself decided years ago that when he died, the funeral would be open to ordinary fans, not just VIPs. As a result, thousands of free tickets were made available and were snatched up within an hour. Louisville is accustomed to being in the limelight each May during the Kentucky Derby. But the send-off for the three-time heavyweight champion and global ambassador for justice and understanding loomed as one of the city's most historic events.

"We've all been dreading the passing of the champ, but at the same time we knew ultimately it would come," Mayor Greg Fischer said. "It was selfish for us to think that we could hold on to him forever. Our job now, as a city, is to send him off with the class and dignity and respect that he deserves."

Tyson was added at the last moment to the list of pallbearers. Gunnell said that Tyson was highly emotional upon learning of Ali's death and wasn't sure if he could handle the memorial, but ended up catching a late flight.

Rumors that Donald Trump would attend were quashed Friday morning when Gunnell said the Republican presidential candidate called Ali's wife, Lonnie, to inform her that he was unable to make it.

President Barack Obama was unable to make the trip because of his daughter Malia's high school graduation. Valerie Jarrett, a senior White House adviser, planned to read a letter from Obama at the service.

People gathered early in the day outside Ali's boyhood home, which was decorated with balloons, flags, flowers and posters. Fans took photos of themselves in front of the house. Some people staked out their places nearby with lawn chairs.

The Ali Center stopped charging admission. A sightseeing company began tours of Ali's path through the city. Businesses printed his quotes across their billboards. City buses flashed "Ali -- The Greatest" in orange lights. A downtown bridge will be illuminated the rest of the week in red and gold: red for his boxing gloves, gold for his Olympic medal.

Back at his second home in Miami Beach, boxers at the 5th Street Gym, where Ali spent his early days training, reflected on the champ's life and legacy.

"When he worked out here, he was the biggest star in the world, the most recognizable face in the world, over the pope, and the doors were always open," owner Dino Spencer said.

DeCue King said Ali strived for greatness, both in the ring and in life.

"I really love for, more so what he stood for than the boxing, what he did for the civil rights movement and how he was just always positive, always influencing people," King said. "I try -- I strive -- to do the same thing." 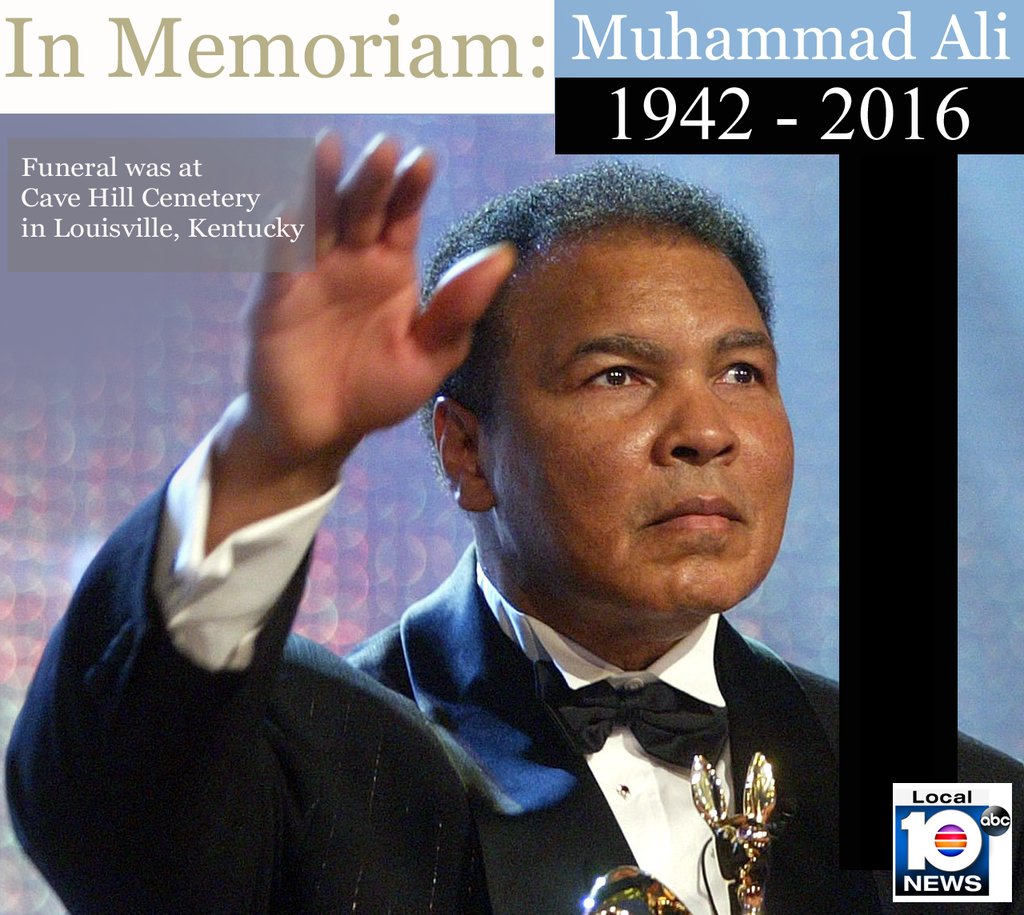