Small village always has these 'Legs' to stand on

CROSS VILLAGE, Mich. – The township supervisor of a small town in Northern Michigan is pretty blunt when talking about what the village would be like without a certain restaurant.

Cross Village is a township that sits right along Lake Michigan that has two big things going for it, neither of which are lots of people or businesses.

Reck said the town had 270 people counted in the last census, and besides a gas station, an art gallery that he owns, a Catholic church and a couple of souvenir stores, there isn’t much else besides trees, roads and farmland. There is a scenic stretch of road called the Tunnel of Trees that's popular with tourists, but not much else.

But as for what Cross Village does have working in its favor, there are two major factors. One is the breathtaking views of Lake Michigan found in many spots.

The other is the Legs Inn, a restaurant and historical landmark whose value can best be summarized in one statement: "We will regularly feed four to five times the population of Cross Village in our restaurant,” said Mark Smolak, a third-generation owner of the restaurant.

And that's definitely not an exaggeration.

If you think getting to the Legs Inn takes time given its remote location, getting a table is no quick process, either.

Oftentimes, it can be a two-hour wait for a table, but many don’t seem to mind.

First of all, the authentic Polish cuisine is well worth the wait, and it certainly helps that there are plenty of entertainment options to partake in while waiting.

There’s an arcade with a mix of old and new games to entertain kids, a gift shop and a garden area in the back that's pretty spectacular.

Flowers and plants along a mulch trail are located next to the dining area on the patio, which is right next to a grassy area that also serves as a jaw-dropping overlook of Lake Michigan.

People routinely grab drinks and head out to the garden to get pictures and view the lake while waiting for tables, with sunset being the peak time for the garden activities.

The building itself, named for the cast iron stove legs that are on the roof’s rail, features Native American art and handiwork throughout that’s a tribute to the Ottawa and Chippewa Indians whom original founder Stanley Smolak befriended when he settled in Cross Village in 1921.

“It’s the centerpiece,” Reck said. “It was the only thing that was here for a long time.”

With so many visitors and so few people in the town, where does the Legs Inn get its workforce?

That's yet another way in which the restaurant is unique. 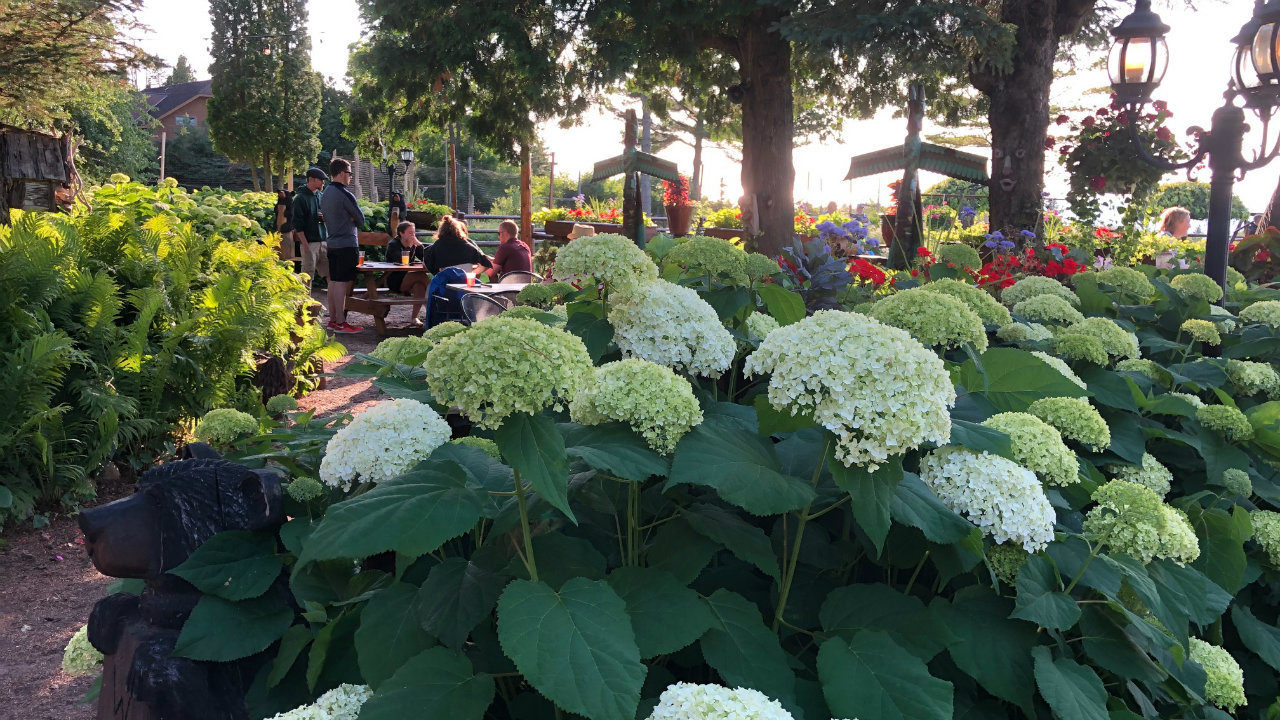 An immigrant of Poland, Smolak had a plan to have his only son, Joe, take the reins of the restaurant.

But that ambition was ruined when Joe tragically died at the age of 30 in a 1953 auto accident.

In need of help, Stanley traveled back to his native Poland to reunite with family members, who ultimately immigrated to the United States themselves and help set in motion generational family ownership.

Stanley’s brother, John, ended up taking over restaurant operations after Stanley died in 1968, and after John’s death in 1972, his son, Alex, took over.

In 1987, John’s youngest son, George, handled restaurant operations along with his wife Kathy, and did more than just create the garden and patio area that he still to this day maintains daily.

He also set in motion the way the Legs Inn gets its workforce, similar to Stanley going to Poland for help once his son died.

The restaurant created a foreign exchange student program, where college-aged kids could come from Poland to this tiny town to live and work at the restaurant.

It was the best way the restaurant could recruit workers to accommodate all the tourists who would flock to Northern Michigan each summer.

“We’ve had exchange students just based on necessity,” said Mark Smolak, George’s son who helps with the current operations of the restaurant. “We started using it based solely on need. It’s something the guests have loved, and we’ve continued that tradition. People meet people from different parts of the world.”

The students stay in cabins that were built next to the restaurant or at other housing in the village, with this year’s group of students including people from the Ukraine and Belarus.

Mark Smolak said the restaurant uses an agency to help advertise the job opportunities to people in Poland, and it has led to lasting relationships between people across the world for years.

He cited an example of an American bartender who worked at the restaurant and fell in love with a Polish waitress who was over working at the Legs Inn for the summer, but had a boyfriend back home.

The waitress came over to work at the restaurant with her boyfriend’s best friend.

“The joke was that he was a bodyguard,” Mark Smolak said.

Ultimately, the waitress went back to Poland, much to the disappointment of the bartender.

A few months later, Mark Smolak said that bartender got a phone call from Poland.

“He got a message from her in the fall, saying ‘You’re not going to believe this, but I broke up with my boyfriend.’ He bought a ticket, flew over there, and they’ve been together for the last two years.” 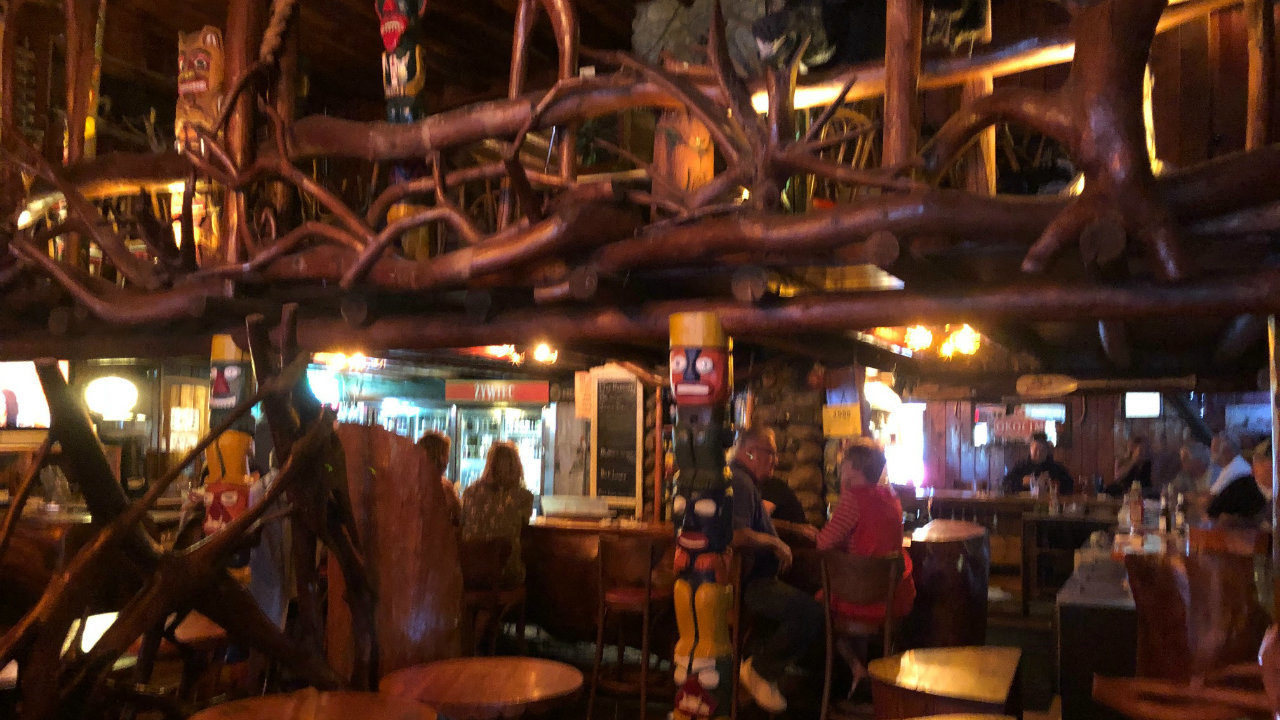 Smolak said there are countless stories that, while not in the scale of that love story, emphasize friendships made between the students or the students and the visitors who love hearing their backgrounds, even though there is one big adjustment for the students when they come over.

“They are in the middle of nowhere,” Smolak said. “We try to explain to them that people are going to be waiting two hours to have lunch or dinner that come from all over the place because we are such an overwhelmingly word-of-mouth destination.”

Given its status as a historical landmark and the tourists from around the Midwest who flock to the restaurant for annual summer visits, it seems the word is definitely out about Legs Inn.

“It’s sort of a tradition for many, many people,” Reck said. “It’s part of their summer.”

After all, it’s not often a restaurant can each day feed five times the population of a town.