A Tropical Storm Watch was issued from Deerfield Beach to Sebastian Inlet ahead of Hurricane Dorian, the first watch declared in Florida.

In the 11 p.m. advisory, Dorian was still a fierce Category 4 storm with winds at 150 mph and moving west at 8 miles per hour.

The future track of Dorian in the Monday-Tuesday time frame is still fuzzy in spite of today’s shift in the cone away from South Florida. Miami-Dade and Broward counties still have to watch for developments.

Dorian's peak winds will fluctuate as the storm grows in size over the next few days, but it is expected to remain a top-end hurricane as it moves over or near the northwestern Bahamas – the Abacos and Grand Bahama Island.

The worst weather with Dorian is expected to begin in the northern Bahamas on Sunday, and continue at least until Tuesday as the storm stalls and drifts around. The question is, where will that drifting take place?  And how close will the storm be to South Florida when it happens.

Even though Broward and Miami-Dade Counties are outside of the cone, that doesn’t mean that significant effects cannot occur. If Dorian were to track, for example, down the left side of the cone – the side closest to South Florida – winds could gust over 40 mph, especially in Broward County, but possibly in Miami-Dade as well.

If the hurricane tracks down the center of the cone, South Florida would only get fringe effects - some gusty downpours – on Monday and Tuesday.

Most of the computer forecast models track Dorian just to the north of the Bahama Islands, keeping it far enough away from South Florida to minimize the effects in Dade and Broward. But the European model tracks Dorian south of those islands, closer to the left side of the cone, which would make it gustier in South Florida and more threatening on the coast to the north.

A Tropical Storm Watch has been issued for Palm Beach County and the Treasure coast in case Dorian tracks on the left side of the cone, it could produce winds over 40 mph there. The Watch will be extended up the coast as time goes on, if that left-side track seems possible.

The bottom line is that we need to be aware of the possibility of gusty squally weather on Monday and Tuesday in South Florida. Dorian will be moving very slowly, so it is not going to surprise us.

CONCERNING SHUTTERS: If it were me, I would NOT put my shutters up in Miami-Dade or Broward. But I’d double-check Sunday morning to be sure nothing has changed. There will still be plenty of time to do it on Sunday.

By midweek, most of the latest possible tracks are well offshore of the Florida east coast, although the cone still shows threatening possibilities. By late week, Dorian may threaten the Carolinas or farther north. 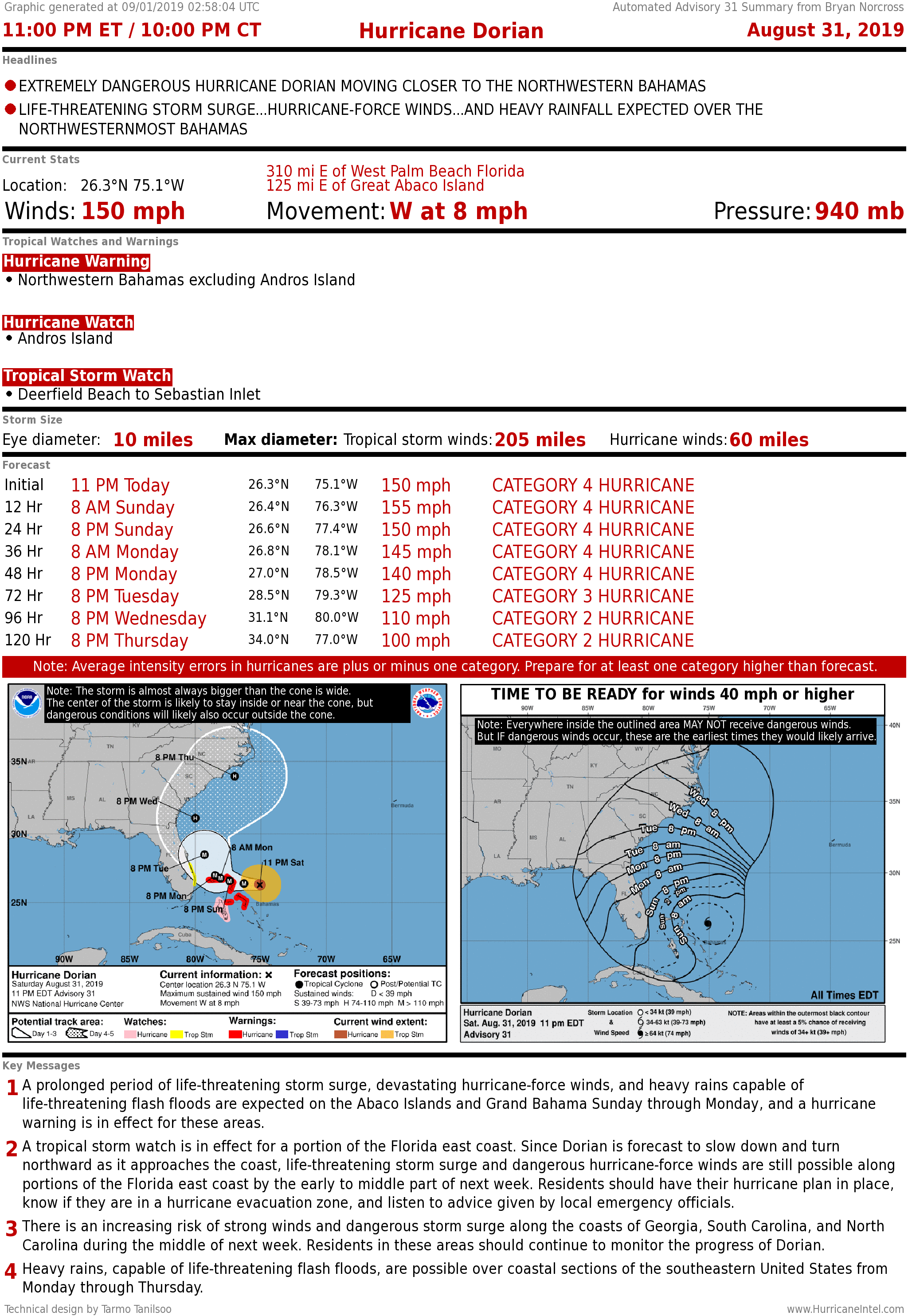 The Key Messages about Hurricane Dorian from the National Hurricane Center are:

1. A prolonged period of life-threatening storm surge, devastating hurricane-force winds, and heavy rains capable of life-threatening flash floods are expected on the Abaco Islands and Grand Bahama Sunday through Monday, and a hurricane warning is in effect for these areas.

2. A tropical storm watch is in effect for a portion of the Florida east coast. Since Dorian is forecast to slow down and turn northward as it approaches the coast, life-threatening storm surge and dangerous hurricane-force winds are still possible along portions of the Florida east coast by the early to middle part of next week. Residents should have their hurricane plan in place, know if they are in a hurricane evacuation zone, and listen to advice given by local emergency officials.

3. There is an increasing risk of strong winds and dangerous storm surge along the coasts of Georgia, South Carolina, and North Carolina during the middle of next week. Residents in these areas should continue to monitor the progress of Dorian.

4. Heavy rains, capable of life-threatening flash floods, are possible over coastal sections of the southeastern United States from Sunday through much of next week.

Elsewhere, the disturbance that caused the periods of heavy rain in South Florida the last couple days is moving into the Gulf. It has a chance of developing into a tropical depression in the western Gulf of Mexico midweek. It would likely drift toward Mexico.

In the far eastern Atlantic, a tropical disturbance that has moved off of Africa is expected to strengthen, but is not threat to land. It will track north into the Atlantic. There are at least two disturbance behind it, however, that we may have to watch later next week.