Incredible Category 5 Hurricane Dorian is causing catastrophic damage in the Bahamas due to its extreme strength.

Even though it's expected to stay well offshore of South Florida, there is a possibility that winds over 40 mph could affect Broward County, so a tropical storm watch is in effect for the area.

As of 5 p.m., Dorian had top winds of 185 mph. As a fierce Category 5 hurricane, it is one of only four hurricanes on the record at this kind of strength.

Dorian's two-day assault will be devastating for those islands, and Local 10 News meteorologists are very fearful for what will happen there. Our thoughts are with those residents. They will have a Hurricane Andrew South Dade experience but with the wind blowing for two days.

As Dorian creeps west over or near Grand Bahama Island, the area seeing winds over 40 mph will slowly move toward the Florida coast.

Dorian will come close enough to Broward County, that out an abundance of caution, the National Hurricane Center is alerting us of the possibility of 40 mph winds. Therefore, a tropical storm watch is in effect for Broward County. This means that winds over 40 mph are possible.  This does not mean they are going to happen, but it's going to be a close call.

Winds in that range can take down branches and knock out power.  It also can be dangerous to drive because a branch or a coconut could fall on your car, and the gusts on elevated or exposed roadways and bridges can affect vehicles.  Buses and high-profile vehicles are especially vulnerable.

We do not expect winds that would threaten any well-built building.  The wind will come from the northwest to west, so if you have any vulnerable openings on that side of the house, you might shutter them out of an abundance of caution.  If you have your shutters up, it's recommended you keep them in place.  Otherwise, it's suggested to not put up shutters at this point, except for the above caveat.

The situation is different from Palm Beach County north on the Florida coast.  There are hurricane watches and warnings because the storm is expected to come close enough that evacuations and protective action are required.

The winds in South Florida will increase through the day tomorrow (Monday) and are expected to peak late Monday into early Tuesday morning.  On Tuesday, they should decrease through the afternoon as the storm pulls away to the north.

From now until the storm moves away, we expect periods of tropical downpours in bands rotating around Dorian.  These squalls will have unusually gusty winds.

The strongest wind in Broward and Miami-Dade countiees will be from the northwest direction, plus or minus, so it should not significantly enhance the king tides, except perhaps in Florida Bay.  It could also raise the Biscayne Bay water on the west side of Miami Beach.

Hurricane Dorian will track very near or offshore the Central and North Florida coastline.  Significant effects from storm surge, very heavy rain and strong wind may affect the coast, but it's too early to know how bad it will be.

Coastal residents in Georgia and the Carolinas are on high alert. 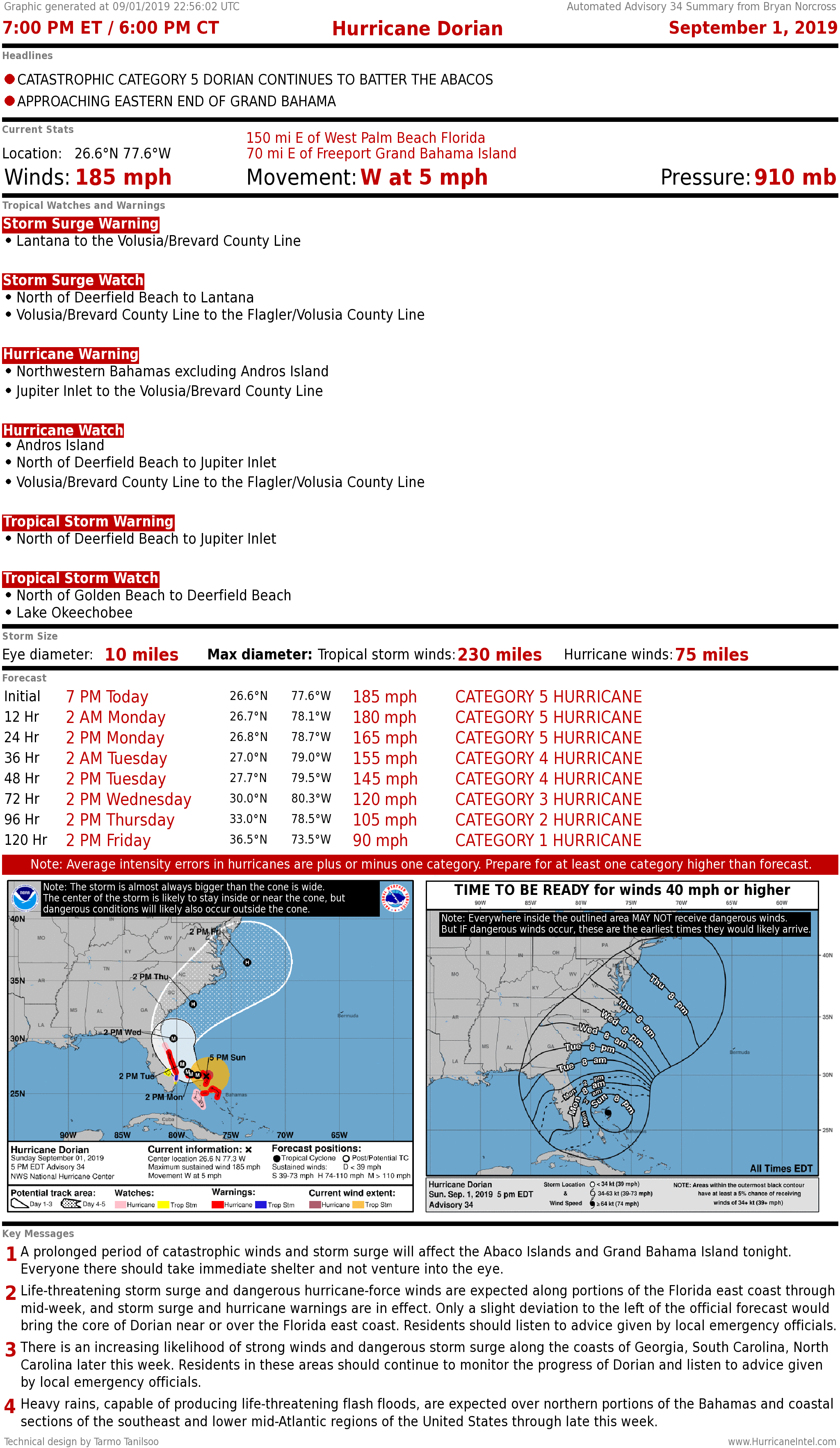 Here are the Key Messages from the National Hurricane Center:

1. A prolonged period of catastrophic winds and storm surge will affect the Abaco Islands and Grand Bahama Island tonight. Everyone there should take immediate shelter and not venture into the eye.

2. Life-threatening storm surge and dangerous hurricane-force winds are expected along portions of the Florida east coast through mid-week, and storm surge and hurricane warnings are in effect. Only a slight deviation to the left of the official forecast would bring the core of Dorian near or over the Florida east coast. Residents should listen to advice given by local emergency officials.

3. There is an increasing likelihood of strong winds and dangerous storm surge along the coasts of Georgia, South Carolina, North Carolina later this week. Residents in these areas should continue to monitor the progress of Dorian and listen to advice given by local emergency officials.

4. Heavy rains, capable of producing life-threatening flash floods, are expected over northern portions of the Bahamas and coastal sections of the southeast and lower mid-Atlantic regions of the United States through late this week.

Elsewhere in the tropics, there are a few areas of disturbed weather that may develop, but none to be concerned about this week.