Spat between Miami commissioners leads to meeting being adjourned early

Suspect at The Falls pulls out knife shaped like gun, that’s when officer shoots, police say

South Florida Democrats stand with Israel amid fighting with Hamas

City manager: Commission meetings ‘have devolved into a circus’

MIAMI – A retired U.S. Army colonel who has had a long career in public service that includes being an adviser to former President George W. Bush had enough of Miami politics on Thursday after managing the city’s $1.7 billion budget for two years.

Miami City Manager Emilio T. Gonzalez, who served as the director of the Miami-Dade Aviation Department for about five years before taking the job at City Hall in 2018, resigned Thursday. He talked to Local 10 News reporter Glenna Milberg about Commissioner Joe Carollo’s accusations that he had abused his power to get a permit for a deck.

“I have other priorities taking my time -- time which I refuse to spend on this silliness,” said Gonzalez, who accepted an invitation to continue the conversation on “This Week in South Florida” at 11:30 a.m. Sunday.

Gonzalez said Thursday night that he needed to spend more time with his family. His wife, Gloria Gonzalez, has been ill. His resignation letter appeared to be a reaction to Carollo’s behavior during commission meetings in December and January.

“Our city commission meetings have devolved into a circus,” Gonzalez wrote in his resignation letter. “Personal discussions have given way to the politics of personal destruction.” 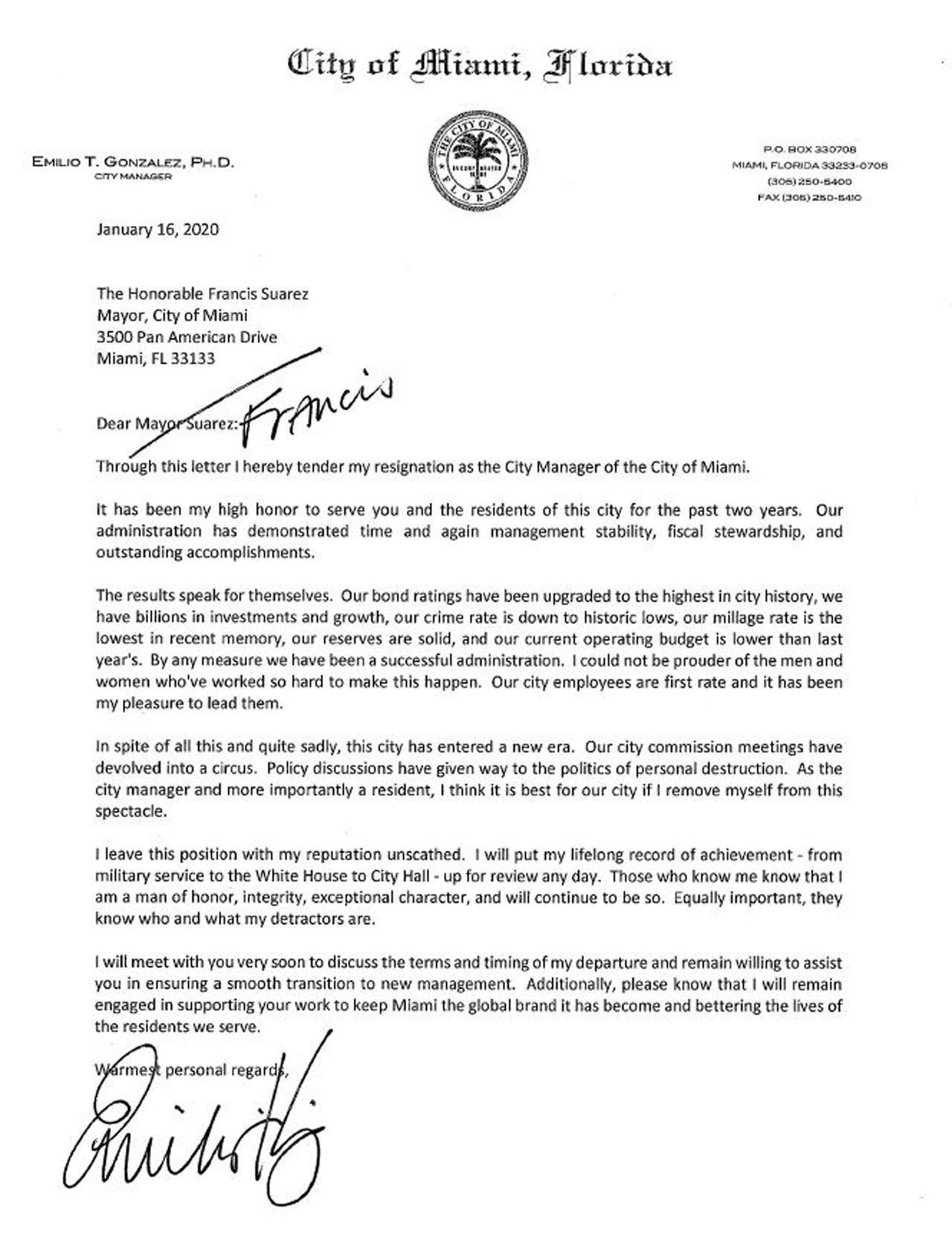 According to Rene Pedrosa, a spokesman for the city, Gonzalez’s resignation is not effective immediately. Gonzalez plans to give Miami Mayor Francis Suarez enough time to find his replacement, Pedrosa said.

“Thank you, [Gonzalez] and [Deputy City Manager Joe Napoli] for your service to the City of Miami,” Commissioner Ken Russell wrote on Twitter. “You leave the city better than you found it and should be proud of the team that you have assembled.”

Carollo responded by saying the city did not need “some kind of military governor.”

During a public meeting Dec. 12, Carollo accused Gonzalez of abusing his power to get six departments to sign off on the permit. Carollo’s motion to fire Gonzalez failed.

Commissioners did agree to have the auditor general investigate the allegation. When Suarez attempted to stop the internal investigation, the city attorney said he lacked authority.

“As elected officials, we must always put the needs of the residents of the city of Miami first,” Commissioner Manolo Reyes wrote on Twitter. “It is time to turn the page and look towards the future, and do the work the people elected us to do.”

About a decade before working with Suarez, Gonzalez was an adviser to Bush and Condoleezza Rice, the former secretary of state. Bush appointed Gonzalez to serve as director of U.S. Citizenship and Immigration Services, a position he held from 2005 to 2009.

Gonzalez, who spent 26 years serving in the U.S. Army, also served as the director for Western Hemisphere Affairs at the National Security Council and had a leadership position with U.S. Southern Command. Gonzalez, who taught at West Point, has been awarded decorations from the governments of El Salvador, Mexico, Colombia, Guatemala, the Dominican Republic, Honduras and Nicaragua.

Formerly with the Miami-based Tew Cardenas law firm, Gonzalez also has experience in the private sector with Indra, a company specializing in IT solutions.

Spat between Miami commissioners leads to meeting being adjourned early