Colleagues ID teacher shot, critically wounded on I-95 over weekend

Coronavirus pandemic wipes out decade of job gains in 1 month

MIAMI – The long line of drivers waiting to receive food donations outside of the New Birth Baptist Church on Friday near Opa-locka was a reflection of how sudden the coronavirus pandemic hit the economy. It was a sudden downturn and many were not prepared for it.

In February, the jobless rate was 3.5% and it went up to 4.4% in March. Many workers in Miami-Dade and Broward counties started to dip into savings when hotels, restaurants, bars, nightclubs, sporting venues, movie theaters, and shops closed.

Without a vaccine to prevent the coronavirus disease, economists warn the downturn in the leisure and the hospitality industries is just beginning. On Friday, the feds reported the unemployment rate surged to 14.7% -- erasing a decade of job gains in one month.

“What I can do is I’ll bring it back,” said President Donald Trump, who is campaigning for re-election in November. “Those jobs will all be back, and they’ll be back very soon, and next year, we will have a phenomenal year.”

Economists have a more gloomy picture. U.S. Secretary of Labor Eugene Scalia said in a statement the April data released on Friday doesn’t reflect the layoffs that occurred in late April and early May. Some economists estimate the U.S. unemployment rate actually nears 24%.

“This is through no one’s fault of their own,” said Diane Swonk, chief economist at Grant Thornton. “It is like a meteor hit the planet and knocked it off its orbit ... the actual unemployed are much higher than the percentages tell us -- and they are depression-era levels." 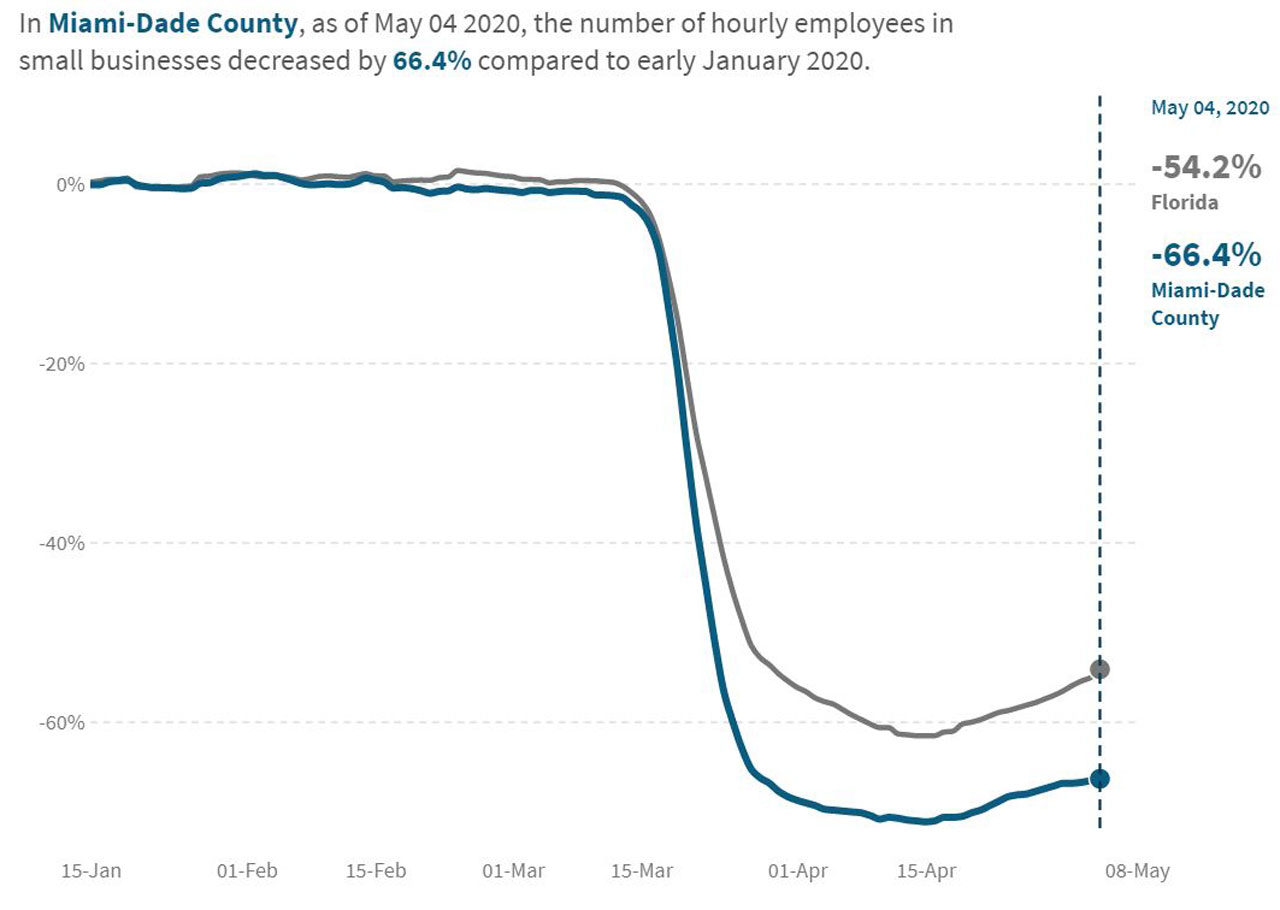 Many small businesses in South Florida may not be able to survive the crisis. About 20.5 million jobs vanished nationwide in April.

Florida’s system to distribute unemployment insurance benefits was ill-equipped for the crisis. The Trump administration quickly sent $1,200-per-person relief checks, but the state is moving slowly with the $600 in weekly federal unemployment benefits.

“We have made some progress, but I want more progress because now is the time we really want to have people to have the money,” Gov. Ron DeSantis said on Friday referring to the reopening of most of the state.

With a rebound in hiring and a significant reduction in furloughs as the degree of social distancing diminishes, the unemployment rate is projected to decline to 9.5 percent by the end of 2021, according to the Congressional Budget Office.

Swonk believes the economic recovery will take time -- especially with everything tied to the travel and tourism industry. Without a vaccine, economists expect a lot of false starts.

“There is no ‘Field of Dreams’ moment, where all of a sudden, ‘If you reopen it, they will come,’" Swonk said, adding, “People still don’t show up, when you’ve got contagion as a real threat. I fear that we are going to see yet another round of layoffs even as workers are called back.”

As the #COVID19 crisis continues to exacerbate the structural inequities of our labor market, workplace power has never been more important. In a new report, @awh surveys the imbalance of power American workers face on the job. https://t.co/j4R0gdqDef

Just when Black and Hispanic workers were finally recovering from the depths of the Great Recession, disaster struck. Hispanic, black, and white unemployment rates have all exceeded their highest levels in the last recession. Policymakers must act at the scale of this crisis. pic.twitter.com/lizPP3xhSy

The danger workers are facing in meatpacking, Amazon warehouses, and other workplaces across the country was preventable.

Congress must act NOW prevent more workers from getting #COVID19

Tell Congress to pass the Every Worker Protect Act of 2020:https://t.co/ux3iTcUmVx pic.twitter.com/PeuN5BJWvX

"Workers in low-wage industries, women, and those with a high school degree and some college are experiencing the largest upticks in unemployment." Check out the latest from @HBoushey and @CSanchezCumming 👇https://t.co/BKcPWtctEn

My CBPP colleagues crunched some interesting/important numbers here--one's that aren't in the report--re which groups of workers are getting disproportionately whacked. https://t.co/1DLntU55ok

President Donald Trump acknowledges fear on both sides of the coronavirus crisis, with some Americans worried about getting sick while others are concerned about losing jobs.

Christina returned to Local 10 in 2019 as a reporter after covering Hurricane Dorian for the station. She is an Edward R. Murrow Award-winning journalist and previously earned an Emmy Award while at WPLG for her investigative consumer protection segment "Call Christina."