MIAMI – Nine-year-old twin brothers Jason and Jared said they are going to miss their mother this Christmas. They were 3 when she died of cancer. Jason, who was more attached to her than Jared, is still angry about it. And when emotions run riot, it's not easy to stay on track in school.

The twins remember telling their teacher at Small World Montessori School in Miami Gardens their mom was dead, because they wanted her to know why they were sad. The anger crept up later at Dr. Frederica S. Wilson/Skyway Elementary School, also in Miami Gardens.

Jared said two boys were bullying him when Jason intervened with swinging looping punches. Jason didn't like that school, which is now saddled with an "F" grade. He said his teacher spent a lot of time on her phone. Sometimes the food they served wasn't warm. It just lacked joy, he said.

"Every time I saw my teacher in the morning, I said, 'Good morning Mrs.' and she doesn't even say nothing. I thought to myself, 'Is she angry already?' It seemed like to me that she wasn't happy with us," Jason said. "They had a lot of foster kids there. ... Their parents gave them up. Their parents were like selling drugs down the street and they couldn't take care of them any more."

Jared said he is worried about Jason. State-mandated testing results are threatening to keep his brother trapped in third grade for the third year. The boys are not alone in their fear. In South Florida, there are some two dozen schools where only 5 percent to 20 percent of third-grade students passed the reading and writing test required to be promoted to fourth grade.

Jeb Bush's push to tie the standardized reading test performance to fourth-grade promotion continues to affect public schools, where the majority of students come from low-income families, according to data from the Florida Department of Education.

The low-income students face this challenge as school-funding inequities continue to be an issue nationwide. Before the push for new standards and punitive measures, schools were dealing with the racist history of slavery and segregation that supported a model favoring schools in primarily affluent neighborhoods.

The complex public school funding formulas continue to include a large chunk from property taxes. School districts try to bridge the gap with state and federal funding that they are now sharing with charter schools, which have an ally in Betsy DeVos, President-elect Donald Trump's nominee for education secretary.

The challenged schools in Miami-Dade and Broward counties -- where 20 percent or less of the third-grade students passed the Florida Standards Assessments English Language Arts test -- service mostly students who are black or are learning English as a second language. An "F" grade charter school is the exception.

Only 5 percent of third-grade students passed the FSA ELA test at Lillie C. Evans K-8 Center. The campus sits near the predominantly black neighborhoods of Brownsville, West Little River, Little Haiti and Liberty City. It's in proximity to the shootings that killed Sherdavia Jenkins, 9, a decade ago, and wounded a toddler Dec. 2.

In search of the right instruction, the twins have already been to three elementary schools -- two in Miami Gardens and one in Hialeah. While at Dr. Frederica S. Wilson/Skyway Elementary, they remember taking the Stanford Achievement Test, the Florida Comprehensive Assessment Test and the FSA.

When the two failed the FSA, they attended summer school at Joella C. Good Elementary School in Hialeah. The twins do everything together, but that changed when one failed the FSA. Jared moved on to fourth grade at Scott Lake Elementary School, while Jason was forced to go through third grade for the second time.

To prepare for the test the boys said they spend a lot of time working daily on iReady, an online product that Miami-Dade County Public Schools buys from Curriculum Associates, a growing Massachusetts privately held company that reported tripling in size last year.

The standards that Bush supported "led schools to revisit what they had in their classrooms. We matched the rigor of those standards exceptionally well, which led people to subscribe and buy our materials," iReady producer Curriculum Associates' founder Frank Ferguson told the Boston Business Journal last year about his successful business model.

Many teachers and parents question the quality and reliability of iReady and the other data-driven tools that have made their way into public schools with the new standards. They argue that while policy-making bodies are favoring the education technology vendors' interests, they are forgetting about the power of the relationship between an intuitive and creative teacher and a student in need.

There is a thorny controversy between teacher unions, organizations like the  Foundation for Excellence in Education, which believes the new standards and supportive programs like iReady are a success, and the National Center for Fair and Open Testing, which works to prevent the alleged misuse of standardized tests. The twins are oblivious.

"I just do what I am told," Jared said. "If mom was here, she would want us to do our best and that's what we do. Even that time when I didn't know the answers. I didn't give up. I was guessing and didn't finish it, but I did not give up. "

Jared said the results of the test attracted bullies and hurt his brother, who has cried about it. Jason is working with a tutor. He can still take an alternate test or provide a portfolio of work, but it’s up to his principal to appeal to the school district to make the final decision.

The twins' grandfather worries about them not having time to play because they are getting so much test prep and homework. Their grandmother is concerned about how the testing has sealed Jason's distorted perception of himself as the "bad one."

"Yes, but you can't give up," a teary-eyed Jared tells Jason.

Where third-grade students are failing in South Florida 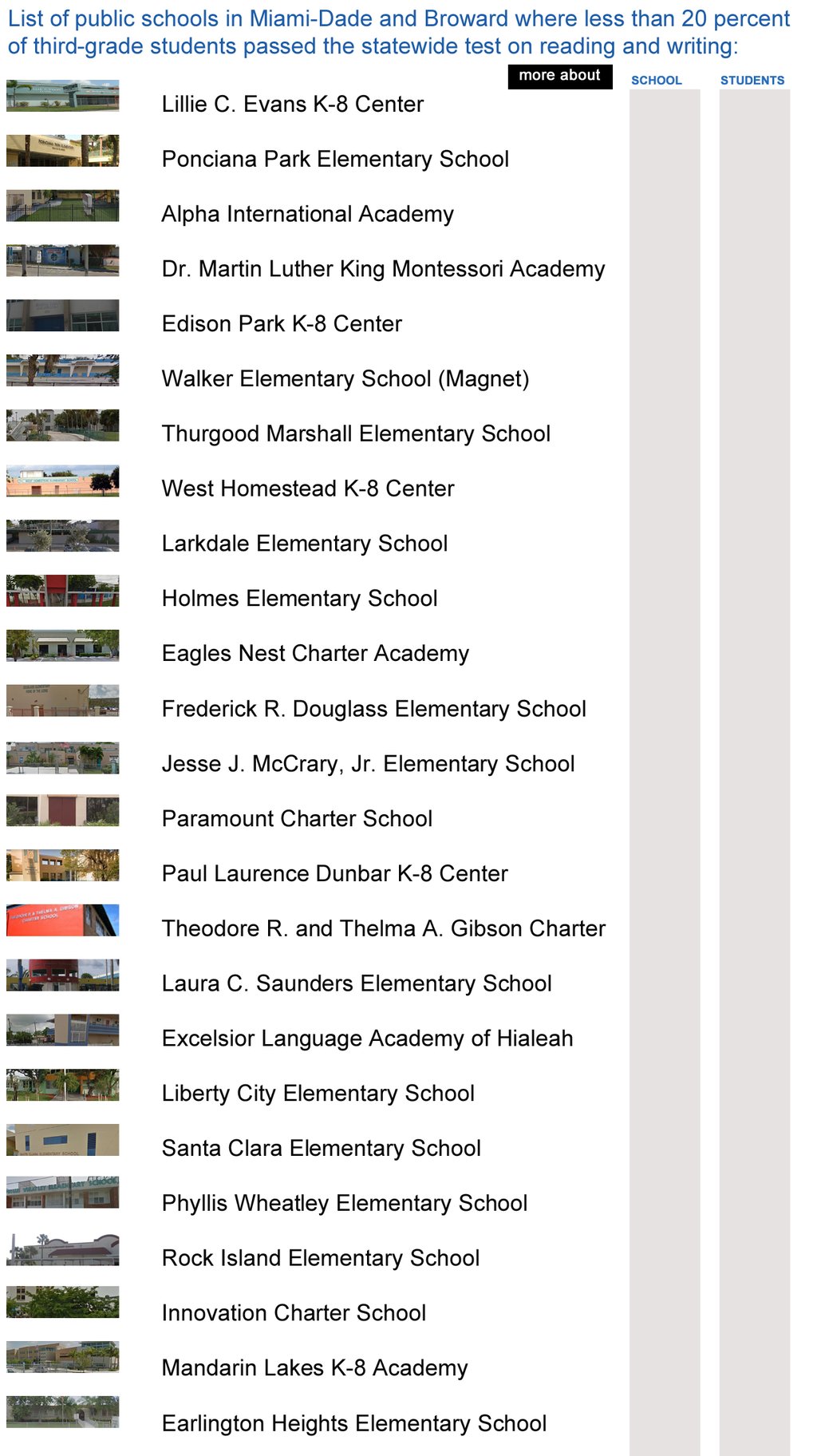 The names of the children were changed to protect their identity.