Arrest made after student shot outside Miami Gardens high school

He and 12 others took to the sea on the morning of Christmas Eve and made it to Turkey Point by Monday. He said he left the communist island on the rickety boat because the economic situation there is difficult.

"The night of Christmas Eve was bad," he said in Spanish, adding that the engine stopped working and they used a bed sheet as a sail.

Sosa Perez is among the new spike of migrants from Cuba, who are risking it all to make it to the U.S. before the U.S. immigration policy changes. Cold War-era politics allow Cubans to remain in the U.S. as political refugees if they find a way to make it to U.S. land.

Under the "wet foot, dry foot" policy, Cuban political refugees can remain in the U.S. and become legal residents after a year of living in the U.S. The fear is that this will soon end since President Barack Obama and Cuban President Raul Castro announced Dec. 17, 2014 that they were re-establishing diplomatic relations.

The U.S. and Cuba were negotiating terms that would allow U.S. airlines to begin flying to and from Cuba. Among the airlines interested are American Airlines, Delta, JetBlue, United and Southwest.

After thousands of Cubans left the island on flights to Ecuador and some remained trapped in Costa Rica, Castro said he wants the U.S. to change its immigration policy.

While Solis' administration wants a "humanitarian corridor" to allow the Cubans to make it to the U.S., Costa Rica stopped issuing special transit visas for Cubans and was planning on deporting 56, who were being held in San Jose.

There were Cubans also trapped in Panama. The crisis in Central America prompted Pope Francis to make a plea at St. Peter's Sunday.

"I ask the countries of the region to generously resume efforts to find a quick solution to this humanitarian drama," Pope Francis said, referring to the Cubans stuck in Costa Rica, after the government of Nicaragua did not allow them in.

Meanwhile, the U.S. Coast Guard reported an increase in boat thefts. Experts believe these are related to human smuggling. According to the Lee County Sheriff's Office, after the theft of a 36-foot boat in Fort Myers Beach Thursday, a fast-speed chase ensued for about 20 hours.

Also this weekend, 15 Cuban migrants made it Marathon Key about 4:15 a.m. About five hours later, some two dozen made it to lower Matecumbe Key. Another vessel arrived in Key West at Fort Zachary Taylor State Park. And soon after, deputies found one migrant near mile marker 57 in Grassy Key. 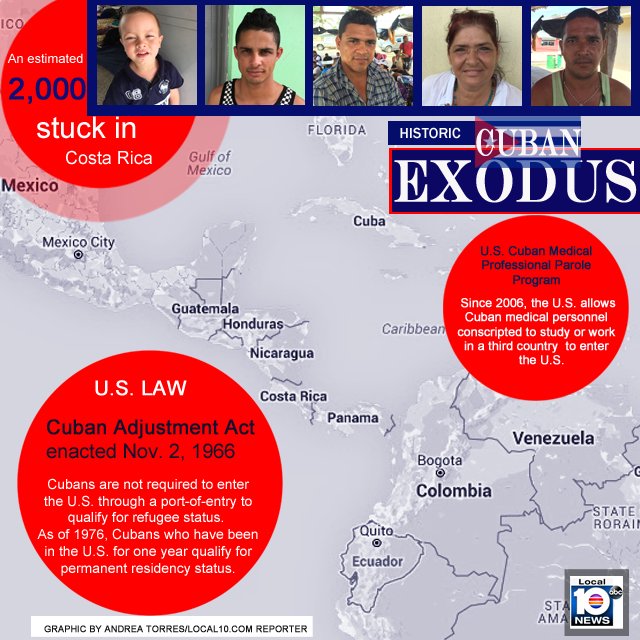 Copyright 2015 by WPLG Local10.com. The Associated Press contributed to this report. All rights reserved. This material may not be published, broadcast, rewritten or redistributed.