MIAMI BEACH, Fla. – When FBI agents surprised former NFL and University of Miami football star Jeremy Shockey at his Miami Beach penthouse on a Friday afternoon in late February with questions about one of his best friends, the retired tight end invited them inside.

But after about 20 minutes of questioning, sources said, the 35-year-old Shockey became fed up with the questioning about his pal Owen Hanson, who was indicted in January on charges he ran an international NFL-connected drug and gambling ring. So upset was Shockey that he kicked the agents out of his condo.

About a week after the testy visit, Shockey received another surprise: A subpoena to appear before a federal grand jury in the Hanson criminal case in San Diego, confirmed Jeffrey Sloman, the Miami attorney Shockey hired to represent him in the investigation.

Sloman, a former U.S. attorney in Miami, was able to do something for Shockey most could only dream about. Sloman said that he convinced the feds to withdraw the subpoena in exchange for a promise that Shockey would answer any and all questions voluntarily in a personal interview with federal prosecutors. That meeting, he said, has not yet occurred.

There's a reason the feds are interested in Shockey. He was very close with Hanson, a former walk-on football player at USC who is accused of ring-leading a massive criminal operation that dealt in large amounts of cocaine, heroin, methamphetamine and Ecstasy, as well as an illegal gambling operation based in Costa Rica.

Twenty-two people were charged in the ring -- including former NFL running back Derek Loville, who won two Super Bowls with the Denver Broncos. Loville, who made millions in his NFL career, is charged with distributing drugs for Hanson.

The indictment also alleges that the ring shipped a package of cocaine and Ecstasy to an unnamed NFL player in Nashville on Nov. 17, 2014, the same day the Tennessee Titans lost at home to the Pittsburgh Steelers on "Monday Night Football."

Shockey was on the list of Hanson phone contacts, as was NFL running back and ex-Dolphin Reggie Bush, who played at USC at the time Hanson was on the team, records show. Sloman said Shockey initially met Hanson while playing with Bush on the New Orleans Saints, where he won a Super Bowl in 2010.

Shockey traveled to and from Los Angeles with Hanson and that Hanson had stayed at Shockey’s Miami Beach condo, confirmed Shockey. There was also a trip to Costa Rica, where Hanson ran his gambling operation, but Sloman said that while Shockey may have seen Hanson there, he didn’t go to Costa Rica for any business purpose.

"He was friends with Owen. He wasn't in business with him," Sloman said. "He didn't know anything about Owen's business. Zero. There was never a trip Jeremy took to Costa Rica with the purpose to bet or inspect the gambling business [Hanson] was in. He thought it was a legal offshore gambling business. That was the extent of what he knew."

One confidential source in the case, dubbed "Individual A" by the FBI in the indictment,  said he doesn't believe it.

"How do you travel the world with the guy and not know he’s a drug dealer," the source told Local 10 News in his first televised interview on the case. "He’s got four or five drop phones. How do you not say, 'Why do you have all these phones?' So I don't believe it."

Individual A is a professional gambler living in the Los Angeles area who is also known as "Robin Hood 702" for a charity he operated with gambling proceeds. He asked that his real name not be used here due to safety concerns.

According to the indictment, Hanson and others involved in the ring terrorized him and his wife prior to "Individual A" going to the FBI to help them bust the drug ring. He claims Hanson tricked him into effectively laundering cash for the drug ring when he offered to stake him as a gambler at The Star casino in Sydney, Australia.

"He wanted to put up some money for me to gamble with," Individual A said, adding that wasn't unusual. "He was a very well-dressed guy, very well-spoken. To me he seemed like he was either a real rich guy or his family was really rich. He said he was a businessman."

He said he met Hanson in Sydney and gave him $1.5 million cash "like it was a couple grand." He said that during a visit to Hanson's apartment, the former USC walk-on opened cabinets displaying stack after stack of cash, millions of dollars.

He said he gambled the $1.5 million on his game, blackjack, and won $300,000. He said he returned to the America, where he then lost a good deal of it in Las Vegas before winning most of it back. He said he wound up about $100,000 short of the $1.5 million and returned it in three payments, including $1 million Hanson himself at the Fairmont Miramar Hotel in Santa Monica and the rest to two Hanson family members.

Individual A said he didn't realize at the time that he had just moved what the FBI alleges was a portion of Hanson's extensive cocaine profits from Australia to the United States, undetected by any financial institution. He said he met Hanson a second time in Sydney and that this time he had two suitcases with $2.5 million. He said he told Hanson he didn’t want to take the money.

"I had a weird vibe that I shouldn't do it. I didn't know if it was dirty money. I thought something was up. I couldn't pinpoint it," Individual A said. "He said, 'Look, you're going to do this.' … He started telling me that he knew where my wife was, he knew where I lived, if I didn't do this there would be a lot of problems with me. That's the crazy part. I've never had anybody threaten me to take $2.5 million in my life."

He claimed he took the cash, went to The Star, sat down at the blackjack table and started betting.

"What I told the FBI, I left it up to the gambling gods," Individual A said. "I literally bet the max hand every hand and the gambling gods told me I wasn’t supposed to gamble this money because I blew through the whole $2.5 million. When it was happening I felt like it was the right thing to do but afterwards, I'm like, 'Oh (expletive), I just blew this $2.5 million. There's going to be some repercussions.' And then that's when the repercussions came."

He said that one of Hanson's Australian cohorts caught up with him and he told him he blew the money. After death threats, they incredibly at that point, incredibly, the ring demanded that he take more money.

"After I blew $2.5 million, they're going to give me more money to put into the casinos," the informant known as Individual A said. "[They said] now my ass is theirs. I'm working for them now. I'm going to work off this $2.5 million."

They set up a meeting in another hotel room for him to pick up the cash, he said. But instead of going there, he made an anonymous call to hotel security, who who went to the room and seized $702,000 in cash, a number that matched Individual A's nickname in the gambling world, Robin Hood 702.

The discovery started an investigation by the New South Wales Police Force Australia that would culminate in criminal charges against several alleged members of the ring in September, including Hanson.

After tipping off authorities, Individual A said he went back to Los Angeles, where the FBI alleges in the indictment that Hanson began a campaign of fear and intimidation against him.

There were alleged death threats, including a DVD sent to his apartment showing the gruesome decapitation of two unknown men, one with a chainsaw, the other with a knife. It's not known where that video originated.  Included was a video of a Spanish-speaking man, his face covered and a gun in his hands, threatening Individual A and his wife by name, saying they would be next if he didn't return the money.

Hanson also hired a private investigator in Los Angeles, Daniel "Danno" Portley-Hanks, to investigate Individual A and ultimately to desecrate his parents' grave site, according to the indictment.

Portley-Hanks, who has been charged with racketeering and other felony charges in the case, admitted to Local 10 News that he worked for Hanson and drove from California to Pennsylvania to pour red paint on the gravestone. He said he had no idea Hanson was involved in any alleged crimes and believed he was a businessman trying to settle scores with rivals.

"I felt terrible at the time I was doing it, but I was broke," said Portley-Hanks, who posted a $50,000 bond to get out of federal prison and could spend the rest of his life in prison. "I was on the balls of my feet broke, almost about to be homeless."

He said that when he returned to L.A., Hanson called and asked to meet him at a park.

"He gets out of the car, he goes to the trunk, and he gets a shovel and a Mexican wrestler mask," Portley-Hanks recalled.

Hanson posed with the shovel while the private investigator snapped photos of him. Portley-Hanks said Hanson then asked him to photo-shop a photo of Hanson with the mask next to the paint-splattered grave, along with a death threat.

"When he desecrated my mother's grave that was it," said Individual A, who soon after went to the FBI.
During our interview in the courtyard of the Fairmont Miramar Hotel, Portley-Hanks showed up to ask Individual A for forgiveness for his role in the Hanson case.

When Individual A shook his hand, Portley-Hanks broke down in tears.

"I'm so sorry. I'm so sorry," he said. "I would never want anybody to do that to me. I just want to see that man [Hanson] locked up forever."

Now Individual A is pushing to make sure Shockey is fully investigated and recently began a testy phone and text exchange with the formal football star that he shared with Local 10 News.

In one text, Shockey, while saying he had no knowledge of any crimes, told Individual A that he believed the case against Hanson was "s--t" and that what had occurred in Individual A's case was "minor."

Individual A said he called Shockey in January, which is when he said Shockey revealed he had been contacted by the FBI. He said Shockey called him the day before Easter.

"I'm the one who put one of his best friends in jail," Individual A said. "Why are you calling me? ... He wanted to get Owen Hanson out of jail. I said, 'Jeremy, he ain't getting out of jail, period.'" 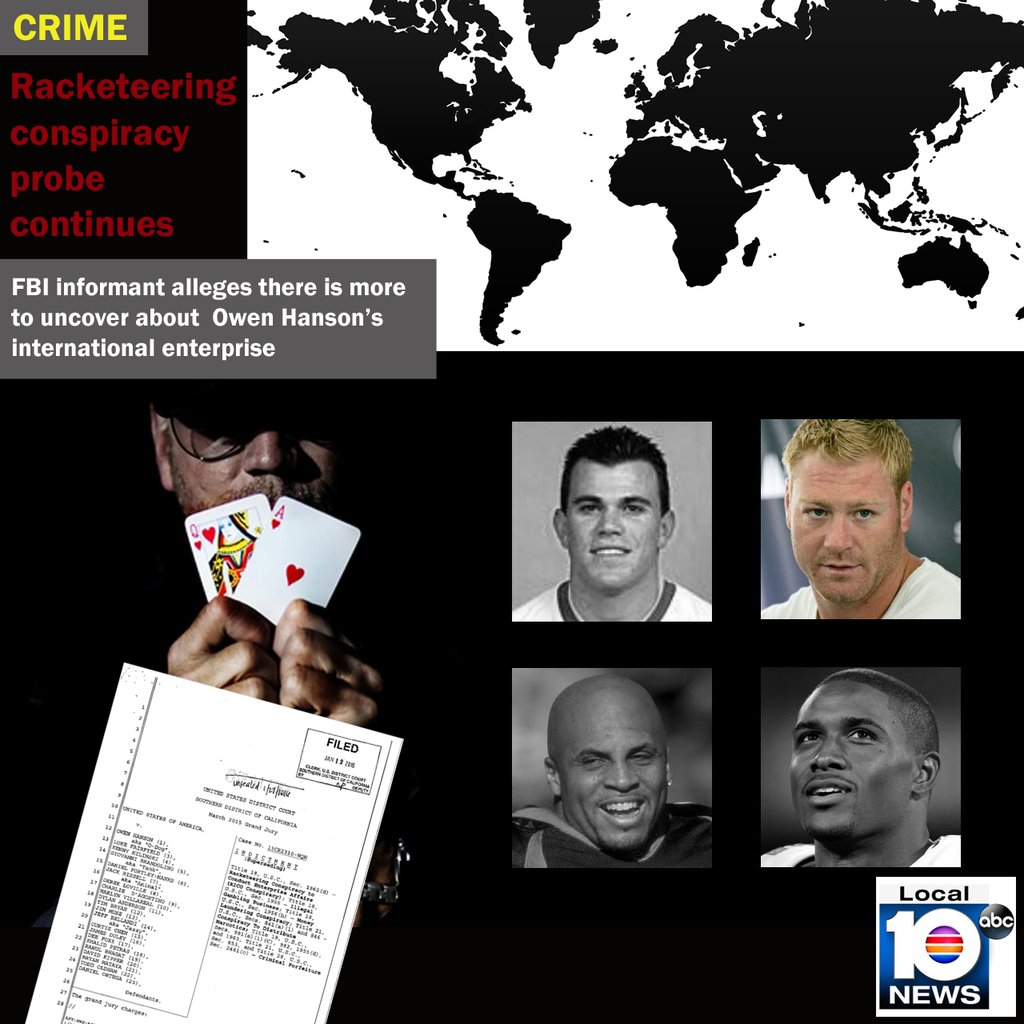