FORT LAUDERDALE, Fla. – Comedian Eddie Murphy's ex-wife, Nicole Murphy, is not giving up on the $7 million that she lost when she gave a man whom she had known since she was a teenager access to her personal finances -- including real estate and jewelry.

After Murphy got her $15 million settlement, Troy Stratos contacted her. They met when they were teens. Stratos told her that he was an AOL seed investor who had reinvested in oil. He promised to help her increase her wealth.

But he did the opposite.

Murphy believes that Richard Chamberlain, better known as Richard Hack, was involved in the scheme to defraud her. The Fort Lauderdale-based author said he did nothing wrong. He also did not suspect that Stratos was up to no good, he said.

"According to him, he was self-funded," Hack said. "The amount of money that was being spent seemed excessive, but he was excessive."

Authorities later learned that Stratos also used other names: Troy David, David Stafford, David Burton and Ken Dennis. What he did while he pretended to be Dennis sent him to prison in Sacramento County. A federal jury found him guilty of four counts of wire fraud and two counts of money laundering.

The California criminal case in Murphy's alleged fraud is next. Murphy also has pending civil litigation in Broward County.

Murphy's first effort to try to get her money back failed. She hired private investigator Bill Branscum, a former special agent who worked with the FBI's organized crime strike force in Miami. Branscum, who has an office in Naples, followed Stratos' trail from Fort Lauderdale to Los Angeles, Vancouver and Paris.

Branscum found a Realtor in the Hawaiian island of Maui who said he gave Stratos $1.9 million for an investment that never happened. He found women in Vancouver who gave Stratos at least $16 million. He found men who said they were his lovers and victims of his scams.

Those who know him "paint a picture of an intelligent and charismatic, but terribly conflicted, sociopath," Branscum said in a report that he presented to Murphy about Stratos.

A professional gambler and philanthropist known as Robin Hood 702 said Stratos used the money he stole to feed his gambling problem. Stratos owed him money. He said Branscum showed up to mediate a meeting between him and Stratos in Las Vegas. Branscum told him he was now working for Stratos.

"Nicole really trusted Mr. Branscum, and he totally betrayed her trust in every way," said the professional gambler, who is friends with Murphy.

Vincent Parco, a private investigator known nationwide, said it is unethical to work for someone whom he has worked against in the past without the previous client's permission. In Florida, the law protects the client's confidentiality. Branscum said he didn't do anything wrong.

"It was for two completely different situations. She hired me for the problem she was having with Troy Stratos," Branscum said. "Troy Stratos contacted me for something else. It was about extortion. I would have been conflicted if there had been any crossover. But there wasn't."

Murphy believes that the betrayal extends to a Bank of America executive in Fort Lauderdale, who has since retired, and others whom she trusted. Her lawsuit in Broward County holds Bank of America and Hack partially responsible.

"I was kind enough to assist him and her, because I was in Florida and they were not," said Hack, who works for Florida Agenda, a newspaper that covers the  lesbian, gay, bisexual and transgender community. "I wasn't getting paid. I lost money on this. I did a lot of work that I didn't get paid for."

Hack said he is convinced that the bank's attorneys -- who refer to the conspiracy allegations as a "wild accusation" -- will get the case dismissed. A similar case that Murphy filed against Hack, Stratos and Bank of America was dismissed in California five years ago.

Murphy's attorney, James McClendon Williams, said Murphy has plenty of evidence. It includes a signed bank form that, unbeknownst to Murphy, had different terms than those of the legal trust that her lawyer had set up. Broward County Judge Carol-Lisa Phillips has the case.

"They opened a trust account that required two signatures to every transaction, but the bank only wanted it to be a one-signature account," Williams said.

Williams said the bank treated Stratos like a well-known client when he wasn't. That doesn't surprise Hack. Stratos is "a smooth talker," he said.

Hack knew him as a producer. He believed that he was capable of turning his screenplays into movies. Hack said that motivated him to write presentations and news releases. It prompted him to travel to Cairo and to act as an agent in Florida for both Murphy and Stratos. He still doesn't believe with certainty that Stratos is a con man, he said.

The extravagant projects never happened because, according to federal prosecutors, Stratos spent every penny he touched. 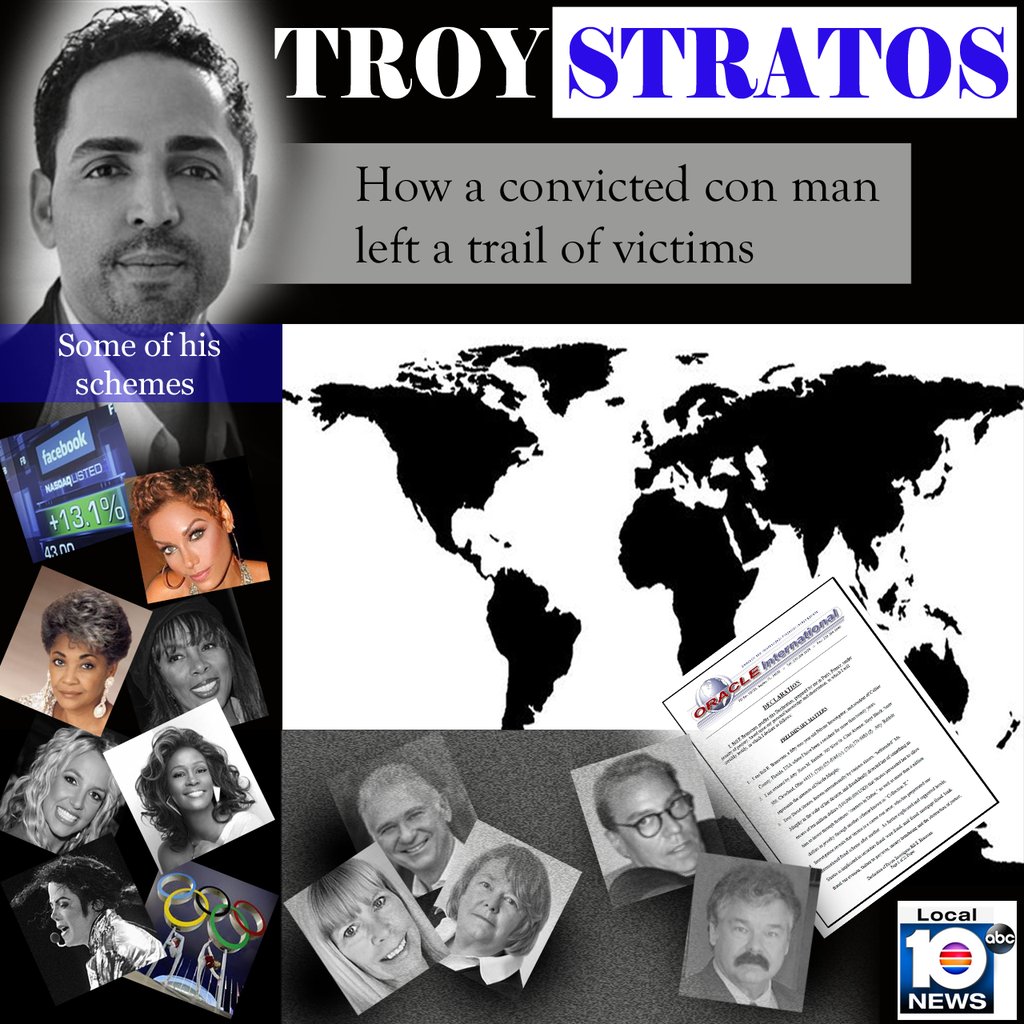