THE LATEST: Coronavirus numbers in my city: Broward, Miami-Dade counties

Coronavirus in Florida: 12,350 cases, with more than half in South Florida

After peaceful #NotMyPresident protest in Miami, 1 shot in Oregon

As protests of President-elect Donald Trump entered another day, a peaceful protest took place in downtown Miami. But in Portland, Oregon, police say a man was shot after a confrontation with a protester.

Portland police said the person who was shot was taken to a hospital for treatment of injuries that were not life-threatening. Police said they were looking for the shooter, who apparently fled in his vehicle after the attack early Saturday morning on a Willamette River bridge.

Authorities reported instances of vandalism and assault during a rally that organizers had billed as peaceful earlier in the day. After the peaceful protest in Miami, officials in the City of Fort Lauderdale was preparing for a protest on Sunday night.

In other parts of the country, spirited demonstrations on college campuses and peaceful marches along downtown streets have taken place since Wednesday. There was a protest at the University of Miami on Friday.

Leslie Holmes, 65, a website developer from Wilton, Connecticut, took an hour-long train ride to the demonstration — her first protest since the 1970s, when she hit the streets of San Francisco to oppose the Vietnam War.

She described herself as an armchair liberal but declared, "I'm not going to be armchair anymore."

"I don't want to live in a country where my friends aren't included, and my friends are fearful, and my children are going to grow up in a world that's frightening, and my granddaughters can look forward to being excluded from jobs and politics and fulfilling their potential, so I'm here for them," she said.

Trump supporter Nicolas Quirico was traveling from South Beach to Miami. His car was among hundreds stopped when protesters blocked Interstate 395.

"Trump will be our president. There is no way around that, and the sooner people grasp that, the better off we will be," he said. "There is a difference between a peaceful protest and standing in a major highway backing up traffic for 5 miles. This is wrong."

More than a thousand protesters took to the streets across California after night fell including downtown Los Angeles, where over 200 were arrested a night earlier. In Bakersfield, where Trump is far more popular than in most of the state, some held signs reading "Anti-Trump, Pro-USA."

More than 200 people, carrying signs gathered on the steps of the Washington state Capitol. The group chanted "not my president" and "no Trump, no KKK, no fascist USA."

Nadia Gavino, 25, learned about the rallies on Twitter and protested Thursday evening. Gavino, whose father is from Peru and whose mother is of Mexican and Lithuanian heritage, said she took Trump's harshest statements about immigrants and Latinos personally.

"I obviously agree that he's racist, he's sexist, he's phobic, he's misogynistic. He's all these things you don't want in a leader," she said.

"I have a leader I fear for the first time in my life," said Nagel, a Bernie Sanders supporter who voted for Hillary Clinton.

"It's not that we're sore losers," she said. "It's that we are genuinely upset, angry, terrified that a platform based off of racism, xenophobia and homophobia has become so powerful and now has complete control of our representation."

Demonstrations also took place internationally. About 300 people protested Trump's election as the next American president outside the U.S. Embassy near the landmark Brandenburg Gate in Berlin.

President Barack Obama meets in Berlin next week with Chancellor Angela Merkel and several other European leaders, and is expected to confront global concerns about Trump's election.

Demonstrations also were planned Saturday in Las Vegas, Los Angeles and other areas.

Previous demonstrations drew thousands of people in New York and other large urban centers. The largely peaceful demonstrations were overshadowed by sporadic episodes of vandalism, violence and street-blocking. 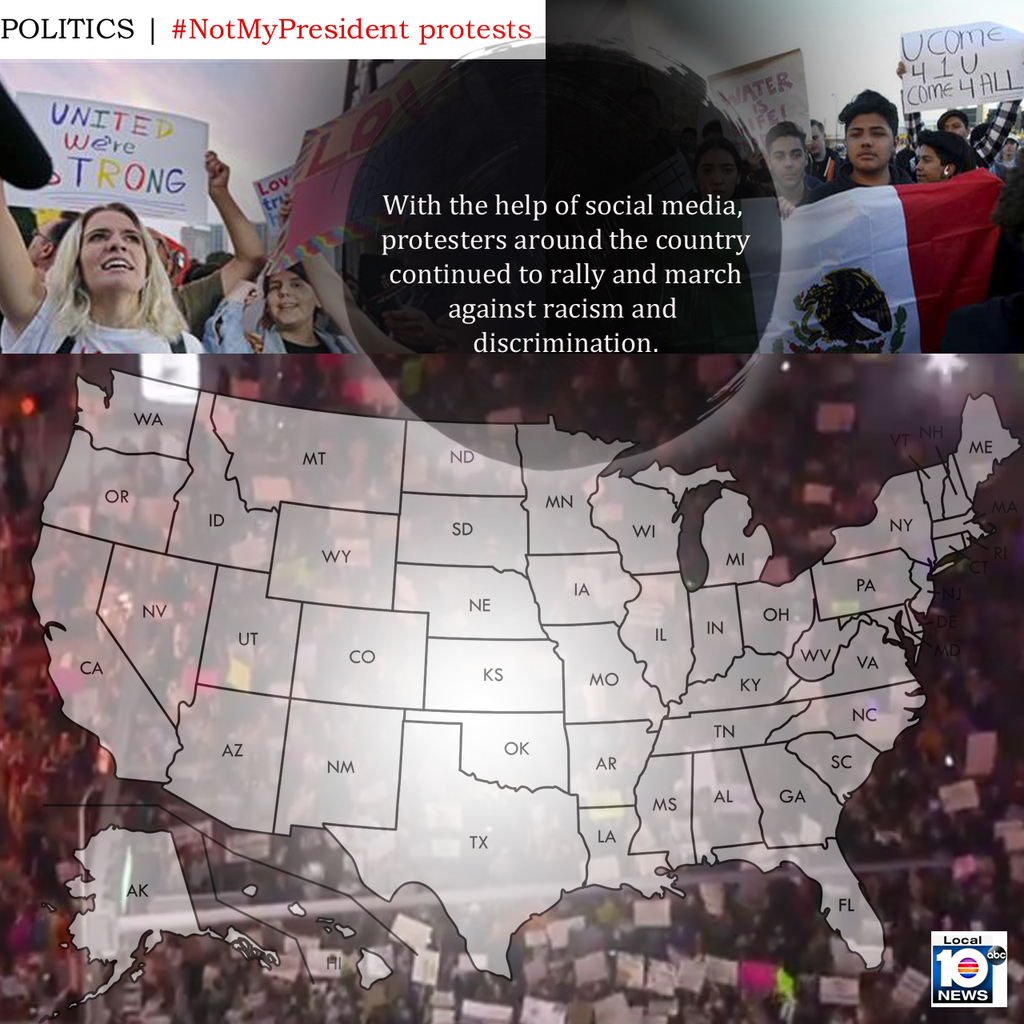