MIAMI GARDENS, Fla. – U.S. Army Special Forces Sgt. La David Johnson, a father of two who was formerly known by thousands on social media as the "Wheelie King 305," was among the four U.S. soldiers who died this week while fighting jihadists in remote Francophone West Africa, according to the Department of Defense. He was 25.

Johnson, affectionately known as "Tee" at Miami Carol City Senior High School, graduated from ATI Career Training Center. His mother's death shaped him. He was a gym and church regular who believed in hard work. Aside from his love of cycling, his friends also remembered his love of cars and his commitment to being a reliable father and husband. He even tattooed his wife's name on his chest.

The same determination that made him ride his one-wheel bicycle from his home in Miami Gardens to the Walmart where he worked in Pembroke Pines years later took him to score high on U.S. Army tests. He pushed himself and was assigned to a 3rd Special Forces Group, a Green Beret unit. He was a special operations soldier, but not a Green Beret.

"My brother stood for something," Angela Ghent, his half-sister, wrote. "He fought for this country and that's how he will be remembered."

Johnson, the nephew of a disciplined waste-collector and football coach who stayed away from alcohol and became his paternal figure when his aunt adopted him, enlisted in the Army in January 2014. He went from serving as a wheeled-vehicle mechanic to becoming a promising member of the 3rd Special Forces Group, headquartered in Fort Bragg, North Carolina.

"The Bush Hog formation [his battalion] was made better because of Johnson's faithful service and we are focused on caring for the Johnson family during this difficult period," Lt. Col. David Painter, commander of 2nd Battalion, 3rd Special Forces Group said.

Johnson was shot dead in the West African Republic of Niger, the DOD reported Saturday. He was working in the landlocked country's southwest volatile area of Tongo Tongo. The DOD reported there is an ongoing investigation of the incident, which involved the use of an unarmored truck, lack of air cover and questions about how Johnson was inadvertently left behind in the desert during the evacuation.

According to a U.S. official who talked to CNN, Johnson was leaving a meeting in an unarmored pickup truck Wednesday when enemy fighters targeted him and his team with rocket-propelled grenades and machine guns. Johnson likely got separated when they all got off the unarmored trucks to run for cover and return fire.

During the firefight, U.S. troops called in French fighter jets. According to Reuters' sources the French responded but circled overhead without firing, because the enemy was too close to the U.S.-Nigerien patrol. Reuters also reported the incident upset French officials over the U.S. military's lack of contingency plans.

"The threats at the time were deemed to be unlikely, so there was no overhead armed air cover during the engagement," U.S. Army Col. Mark Cheadle, a spokesman for Africa Command said during a news conference.

"We had everything, jets, rotary wings, ISR (Intelligence, Surveillance and Reconnaissance), various platforms, human intelligence, signals intelligence -- you name it," Cheadle said. "There was a full-court press by all of the DOD, the Nigerien government, the Department of State and the French to help us recover our lost one."

The DOD believes Dondou Chefou, a lieutenant of the Islamic State in the Greater Sahara, led the jihadists who killed Johnson, Reuters reported. The counter-terrorism team was part of a mission to disrupt an ISIS gold mining "rat line," a black market that represents an important source of funding, a senior U.S. official told NBC News.

"We are resolved and stalwart in our efforts to go after those who attacked," Cheadle said.

The incident is the third U.S. military tragedy in Africa since "Black Hawk Down," a disastrous raid in the Somali capital Mogadishu in 1993. U.S. Navy Seal Kyle Millken, a 38-year-old senior chief petty officer member of SEAL Team 6, died in a raid in Somalia in May.

Gov. Rick Scott issued a statement Saturday afternoon saying he joined Floridians in honoring the lives of Johnson and the other three U.S. soldiers.

"We will never forget their heroic actions," Scott said, "and our hearts break for their families and loved ones." 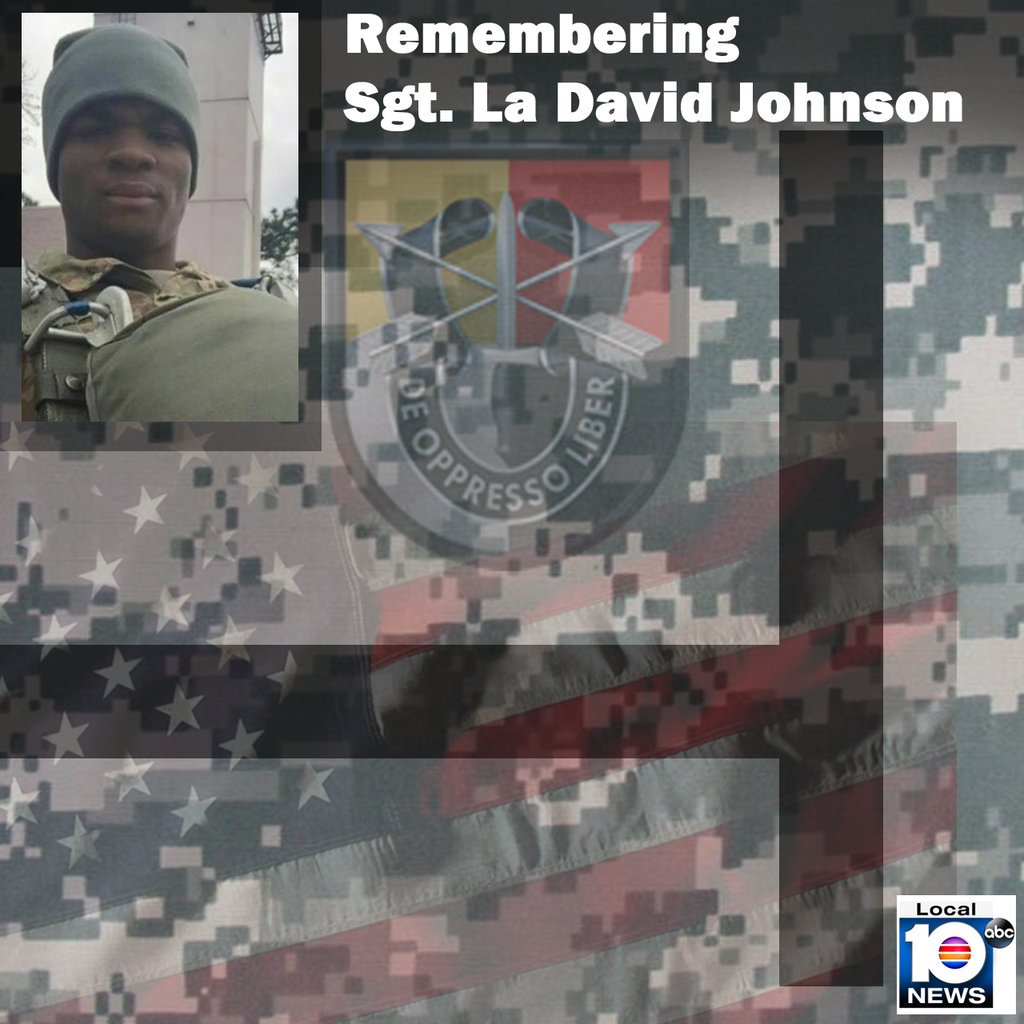