HAVANA – Victor Manuel Dueñas hugged his mom, his partner and his partner's mother at the Jose Marti International Airport in Havana on Saturday. The 23-year-old human rights activist boarded a flight to Russia heartbroken but hopeful.

The flight to Moscow had a layover at the Amsterdam Airport Schiphol where Dueñas, his cousin Onasis Torres, who is gay, and five others remained Monday night waiting for authorities from the Netherlands to respond to their request for asylum.

Many other Cubans used the Havana-Russia flight's layover in Amsterdam to request asylum in the European Union before Dueñas and his group. He estimates hundreds of Cubans made it to Europe this way before authorities took notice.

"Some of them passed through Amsterdam and after spending time in a camp, they went to France, Germany and Spain," Dueñas said in Spanish.

After the U.S. started to deport Cubans last year, activists say young Cubans continue to leave the island in search of opportunities and freedom, but their migratory routes have changed. They are looking for ways to make it to Europe.

Dueñas, who advocates for freedom of speech and the rights of the lesbian, gay, bisexual, and transgender community, didn't have a lot of time to think about his decision to leave the Communist island. When authorities from the Netherlands noticed the spike in Cuban asylum requests, they decided to implement a new airport transit visa requirement starting Monday to dissuade more Cubans from landing exiting the airport.

"We are the last ones who were able to arrive here to the airport in Amsterdam," he said. "There are some here who have been here for five days waiting for diplomatic officials."

Dueñas first caught the attention of Cuban authorities when he opened the Centro Comunitario de Cultura, a meeting place for advocates of human rights for the LGBTQ community, from his family's house in Santo Domingo, a municipality in the province of Villa Clara. Hurricane Irma damaged the home Sept. 9.

Dueñas was already on their radar. He had worked for as a contributor for the Havana Times, an independent digital magazine founded in 2008 that promotes a diversity of opinion. The publication's editor claims some of their contributors have been blacklisted and are no longer able to work for the state.

Although Cuba has made great strides from the days Fidel Castro jailed gay men, Dueñas said there is no freedom for the LGBTQ community on the island. Cuban President Raul Castro's daughter, Mariela Castro, an activist for LGBTQ rights in Cuba, continues to push for improvements in education and the legalization of same-sex marriage.

The Cuban government's healthcare system offers treatment for those who are diagnosed as transsexual and cover the cost of sex reassignment surgery.  When the access started in 2011, Belgium assisted with specialists and financing.

Dueñas believes his work in support of the Nosotros Tambien Amamos, or We Also Love, an independent campaign lobbying for the rights of the LGBTQ community upset Cuban authorities. He said police officers treat him and his friends as sex workers when they meet in groups.

While at the Amsterdam airport Monday night, Dueñas was worried about having access to food and a restroom to take a shower. The thought of getting deported back to Cuba and ending up in a prison terrified him. He was ready to go to a camp in the Netherlands where he was likely to run into migrants from Venezuela and Haiti. They are also among the largest minorities requesting asylum in the European Union. 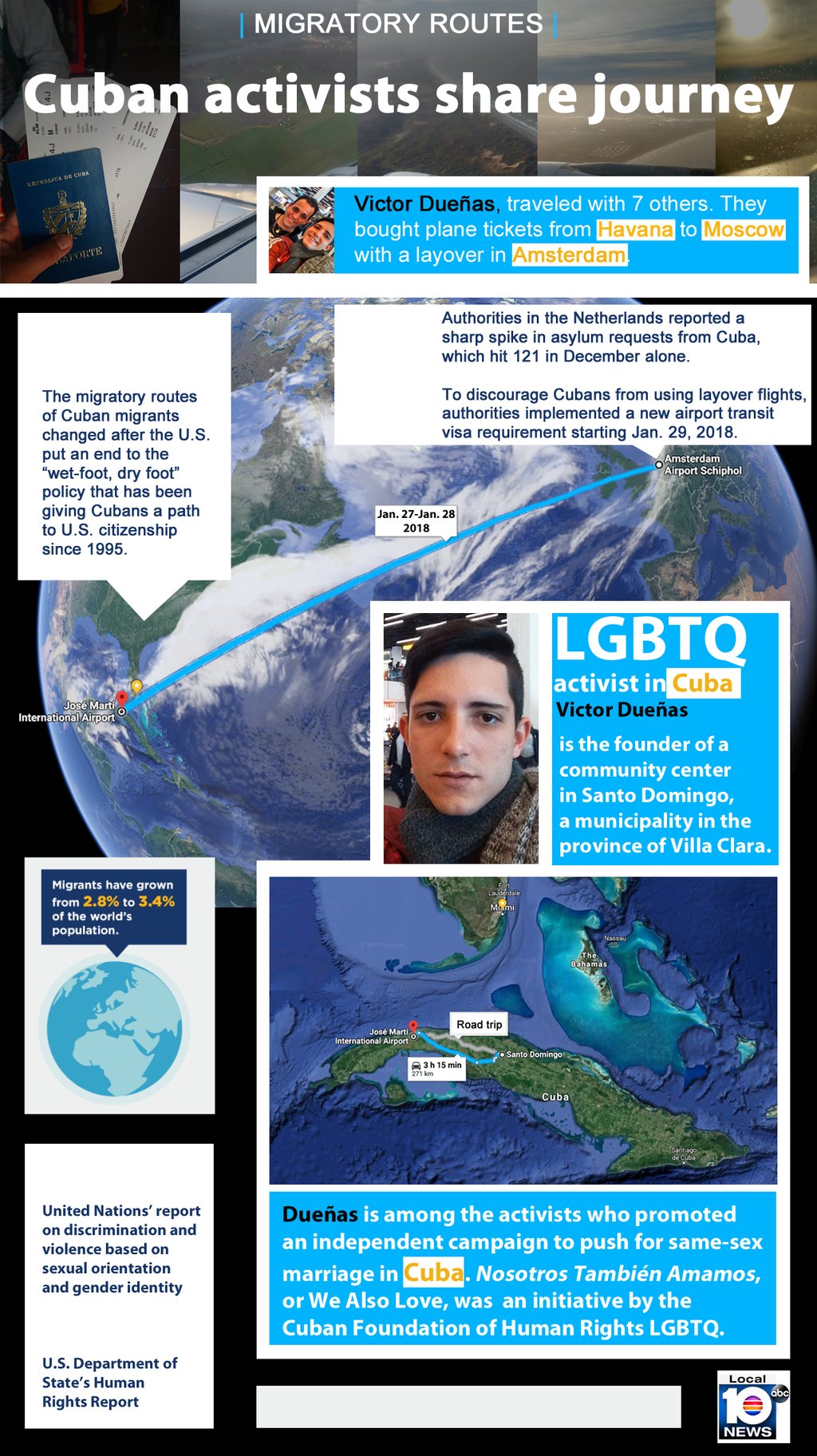