1 airlifted to hospital after shooting in Miami Gardens, police say

1 dead, 2 hospitalized after shooting in Homestead

MIAMI-DADE COUNTY, Fla. – Neighbors living in Miami-Dade County's Glenvar Heights community compare it to a real-life version of the movie "Neighbors," in which a suburban family's peaceful street is invaded by a fraternity house. Except people living here said this is their reality.

Cruz told Local 10 News investigative reporter Amy Viteri the neighborhood has become in many ways an extension of the University of Miami campus.

"At the moment there's, I believe, 15 UM students living there. They all belong to a fraternity," she said, referring to a large home in the 5500 block of Southwest 67th Avenue.

Cruz said a handful of developers have bought up properties and some are building large multi-bedroom homes that are essentially off-campus dorms. 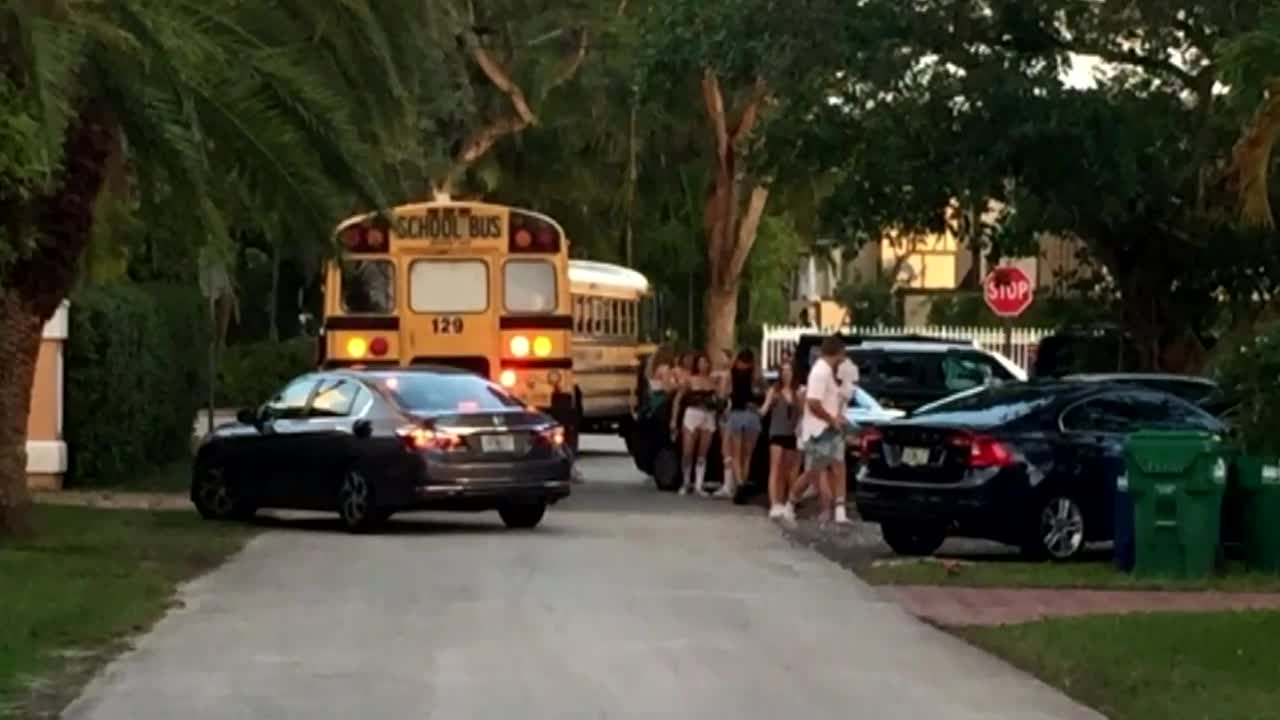 According to neighbors, there are several similar student rentals nearby, with various owners.

Photographs show cars parked haphazardly in yards and on the street, trash piles attracting rodents and even portable bathrooms in one yard.

Police have been called to at least one of the homes several times, and Local 10 found several noise violation citations have been issued and paid.

Cruz and other neighbors have joined together to hire an attorney. They have sent petitions to the county and written letters expressing their frustrations.

She said renters have pushed back.

"One of the neighbors was actually approached by the students and they kind of threatened him and said, 'Stop taking pictures. Our landlord is well-connected with the county and nothing is going to happen to him,'" Cruz said.

The home on Southwest 67th Avenue is owned by Julio Del Rey. He and his brother, Jorge Del Rey, own several properties in the area and the family is also politically connected. Their sister, Marcia Del Rey, is a Miami-Dade County judge.

District 7 Commissioner Xavier Suarez told Viteri there is no special treatment in this case.

"We're not influenced by any powerful person," Suarez said.

Local 10 learned the Del Rey brothers contributed $10,000 each to the campaign of the commissioner's son, Francis Suarez, who was since elected mayor of Miami.

Commissioner Suarez told Viteri he was not aware of any contributions and said the county has taken action.

In February, the county sent a cease-and-desist letter to Julio Del Rey threatening a lawsuit, saying the home, which has 15 tenants, violates single family residential zoning. An attorney for the Del Rey's pushed back, saying the county has never defined the term "one-family residence." 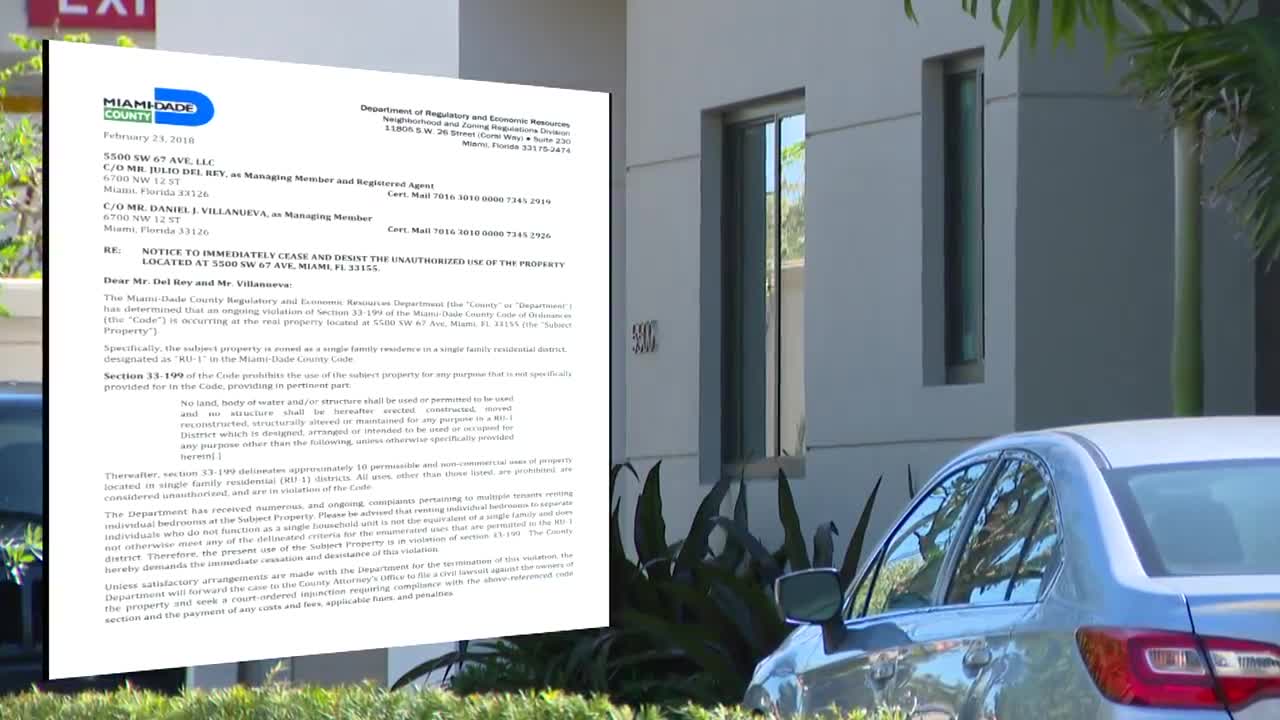 "People should have the expectation if they move into a residential neighborhood that they're not going to have frat houses next to their home," Commissioner Suarez said.

Local 10 contacted Julio Del Rey by phone, and he declined an on-camera interview.

His attorney, Angel Ruiz, sent a statement, which read, in part, that the house "was legally built and legally leased to the current tenants. ... Please note the honorable Marcia Del Rey has no ownership or stake in this property." 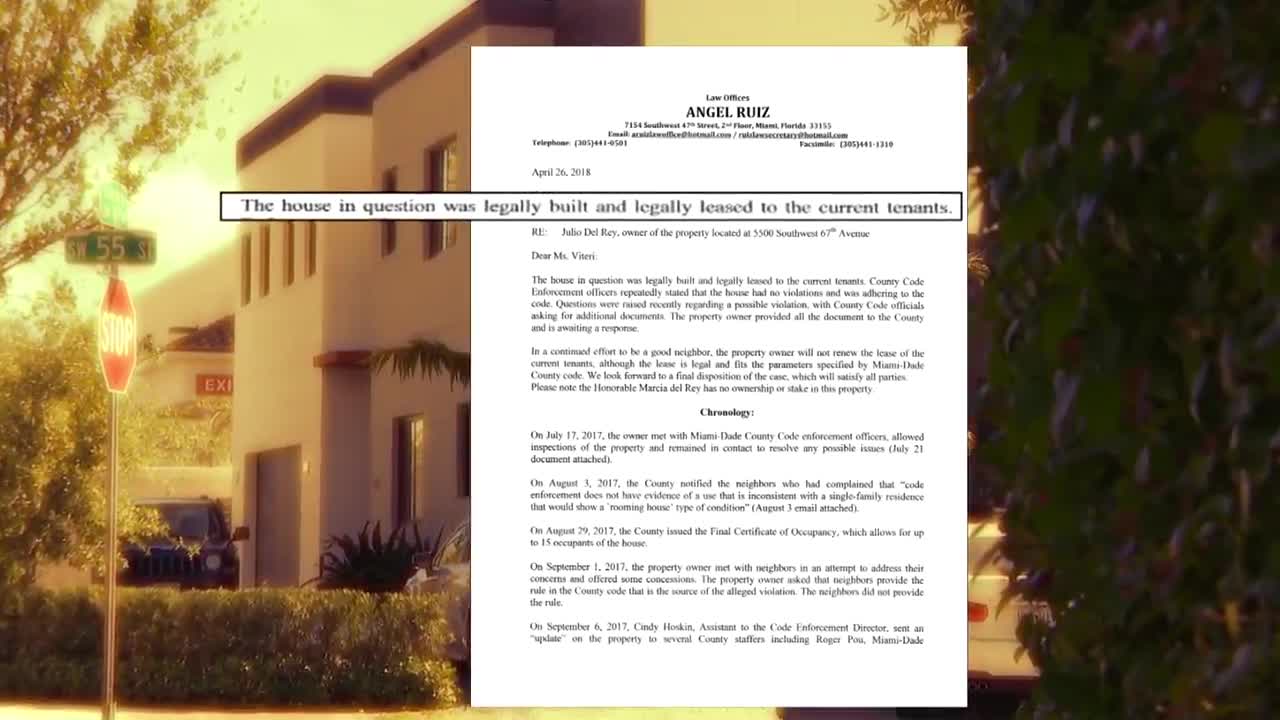 The statement also said Julio Del Rey has now decided not to renew the lease of the current tenants in an effort to be a good neighbor.

Neighbors still had concerns about other properties owned by the Del Rey family, like a seven-bedroom, seven-bathroom home currently being built in South Miami and plans to build on an empty lot across from Cruz's home, where she said Jorge Del Rey originally planned to build an 11-bedroom, 11-bathroom home.

A representative for the family told Viteri the family now plans to sell the home being built in South Miami. They have downsized their plans to build on the empty lot across from Jessica Cruz.

South Miami resident Theresa Galivan said some of her neighbors already have plans to move, in an effort to avoid problems like those in neighboring Glenvar Heights.

"It's definitely wrong," she said. "This is a residential community, a quiet neighborhood."

The lease for the home on Southwest 67th Avenue is up in June. It was not immediately clear what is next for the property once the students move out.