Handful of protesters show up at Florida State Capitol; security still stepped up

UF freshman from Miami dies after being struck by a car

$43,000 in school board parking cash vanished

FORT LAUDERDALE, Fla. – When a recent audit by the school board of Broward County found that $43,000 in parking cash seemingly vanished in 2015, it zeroed in on what many would consider an unlikely suspect: A 59-year-old grandmother who'd been quietly working at the school board for three decades as a secretary and operations specialist.

Auditors reported that of $56,794 in cash that was removed from the two meters at the public parking at the K.C. Wright Administration Building, only $13,690 was actually deposited into the bank, leaving a little more than $43,000 missing. Auditors reported that just one person was "responsible for collecting the money, depositing the money, and monitoring all parking operations" -- longtime employee Bette Ray, who retired in 2016.

When asked what happened to the money during the audit investigation, Ray "stated she had no explanation regarding the missing funds," according to the audit report. What happened to that money remains a mystery today, with the Broward Sheriff's Office and state prosecutors continuing an active criminal investigation into the alleged theft.

Local 10 News recently caught up with Ray at her Davie home.

"I've retained an attorney, and the truth will come out," she said.

But she refused to tell her story. When Local 10 News investigative reporter Bob Norman noted that she was the only one controlling the money, she countered that four other people were also overseeing the money. Ray didn't say who she was talking about, but the audit report notes that a "security specialist," accompanied by a manager, delivered the canister containing the cash to Ray. Auditors noted, however, that only Ray had the keys to open the canisters.

The audit also noted that on days when Ray wasn't at work, her replacement noted that the security specialist, who wasn't named in the report, did have the key. That wasn't explained further.

The security specialist claimed that he would accompany Ray to deposit the parking cash at the Bright Star Credit Union, which is located in the school board building. But that didn't make sense because the school board account was at Bank of America, not Bright Star.

"We determined that the Bright Star Credit Union offers the service of processing transactions for other credit union accounts held by individuals," wrote the auditors. "We noted that [Ray] had accounts with two other credit unions. We question why deposits were being made at the Bright Star Credit Union, when the district’s account is with Bank of America." 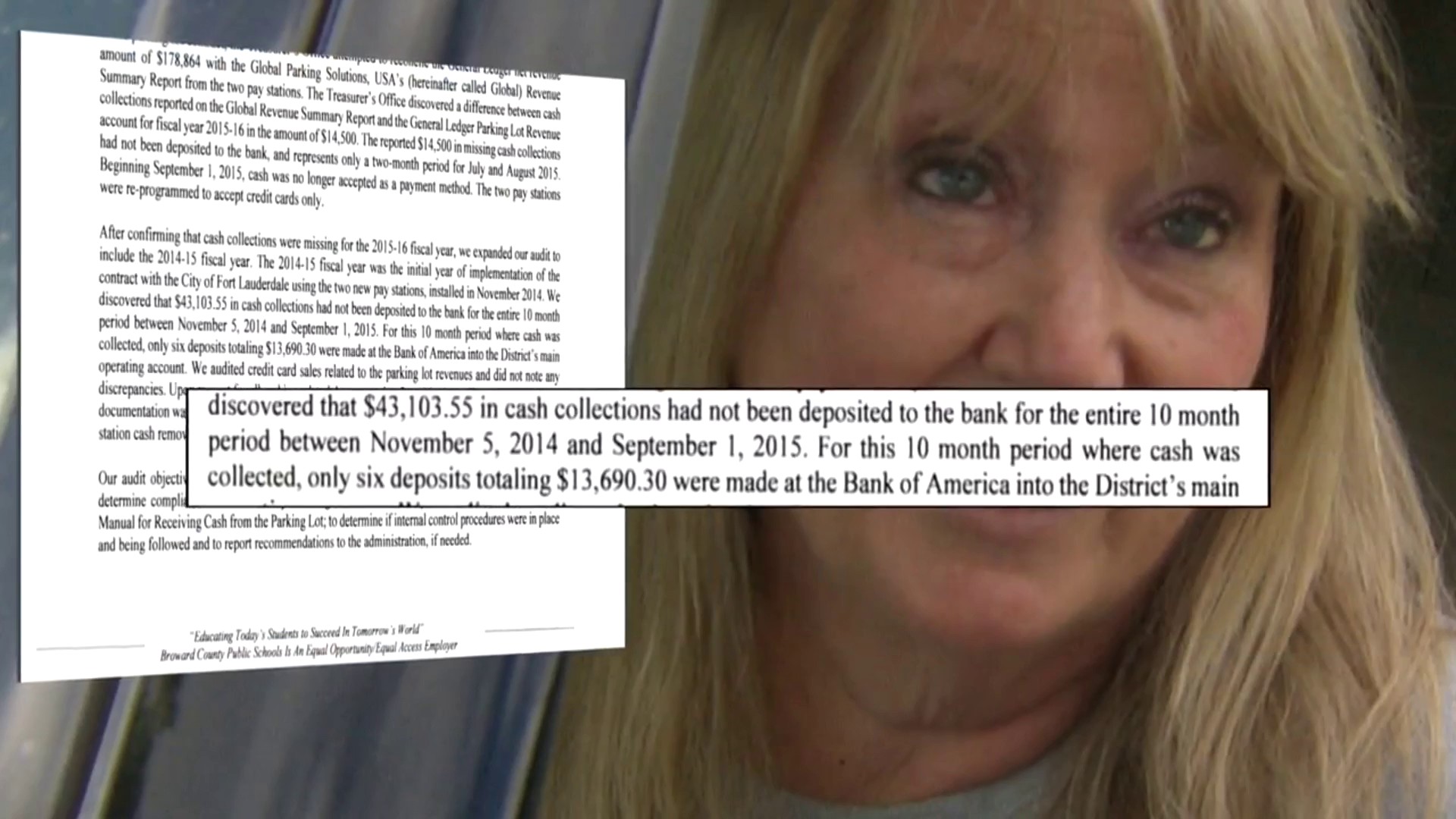 Ray also made a recommendation to end the practice of accepting cash in the parking lot meters in late 2015. She told auditors that the suggestion came from former Broward County schools police Chief Anthony Williams, according to the report. But when auditors questioned Williams about it, he said he never made any such suggestion.

"In fact, he stated that he was not aware that his staff was even included in the cash collecting from the pay stations," the auditors noted. "He emphasized that he never made any statements regarding parking lot cash collections or operations related to parking lot revenues."

The criminal investigation has been ongoing since November with no charges. Broward County Public Schools Superintendent Robert Runcie admitted that regardless of what happened to the money, there weren't enough protections in place to safeguard it for the public.

"That has changed," he said.

He said as a result of the investigation, new protocols have been put in place regarding all cash handled at the school board.