Tropics should stay calm for a while

SWEETWATER, Fla. – At 11 years old, Félix Alejandro Maradiaga hugged his frightened mother good bye. She wanted to keep him away from the forceful recruitment of child soldiers in the mountains of the Jinotega province in northern Nicaragua.

Two super powers were supporting the opposing forces of a bloody civil war with no end in sight and there were occasional border clashes with Honduran troops. The rebels, known as the "contras," received aid from the United States, and the Sandinista counterinsurgency had help from the Soviets.

To save his life, his parents decided to trust human smugglers with his safety. It has been close to four decades after his journey to Miami. Maradiaga, who opponents of Nicaraguan President Daniel Ortega say is poised to become the next president of Nicaragua, still remembers the verbal abuse that he endured at an immigration center in Harlingen, Texas.

"There was an African-American woman who interrogated me for about an hour. She called me a liar. Over and over," Maradiaga, 41, said. "They accused me of bringing drugs and insulted me. They were trying to break me and my parents weren't there to defend me."

Nicaraguans in South Florida have noticed an uptick of student migrants this year in Miami-Dade County. With protests calling for Ortega's ouster in Nicaragua, a new wave of violent repression has killed more than 215 since the unrest began in mid-April, according to the Nicaraguan Pro-Human Rights Association. A 1-year-old boy was among the dead Saturday.

Knowing that Central American children are still risking it all to make it to safety in the United States continues to haunt Maradiaga. His treacherous journey as a little boy kept him homeless for about a year. Although a few women showed him kindness, the smugglers lacked compassion and a police officer stole his backpack in Tecun Uman, Guatemala.

"We had to pay as a group to move from one place to another, so if one didn't have the money, none of us could leave," Maradiaga said. "It got ugly at one point and they locked us in a room for about a week."

At the U.S.-Mexico border near the Mexican city of Rio Bravo, a gaunt smuggler ordered them to take off their clothes, put them in plastic bags and jump into a perilous river.  After he swam across the Rio Grande, he realized not everyone whom he had traveled with had made it to the other side. After some time in Texas and a home in Miami-Dade County, he found a family in Coral Gables.

"Seventh grade in public school was tough," Maradiaga said. "It didn't take long for me to experience the racial tensions. The Haitians hated the Cubans and the Cubans hated the Salvadorans. I submerged myself in music and played the flute. I had a teacher named Mrs. Compton who was really there for me."

In 1990, Violeta Chamorro, whom Ortega had threatened with a 35-year prison sentence for treason, became president of Nicaragua. With the U.S.-backed candidate in power, Maradiaga's parents brought him back home. He thrived in high school in Matagalpa and later graduated from the Keiser University-Latin American Campus in San Marcos.

With master's degrees in public administration from Harvard and renewable energy from the University of Barcelona, he became a Yale University world fellow, Forbes Magazine listed him as one of the 25 influential leaders in Central America and the World Economic Forum named him a Young Global Leader.

"I believe in public service. I am here to serve my country and, yes, fear is there, but it won't stop me. When the Catholic Church of Matagalpa trusted me to deliver letters to fighters who were hiding in the jungle, I hiked for days with these letters and I delivered them ... when you know that you are serving, fear is secondary," Maradiaga said.

During a recent visit to the campus of Florida International University near Sweetwater, also known as Little Managua for being the home of the largest concentration of Nicaraguans and Nicaraguan Americans in the United States, Maradiaga said he is walking around with a target on his back. He was with his wife, Berta Maradiaga, whom he met when she was a student competing  in a Ruben Dario poetry contest.

"Before we got married, he warned me that he was already married to Nicaragua," she said in Spanish about her husband's patriotism. "This has all been very difficult, but I know that to ask him to stay away from serving his country would be the equivalent of kidnapping him. When the students called him to ask him for help, because they were getting killed out there, he told me to put the contingency plan in place and walked out."

Before traveling to the U.S., Maradiaga was beaten when he joined the students who are taking the streets to protest Ortega's policies. In February, a few students protested restrictions to social media. But it was Ortega's social security reforms forcing grandparents to receive less and ordering workers to contribute more that turned into massive protests.

"Supporting him and is a balance, because we have a 4-year-old daughter we have to think about, but there are many parents making tremendous sacrifices," Berta Maradiaga said in Spanish. "What is happening in our country is painful. We feel the terrible pain of the mothers who are losing their sons."

During his visit, he scheduled a meeting with Sen. Marco Rubio. When Rubio rescheduled the meeting to talk to him about issuing sanctions to Ortega and his family for the human rights violations, Maradiaga was forced to reschedule his return flight to Managua. He didn't know then that Nicaraguan authorities were waiting for him at the airport with plans to use an obscure treason law to arrest him.

Ortega's administration held a press conference to accuse him of being the member of a gang involved in narcotrafficking and terrorism. Maradiaga said the accusations are absurd. The college professor, who is also the director of one of Central America’s leading think-tanks, said Ortega knows he is not a criminal.

"The press conference had a purpose. Ortega has sent a signal to every Sandinista fanatic," Maradiaga said. "He has told them that they have permission to kill me."

On his flight from Miami to Managua on Tuesday, Maradiaga read the Bible quietly and prayed. After he left the airport, he sent a video to his supporters in South Florida saying he was grateful for the help that he had received from the Inter-American Commission on Human Rights despite the accusations against him.

"There is still a great number of persecuted political activists, a large number of political prisoners," Maradiaga said. "The political persecution against me is small in comparison to the one many people are suffering in Nicaragua ... Thank you for your prayers. We are going to keep on working." 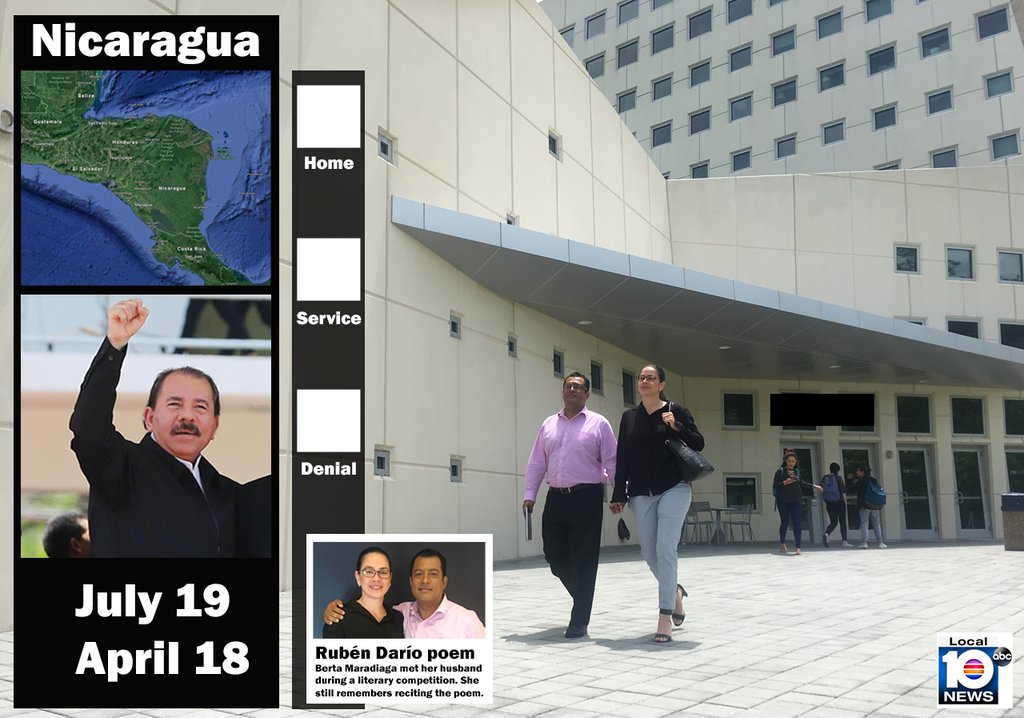 How to help Miami activists

Nicas Unidos en Miami is a new non-profit organization that has the support of a group of Venezuelan and Cuban exiles, and was founded as a response of the Nicaraguan government's oppressive actions against protesters this year. They want to provide food, medial assistance and legal aid to the victims and their families and set up a Pay Pal account.