Amid squalor and debris, Hurricane Michael's survivors cling to motel

PANAMA CITY, Fla. – Simply getting through the day is a struggle at the American Quality Lodge, a low-rent motel where dozens of people are living in squalor amid destruction left by Hurricane Michael.

Families huddle under makeshift tents and in breezeways strewn with broken glass and roofing fragments, seeking escape from Florida’s midday sun. They line up in a parking lot for food and water whenever volunteers and church groups stop by. There’s been no power in a week, and the water has been out for days.

Nighttime means relief from the heat, but also brings the threat of looters. Residents say people have stolen money, jewelry, food and even rain-soaked clothes from rooms ripped apart and left open to the elements by Michael.

“Basically, if you were living here before the storm you were homeless. This was our last resort,” said Jeannie Holcombe, who has been at the motel a few months with her husband, Jason. “It’s worse now.”

Michael’s winds of as much as 155 mph (250 kph) ripped much of the roof off the two-story red-brick motel, which is just miles from the white sands of Panama City Beach. Rain flooded the upper level and dripped down to the first floor. The place looks absolutely shattered, with tarps strung from the second-floor balcony providing some shade.

Rooms reek with the pungent smell of wet clothes and perspiration; windows are missing from many.

Long-term residents, who pay out about $180 a week per room, abandoned blown-out rooms for ones with fewer leaks or doors that will shut. Other people simply showed up from surrounding areas and settled in. Some asked permission, others didn’t.

Joe Donahue, who works for a company that was taking over management of the motel as Michael struck, has been driving store-to-store in search of supplies, including water and feminine products for the women. He said he doesn’t mind people staying there for now.

“I have no place to send them because everything is booked,” he said. “It’s a nightmare.”

Vicki and her husband Wes Allen are stuck at the 135-room motel with their three children, including 17-year-old Allison Allen, who is seven months pregnant. Someone pilfered $21 that was set aside for her unborn daughter, they said.

“It’s not like it’s a huge amount of money, but that would have been a couple outfits for her,” said Allison, whose twin sister Kristin is also at the motel along with their older brother, Wes Allen Jr.

Residents credit their father with risking his life to rescue 10 people during the worst of the storm, helping them leave rooms torn to shreds by the wind.

Four family members sometimes use wheelchairs because of back problems. The sidewalks and walkways littered with storm debris make it hard for them to get around. The grassy courtyard is filled with sticky tarpaper from the roof, shattered lumber, empty drink cans and bed linens blown outside by Michael.

After getting permission from the Holcombe couple, Bill Yourn resorted to salvaging pennies from the floors and drawers of their shattered rooms. He had to climb through a broken window and walk across a soggy floor littered with shards of glass and personal items like deodorant, hair care products and clothes.

“Life’s not great,” he said after eating lunch: a can of tuna scooped with a borrowed spoon.

The water came back on a couple of days ago, providing a morale boost, and utility crews are installing new power poles just across the street. But Donahue said the motel is so badly damaged, it wouldn’t be safe to turn on the power even if electricity were available.

Residents say police and firefighters have been by to make sure the people are safe, but these survivors say they didn’t bother to report any of the looting at the motel, because the first-responders seem so busy.

Someone from FEMA also visited, they said, but no one has offered them any better alternatives yet.

And so they sit, most without transportation and many without phones for communication, waiting for a fresh delivery of food and water. Some trade cigarettes for other items. One man filled an inflatable kiddie pool, shaped like a pirate ship, to provide a place for youngsters to play.

From her wheelchair, Vicki Allen considered their fate.

“Six days after Michael came through and tore up everything, we’re still here,” she said.

The hero of the American Quality Lodge, the man who plucked vulnerable residents to safety during Michael, chimed in.

“We can’t stay here like this too much longer,” said Wes Allen, 48. 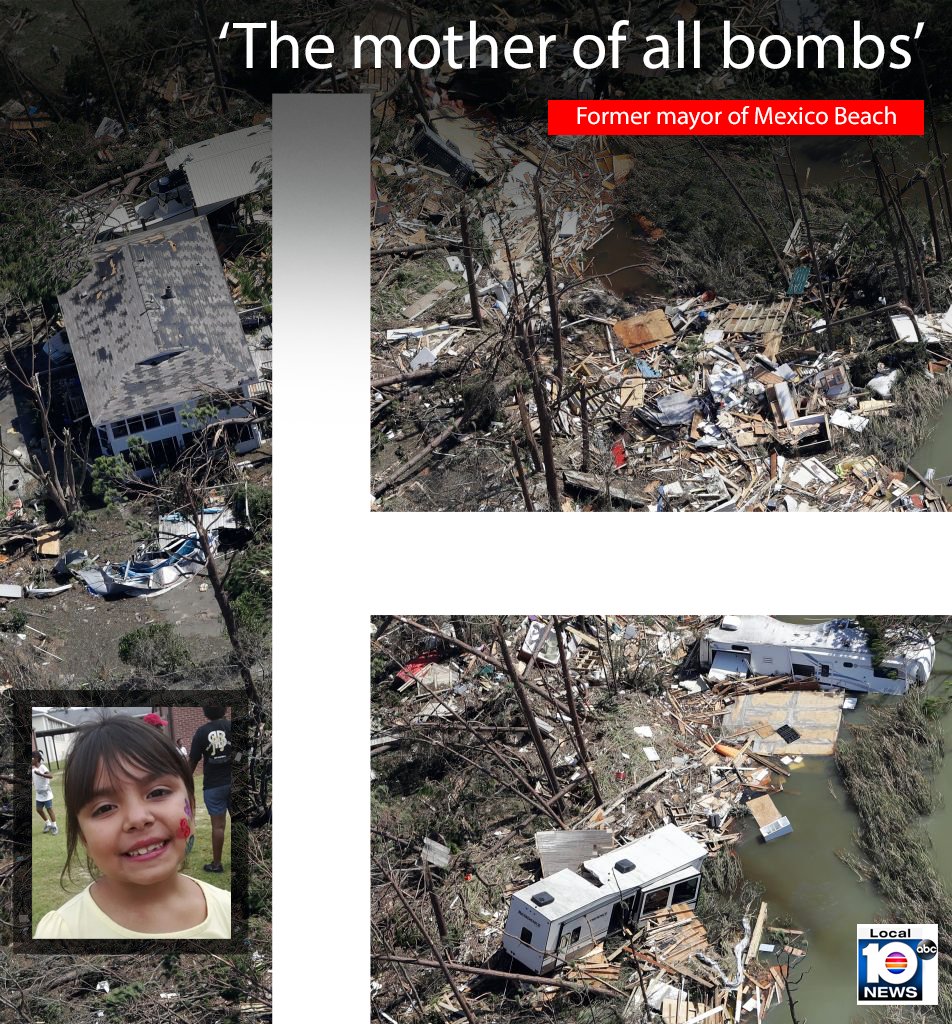