MIAMI – Miami Police Department Sgt. Roberto Destephan held a wooden box engraved with a Star of David, or the Shield of David, as it is known in Hebrew. It's the symbol of modern Jewish identity and Judaism.

Destephan, the vice president of the Miami Fraternal Order of Police, threw it on the bed of a pickup truck, as he used an expletive to describe it. He also held a copy of the Hebrew Bible, or the Tanakh, the source for the Christian Old Testament.

"This cr-p, fu-k  this," he said before throwing the sacred text. "Taking out the trash, dawg."

Two Brickell attorneys say Destephan recorded himself doing this and shared the video. Miami Police Chief Jorge Colina watched it appalled. There is an internal affairs' investigation of Destephan, who has been with the department for about 13 years, and has been suspended with pay.

"When you look at the video, what it appears is to be anti-Semitic speech and a desecration of the Torah," Colina said.

The Torah is the first five books of the 24 books of the Tanakh. Brickell attorneys John and Andrea Cunill agree with Colina and released the video to Local 10 News.

"I don't know how you can watch that video and your soul not be touched," said John Cunill, who focuses on municipal law with an emphasis on contract disputes. "Once viewing the video, we were really disturbed."

The Miami Fraternal Order of Police released a statement saying the "doctored video" was released as political "blackmail" to stop Destephan's re-election campaign.

The union's statement also said the video was shot years ago when Destephan was cleaning the union office and "the books were contaminated due to the mold and termites and needed to be discarded into the trash."

Colina said he wanted to reassure everyone in the Jewish community that the department is going to do what is right. He doesn't think the video is a distasteful joke.

"Hate in any form is unacceptable," Colina said. 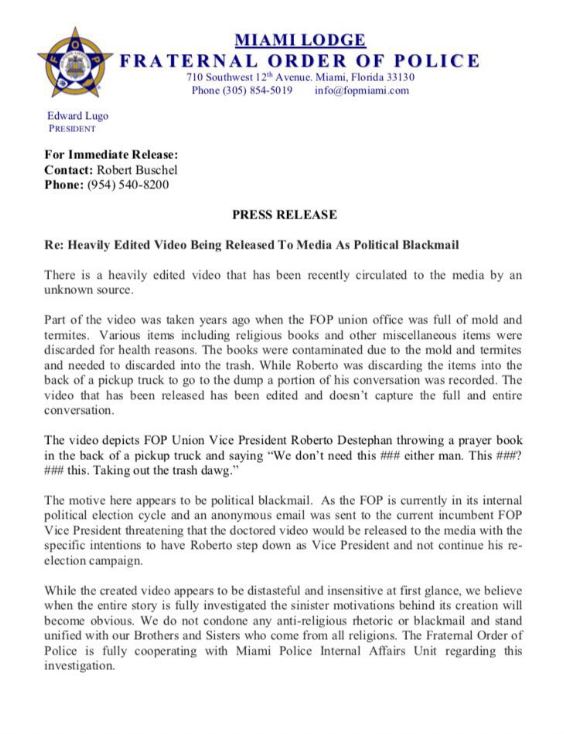