Seminoles look to add to legacy in Elite Eight

As the Seminoles prepare to play in their first Elite Eight since 1993, Local10.com reflects on the eight greatest moments in the history of the program. 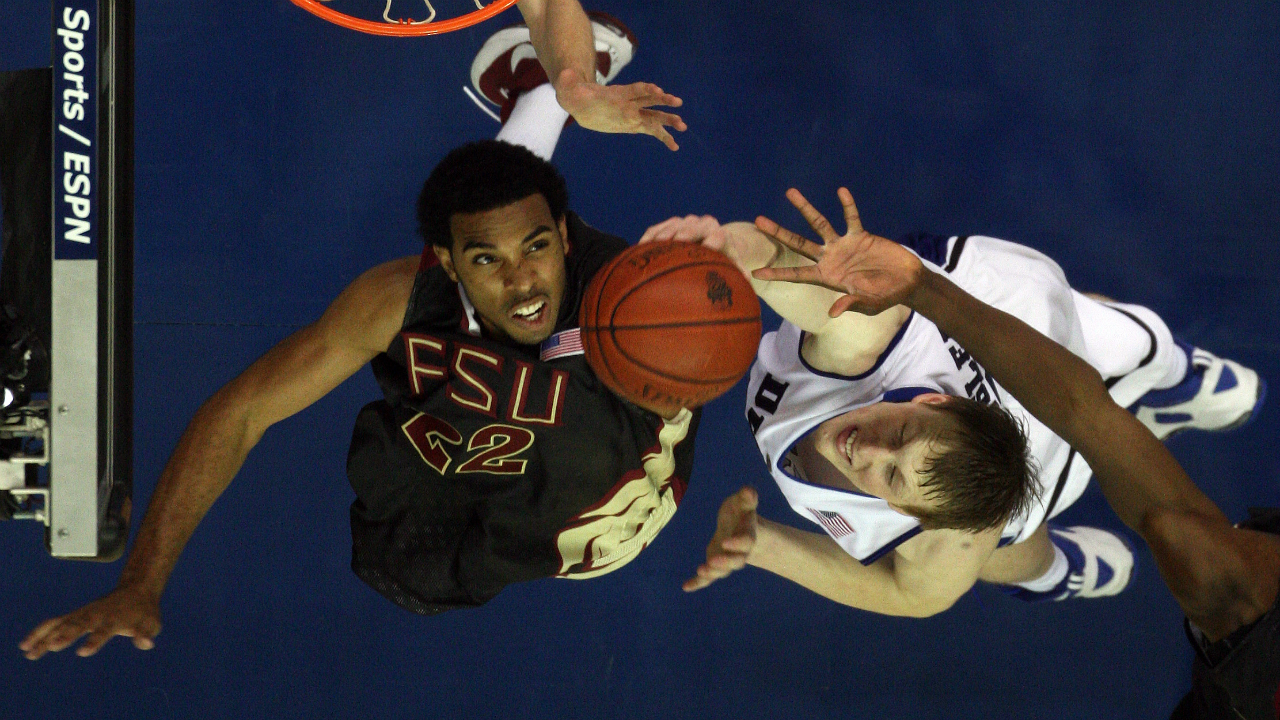 It took Florida State 18 seasons of Atlantic Coast Conference competition to get to the ACC Tournament championship game. The 22nd-ranked Seminoles finished 10-6 in ACC play, earning them the fourth seed in the tournament and a bye for the first time. Ninth-ranked Duke finished tied for second behind North Carolina during the season and earned the No. 3 seed in the tournament. Duke survived close calls against Boston College and Maryland, while FSU narrowly outlasted Georgia Tech and North Carolina to reach the championship game. The top-ranked Tar Heels had won the previous two ACC championships and claimed the 2009 regular-season title, but FSU pulled off the upset behind ACC defensive player of the year Toney Douglas, who scored 27 points in the 73-70 win. The victory catapulted the Seminoles to the title game, but the Blue Devils won 79-69, giving Duke its eighth conference title in 11 years. Despite the loss, Florida State proved it could play with the conference's best, although it would be four more years before the Seminoles would take home a trophy.

Florida State wins four in a row against Gators 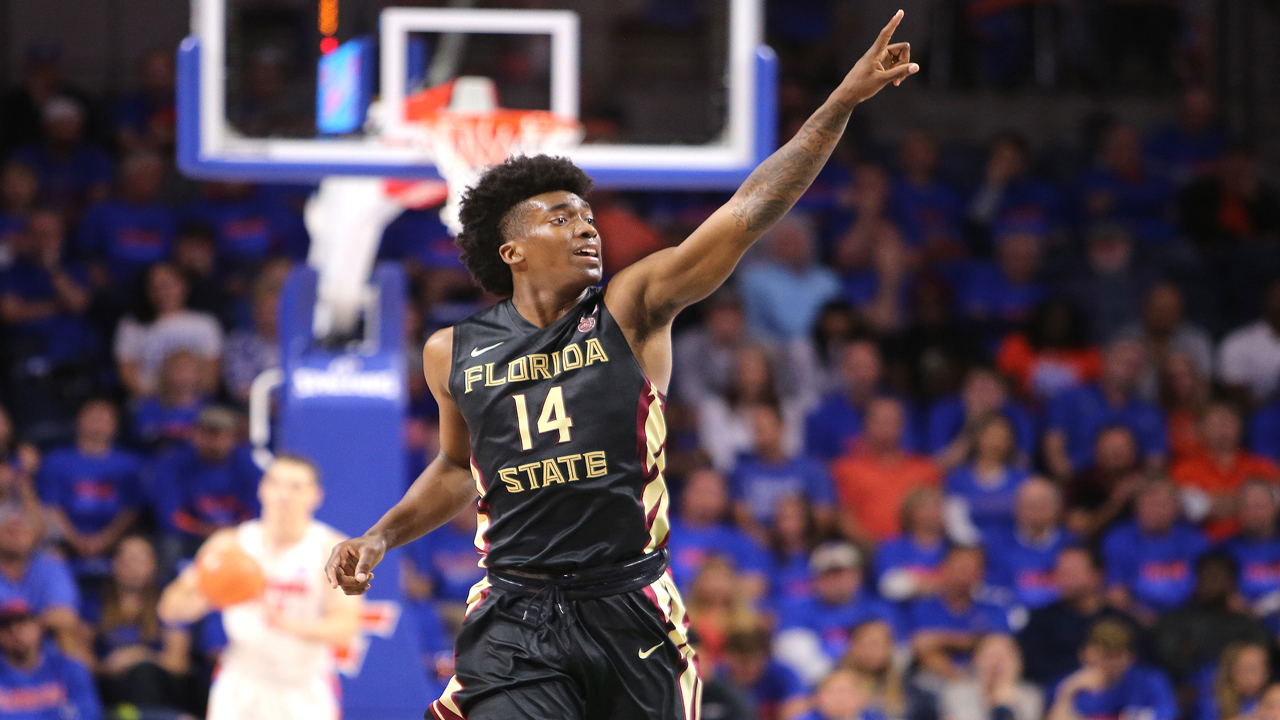 It always feels good to beat a rival. But to do it for four consecutive years feels even better. Florida State's decisive 83-66 victory at fifth-ranked Florida earlier this season extended the Seminoles' winning streak to four -- their most in the 68-year history of the rivalry. The Gators entered the game with the nation's top offense, averaging 99.6 points per game. Instead, the Seminoles forced the Gators into committing 17 turnovers. In a rivalry that has been mostly lopsided (the Gators own the all-time series 43-25 and had previously won 12 of 16 before the streak), the importance of having sustained success can't be overstated.

The Seminoles made history on an unsuspecting evening in Tallahassee, knocking off top-ranked and previously undefeated Duke (10-0), 77-76. It was Florida State's first-ever victory over a No. 1-ranked team. The home fans who happened to be present, if for no other reason than to drink beer and see the defending national champion in action, were treated to a rare storming of the court. It was also the highlight of the season. Duke handily won the rematch, 80-49, one month later and would only lose three more games all season. Conversely, the Seminoles only won four more games the rest of the season and finished with a losing record for the fourth straight year. Florida State has shown plenty of patience with its coaches through the years, but after five seasons under head coach Steve Robinson, he was shown the door, paving the way for the next chapter of FSU basketball. 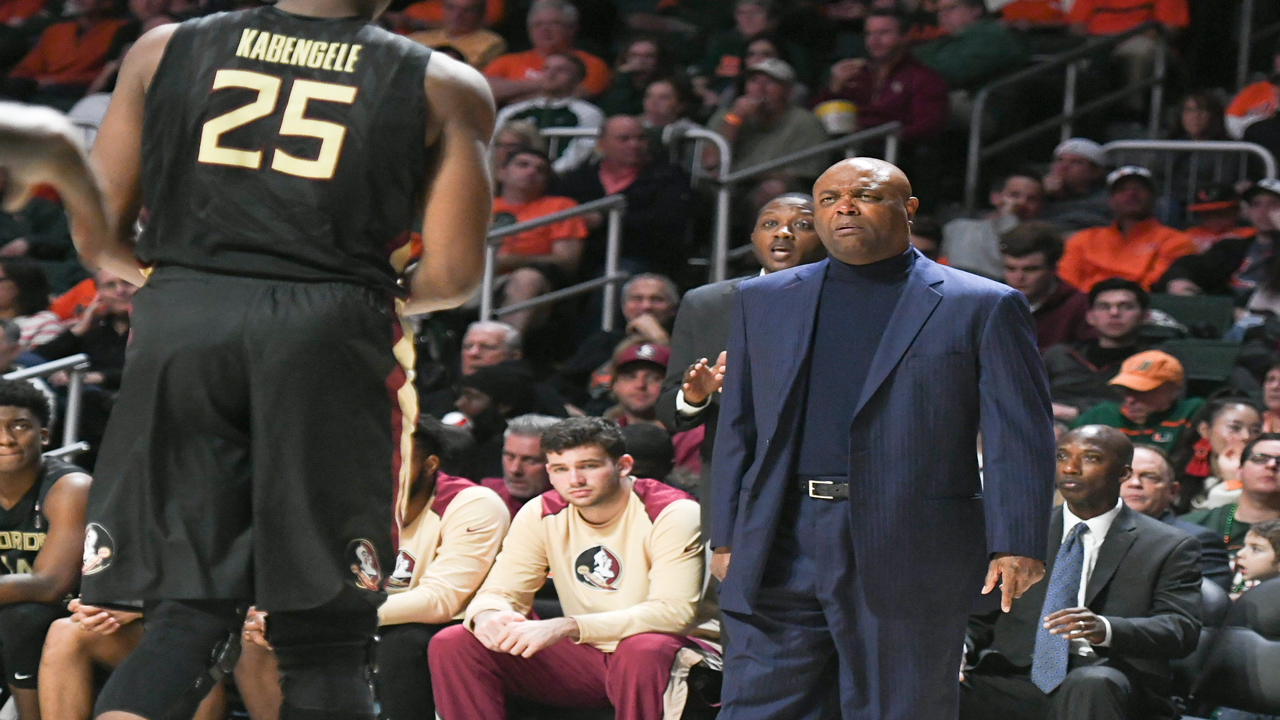 After a brief stint in the NBA, Leonard Hamilton returned to college as the next head coach of Florida State's basketball team in 2002. Aside from his 19-63 record with the Washington Wizards, Hamilton left his mark in previous stops at Oklahoma State and Miami. His charge at FSU was to restore order to a program that had slumped through four losing seasons and failed to build upon the success of an Elite Eight appearance in the early days of the ACC.  It's hard to argue with the results. By his second season, Hamilton had put together the nation's No. 1 recruiting class and had the Seminoles playing in the National Invitational Tournament. Under Hamilton's tenure, the Seminoles have had 13 consecutive winning seasons, made seven NIT appearances, six NCAA tournament berths and compiled an overall record of 327-207. Hamilton's 327 wins are the most of any coach in program history.

Football may have been the overriding reason for Florida State joining the ACC, but the Seminoles almost immediately put the rest of the league on notice that they would be legitimate contenders in basketball. The evidence came in a stunning upset of fifth-ranked North Carolina, 86-74, in Chapel Hill. Behind a starting lineup of Sam Cassell, Rodney Dobbard, Chuck Graham, Andre Reid and eventual Heisman Trophy winner Charlie Ward, the Seminoles carried a 46-39 halftime lead into the locker room and never let their foot off the gas. Cassell led the team in scoring with 22 points. Graham and Ward were close behind with 19 and 18 points each, respectively. Just in case anyone thought it was a fluke, FSU ended such thoughts with a 110-96 win in Tallahassee a few months later. The Seminoles finished second in the ACC with an 11-5 record, earning head coach Pat Kennedy coach of the year honors. 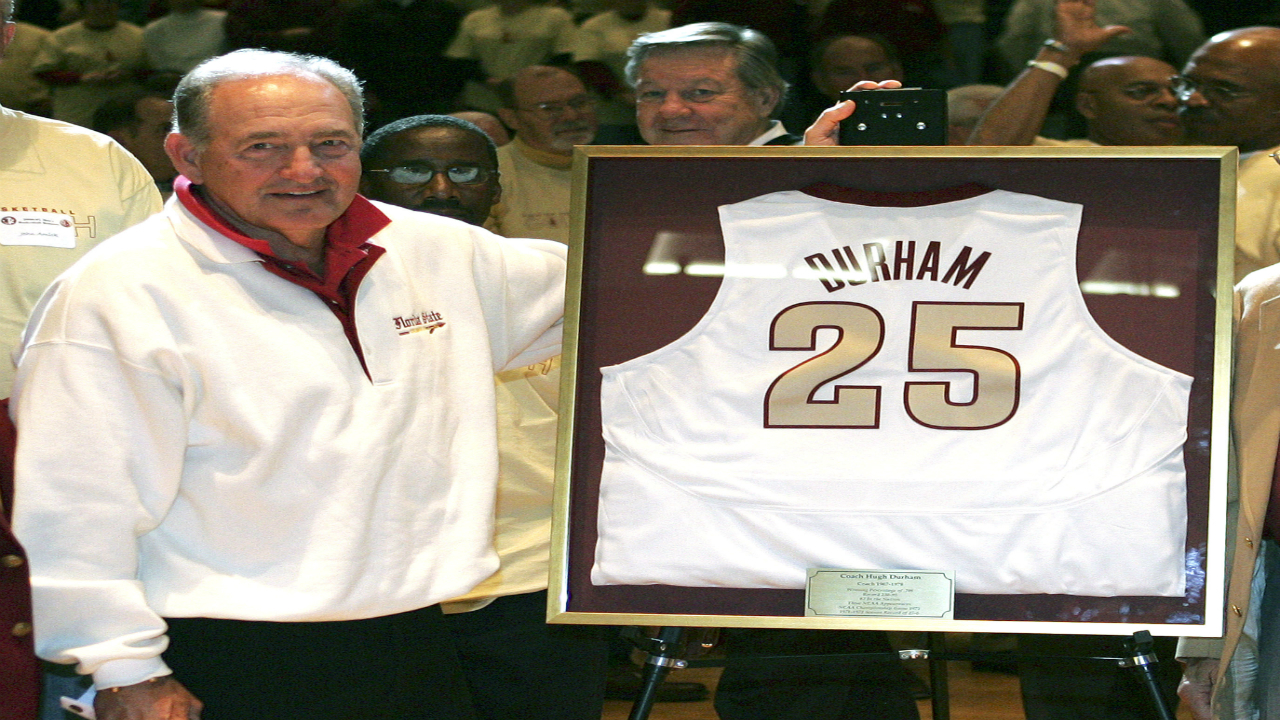 After starring at and graduating from Florida State in 1959, Durham was hired by head coach Bud Kennedy to serve as one of his assistants. Durham spent eight seasons under Kennedy before he was elevated to head coach for the 1966-67 season. He was just 29, making him one of the youngest head coaches in NCAA Division I basketball history. In 12 seasons at FSU, Durham had just one losing season -- his first -- and compiled a 230-95 record at his alma mater. The Seminoles also went to three NCAA tournaments, reaching the championship game in 1972. Durham was lured away to Georgia after the 1977-78 season, but he left the program in a better place than when he took over and laid the foundation for FSU's basketball future.

This likely would have ranked at the top of the list, were it not for the fact that Florida State lost. The Seminoles got all the way to the national title game before falling to the John Wooden-coached UCLA Bruins on their home court. Led by star player Ron King, who scored a game-high 27 points, the Seminoles rallied from a 67-51 deficit at one point to pull within seven, but UCLA's offensive firepower was too much for FSU to withstand, losing 81-76. To get there, the Seminoles had to dispose of Eastern Kentucky, Minnesota, Kentucky and North Carolina in the NCAA tournament. For the Bruins, it was business as usual. The win capped off a 31-0 record and sixth straight national championship. The Seminoles finished with a 27-6 record -- still the best season in school history. 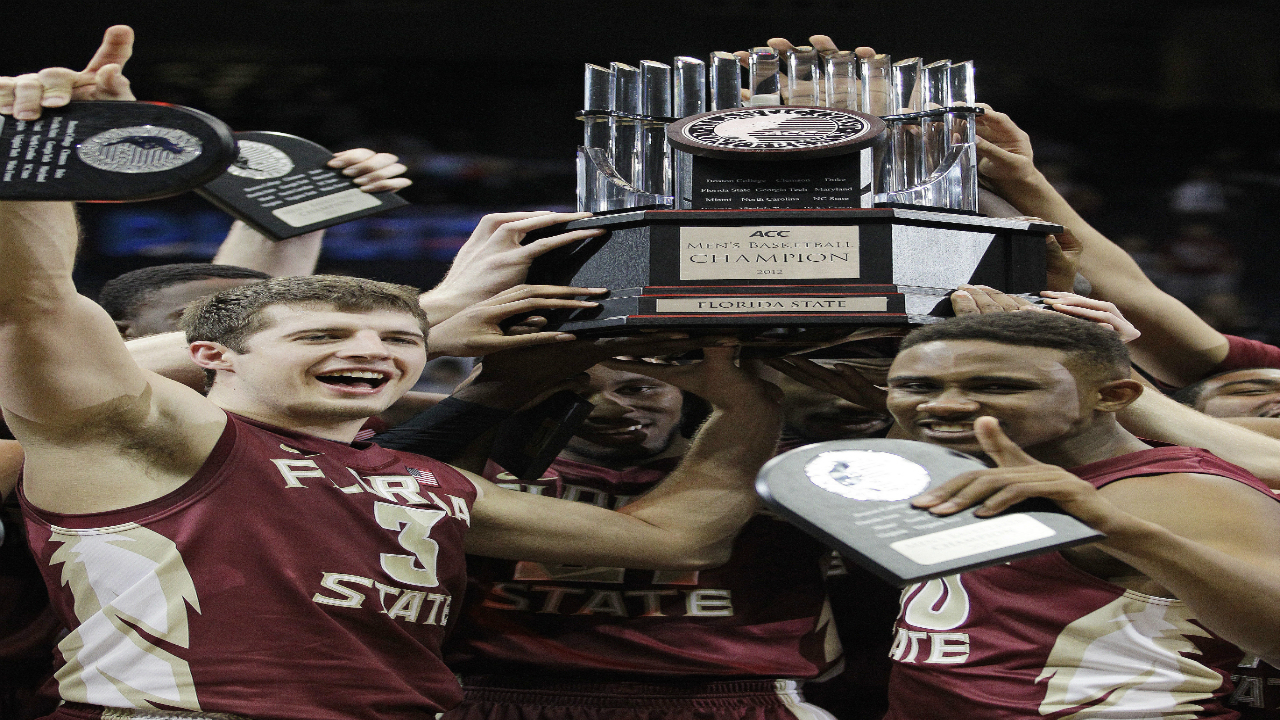 The Seminoles knocked off North Carolina 85-82 to claim their first and only ACC championship in school history. To win the crown in arguably the toughest conference in the country is an impressive feat for a football school. Beating traditional powers Duke in the semifinals and UNC in the title game was even more validation. The Seminoles, who were 12-4 in ACC play to earn the No. 3 seed in the ACC Tournament, used a barrage of 3-point shots to seal the win. FSU was 11 of 22 from 3-point range, which turned out to be the difference. The Tar Heels, who earned the top seed in the tournament with a 14-2 record, were just 5 of 20 from beyond the arc. Michael Snaer led the Seminoles with 18 points and made all three of his 3-pointers, while Deivdas Dulkys was 3 of 7 from long range in a 16-point performance.