Tropical update: What’s left of Barry continues to move north through Louisiana, but it’s still producing very heavy rain, which is spreading into Arkansas, Tennessee, and the midsouth.

The corridor of tropical rain will continue to cause tornadoes, local flash floods in Louisiana and Mississippi.

In addition, very serious river flooding is still expected in parts of Louisiana. All of the water falling from the sky has to eventually flow south.

Elsewhere, nothing is expected to develop in the tropics this week. 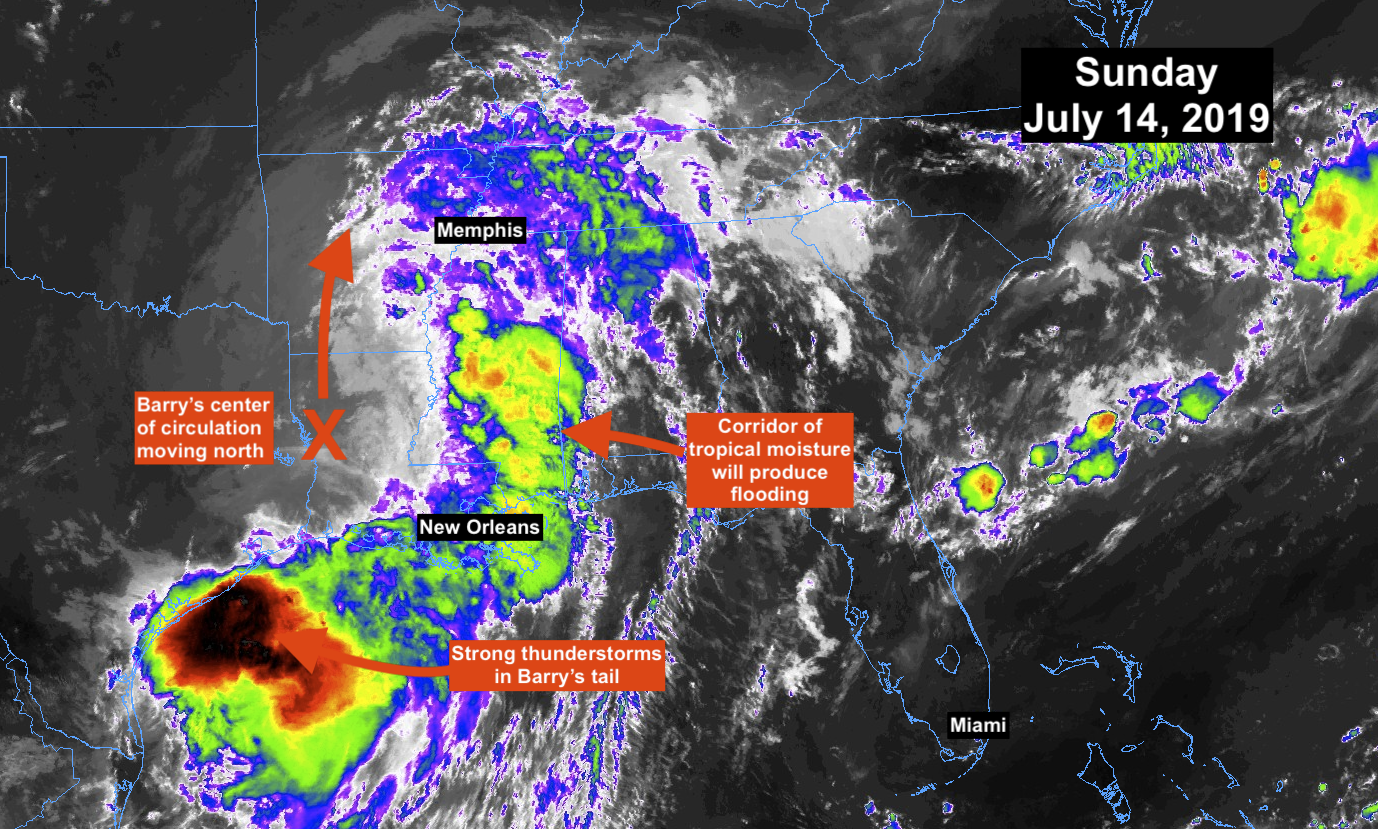 The center of a weakening Barry is moving north through Louisiana and will eventually move into Arkansas as the circulation spins down.

The large mass of tropical moisture will continue to stream north across Louisiana and Mississippi Sunday, spreading into the Midsouth,  Midwest, and by midweek, it will increase rain chances in the Northeast.

The location of the center of the system is not important at this point.  The corridor of heavy tropical rain over Louisiana and Mississippi contains embedded downpours, which are producing local flash flooding.  Also, some of the cells may contain tornadoes.  In addition, the onshore flow of gusty wind off the Gulf is still producing storm-surge flooding in some coastal sections of Louisiana. 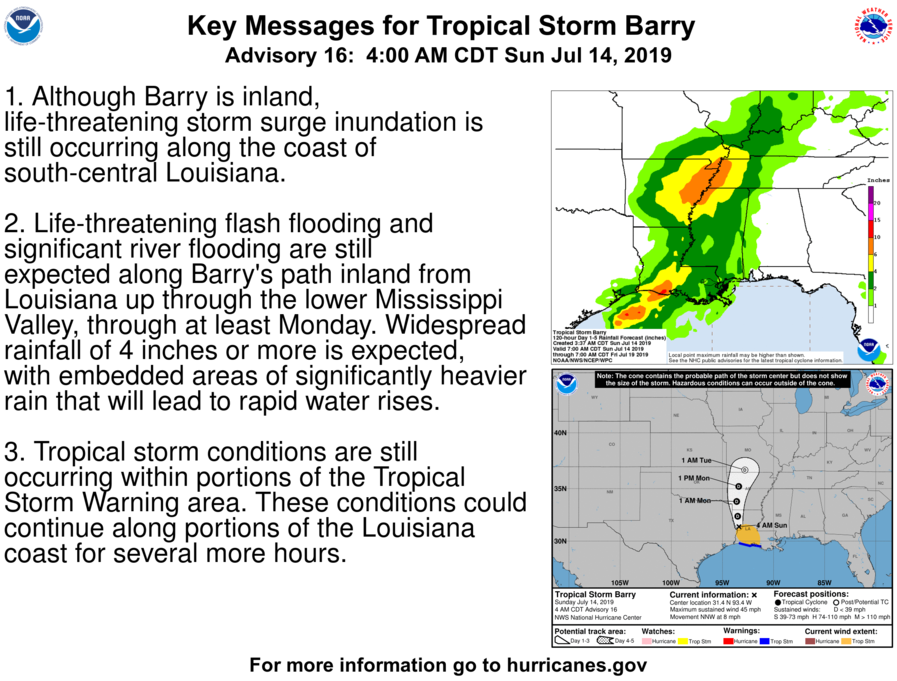 Some of the tropical moisture loosely associated with Barry is also affecting the Texas coast with gusty winds and heavy rain.

The issue over the next few days is that the water falling from the skies has to drain south, eventually to the Gulf of Mexico.

Rivers in the Baton Rouge area are still forecast to reach at or near Major Flood Stage, most in the Tuesday or Wednesday time frame.  Everybody in these areas should listen for evacuation orders from local officials.

Elsewhere, the tropical Atlantic is covered with Saharan dust, which we can see in South Florida in the hazy skies.  Strong tropical waves are coming off of Africa, but the dust and unfavorable upper winds over some parts of the tropics are killing them off. 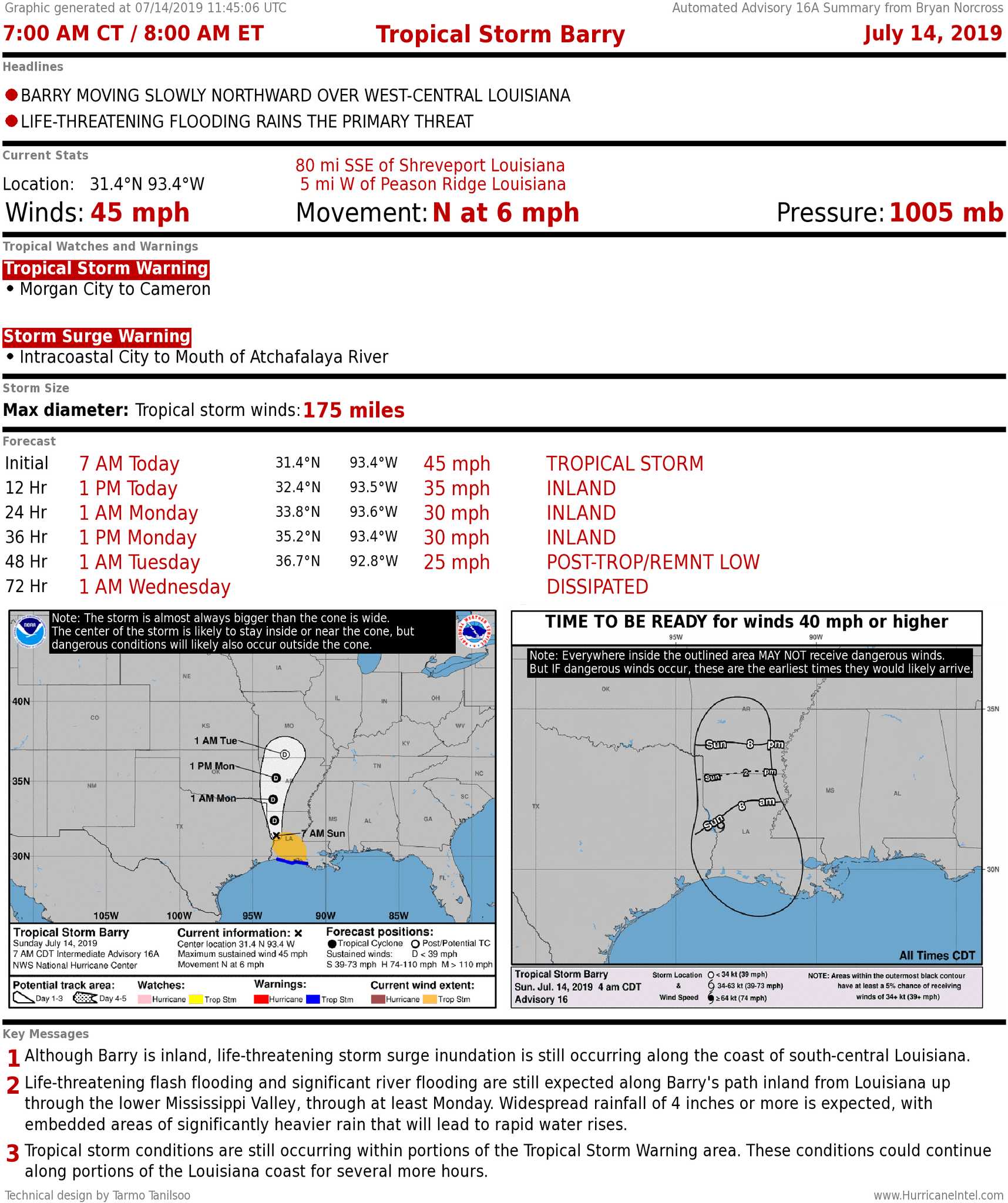