All of South Florida in forecast cone as Hurricane Dorian strengthens

Much of Florida remains in cone as some uncertainty remains

Hurricane Dorian is forecast to be a very strong hurricane at the Florida coast over the weekend. For South Florida, reasonable possibilities bring it too close for comfort.

Dorian continues to churn in the Caribbean. At 5 a.m., the storm's winds were 85 mph and was moving northwest at 13 mph.

FLORIDA, THE SOUTHEAST U.S., & THE BAHAMAS:  Dorian is expected to strengthen quickly and significantly as it tracks parallel but offshore of most of the Bahama islands. All of the northwestern Bahamas, especially Grand Bahama and Abaco, will have to monitor future forecasts carefully.

A blocking high pressure system is expected to deflect Dorian toward Florida, but there is some uncertainty if the block will remain in place, forcing the strong hurricane all the way to the state. If the western nose of the high weakens, as some computer forecast models suggest, Dorian may turn north and Georgia or the Carolinas could be affected.

Another possibility is that the eventual turn to the north happens after Dorian makes landfall in Florida, or right along the Florida coast. The European model, for example, moves Dorian across Florida and toward the northern Gulf coast. If, on the other hand, the blocking high is stronger than forecast, Dorian would be pushed south, closer to left side of the cone and South Florida.

The bottom line is, we have confidence that it will turn north. But we don't know when that turn will take place in relation to the east coast of Florida.

The National Hurricane Center cone covers most of the Florida and Georgia coast, but the uncertainties are such that all of Florida should be on aware of the latest forecast. The Keys, for example, are just out of the cone, but could be significantly affected by a hurricane tracking over the peninsula.

Everybody in the Keys needs to be aware of instructions from local officials.

CLICK BELOW to get LIVE real-time information on Hurricane Dorian

It's not hard to imagine scenarios where a strong Hurricane Dorian comes close to South Florida this weekend. Although many computer model forecasts take it north of South Florida, not all do.

Similarly, the various computer models that forecast the intensity of the storm when it reaches the vicinity of the Florida coast vary tremendously. The National Hurricane Center is now forecasting a Category 3 hurricane, but given the intrinsic uncertainty, a stronger storm is possible, as some models indicate. A weaker storm is possible as well, though a dramatically weaker storm seems less likely. 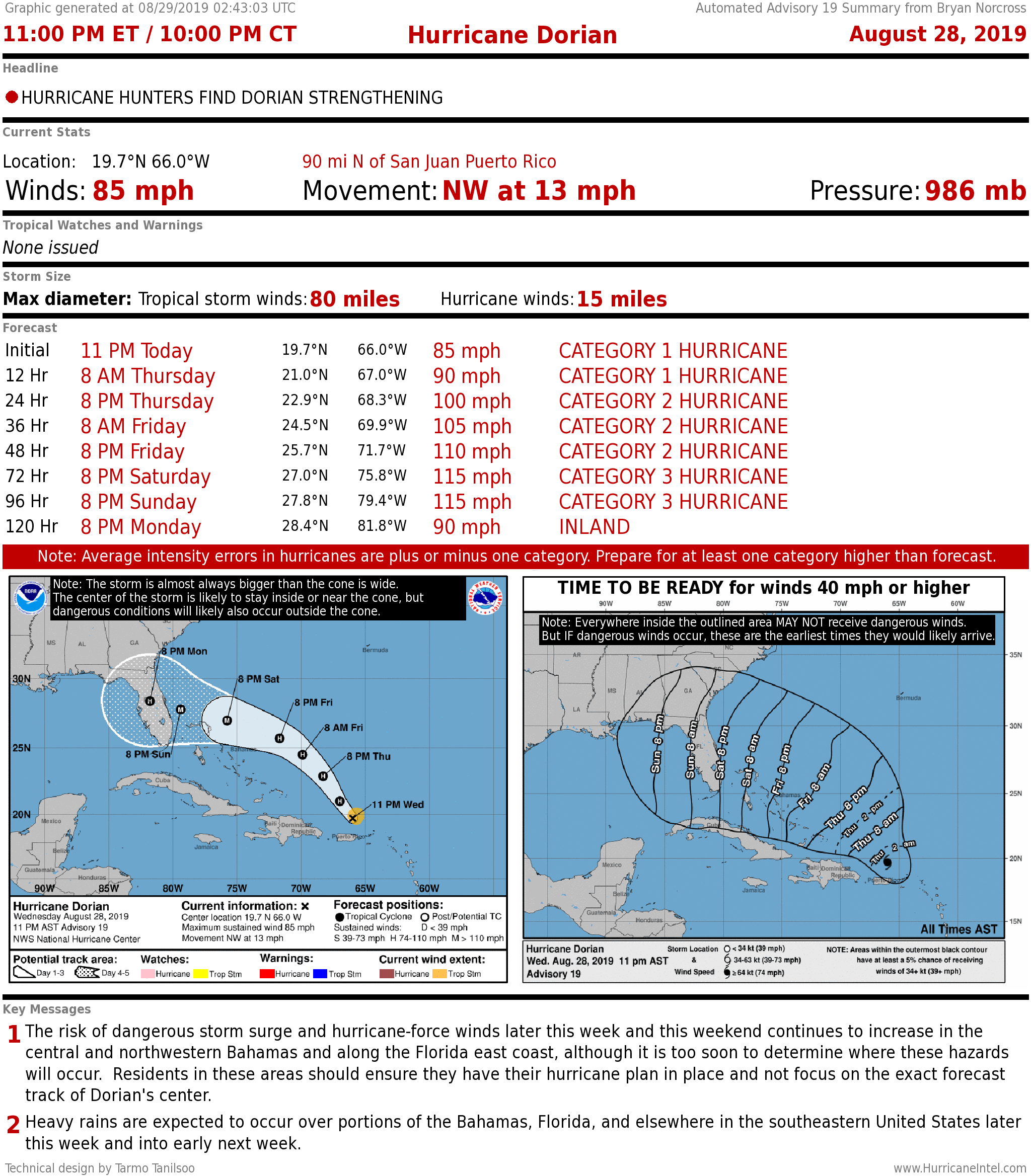 THE VIRGIN ISLANDS AND PUERTO RICO: Hurricane Dorian is moving past the Virgin Islands and brushing eastern Puerto Rico. Some dangerous weather is still possible on these islands. The effects in the Dominican Republic will more likely come late tonight into Thursday as the storm slides by to the north.

Strong wind gusts and heavy rain are still possible on Vieques, Culebra, and the Virgin Islands – just to east of Puerto Rico. Flash flooding and landslides are also a possibility on all of the islands with high terrain.

The center of Dorian and the worst weather will be past the islands tomorrow, brushing the Dominican Republic as the storm heads into the Atlantic.

Here are the key messages about Dorian from the National Hurricane Center:

2. The risk of dangerous storm surge and hurricane-force winds later this week and this weekend continues to increase in the central and northwestern Bahamas and along the Florida east coast, although it is too soon to determine where these hazards will occur. Residents in these areas should ensure they have their hurricane plan in place and not focus on the exact forecast track of Dorian's center.

3. Heavy rains are expected to occur over portions of the Bahamas, Florida, and elsewhere in the southeastern United States later this week and into early next week.

Elsewhere, Tropical Storm Erin is weakening off the coast of North Carolina. It is forecast to track north well offshore of the East Coast, but may provide moisture for very heavy rain in coastal New England, and impact Atlantic Canada late in the week.

Otherwise, some tropical waves are expected to move off the coast of Africa that may eventually have to be watched, but nothing else threatening is expected to develop in the tropics through the weekend.