PEMBROKE PARK, Fla. – New Tropical Storm Jerry is forecast to be a hurricane when it tracks near the northern Caribbean islands late this week. The remnants of Tropical Storm Imelda are drenching Houston and the surrounding area. Hurricane Humberto impacted Bermuda Wednesday. There are two other disturbances to watch.

TROPICAL STORM JERRY is more than 900 miles away from the northeastern Caribbean islands, tracking in that general direction. The National Hurricane Center is forecasting Jerry to be near or just north of the islands at hurricane strength late Friday and Saturday, so all residents in the northern and northeastern islands should stay informed.

A tropical storm watch has been issued for St. Maarten, St. Martin and St. Bathelemy. At 11 p.m, Jerry had maximum sustained winds of 65 miles per hour and was moving toward the west-northwest at 15 mph. A west-northwest motion at a slightly faster forward speed is expected over the next few days. On the forecast track, the center of Jerry will be near or north of the northern Leeward Islands Friday and pass north of Puerto Rico on Saturday.

Atmospheric conditions are not ideal for Jerry to get too strong, but these factors don't point strongly one way or the other. Just taking average forecast errors into account, there is room for Jerry to intensify significantly more. 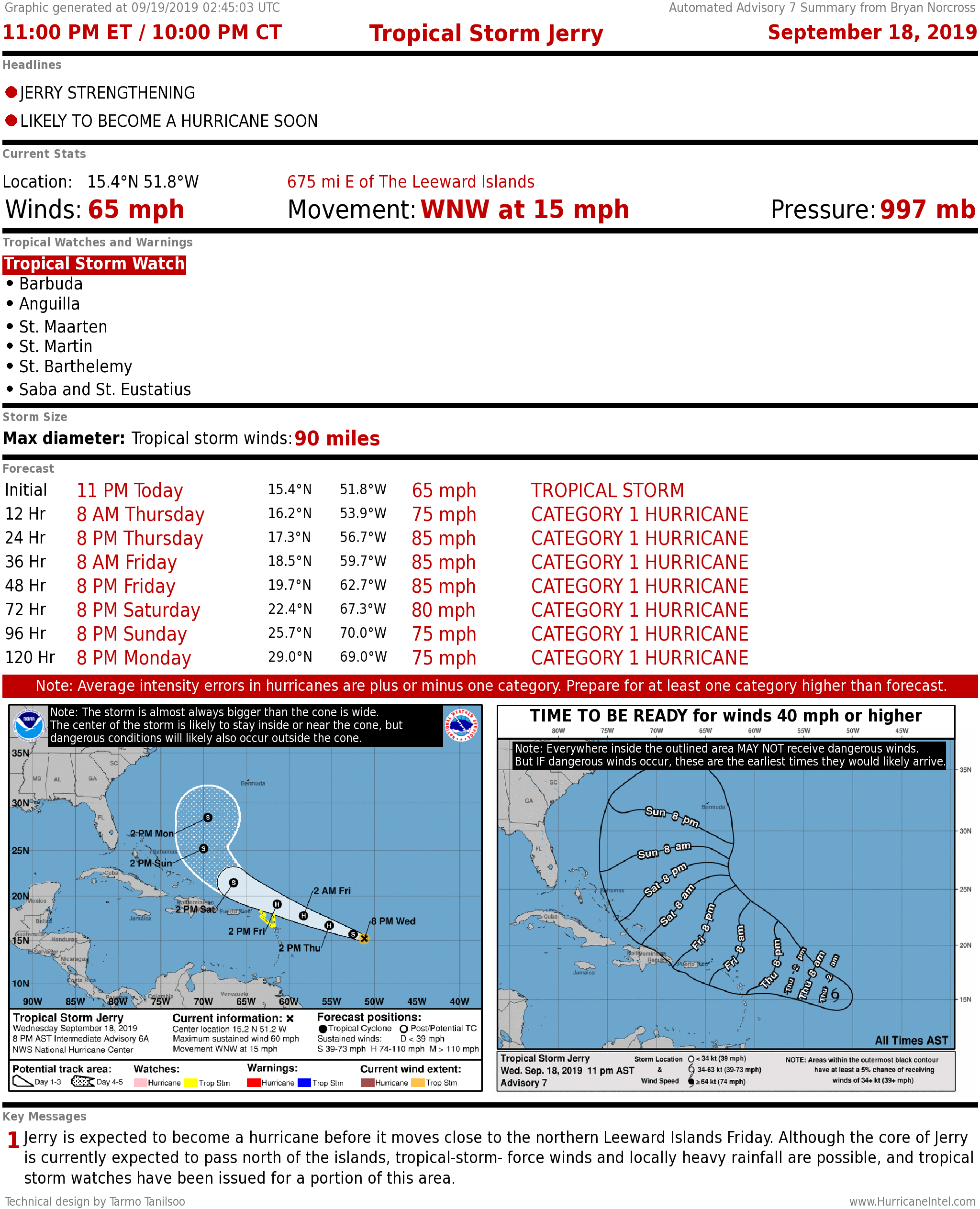 Late in the weekend we will see if Jerry starts to turn to the north and follows Humberto out to sea. At this point, the computer-forecast-model consensus and the National Hurricane Center forecast is that the storm will turn north before it gets to the Bahamas.

There is some uncertainty because the strength of the storm and the track it takes are interrelated. Quite often, weaker systems come farther west because they track with the trade-wind flow, which is generally east to west. Stronger systems are more likely to respond to dips in the jet stream higher in the atmosphere. Those dips can deflect strong systems north.

It looks reasonable that Jerry will track north of the Caribbean islands and turn out to sea, but let's remember that forecasts for developing storms are subject to more changes than systems with well-developed circulations.

HURRICANE HUMBERTO will pass near or over the island of Bermuda by Wednesday night. It will be a very close call. Humberto has grown into a large hurricane, so very strong winds and extremely high surf are guaranteed, but whether the worst conditions in the eyewall will pass over the island or stay just offshore is unknowable.

Humberto will continue to cause dangerous ocean conditions along the U.S. East Coast and in the Bahamas for another couple days. 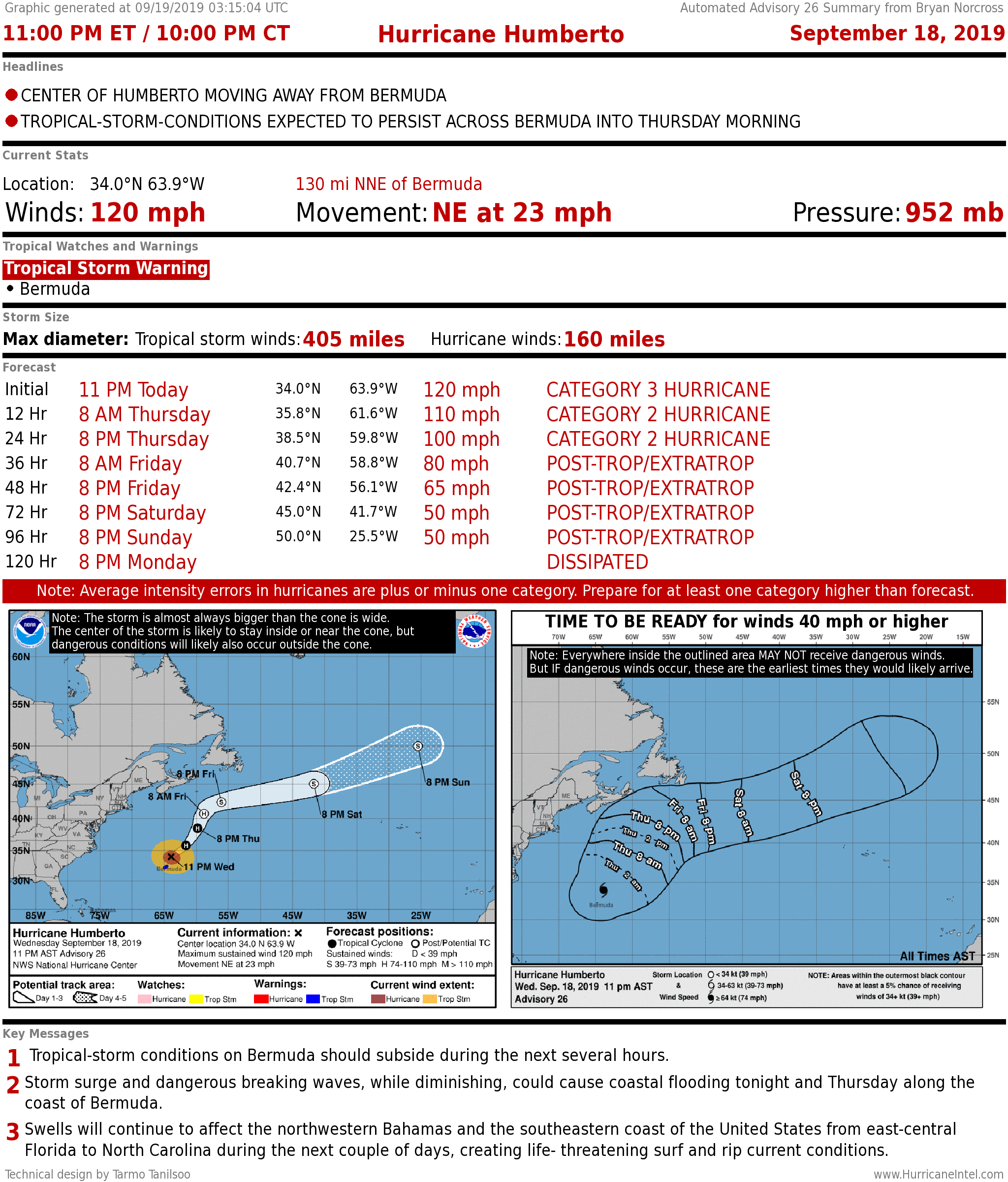 Later Wednesday, the weather in South Florida will be noticeably affected by Humberto. Temporarily, cooler and drier air will be pushed south on a stiff breeze. The humid air will quickly return later in the week, however.

EX-TROPICAL STORM IMELDA has been downgraded to a tropical depression. That just means that the top winds are below 40 mph. The flooding threat continues for northeast Texas and southwestern Louisiana, including the Houston area. Widespread rainfall of 6 to 12 inches with some locations getting 18 inches is forecast.

The depression will creep inland over eastern Texas for the next couple of days.

ELSEWHERE IN THE ATLANTIC, Tropical Disturbance No. 1 is just east of Tropical Storm Jerry. It is quite weak and may not amount to anything for the next several days, but some computer forecast models show it developing in the Caribbean next week, so we'll have to keep an eye on it.

Tropical Disturbance No. 2 is forecast to move off of Africa on Thursday. Again, computer forecast models indicate that it could develop in a few days, so it will bear watching.

Betty Davis is the chief meteorologist for Local 10.  She provides weather forecasts for South Florida Monday-Friday during the 4, 6 and 11 p.m. newscasts.