Miami-Dade County Public Schools spokeswoman Jackie Calzadilla said there were additional police at the school Tuesday as a precaution.

Many parents were seen picking up their children from school early because of the threats.

The students were identified in their arrest reports as a 14-year-old boy and a 13-year-old boy.

According to the reports, the teens made the following threatening comments Saturday while the older teen was streaming on Instagram Live:

According to the 13-year-old's arrest report, he currently attends the Miami MacArthur Educational Center.

Police said no guns were found in the teen's home. The teen, who was arrested Monday, claimed his posts were a joke, authorities said. 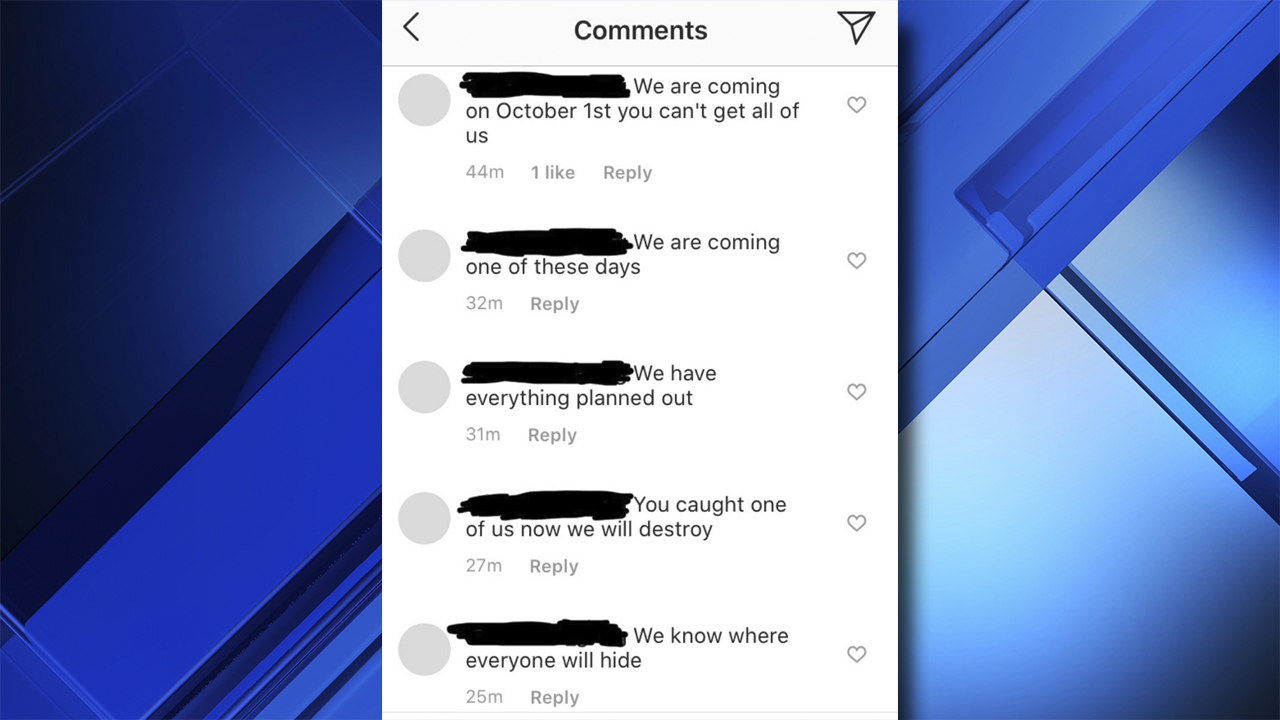 Other threats were reportedly made on the middle school's Instagram page.

"Some of the comments on the Instagram page read, "We are coming on October 1st. You can't get all of us," and "We have everything planned out."

Another comment read, "You caught one of us. Now we will destroy."

A man who told Local 10 News he's the father of one of the teens arrested tried to downplay the threats.

Students told Local 10 News reporter Glenna Milberg they were shocked when they read the threatening comments.

"I was looking through the comments and I saw these threats, and I was, like, 'Oh, my God,'" 8th grader Brielle Barnes said.

Parents told Milberg they were notified Monday about one of the arrests.

"They sent an email last night that there was a threat yesterday, you know, regarding a shooting or whatever," Eliete Pujol said.

"Most of the parents I talked to this morning, they were worried because they don't know. This is the first time in this school that this is happening," Gisele Sanabria said.

Language arts teacher Marcell Borgen said one of the boys who was arrested was in his class, but said the eighth grader had been out of school for the last few weeks.

"I only had him for a short portion of the year, so I can't call into his character. I can't say it's a guarantee that something's going to happen," Borgen said.

School district spokeswoman Daisy Gonzalez-Diego said the Miami-Dade Schools Police Department  is working to determine whether any additional students were involved in making the threats.

According to school district officials, M-DCPS has received 18 threats since the beginning of the school year, five of which have resulted in arrests.

"The Miami-Dade Schools Police Department works cohesively with local, state and federal law enforcement agencies in investigating all threats, including those made on social media platforms," Schools Police Chief Edwin Lopez said in a news release. "Our investigators are skillfully trained and equipped to identify those individuals who continue to knowingly and willfully commit this felony. We continue to urge parents, guardians and students to utilize social media responsibly."