3 warnings, 4 watches and 4 advisories in effect for 10 regions in the area

3 warnings, 4 watches and 4 advisories in effect for 10 regions in the area

Miami-Dade boy who vanished a month ago warned mom: ‘Bad people trying to take me away’

Broward town running out of time, options to avoid being left with no cops on street

MIAMI – Six police officers suffered injuries early Tuesday in shootouts with two men, both of whom were killed.

The officers were taken to Jackson Memorial Hospital. The first officer was shot in the abdomen and underwent surgery, said Miami-Dade Police Director J.D. Patterson.

"Thank God it was not a life-sustaining organ that was penetrated but he did have some internal injuries," he said.

The officer who was shot in the stomach was listed in stable condition, said Det. Alvaro Zabaleta.

The other two Miami-Dade police officers were shot in their arms. They were released from the hospital later in the morning, said police spokesman Javier Baez.

"We're very fortunate, very lucky that today was not another tragic day for this community," said John Rivera, president of the Dade County Police Benevolent Association. "We got to see today how mean the streets of Miami really are and how mean they're getting."

A robbery at a Walgreens at West Flagler Street and 27th Avenue led officers to the 2200 block of Northwest 27th Avenue, where the first officer was shot about 5 a.m. Investigators believe the suspect then took off in the officer's marked unit and abandoned it in Hialeah, said Maj. Nancy Perez.

Officers and two suspects then exchanged gunfire at Northwest 64th Street and 26th Avenue (pictured below) -- where the two officers were shot in their arms -- about 6:30 a.m., said Patterson. Dozens of bullets pierced the blue Volvo convertible the men were inside. 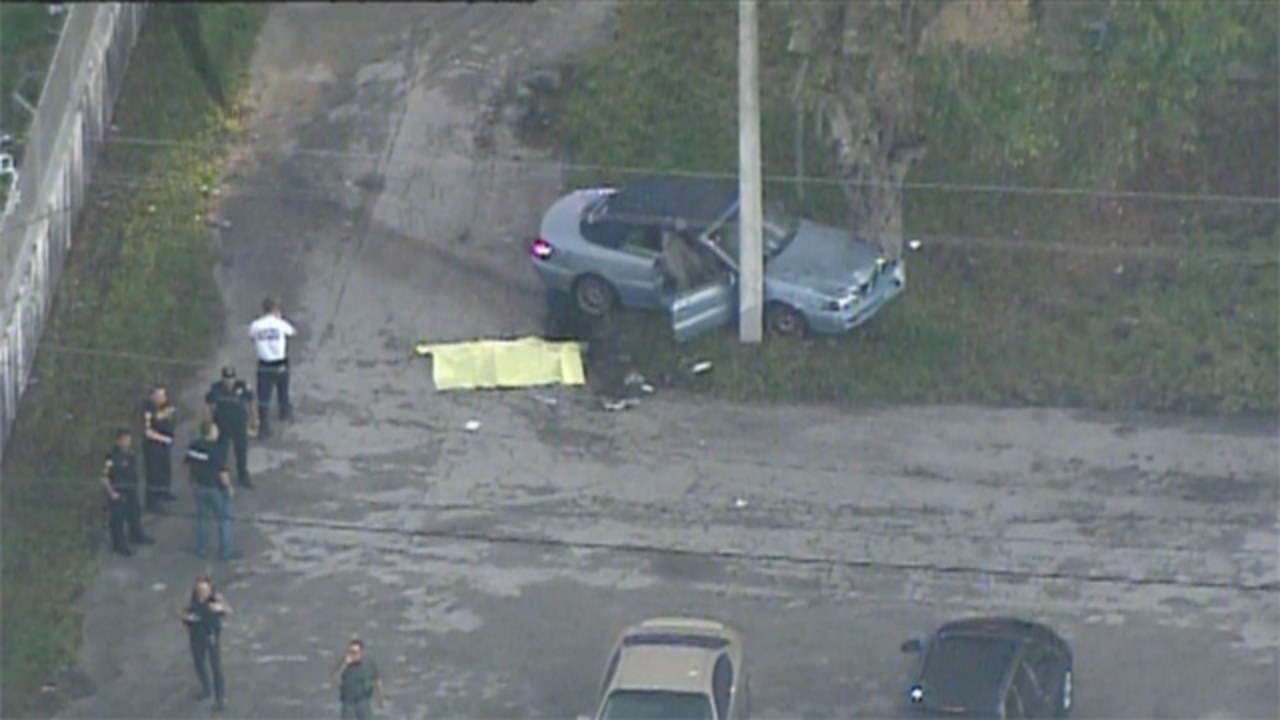 "It sounded like World War III out here," said Tracey Addison, who was getting off the MetroRail when she heard gunfire nearby. "They were shooting at the cops and the cops just shot the whole car up."

One of the suspects was killed and the other was transported to Jackson Memorial Hospital, where he died.

"We do believe that the gentleman that was in this car -- one of them -- was the in fact the person who took the police car and shot our officer," said Patterson.

It wasn't known whether both suspects had been at the scene of the first officer's shooting, or if one joined the other after the patrol car was abandoned, said Perez.

Friends identified one of the men as 27-year-old Adrian Montesano (pictured below). The Volvo was registered to his family.

Police haven't identified the officers or the suspects.

The two Miami police officers complaining of ear aches because of their closeness to gunfire during the second shooting were transported to Jackson Memorial Hospital as a precaution, according to a department spokesperson. A fourth officer from the Hialeah Police Department was injured by broken glass.