Miami-Dade reopens parks, but not all its cities will

The US reopening is coming, but 'normal' is still a ways off

As Broward reopens parks, some cities discuss beaches next and others say they’ll wait

WASHINGTON – During a Tuesday meeting at the White House, Gov. Ron DeSantis and President Donald Trump took turns to hold up a sign: “Florida’s actions to protect residents in nursing homes and assisted living facilities.”

The list included suspending visitations and deploying teams to assess and support long-term care facilities. The Florida Department of Health has yet to release a detailed report on the deaths at these facilities.

“We’re offensive with the nursing homes,” DeSantis said. “Nothing is going to change on the nursing home testing. This is until this virus goes away. This is the population that is most at risk." 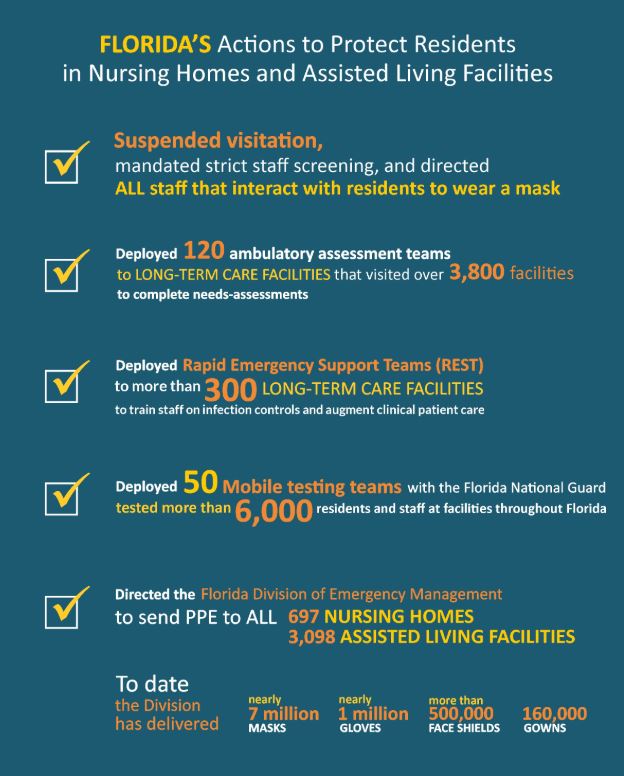 DeSantis said in Florida close to 85% of the fatalities have been people age 65 or older. According to the Kaiser Family Foundation’s analysis of government data, 27% of the coronavirus deaths in Florida are related to long-term care facilities.

“There were times when some of the facilities didn’t follow the regulations ... you could have a staff member that was just simply asymptomatic, and then it would spread amongst the staff,” DeSantis said, later adding, that “In a nursing home situation, if that starts getting out, man, that is a perfect environment for this virus to just start spreading. I mean, it can spread like wildfire, very quickly.”

Florida has also faced challenges with travel-related cases. DeSantis said he has been worried about Brazil and some of the hot spots which have a lot of interaction with Miami.

“You’re going to probably see the epidemic increase there as their season changes and so we could potentially be way on the other side doing well in Florida, and you could just have people come in,” DeSantis said.

DeSantis said he mentioned an idea to Trump about using the Abbott labs test, so airliners check passengers before they are getting on and coming to Florida.

Trump and DeSantis also discussed a travel ban related to Brazil -- one of the world’s new hot spots. Trump said a ban would be “cutting off Brazil” and DeSantis said, “Well, not necessarily cut them off, but it’s just if you’re going to fly to Miami, then the airlines should give you the Abbott test."

Trump also said, “Brazil has pretty much of an outbreak, as you know. They also went a different way than other countries in South America ... It’s certainly a very big thing to do to Florida because you have so much business from South America."

“If you look at our outbreak, not a lot of it is tied to that," DeSantis said. "It’s mostly tied to New York City ... the Orlando situation is worlds different than Palm Beach and Broward and Miami-Dade.”

Great meeting with President @realDonaldTrump at the @WhiteHouse discussing all things #COVID19 and FL's strong efforts to protect vulnerable populations & to expand testing in an innovative way. @POTUS & his administration have provided great support for FL each step of the way. pic.twitter.com/jNkndpVg1m

DeSantis also said Florida’s “tailored and measured approach” to dealing with the coronavirus has saved lives and kept the number of cases “way below what anybody predicted.”

The Centers for Disease Control and Prevention has confirmed 1,171 people in Florida have died of the coronavirus and 676 of those deaths were in Miami-Dade, Broward and Palm Beach counties, according to the Florida Department of Health’s Tuesday morning report.

Florida’s “primary outbreak was in Miami-Dade and Broward County, and Palm Beach, so they pushed tests into that region,” Birx said during the news conference. “We did the same thing in the United States.”

While the hospital capacity in Florida has been sufficient during the pandemic, the state government was not prepared to deal with the rising need for unemployment insurance benefits. Kudlow said the economy is in a deep contraction with rising unemployment.

“It’s a lot of hardships, a lot of difficulty,” Kudlow said. “The president’s rescue package, which really totals $9 trillion between the Treasury and the Fed, has helped to cushion that blow.”

Kudlow said the U.S. will take a hit, and reopening is necessary because people are anxious to go back to work and confidence needs to return with safety features and data-driven decisions. Kudlow also said Trump is looking into middle-class tax relief, middle-class regulatory relief, infrastructure development and insurance liability protections for small businesses.

Miami-Dade reopens parks, but not all its cities will

Miami-Dade County is taking its final steps to prepare for parks, marinas and golf courses to open Wednesday, but City of Miami and Hialeah won't be opening just yet.

The US reopening is coming, but 'normal' is still a ways off

Everyone wants to know when it will go back to normal.

As Broward reopens parks, some cities discuss beaches next and others say they’ll wait

Broward County is reopening parks, marinas and golf courses Wednesday, but not all cities are on the same page.